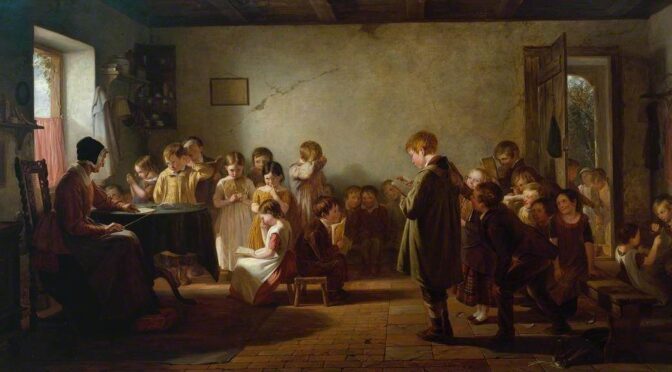 The earliest information we have about schooling in Burnham is that around 1800 there was a Sunday school run by Mr Locke, the Rector of Burnham. There were no doubt other such schools run at various times before and since.

Records of small ‘Dames’ Schools’ ( run by local  women charging a small fee for very basic education) and other private establishments begin to appear as the century wore on, alongside Burnham’s first ‘National School’ which appeared sometime shortly after 1811. Some of these were probably quite short-lived. The picture at the top of the page is ‘A Dame’s School’ by Thomas George Webster (1800-1886).

In 1840 two such schools are known in Burnham: Miss Bartlett’s Child’s School and Miss Gilling’s Ladies Boarding School. The latter was actually owned by Sarah Board and run by the occupier Ann Gilling. It was situated on Oxford St opposite the site of Ravensworth House.

There is a record in the Bridgwater Times in 1846 of a Mrs Swan moving her ‘Ladies Academy’ from Brunswick Terrace to larger premises in Prew’s Terrace (now Kinver Terrace).

By 1849 there were 4 daily schools known in Burnham and 4 in Berrow. Records of 1852 & 1853 show 4 schools in Burnham and the names of Sarah Daunton and Johanna Hardwick are associated with these. In May 1854 Mrs W. Marchent is recorded as resuming the duties of her school in Brunswick place.

The new ‘National School’ on the Esplanade was opened in 1857, funded by George Reed.

There is a record from 1859 of a Mr & Mrs Dudeny running ‘Sussex House Classical and Commercial Academy’. In the 1863 census  a Mr Gilbert Dudeny is recorded as living in and running the Academy  in a property in College St. It appears that this was in one of the buildings next to the Baptist Church.

Around 1860 Misses Jane and Eiza Tratt were running a school at Sydney House (No 2 College St). Mr Dudeney had also made improvements to his school:

By 1863 a June Hardwick is recorded as running a school in Alfred St (High St) near College St.  Ann  Hobbs also appears in  records as running a school nearby in College St at around the same time, in Alfred House on the site of the current Lloyds Bank . The Hobbs sisters possibly ran schools in other premises prior to this. James Lovibond was also operating an establishment on the East side of Victoria St.

St John’s Church School in Highbridge was built in 1863 catering for 360 pupils.

In 1891 The St Joseph’s Catholic School was opened in the grounds of La Retraite Convent.

Kelly’s directory records the Misses Weaver as running a preparatory school at Steart House in 1897 but this had gone by 1906. By this time the role of such small schools had been taken over by the larger private schools and the expanding state sector.

In 1906 the National School on the Esplanade was renamed St Andrew’s and in 1910 the infants classes moved out to an annexe in Princess St, replaced in 1914 by the purpose built Burnham Infants’ School.

See individual school pages for further details of the development of education in the town from the end of the 19th century onwards.

Information from research by Walter Strickland and by Winston and Robert Thomas (The Book of Burnham on Sea).

The list below is compiled from baptismal records and shows the names of some of the schoolmasters in Burnham during the period indicated.