A miscellany of work related items from Burnham and area.

A newspaper report of 1767 highlights one of the hazards of agricultural life: 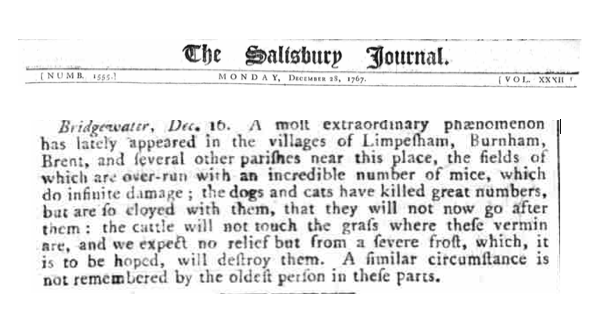 The county agricultural show was held at a different venue each year. In 1904 it was held in Burnham on land belonging to South Farm, where Shelley Drive and Coleridge gardens now stand. 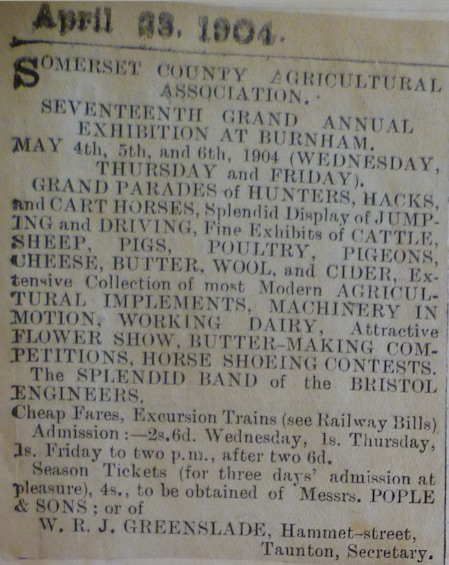 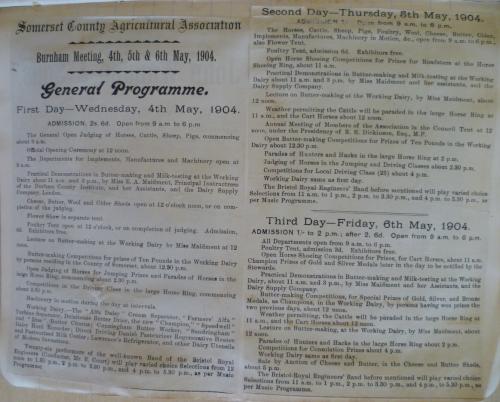 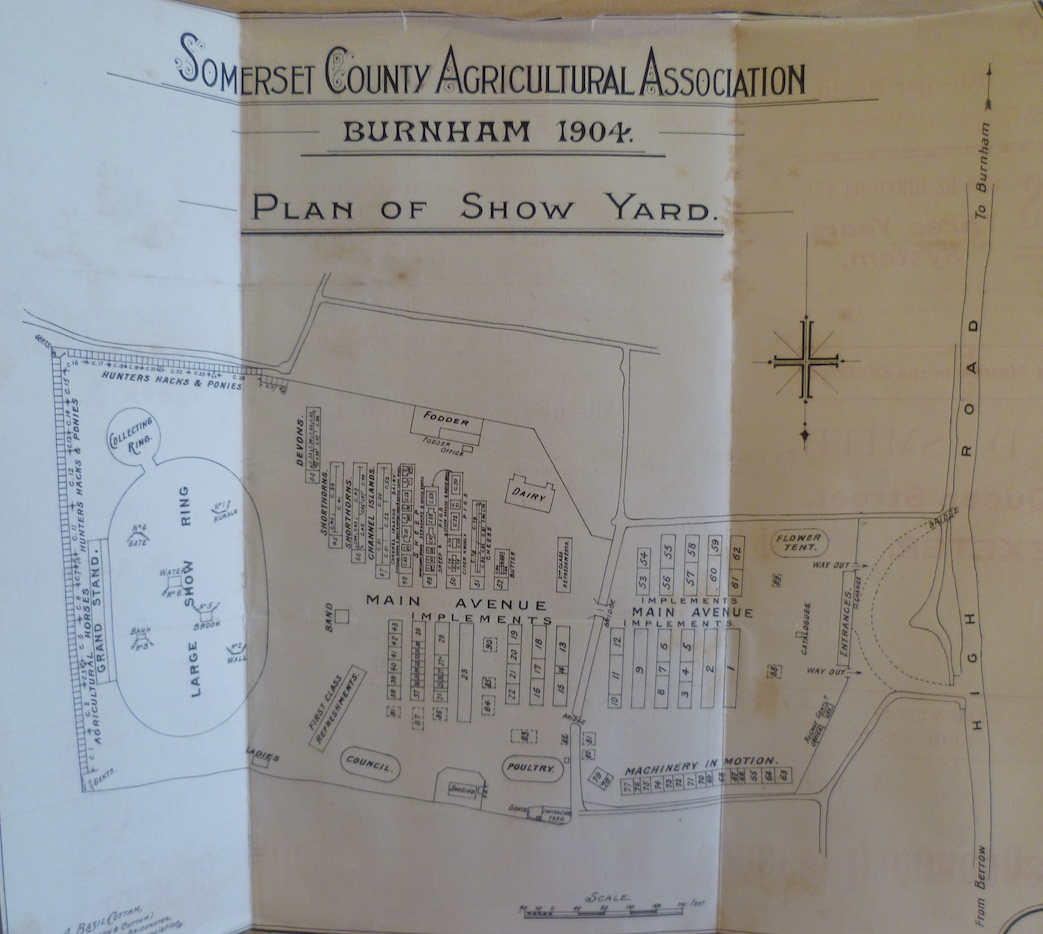 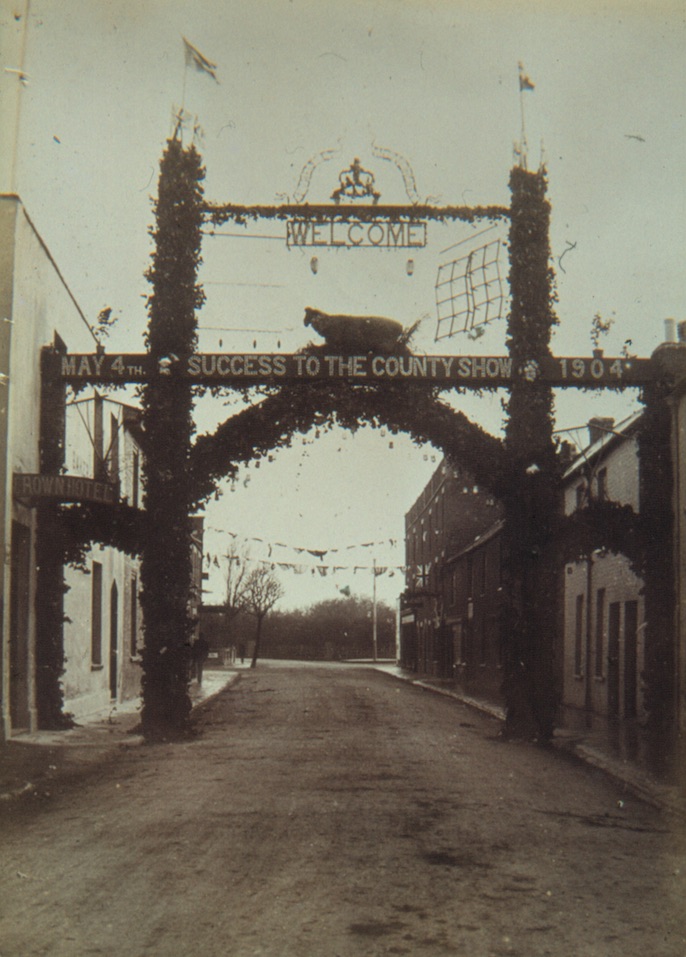 There were four ‘triumphal arches’ in the town celebrating the show. The one above in Oxford St outside The Crown Hotel, won joint first prize. Note the absence of houses at the Love lane & Manor Rd junction.

Below is a photo of one of Wensley’s name plates seen at Barrington Court. It is of the type seen in red on the item at centre left in the picture above. This is a ‘scratter’, a rotary mill with stone or jagged metal rollers. 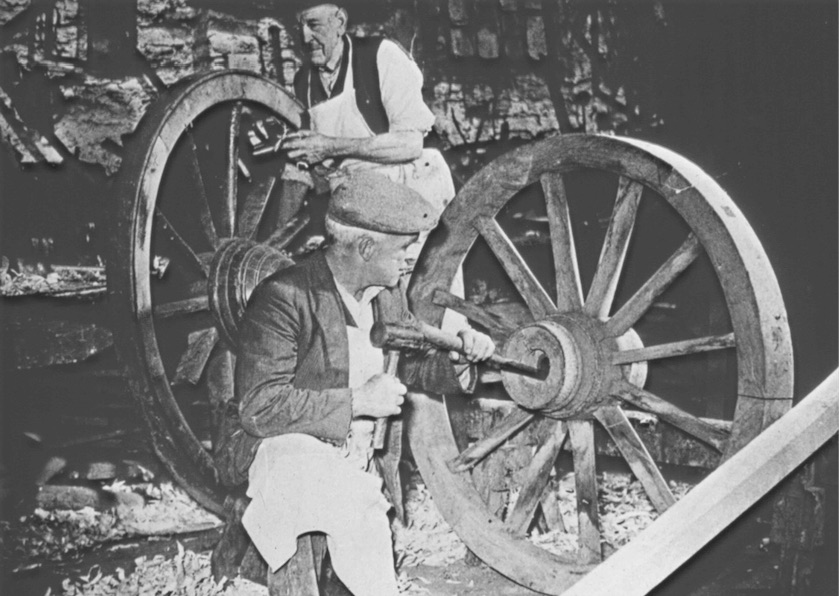 Another wheelwright / foundry in Mark was Day’s, on the causeway, run by Albert Day until his death in 1893 then by his sons. It seems it was later taken over by Wensley’s sometime during the 1920’s. One of their products can be seen in the next photo. 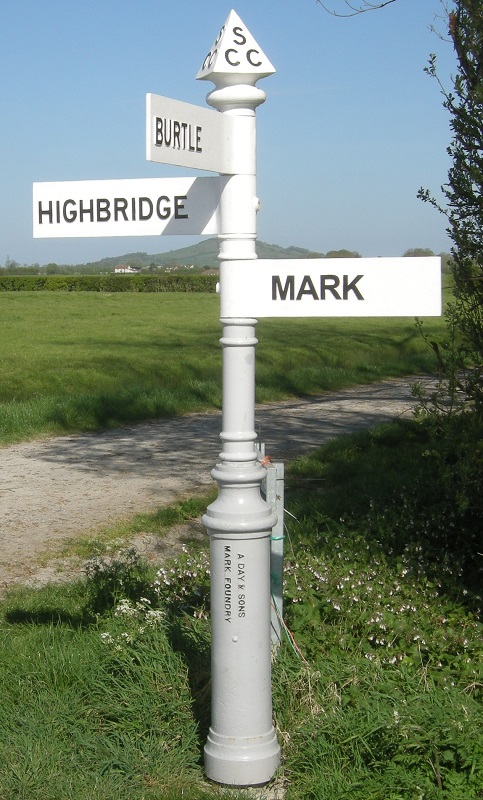 Day’s at Mark later became the ‘Foundry Garage’ which used premises at 4 Regent St, Burnham as a showroom under the same name for a time.

Further information about the commercial history of Mark can be found at https://www.markvillage.co.uk/village-information/history-of-mark/

Farming was thirsty work and consumption of cider was an important part of the daily refreshment. 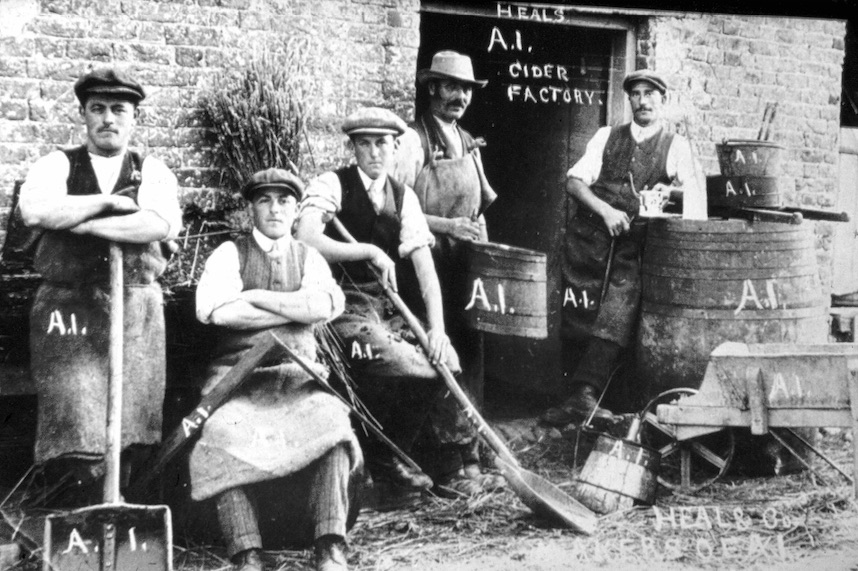 The text at the bottom of the photo reads ” Heal & Co Makers of A1″ (presumably their signature brew).

June Thomas says: “We are not sure which Heals are represented here but we do know that apart from several individuals who came and went, there were two farms which were  occupied by several generations of Heals in the Walrow area – Yew Tree farm and Ash House / Ash Tree Farm. The only other Heals were at Worston House and Bow Farm.”

Wilts United Dairies factory at Bason Bridge processed milk from most of the local farms and shipped it out by rail from Highbridge. 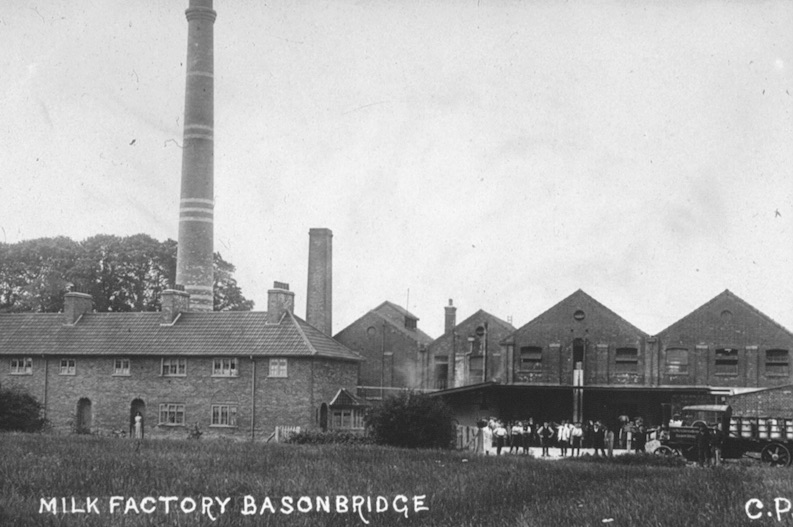 Postcard above by Charles Pearson shows factory in early part of 20th century. 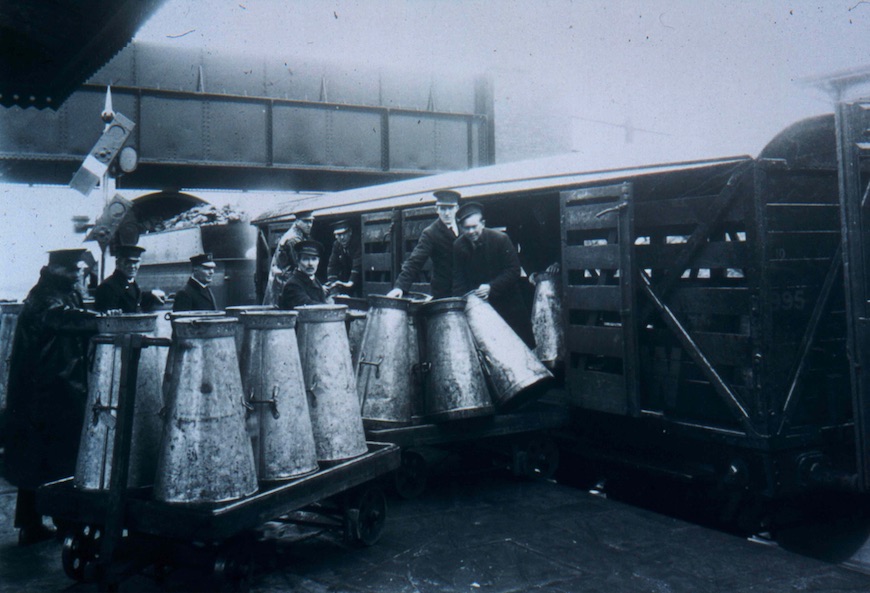 June Thomas says: “Before road or rail tankers had been invented, the milk was brought to the plant in churns on ordinary lorries and shipped out in a similar manner. Here we can see the churns being transferred to a railway wagon on the up line for transportation to Bristol, or more likely, London. For many years, this factory kept Wall’s Ice Cream factory supplied with milk.”

Des Parsons tells us: “Coming from a farming community (my dad worked on a farm at Edithmead for 52 years) I have a vague interest in the subject. The word churn comes from the wooden vessel that was used to turn milk into cheese and the name was kept when the vessels were used to transport milk. When milk started to be transported by rail, the wooden containers were still used. They held 17 gallons (77.3 Litres). About 1850 they were made of Galvanised Steel (some early ones were Brass, tinned.) These steel containers also held 17 gallons and became the standard measure and means of transport. Milk weighs about 8.6 lbs, so multiplied by 17 equates to 146.2 lbs (66.32 Kilos) plus the weight of the container which was not inconsiderable. The combination of the two made the full churn extremely heavy. When you see photos of churns stacked on top of each other they were most probably empty! They did start to make smaller 10 gallon steel cans which were easier to transport. 1930 saw the introduction of the aluminium churn with the top hat, sometimes referred to as the “mushroom”. This was much lighter to move about. This was used up to the 31st July 1979 when all collected milk in churns ceased and it was picked up thereafter in bulk tankers. Many farmers left their milk to be collected on stands at the farm gate. This would often start to curdle if left a long time in the hot sun. Farmers were often caught out for watering down the milk in an effort to make more money. I think they tested the milk with a Hydrometer to check the specific gravity to ascertain this?”

These women at the Dunball munitions factory are wearing the characteristic white protective clothing of World War I munitions workers. 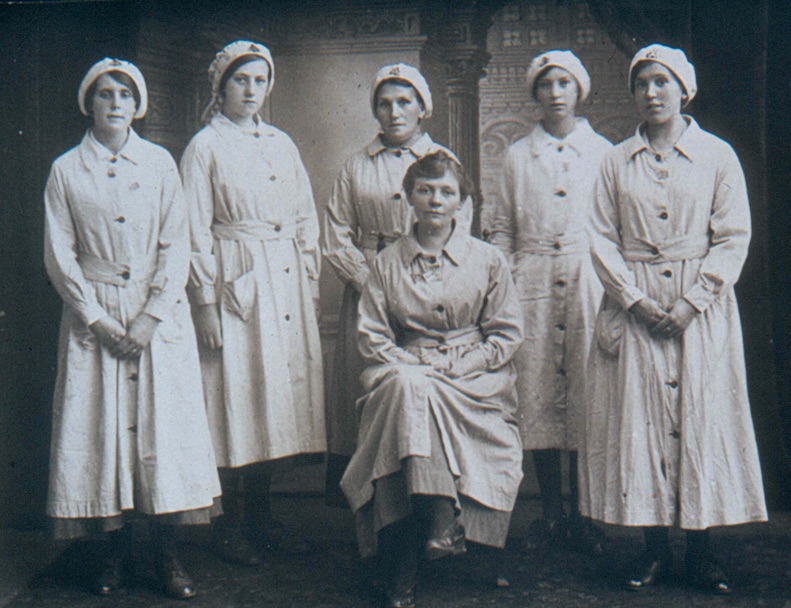 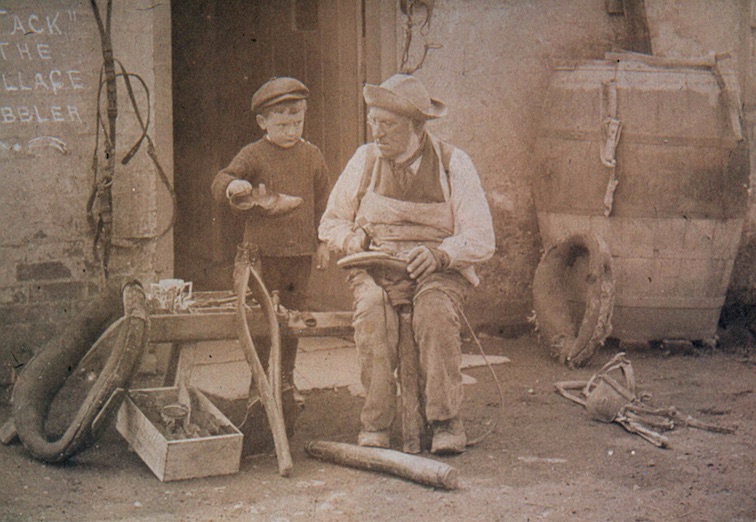 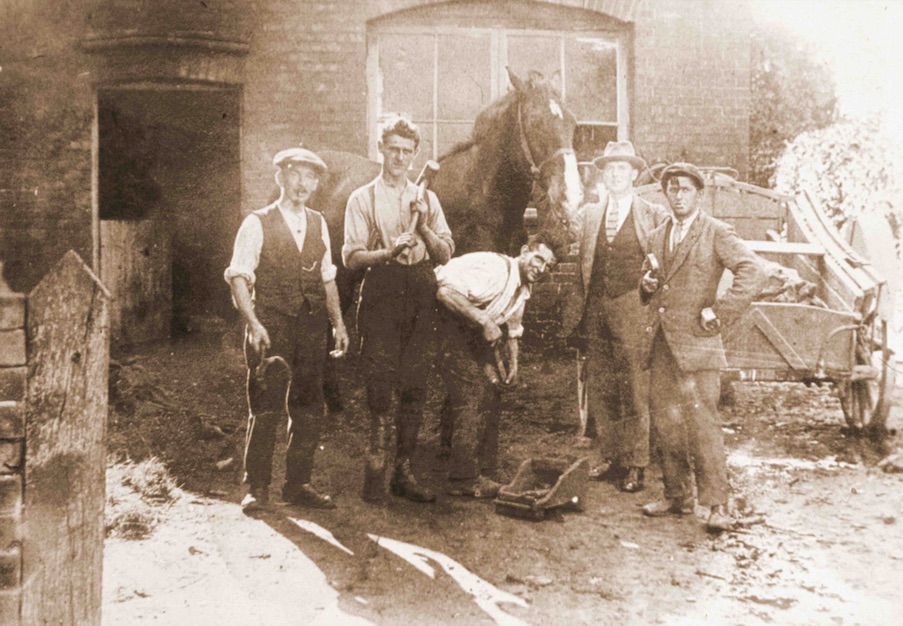 Stood on site which is now occupied by No.56 Oxford St.

This company had a yard between the brewery and the brickworks which is now commemorated in the name of Channing Close.

Pople’s yard was situated behind Alfred St / High St and fell victim to a notorious fire. 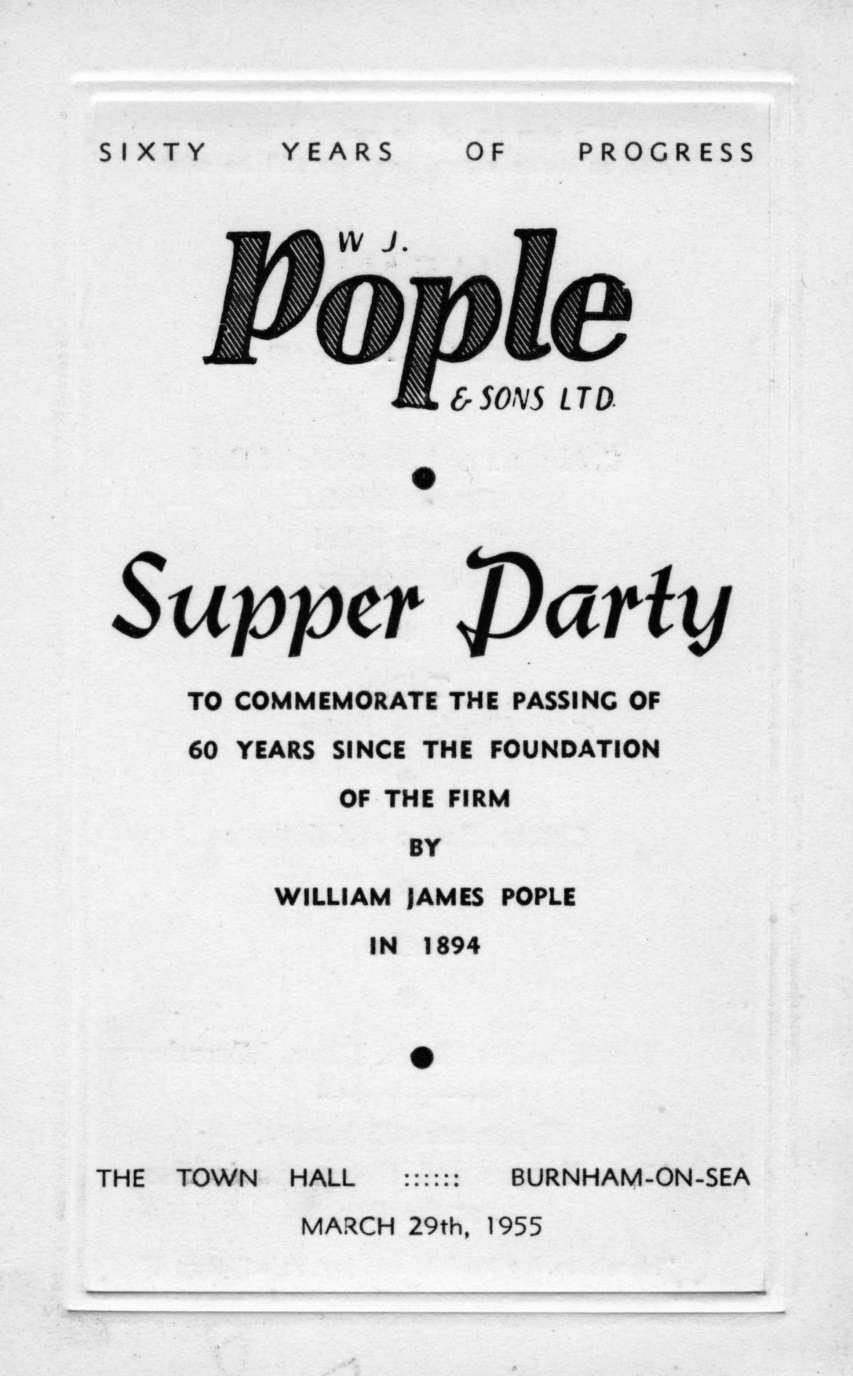 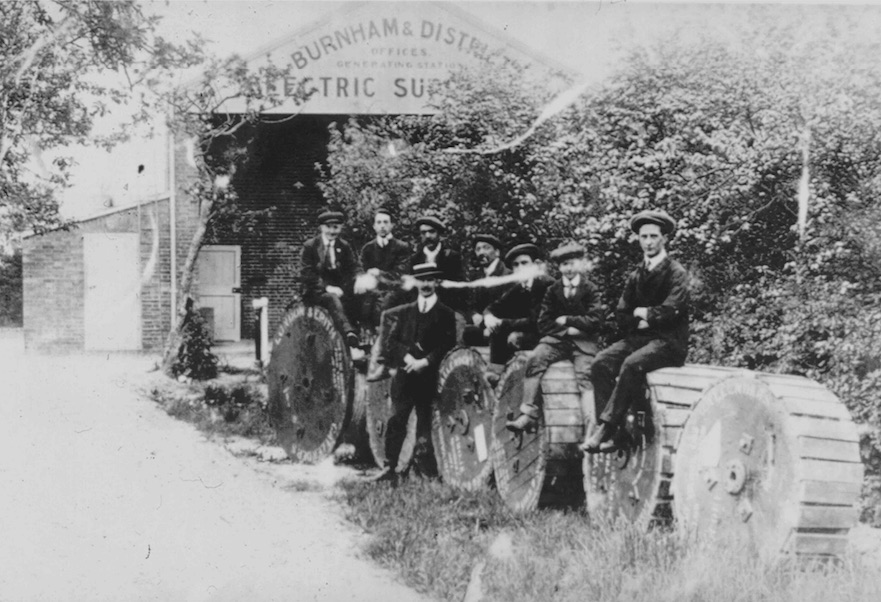 Burnham & District Electricity Supply Co in Love Lane  was run at one time by the Christy Brothers who also operated a ‘radio relay’ system for domestic radio from the same premises. 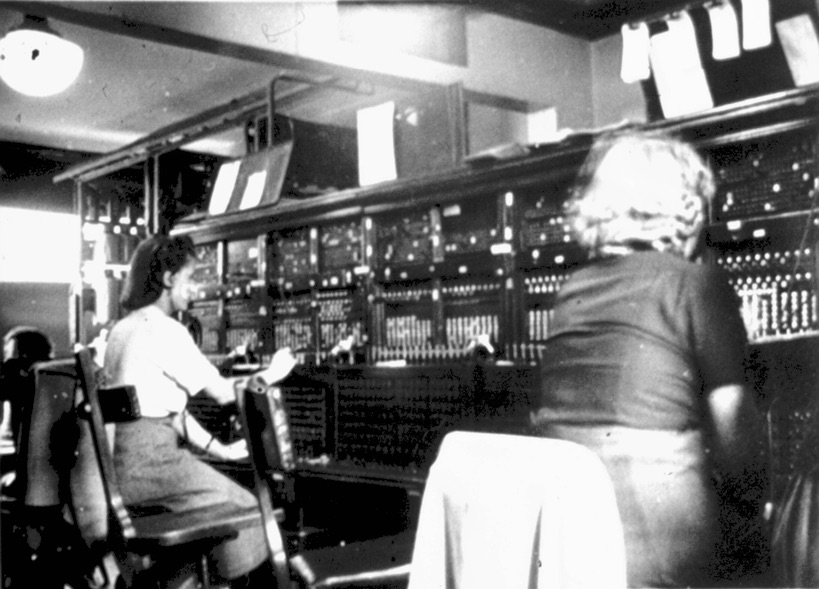 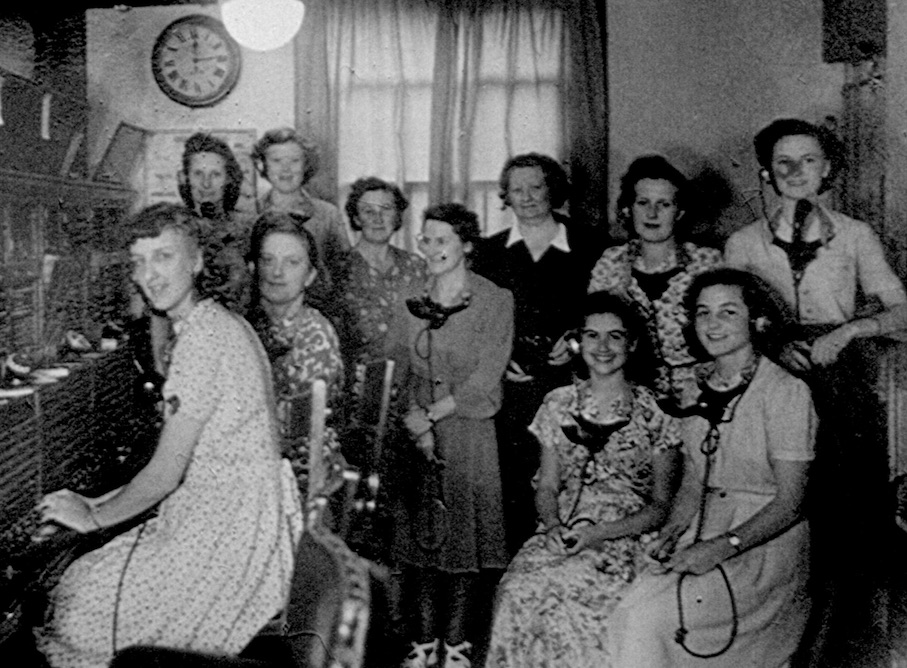 June Thomas says: “These pictures were taken in 1952 shortly before the exchange [in Cross St] was replaced by the one in Dunstan Rd. The young woman in the foreground of the second picture was Veronica Pearce, the daughter of the officer in charge.”

Leonard Lott’s at No 52 High St Burnham between the wars. 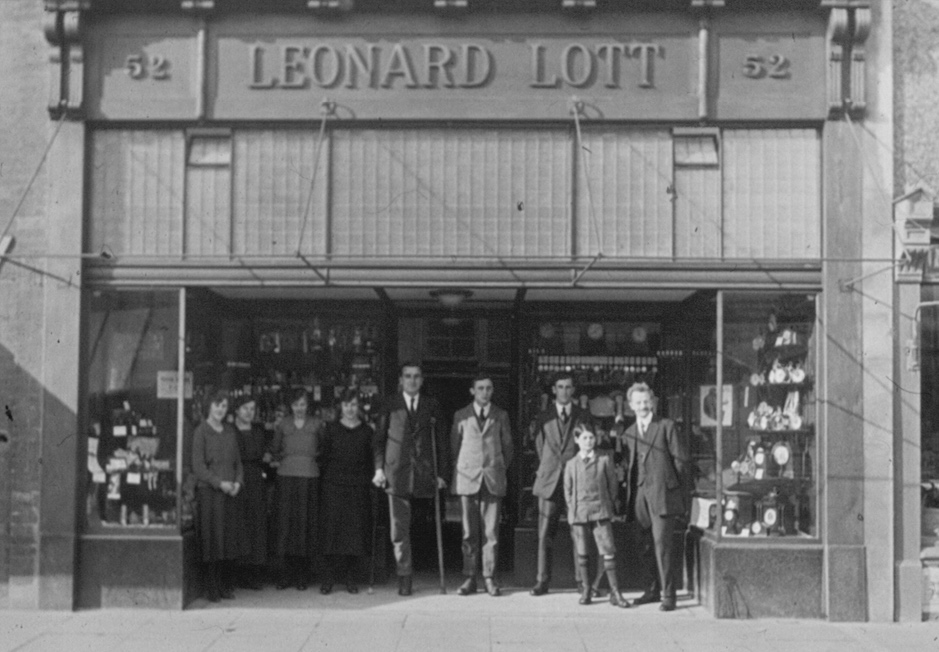 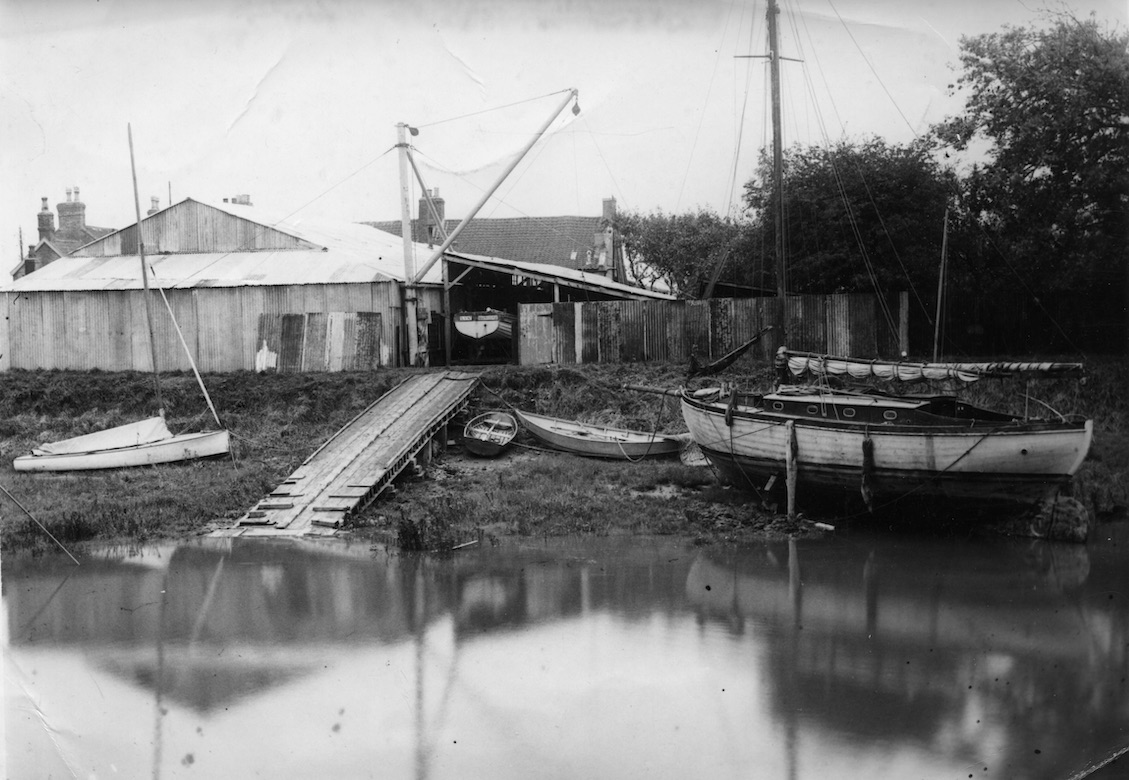 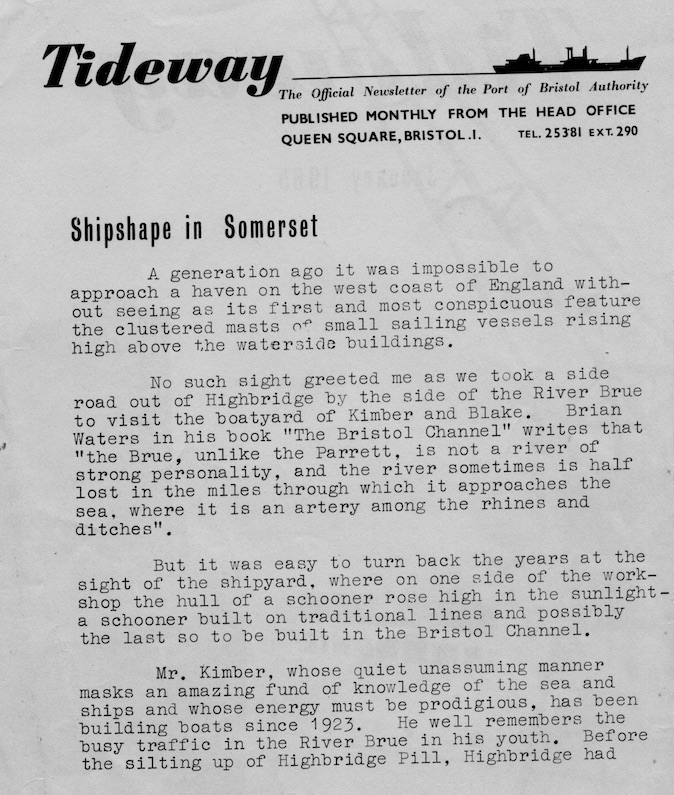 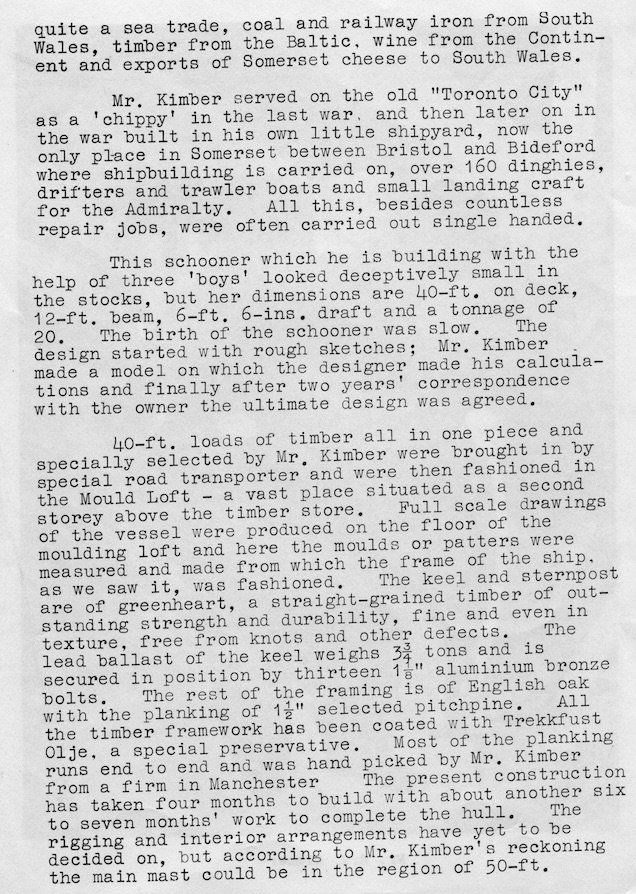 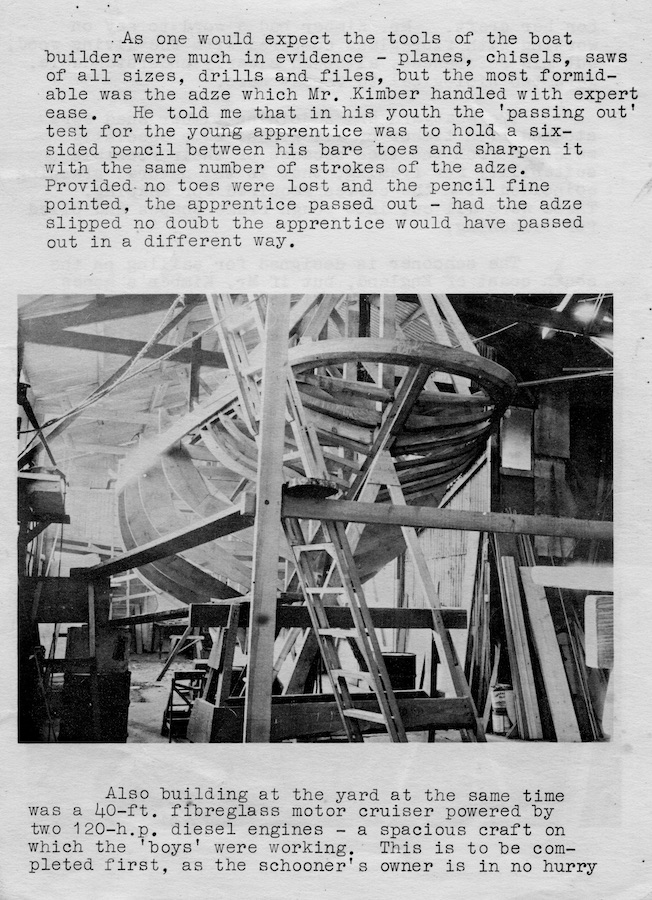 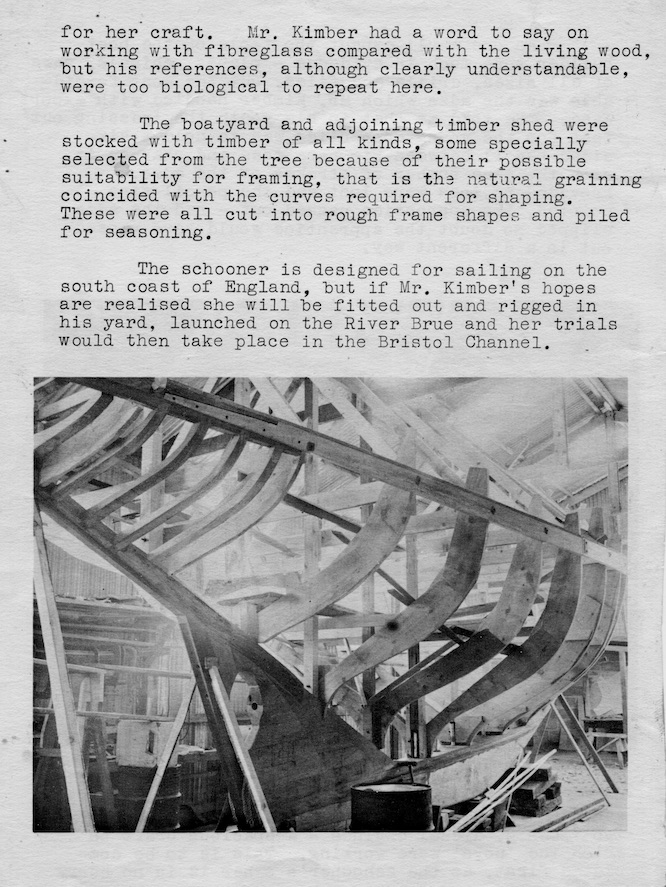 One of the largest yachts built at the yard was “Fresh Breeze” designed by Uffa Fox a leading boat designer, the yacht being for a Mr. Morrell of Porlock Weir. 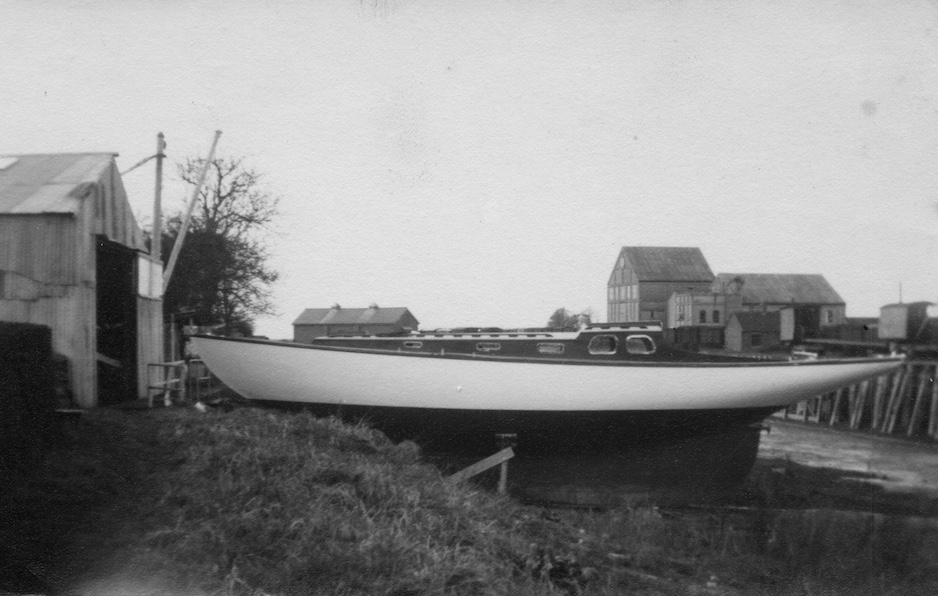 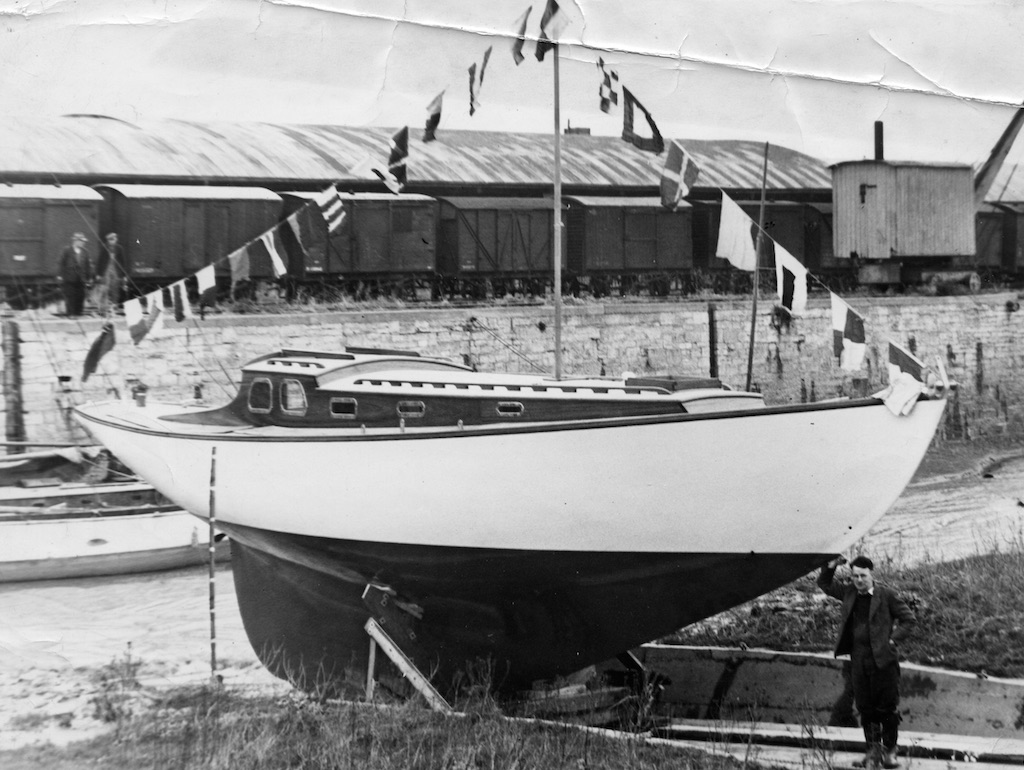 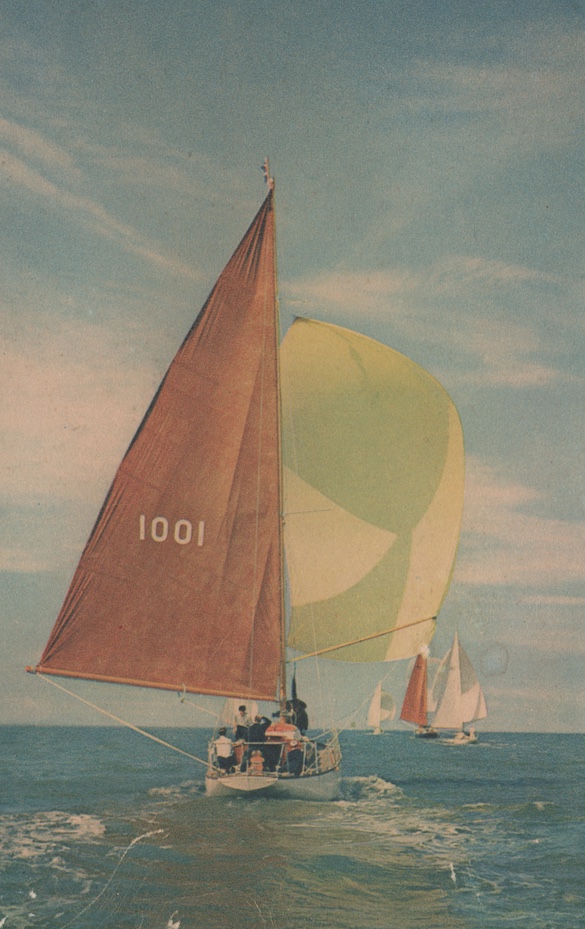 It seems that many of the town’s butchers operated slaughterhouses at the rear of their premises. The local Public Health Inspector clearly still had concerns about the hygiene of  slaughterhouses in 1904: 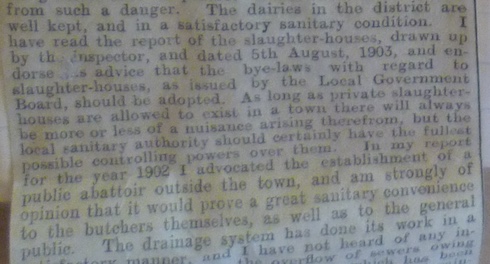 An important industry on the Somerset Levels. Below is a drawing from a periodical of 1901 showing work around Catcott. 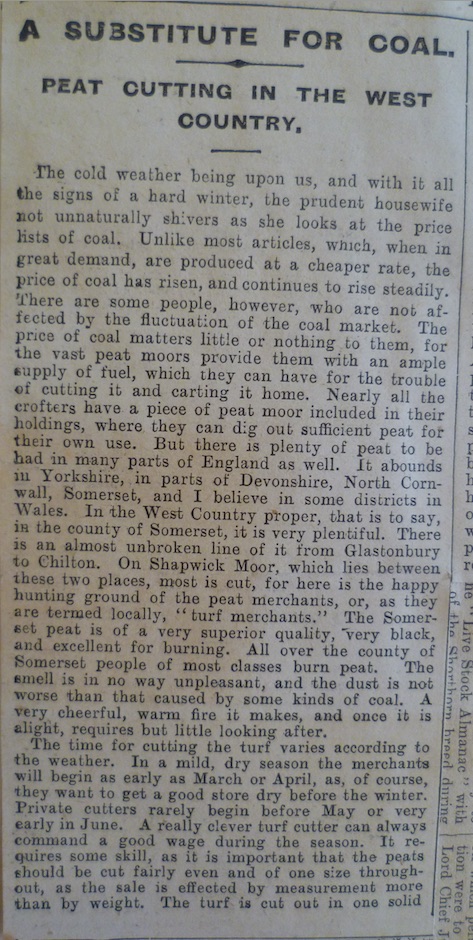