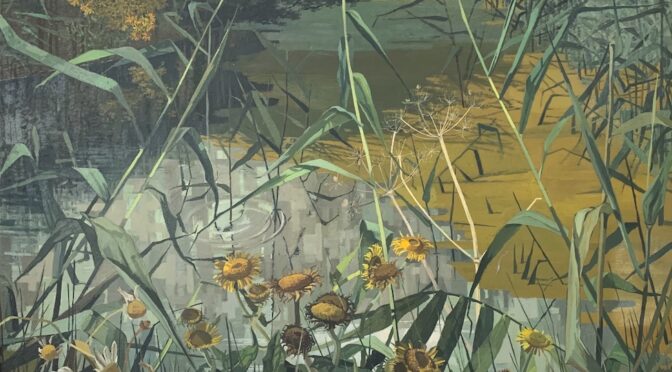 Cécile Crombeke was born in Bristol, where she attended La Retraite Convent School, leaving just before the Second World when she served in the Women’s’ Auxiliary Air Force. After the War she was awarded a scholarship to the West of England College of Art, qualifying in 1950.

She taught at La Retraite School in Burnham, from the late 50s until the school closed in 1984. During that time she organised Art Exhibitions of work by her students at the convent, as well as exhibitions of her own work at various galleries, including Royal Academy and the Royal Society of Portrait Painters. The nuns allowed her to work her time table so she could carry on with her own work, even providing her with a studio in the school. Although her time was limited, she never painted from photographs as she felt that portrait painting means interpreting the personality of the sitter.

She generally seems to have been appreciated as an Art Teacher. Quote from one student: Miss Crombeck was my sister’s hero and made going to school worth while.

Cecile lived in Brent Knoll and then, in retirement, near the Community Centre.

As well as paintings of the Somerset Levels and flowers, she specialised in portraits mainly of ‘ordinary people . Her work was denigrated at the time as being unfashionable.

She was painting a portrait of Auberon Waugh, when she was offered an introduction to his godfather, Lord Longford. This introduction was followed by five sittings which resulted in a portrait donated to the House of Lords and unveiled on 27 January 2010 at a reception hosted by the Lord Speaker. Lord Falkland, Chairman of the Works of Art Committee said;

‘This is an important addition to the picture collection at the House of Lords. We are delighted to be able to mark Lord Longford’s contribution over many years with this portrait, and members of my Committee were unanimous in agreeing to accept this most generous gift.’ The painting hangs in the Peers’ Dining Room.

She died in Burnham Nursing Home in 2002, in the same building where she had spent many of her teaching years.

From a Press Release for an Exhibition of Cecile’s work at the Woodspring Museum in Weston:

“In these new paintings, she portrays the diverse faces of the Somerset Levels, under mist, frost, snow and flood, ever changing as the varying light transforms them.”

Below is a portrait done by Cecile Crombeke of Justin Downes, at 5 years old, when a pupil at La Retraite Kindergarten. This was supplied to us by Justin. He tells us that he was kept still for the portrait by a continuous supply of sweets.

Jean Grimsey has kindly provided us with this photo of a sculpture by Cecile.

I was a pupil at La Retraite from 1953 to 1963 – I was Jean Worthington then. My father, Hugh, ran John Bland’s (timber yard) in Highbridge. I am the young girl of the sculpture – Cecile Crombeke was very interested in the shape of my head and we spent a lot of time in the art room at La Retraite while I posed for her. I was probably about 10. She sculpted the head in clay and then cast it in plaster and painted it this wonderful shade of green.

The head was exhibited at a gallery in London – my mother went up to see it there. It didn’t sell and over the years she offered it several times to my parents but the price was always too high.The head spent some time in the school library where it was pointed out to new pupils as being me – embarrassing when you are working in said library.

When Miss Crombeke retired and set up home with Della (Sister Mary Della Strada) the head went with them. Eventually after Mass one Sunday Della told my father that Miss Crombeke wanted to see him. The head was packed up in a Harrods Hamper box and my father was told that it was for me and that I should have had it all along.

So now this image of me as a young girl 65 years ago is safe on the top of a very tall bookcase, presiding over my home. She is wearing a very smart embroidered felt hat – at Christmas time she wears a paper crown.

When La Retraite became a nursing home both my parents were cared for there before they died. It was strange going into what had been my school – particularly as one of the headmistresses I had known was also being cared for there. And, of course, that is where Miss Crombeke finally died.

Tim Cromwell has also provided us with images of paintings by Miss Crombeke, from 1973, of his wife Geraldine as a 12 year old and her father Michael Hill. Mr Hill was a local solicitor, living in Brent Knoll from 1960 until his death in 2003.  It is thought by the family that his  painting was a preparatory work for Miss Crombeke’s painting of Lord Longford. 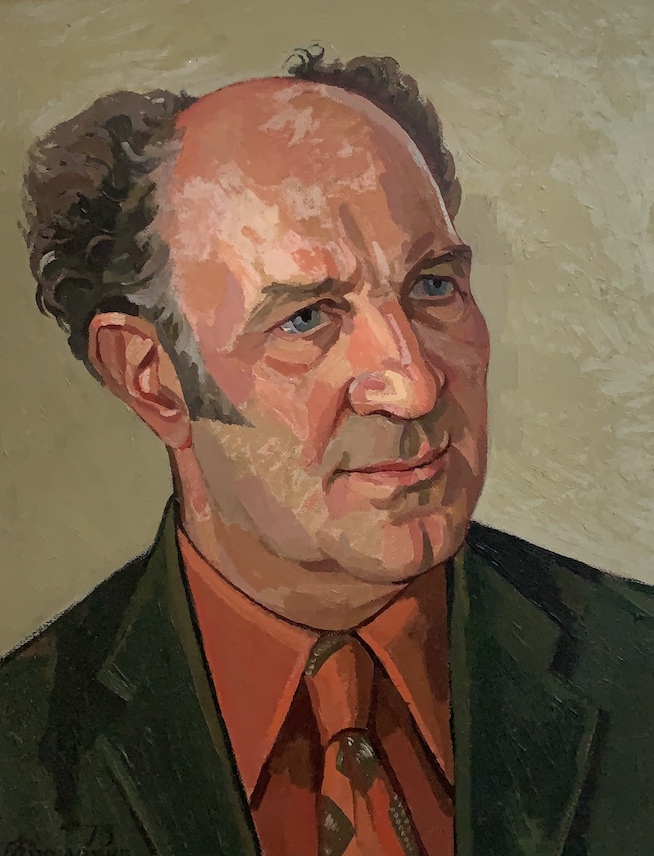 More paintings owned by Tim’s family show that Miss Crombeke had more strings to her bow than just portraits. The one below and the one at the head of the page are clearly local landscapes. 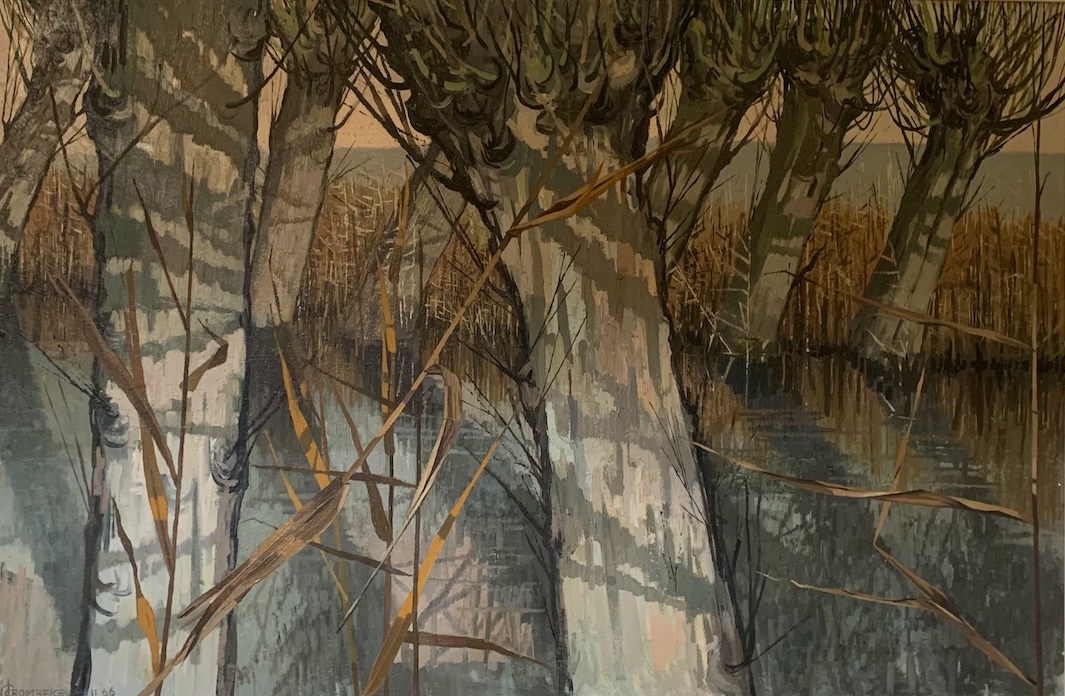 Artistic talent was clearly a family trait as the landscape below, painted by Miss Crombeke’s father, shows.

For images of some of Cecile Crombeke’s other paintings see :