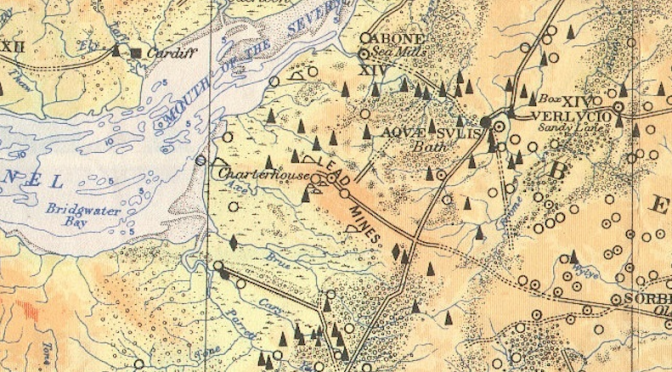 Settlements are known to have existed in the  Burnham area from the earliest recorded times of English history.

Roman remains (flooring, paving, pottery) have been discovered during excavations in the Worston Rd area. Samian ware, believed to be Romano-British was unearthed during an archaeological dig on the brewery site before the housing development in the 1970’s. The skeleton of a large dog or wolf was also found, its context on the site suggesting that it might have died having sought refuge there from high waters (from excavation notes by local historian Samuel Nash, held at Somerset Heritage Centre). It is known that there was a Romano-British temple on Brean Down, and also that the Romans had a substantial interest in the metals which were mined on the Mendips. There is evidence rom Nash’s excavations that the area south of the River Siger was used for salt production whilst the area north was drained for farming.

The legend of the visit of St Joseph of Arimathea is claimed by some to account for the historical usage of the name ‘Paradise’ for land stretching from the coast to Middle Burnham between Stoddens Rd and Brent Rd. The idea that this indicated Joseph’s route to Glastonbury is however thought unlikely as the terrain would have been very difficult to navigate at that time.

It is likely that traders in early times would have been landing near our stretch of the Bristol Channel coast in order to access the Mendip mining industry.  However it is also likely that this would have been nearer to Brean down due to the difficult marshy terrain  resulting from the disposition of the waterways conducting the water which is now channelled into the River Brue (see River Siger ).

Settlements in those times would have been around the meres and marshes on land above average water level. Inhabitants were known as Seomersetans (Seo-Mer-Seaton – dwellers by the sea and meres). The marshiness of the land around Brent Knoll led to it being known as Mons Ranarum (Mount or Island of Frogs) by the monks of Glastonbury. Mark Causway was the main dry track across to the higher ground at Blackford and Wedmore.

It was the nature of this terrain which made the headquarters of King Alfred at Athelney inaccessible to the invading Danes during the 9th century.

A major sea victory of Alfred’s forces over the Danes under Hubba  took place in Bridgwater Bay, in which Hubba was killed. One of several different accounts of the origin of the inn name ‘Hobbs Boat’ (on the A370 near Lympsham) is that Hubba’s  flaming death boat  was pushed out to sea in the area but was washed back up the river to this site.

King Alfred was Lord of the Manor of Burnham and mentions it in his will so its existence as a named entity goes back to at least the 9th century and probably considerably further. The name is Saxon in origin: ‘Burne’, a stream or river and ‘Ham’ a settlement.

Land reclamation projects, driven principally by the Church for purposes of agriculture and rents  gradually resulted in the establishment of more and more permanent settlements.

In general the origin of the name Burnham (which occurs in many places around the country ) is from  Old English burna “stream, spring” and ham “home”. More specifically, the Bristol Mercury guide book to Burnham, Somerset (1884) has the origin of our town name as being from the River Brue as in ‘Bruen Ham’.

During the 10th century Burnham is recorded as being within the ‘hundred’ (a civic division) of Bempstone which extended inland to include Watchfield, Mark and Wedmore. In 1285 a royal charter was granted for an annual fair at Burnham.

Apart from  records of petty (mostly) crime, litigation and establishment of land title there is little local  history of record however until the late 18th century. By this time there was a small established fishing community at Burnham clustered around the church (now Victoria St, previously Church Rd) and among the coastal dunes and numerous farms with associated cottages inland. By the late 18th century the Royal Clarence Coaching in was established.

There is some record of the local impact of the English Civil War of the 17th Century. One example can be found in the book illustrated below. 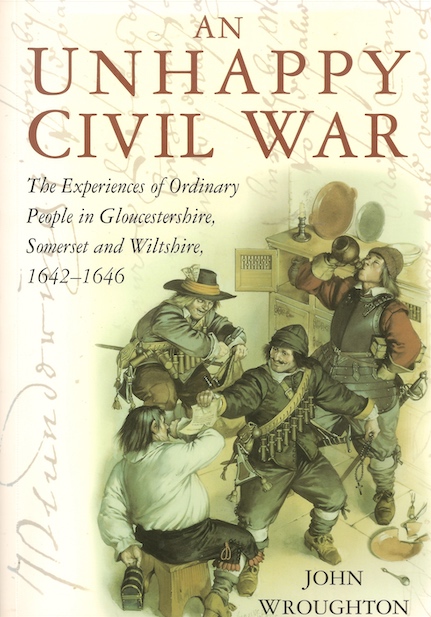 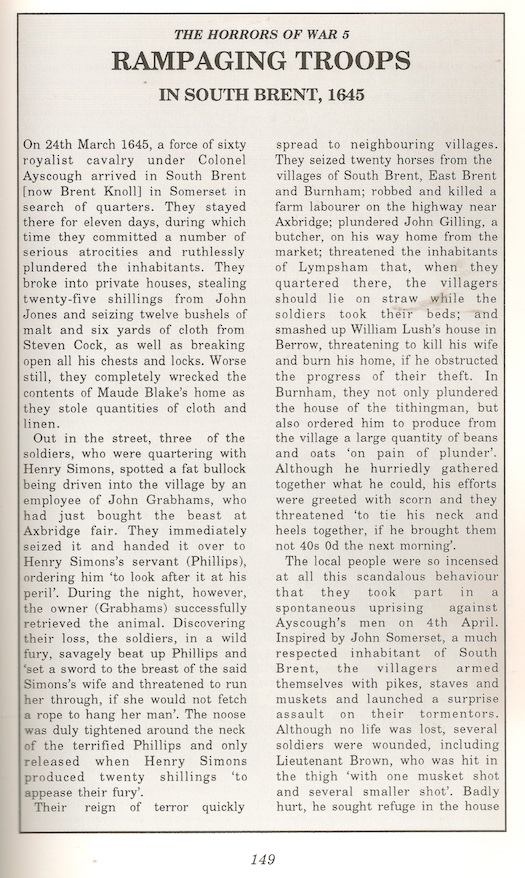 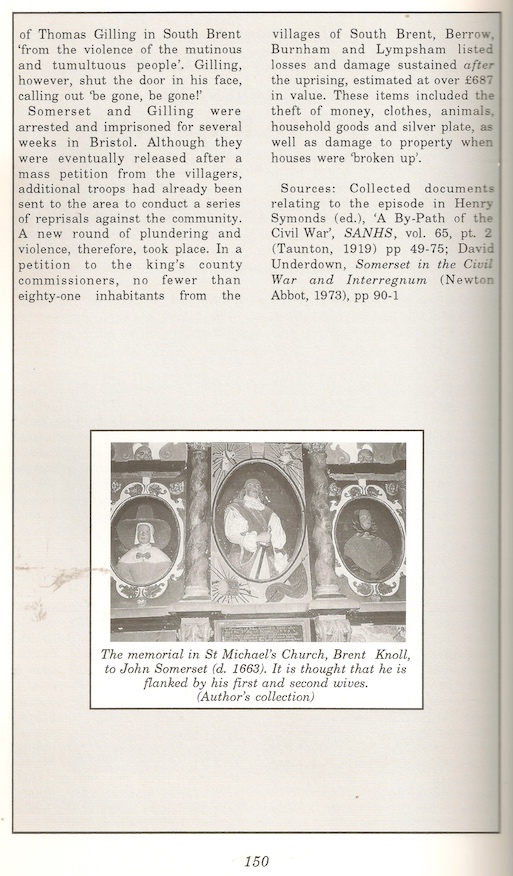 Extracts above by kind permission of John Wroughton.

Until Victorian times the main routes to the outside world were sandy lanes: Paradise Road (Berrow Rd) to Stoaten Lane (approximated now by Stoddens Road) which went to Middle Burnham, where Love Lane met it, and proceded to Edymede (Edithmead) where it joined the Bristol Turnpike (A38); and Sandy Way (now Highbridge Rd) to Highbridge. These lanes were so poor that it was difficult for wheeled vehicles to use them. 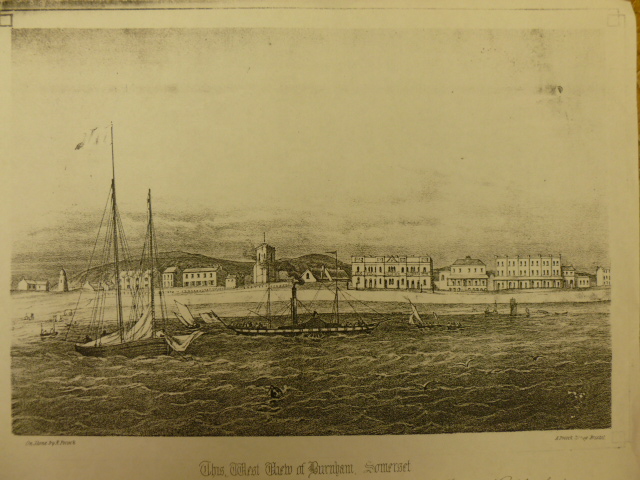 From around the time of Victoria’s accession the development of the  Burnham we still see today commenced. In 1801 there were only 653 residents, by 1831 there were 1,113 (Parliamentary Gazeteer of England & Wales 1849).

The earliest commercial development in Burnham appears to have been mainly around the Church in what is now Victoria St and at the North end of this road, once known as Church St. We know little about this early phase but information in the notes of local historian Sam Nash gives us some clues.

Nash tells us that he identified 5 shops present in 1841: a post office; John Deacon’s butchers (Victoria St); Thomas King’s drapers (opposite churchyard gate) and another draper’s (this and the 5th not further specified). At around the same time he finds 3 “inns or public houses”: The Bell (not otherwise known under this name); The Crown and The Royal Clarence Hotel.

We see some of these names recurring in connection with major retail businesses in the town in later years.

Ref: ‘The Book of Burnham on Sea’ by Winston & Robert Thomas, Halsgrove 2011.