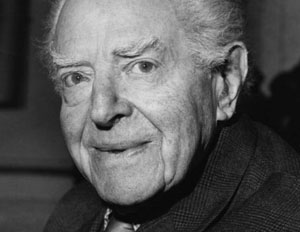 Travers (12/11/1886 – 18/12/1980) was born in the London borough of Hendon, the elder son and the second of the three children of Walter Francis Travers, a merchant, and his wife, Margaret Burges. He was educated at the Abbey School, Beckenham, and at Charterhouse. He did not greatly enjoy his schooldays and later declared that he had been “a complete failure at school”. The only thing he enjoyed there was cricket, for which he had a lifelong enthusiasm, later writing a memoir focusing on his passion for the game, Ninety-four Declared: Cricket Reminiscences. When he was nine, his father took him to the Ashes match at the Oval. Eighty years later he recalled watching W G Grace and F S Jackson opening the batting for England with Ranjitsinhji coming in first wicket down: “I remember when Ranji came in to bat the crowd started singing; I think he only made 7; it was a very low scoring match.

Travers left Charterhouse in 1904 and was sent by his parents to live in Dresden, for a few months, to learn German. While he was there he saw performances by the leading French actors, Sarah Bernhardt in La Tosca, and Lucien Guitry in Les affaires sont les affaires, which inspired him with a passion for the theatre.[4] His parents were unimpressed by his ambition to become an actor; he was sent into the family business, the long-established wholesale grocery firm Joseph Travers & Sons Ltd, of which his father was a director. He found commercial life tedious and incomprehensible: “I had no more idea what it was all about then than I have now and vice versa. He was soon transferred to the company’s offices in Singapore and then Malacca, before returning to London in 1908 on the death of his mother.

On the outbreak of the First World War, Travers joined the Royal Naval Air Service (RNAS). His service was eventful. He crashed several times and narrowly failed to shoot down a Zeppelin. He became a squadron commander, and when the RNAS merged with the Royal Flying Corps he transferred to the new Royal Air Force with the rank of Major in 1918. He served in south Russia during the Allied intervention in the Russian Civil War, in 1919, and received the Air Force Cross in 1920.

In April 1916 Travers married Violet Mouncey (d. 1951), the only child of Captain D W B Mouncey, of the Leicestershire Regiment, and granddaughter of Sir James Longden. With the security of his wife’s income, Travers determined to earn his living as a writer when he was demobilised from the RAF. He and his wife settled in Somerset, and he started to write. His first attempt was a farce about a lawyer who finds himself mistaken at a country house full of strangers for half of a husband-and-wife jazz dance act. While writing it he decided to turn it into a novel, The Dippers, which was accepted by John Lane and published in 1921. The reviews were good. It was followed by many successful ‘Aldwych’ farces. Travers also performed in some of his own plays.

During the Second World War Travers rejoined the RAF, working in intelligence. He was given the rank of Squadron leader and was later attached to the Ministry of Information as air adviser on censorship.

After the death of his wife in 1951 Travers lost his zest for writing and travelled with friends in Malaya. In 1968 Travers returned to playwriting with a new farce, Corker’s End, which was produced at the Yvonne Arnaud Theatre, Guildford. The Times commented, “Some of his jokes, which always tended to be outrageous, are perhaps a little more outspoken than they used to be, but nothing essential has changed. After the abolition in 1968 of theatre censorship in Britain, Travers was for the first time able to write about sexual matters without discreet allusion or innuendo.

Travers served as prime warden of the Worshipful Company of Fishmongers (1946) and as vice-president of Somerset County Cricket Club. He received the CBE in the Queen’s Birthday Honours, 1976. In the same year he was presented with a Special Award at the Evening Standard Awards for his services to the theatre.

One of his Aldwych farces ‘Rookery Nook’ is base on his own novel of 1923  It depicts the complications that ensue when a young woman, dressed in pyjamas, seeks refuge from her bullying stepfather at a country house in the middle of the night.The action takes place on a summer night in the lounge-hall of “Rookery Nook”, a house at Chumpton-on-Sea, Somerset. It is thought that Chumpton is based on Burnham and it is possible  that a number of disguised local characters appear in the play.

It is not known why Travers settled in Burnham. He lived at ‘Hillam’, a large house in The Grove which still stands. He  active in local cricketing life  as can be seen here.

Here is a Youtube upload of Travers speaking to Brian Johnston about his interest in cricket:

Travers is buried, together with his wife, in Berrow Churchyard, his grave bears the inscription “This is where the real fun begins”. Ben Travers Way is named after him. 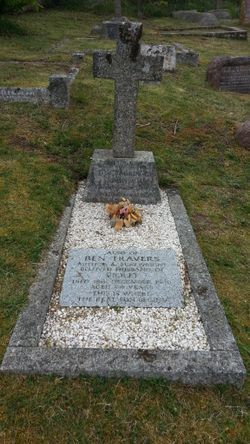