Locke signed and sealed his will in the presence of Jas. Parker, Jo. Parsons and Jas. (?) Sutton on October 6th 1806, and on 31st of the same month [BP Registers] he was buried in a lead coffin interred in the church in the same vault which he had had made for his first wife.

On a tombstone erected in the churchyard to the memory of his daughter Mary Estance, there is the following inscription: “She was the daughter of the late Richard Locke of Highbridge who was interred in the area of this church October 31st 1806 aged 76”.

[The writer notes here “Surely an error; BP Registers and a letter to Templer, place his birth at 1737 therefore 69”] 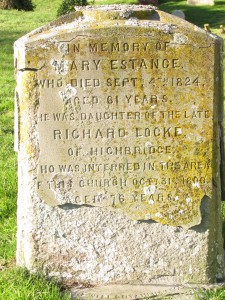 In his will he directed his executor, his son Richard, to cover the vault with a large stone with the words “Never to be removed” engraved on it. Up to the present his wish has been respected.

[This paper is not dated, so to what date the word “present” applies is not known. Editor.]

For the stone, in a good state of preservation, is still in the church. Richard his son and heir, inherited HIGHBRIDGE HOUSE, a library of books, a silver plate and lands worth £500 pa. After a period of 8 years, during which time the rent pa. was to go in turn to

10 grandchildren, the 6 LOVIBONDS each receiving £500, 3 ESTANCES and Clarissa SALISBURY £250 each.

To Harriett and Mary ESTANCE he bequeathed HIGHBRIDGE COTTAGE; to their brother James, Pound House and to Clarissa, half an acre of meadow called WRIDE’S PADDOCK. His daughter Mary ESTANCE was given the house she occupied LODGE HOUSE, and all the household goods, while Elizabeth LOVIBOND his other daughter, inherited co-jointly with Mary, HUNTSPILL TENEMENT and received “an oak chest which was her mother’s”

It has been impossible to trace any descendants in the parish of Burnham today. The latest reference found to any such is made in Notes and Queries of 1908 [10th series xi, p.291], when a correspondent writes “Some years ago I saw at Burnham in the possession of a venerable lady, a relative of Richard Locke his copy of the volume of the 12v edition of Wesley’s Journal”