It was not until 1859 that Burnham got its own printing works. Joseph Salisbury, local postmaster, bookseller and stationer purchased a press from Sharlands of Tiverton and employed William Patey, also of that town, to establish the new printing business  in Victoria St.

Patey subsequently worked in a number of other towns before purchasing the ‘Clevedon Courier’ in 1862. In 1864 he sold this newspaper and returned to Burnham, where in the meantime the ‘Burnham Weekly Journal’ had been started by W.A. Woodley in 1860. Woodley was a Taunton newspaper proprietor who had added to his weekly ‘Somerset County Gazette’ a mid-week journal ‘The Western News’ covering outlying areas. The ‘Burnham Weekly Journal’  appears to have been a local edition of this.

Mr Patey then launched his own Burnham newspaper  the ‘Burnham Star and Highbridge Gazette’ (1864). 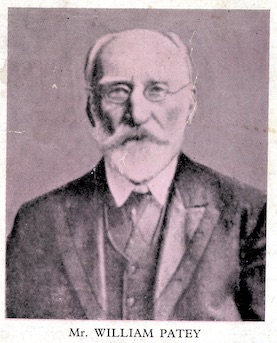 Initially this newspaper  printed local news on the reverse of a national news broadsheet imported from London (as was often done in those days). Eventually it was re-named to the ‘Burnham Gazette and Visitors List’ and the national news was replaced news of seasonal visitors to the town. The price was 1d.

Around 1866 the ‘Highbridge, Burnham and Bridgwater Flying Post was also available. This was a local variant of the Western Flying Post’ established in Yeovil in 1744. Neither this nor Woodley’s ‘Burnham Weekly Journal’ appear to have had a very long life.

In its early years Patey’s newspaper occupied a number of different premises: it moved from Victoria St to Regent St, then Cross St, back to Regent St (No. 1), then to College St (‘Caxton House’).

From 1885 to 1890 a Glastonbury-printed paper titled ‘Burnham and Highbridge Independent’ was available but was then incorporated into the ‘Avalon Independent’ and eventually the ‘Bridgwater Mercury’.

The popular annual almanac must have been a feature of Patey’s business almost from the start as the advert below for the 1904 edition describes it as the 40th. 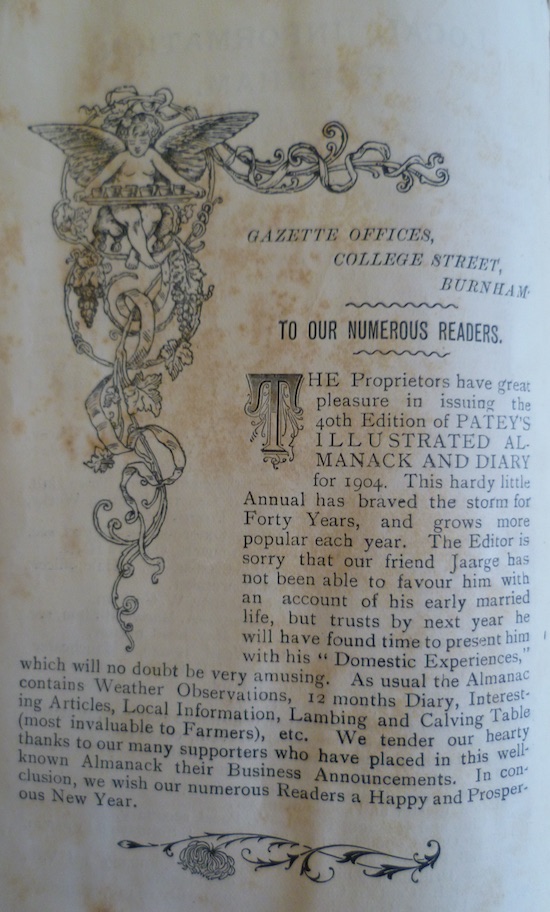 The Burnham Herald appeared in 1905 as a rival to Patey’s journal and almost immediately incorporated the ‘Highbridge Echo’, which had been in publication since 1894. In 1909 this was renamed the ‘Burnham and Highbridge Post’, but by 1910 it had ceased publication.

Bookbinding and postcards were other lines of business as demonstrated in these advertisements from  1904 & 1905: 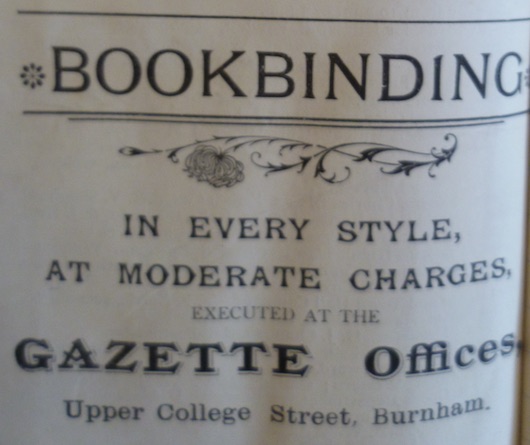 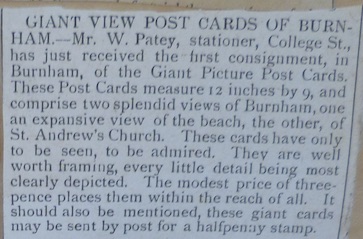 William Patey retired in 1908 and his firm moved back to Victoria St (No 2, Now A&F Estate Agents). It continued business there until 1947 when it was bought by the Woodley family.  F.S. Patey and later his son Leslie continued to run the firm during this period.

For a period of time two identical newspapers were published by the Pateys, one named the ‘Burnham Gazette’ and the other the ‘Highbridge Express’ but the name was eventually merged.

Additional pages from the Almanac can be found here.

The ‘Highbridge Independent’ (printed in Bridgwater) ran for 11 years from 1922.  The ‘Burnham and Highbridge Advertiser’, printed in Burnham,  also appeared very briefly in 1931.

Following the Patey company’s sale to Woodleys the office moved to 18 High St and remained there until 1962 when it moved to No. 35 College St. The ‘Burnham Gazette and Express’, as it became known was the first newspaper to win an award in the annual Newspaper Design Contest.

Some people may remember reading  the ‘Snippets Club’ as children,  with the adventures of Denny, Penny and Snip the rabbit; and ‘Auntie Margaret’s’ weekly letter. By 1964 the club had 500 members. The club’s motto was ‘Obedience and Cheerfulness’ 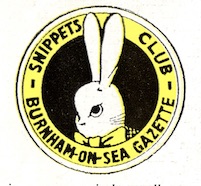 Information compiled from the  Centenary Supplement to the Burnham Gazette and Highbridge Express of 25th June 1964.