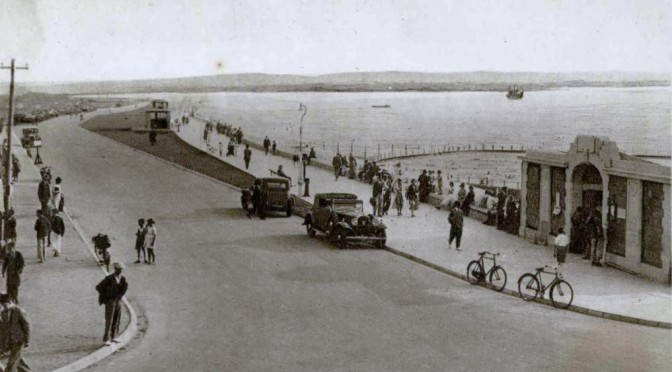 Work on the ‘new sea front’ running south from  Pier Street to Pillsmouth began in the late 1920’s. Construction of both this ‘South Esplanade’ and the ‘Marine Lake’ was funded by a grant from the Government to the Urban District Council  to combat unemployment and encourage Holiday Makers. In the picture below Customs Officer Mr Ward is seen inspecting the progress of the work . 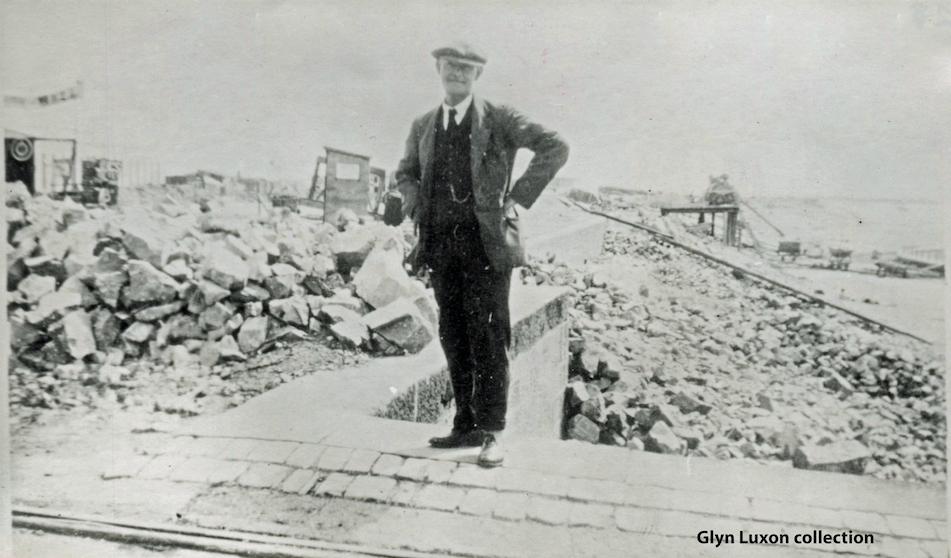 This  postcard (below), probably from the late 19th century, shows (from the other direction) the same spot south of the jetty and railway track when it was still undeveloped. 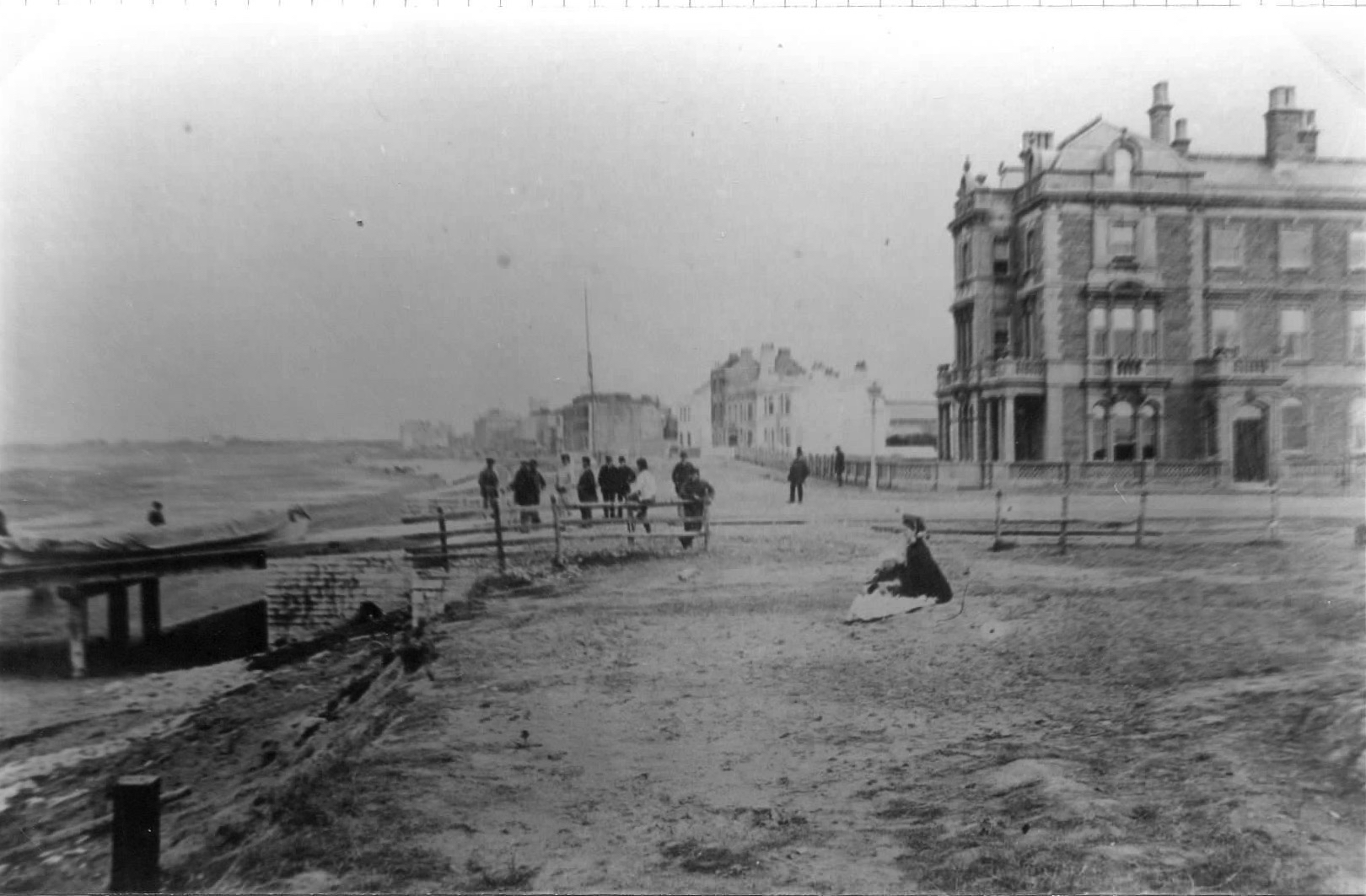 At one time there was a conglomeration of shacks along this part of the sea front, known as ‘Chinatown’, which were probably used for diverse purposes. The photo below shows the Wynn brothers’ pigeon loft in that area. It is said that others kept pigs on the site. Four of Burnham’s old wells were situated here. 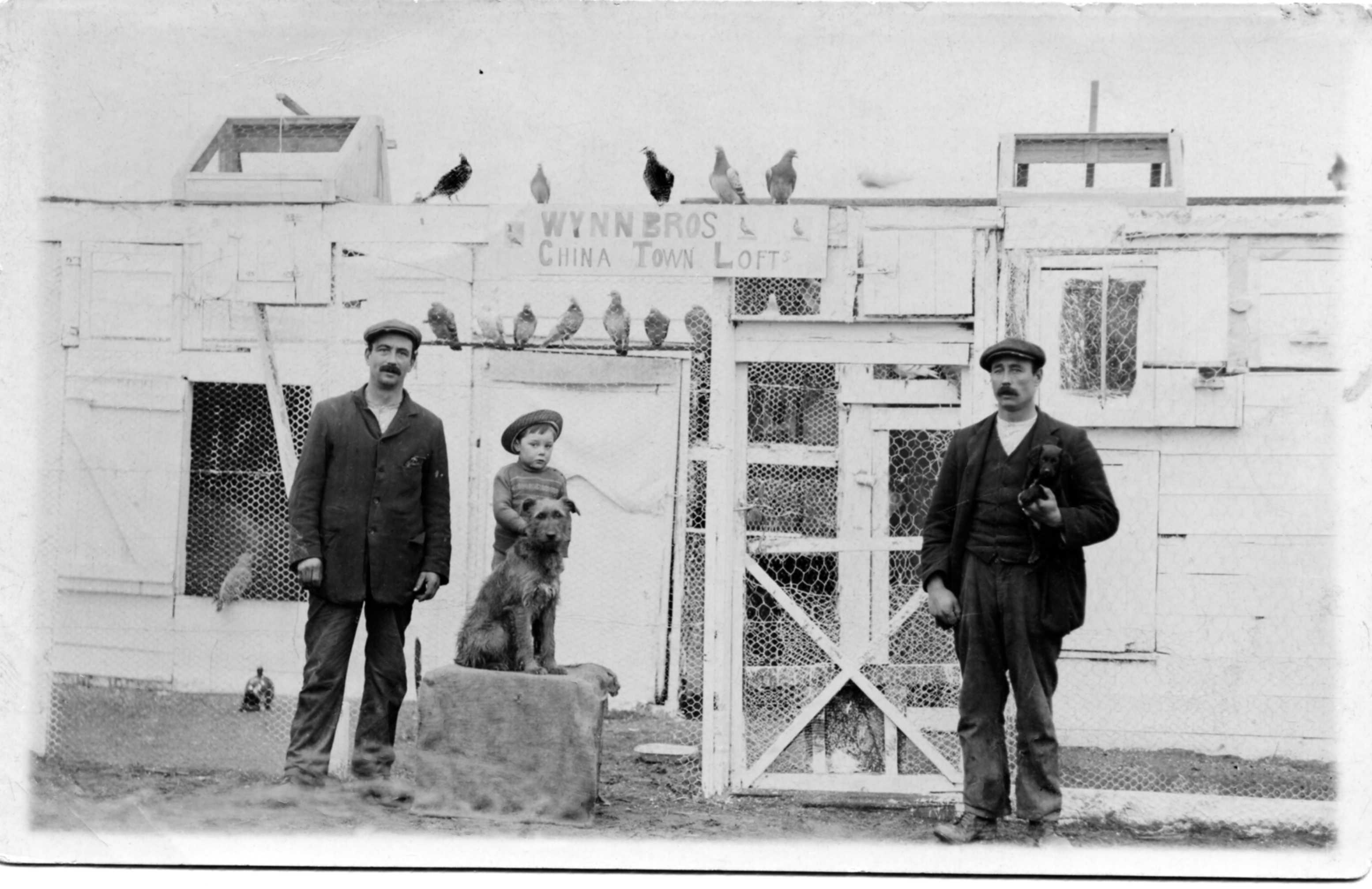 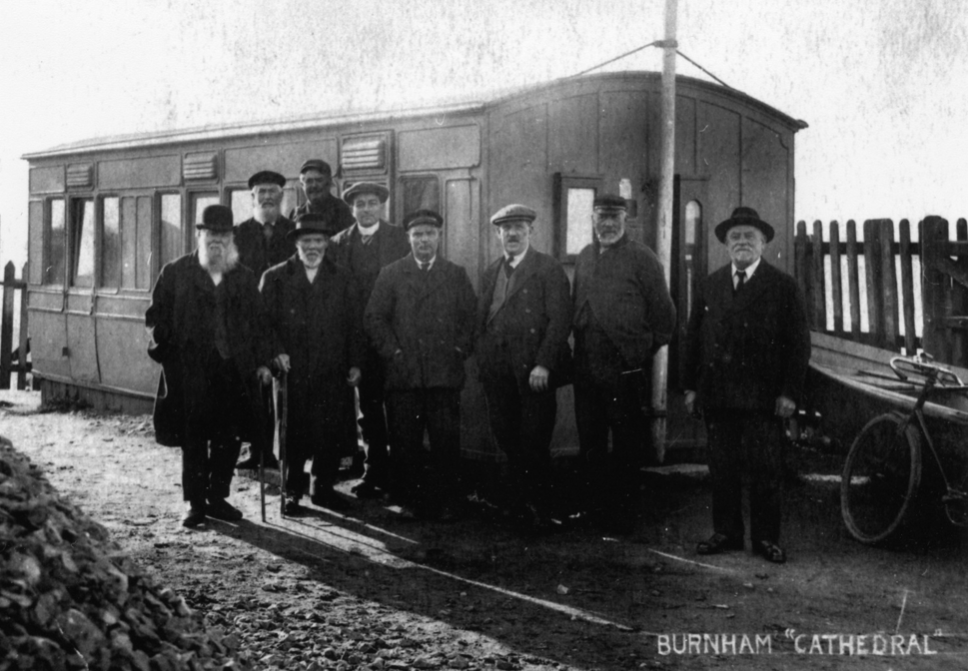 An old railway carriage used by pilots and fishermen and known as ‘The Cathedral’ (services were held there) stood just beyond the railway track.   Follow this link for more information about shipping. 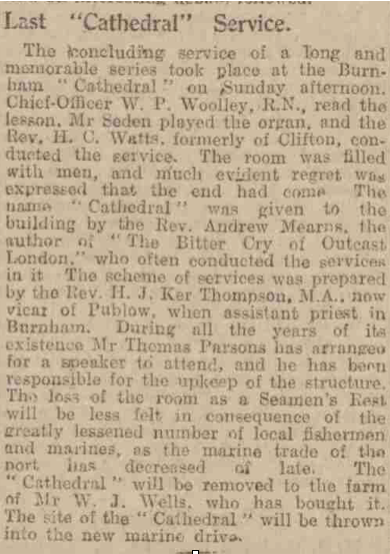 With the laying out of the new South Esplanade came a new Pilot Hut, a little further south. The man on the right in the photo below (1938) is pilot James ‘Jimpy’ Smith. 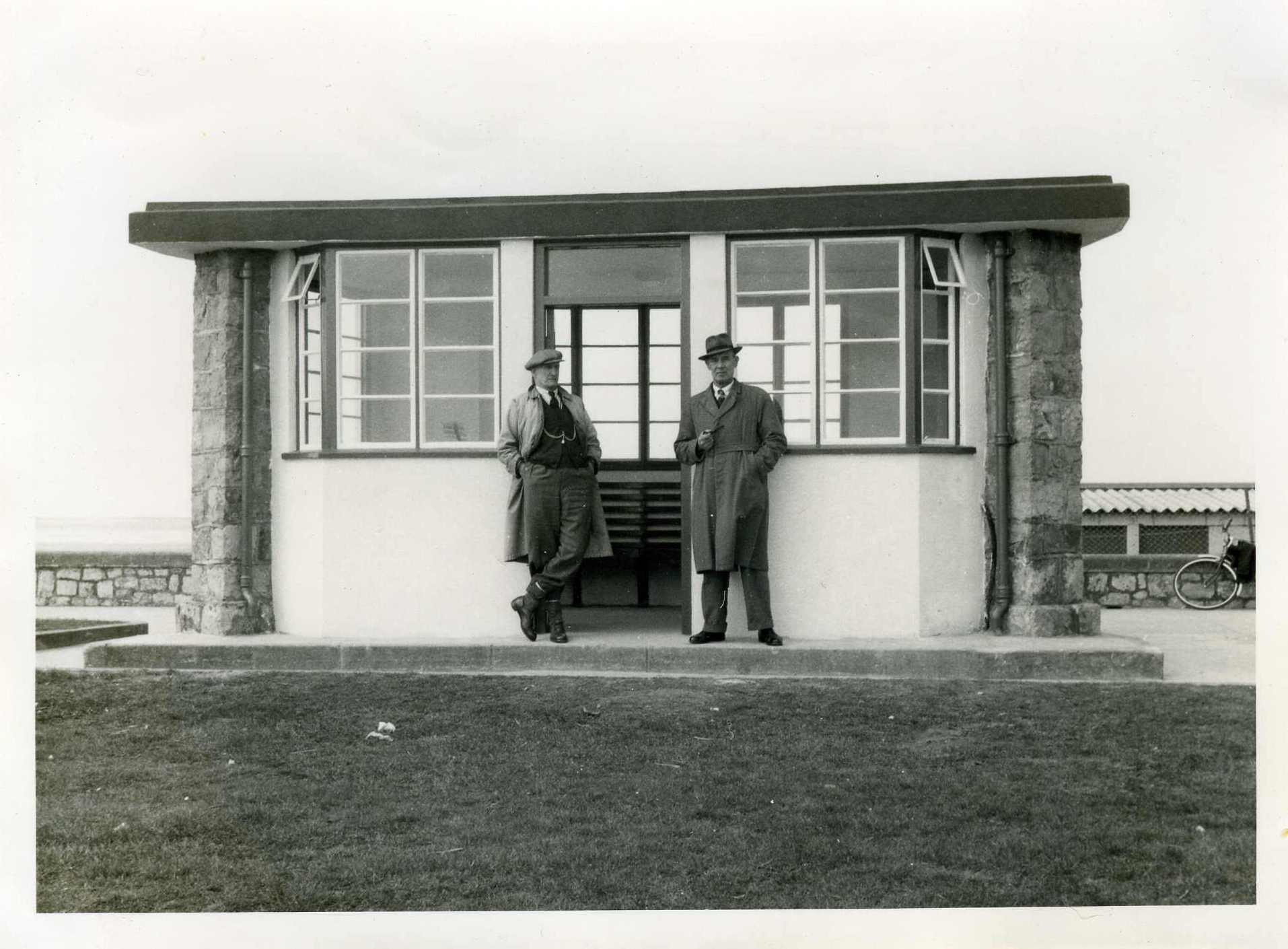 The picture below shows how the new Esplanade was developed between the dunes and the sea. Housing was later built on this area of dunes. 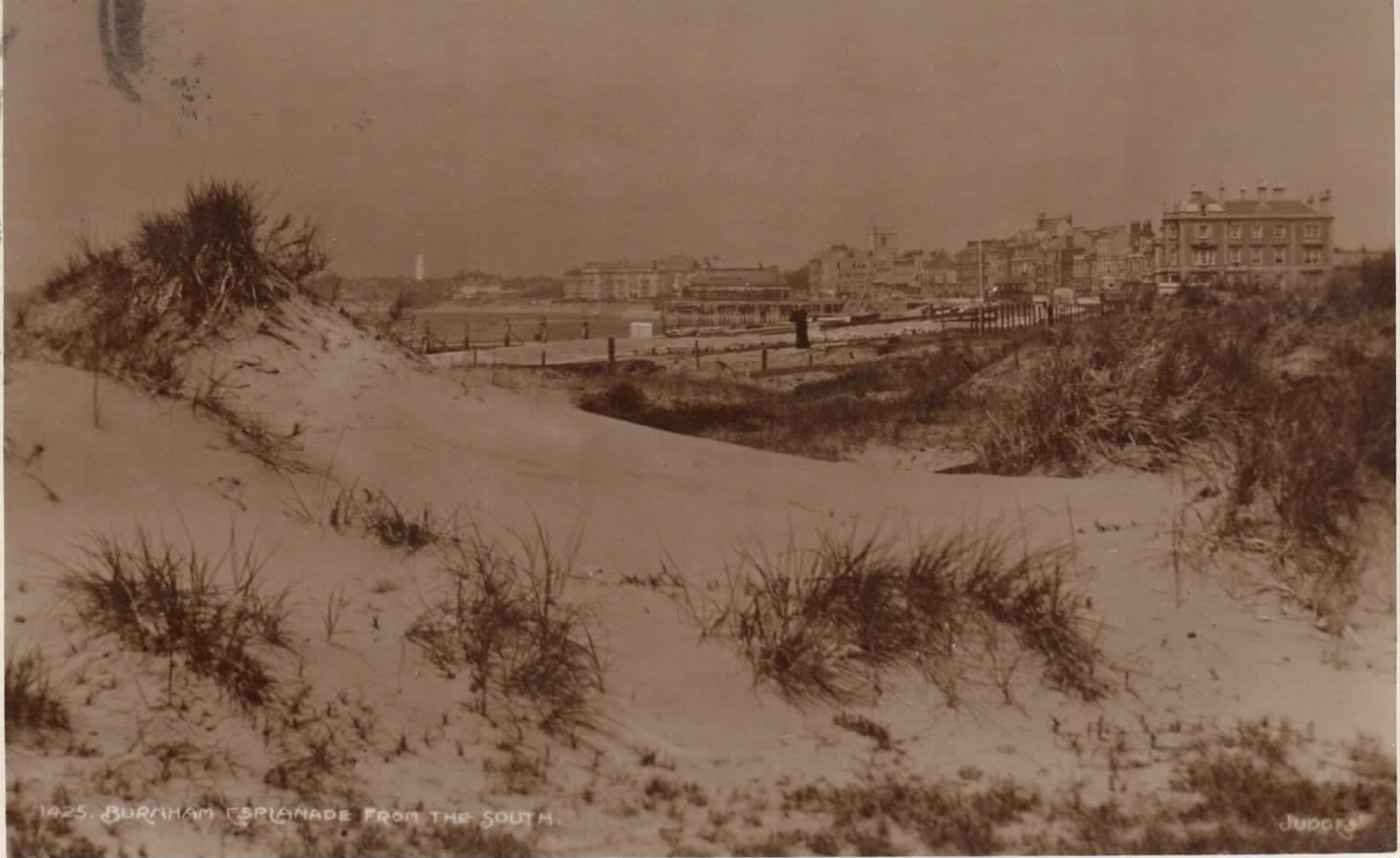 The next picture gives a good view of the newly cut South Esplanade and Marine Lake, and the amusements which sprang up on the Chinatown site. The entrance building to the Lake can be seen but  the Marine Cafe has not yet been constructed. 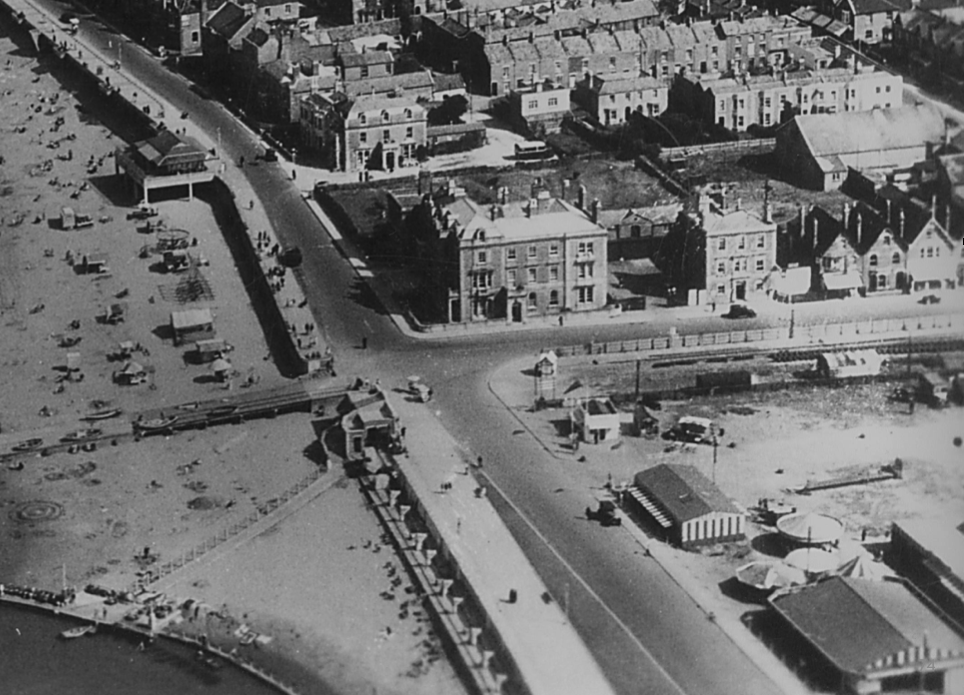 The postcard below, dated 1939, shows  amusement kiosks on the right and the remains of the rails to the jetty in the left foreground.  The popularity of cycle day trips in those days is demonstrated by the ‘cycles stored’ sign in front of the structure at centre. 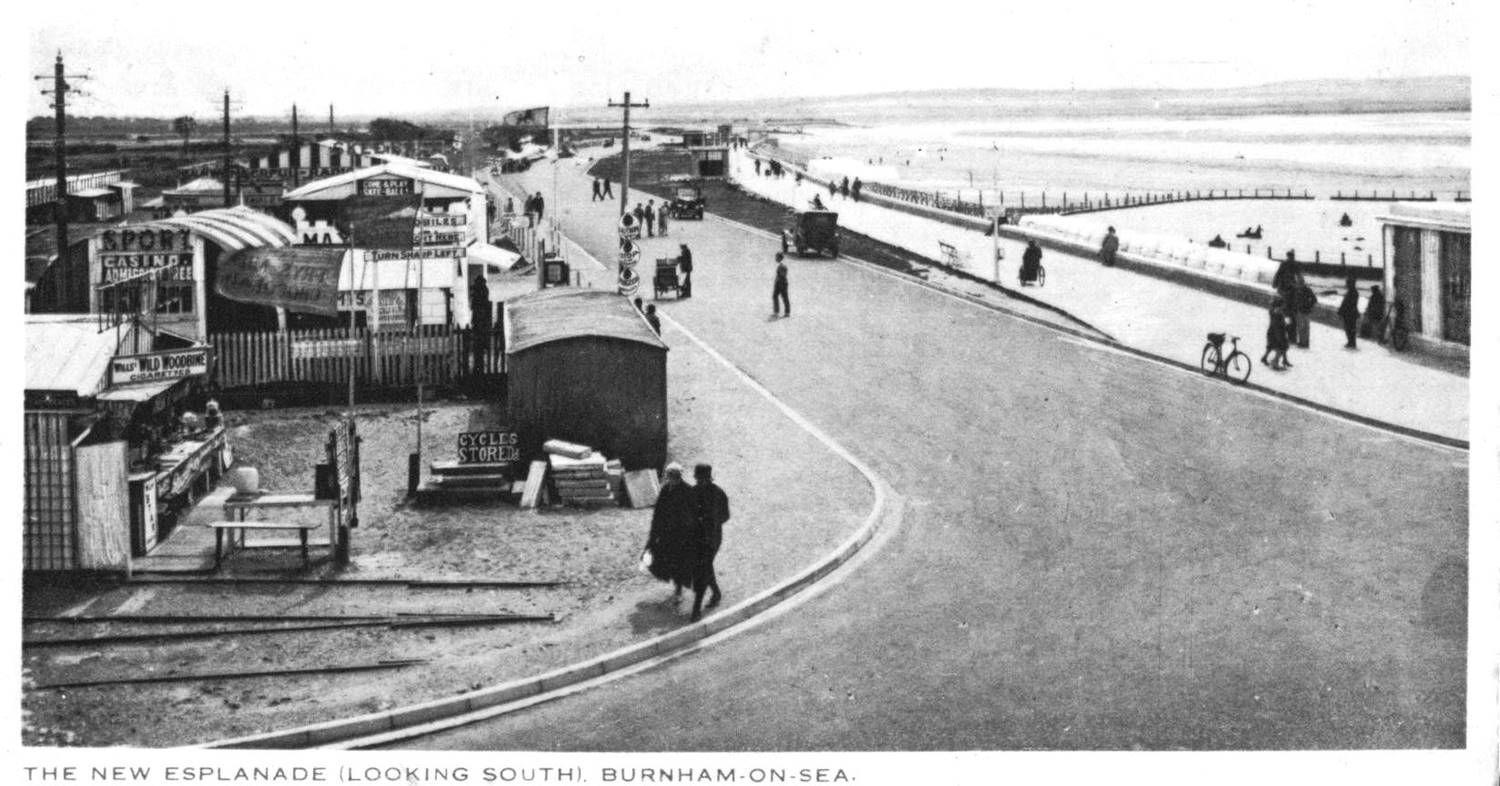 Bob Marchent took up a concession selling  ice creams from  the entrance building to the Marine Lake. 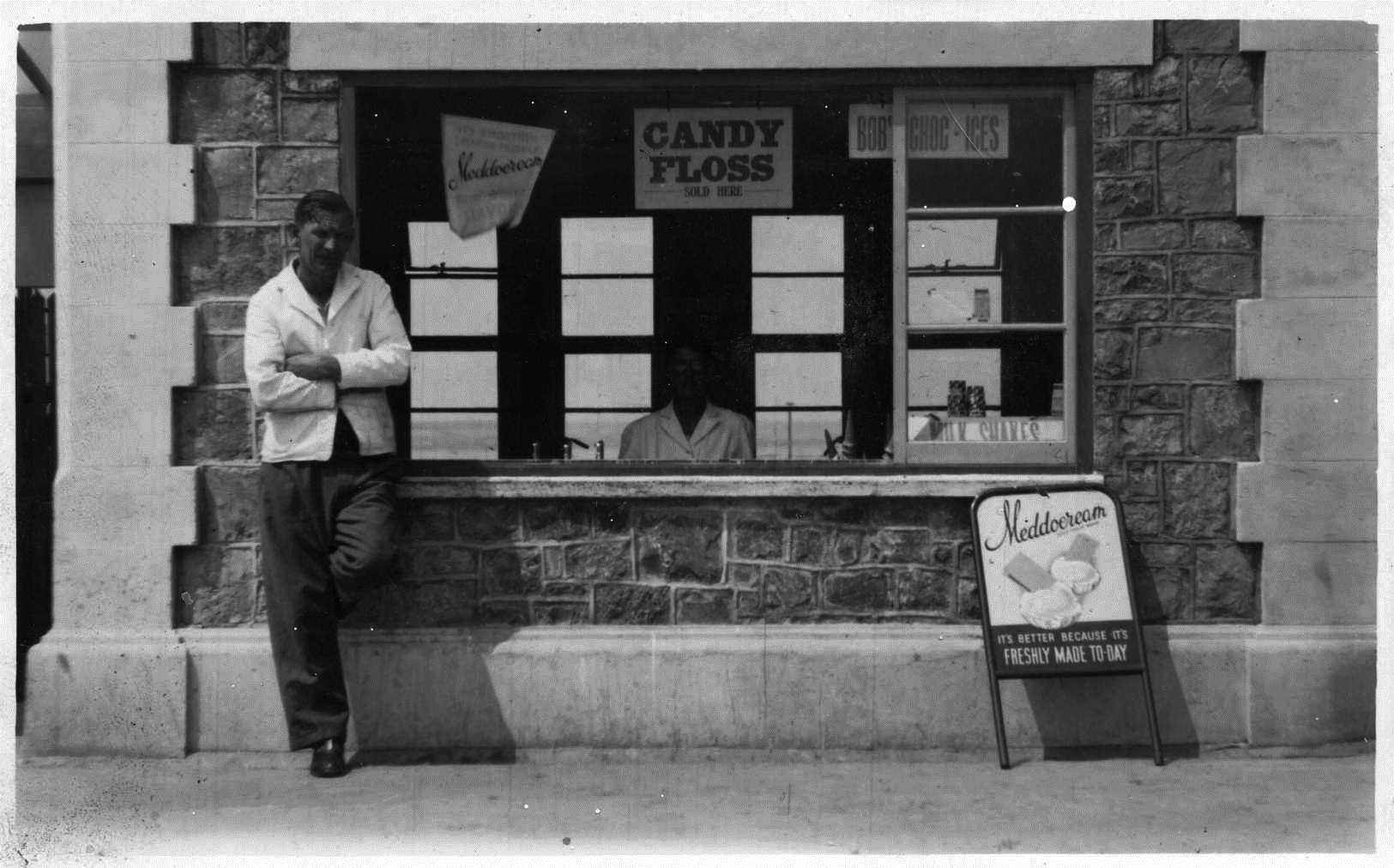 The Marine Cafe was later built alongside the entrance. 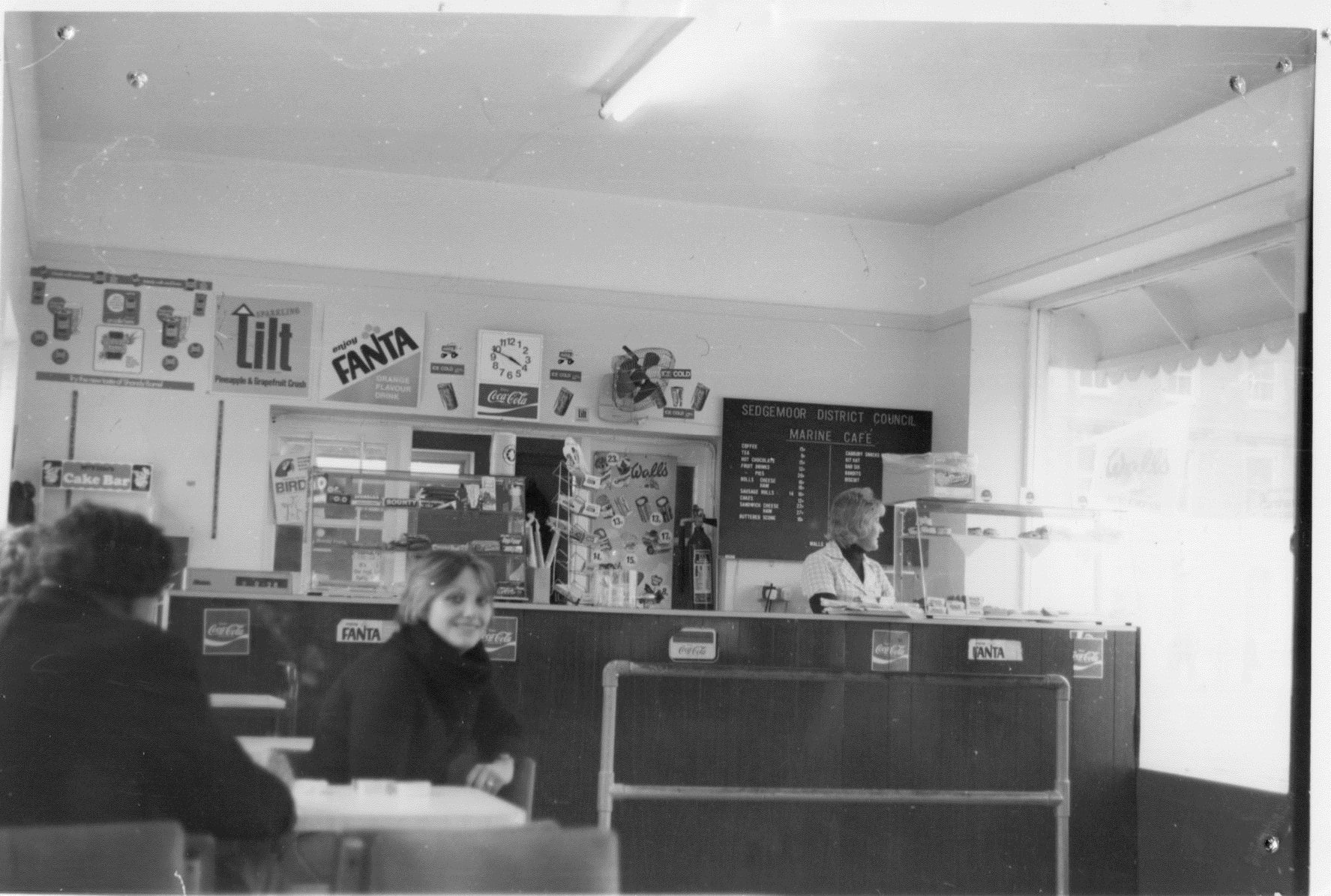 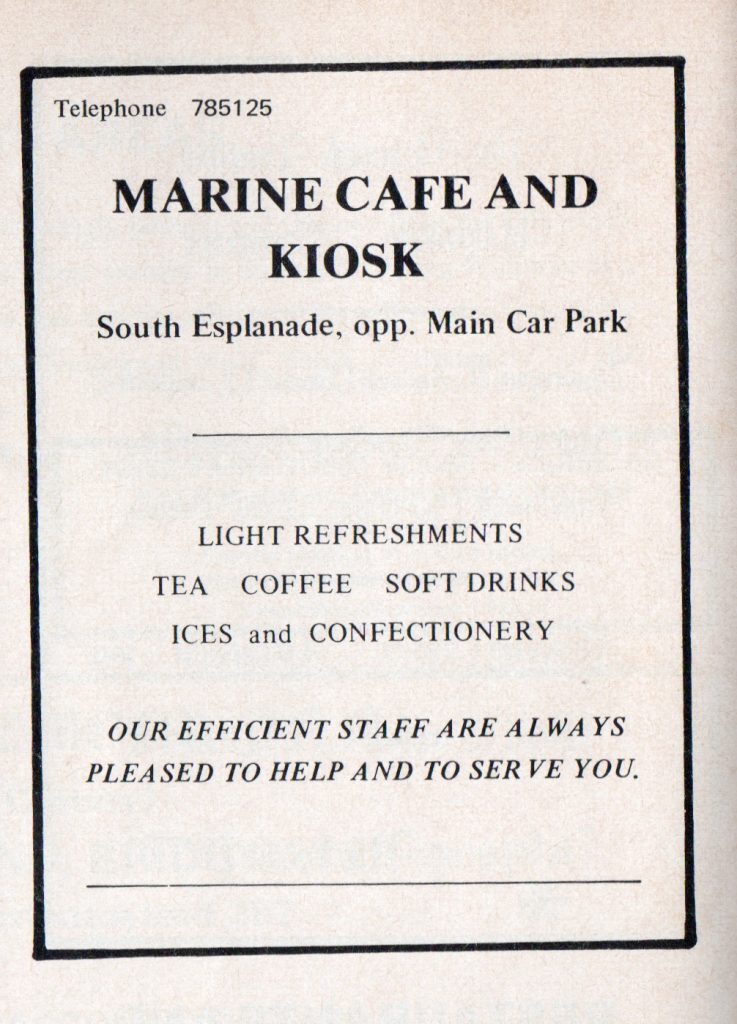 Advert above from Burnham Guide 1975

This stood on the site now occupied by the Sea View Cafe and its forecourt. 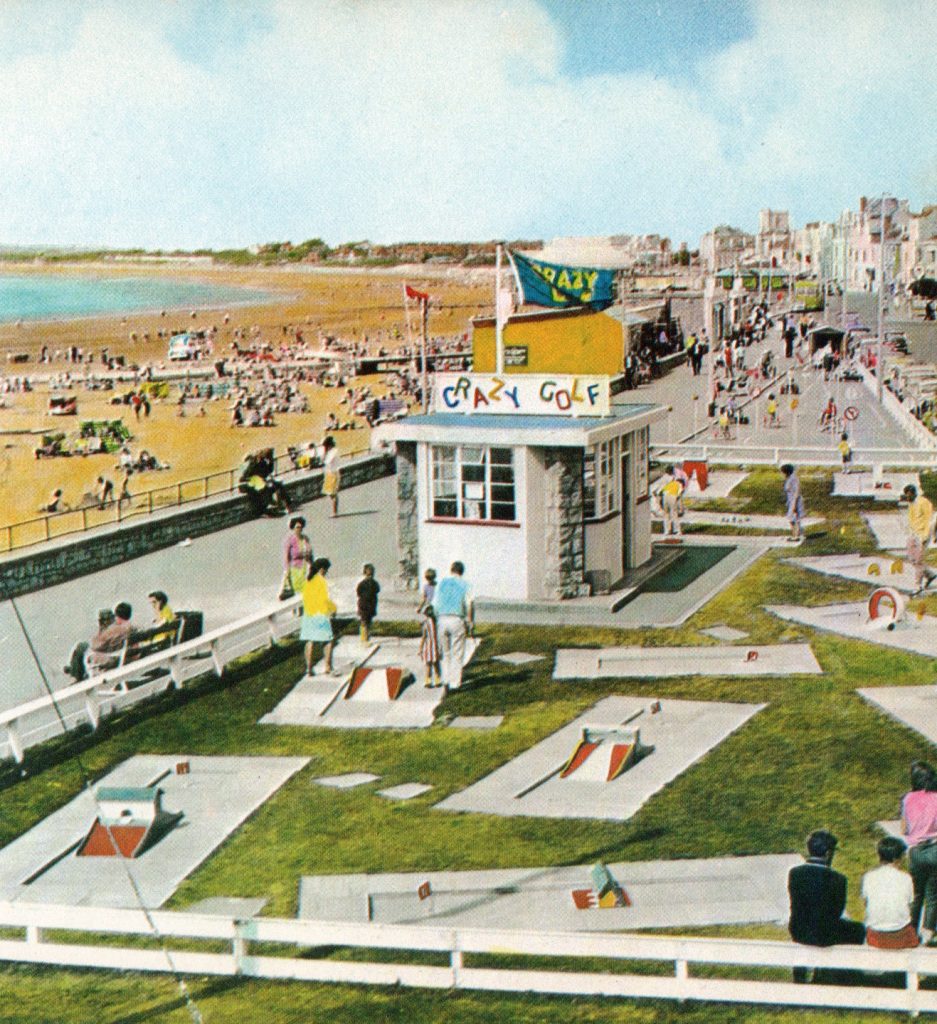 Above picture from Burnham on Sea Guide 1967

Below, amusement arcade 1965. The same building as yellow one on picture above.  Also pictured from rear on Marine Lake  page. Thanks to James Murphy for use of the photograph and for identifying the boys (see comments at bottom of page). 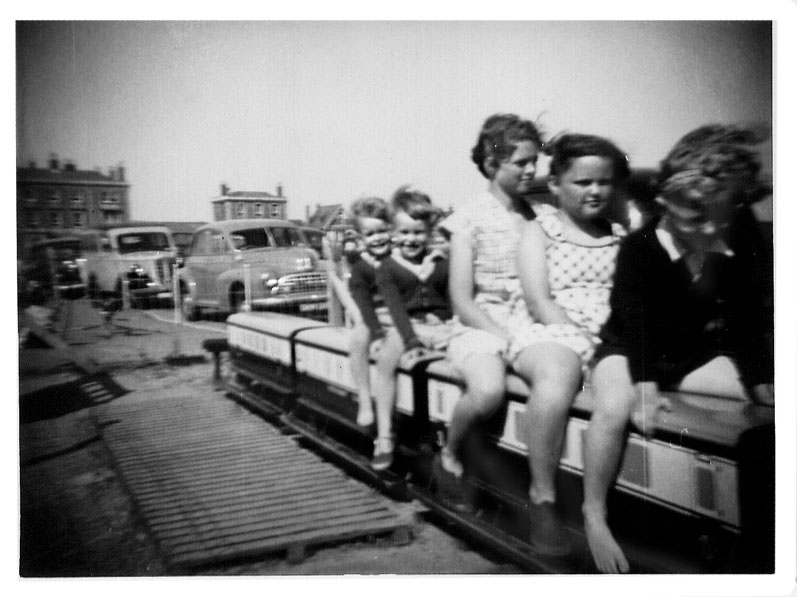 This picture appears to be from the 1950’s. A later and rather less interesting replacement can be seen below. 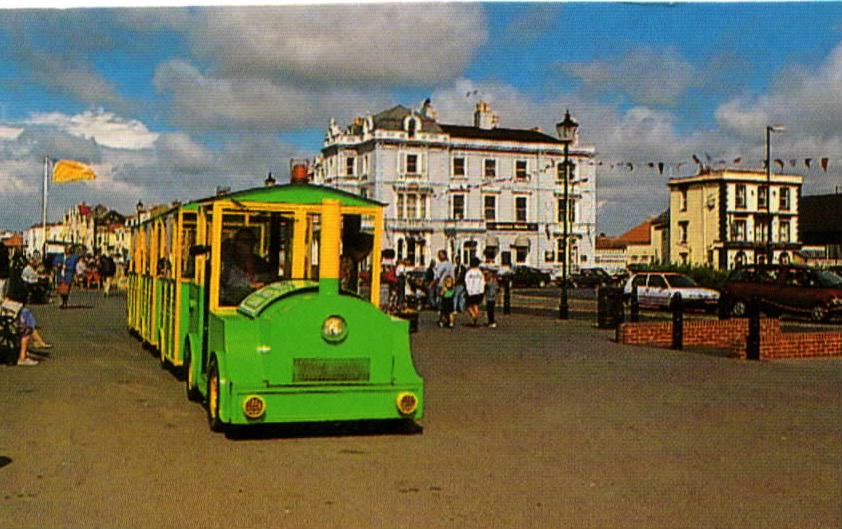 The ‘Band Shell’  stood further south along the Esplanade on the site now occupied by the ‘arena’ opposite the flats.  It was demolished during the building of the new sea defences. 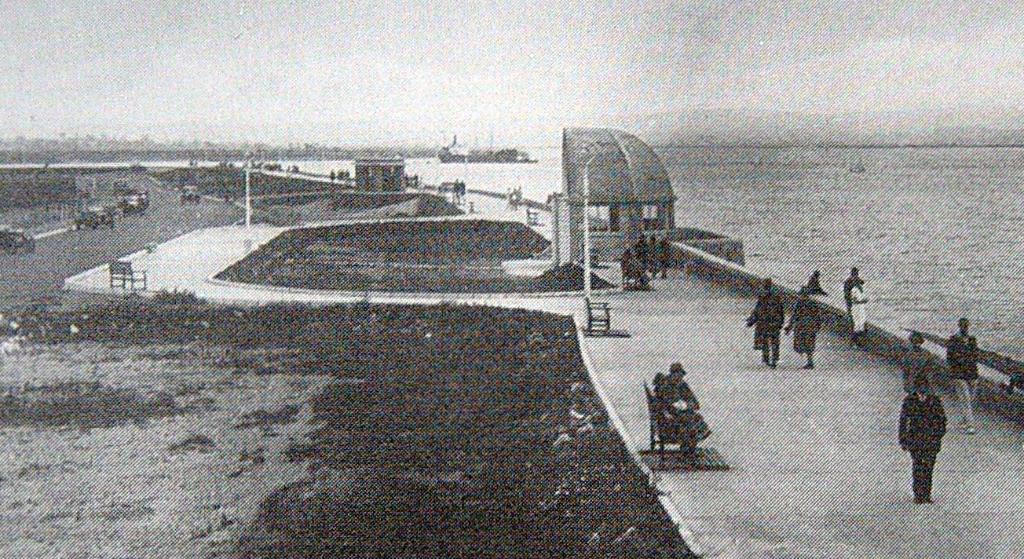 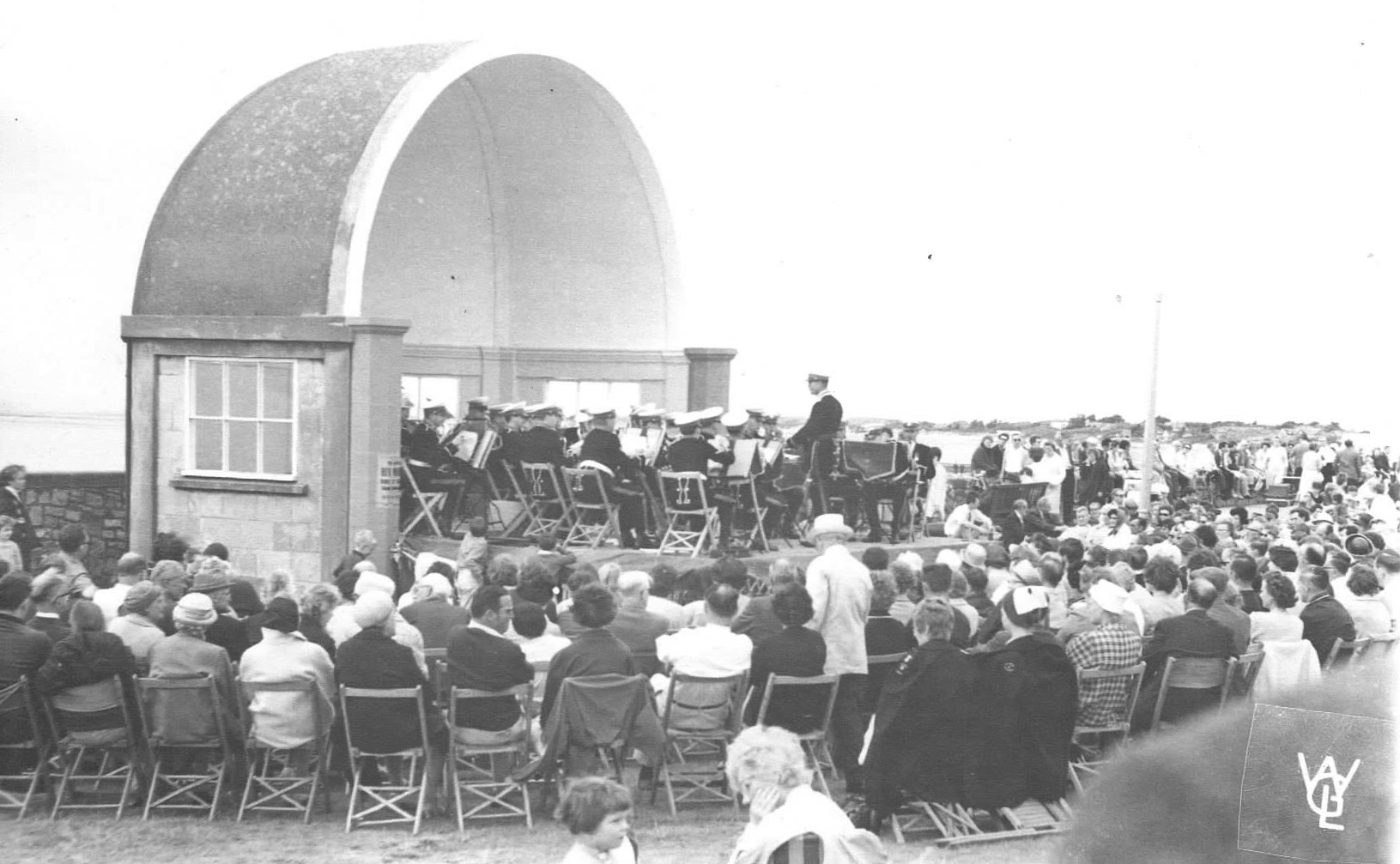 Above is a picture of the Royal Marines Band giving a concert in 1969.

At the far end of the South Esplanade was land originally belonging to Pillsmouth Farm (birthplace of Richard Locke) There was a camp site here and eventually the a housing estate and the Holimarine Park were developed on the site in 1963-64. 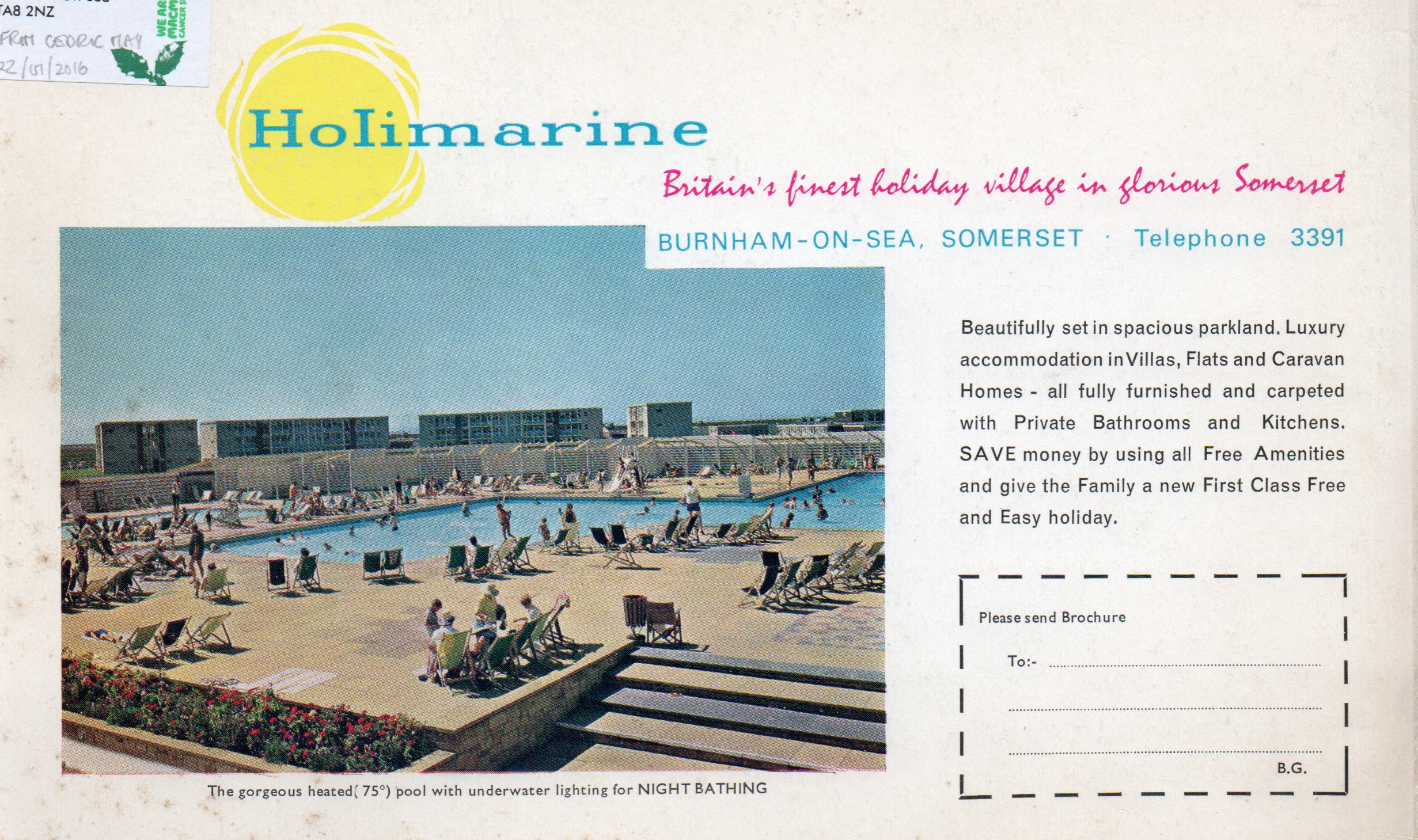 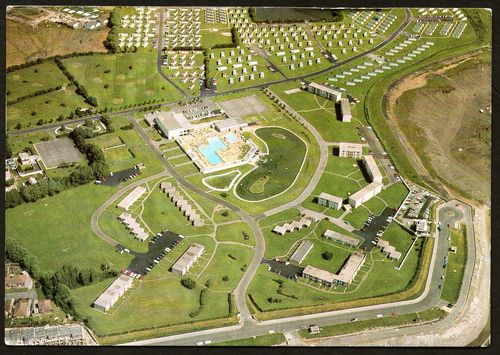 Below can be seen the whole of the South Esplanade area before development (from o.s. 1844-88). 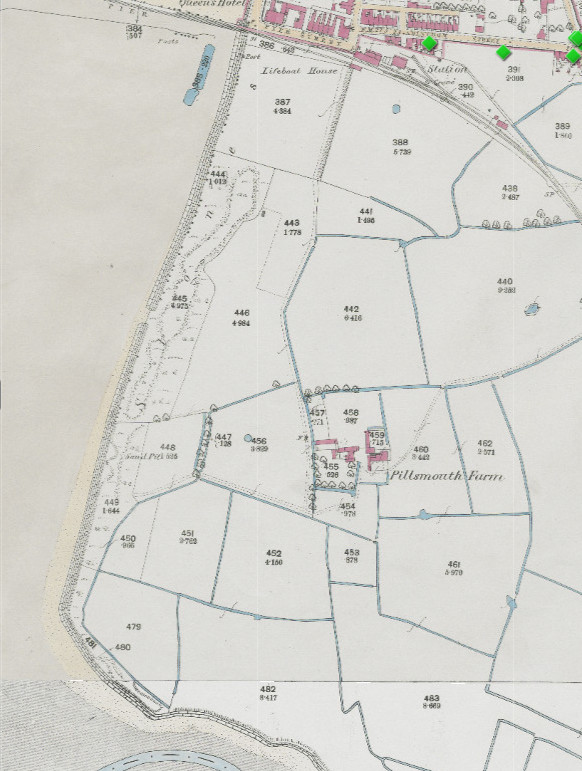