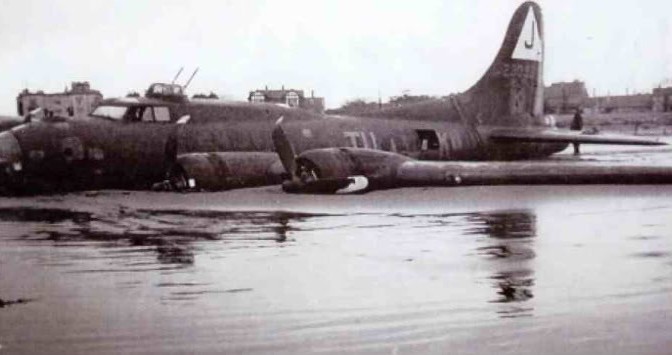 One night in March 1836, amid tremendous gales and high seas, two ships were swept onto the Gore. One ship named “The Margaret” was carrying coal. The Captain had his wife and children aboard as well as the crew. As the ship listed the coal in the hold shifted, so making the vessel list even more. The second ship named “Moss Rose” of Bridgwater was also in serious trouble.

Three men, one being Reverend David Davies, took the largest boat available, and attempted to row out to try and save the people on “The Margaret”. Sadly, it was an impossible task, and the family and the crew were lost. Undaunted, and joined by two more men, they set off again and managed to reach the “Moss Rose”, saving all her crew. For this valiant attempt, a commemorative plaque was placed on the sea wall, and a wealthy businessman presented Burnham with its very first lifeboat. The name is unknown, as unfortunately many early records have since been destroyed.

Thanks  to June Hill for kind permission to use  the extract above from her book “The History of the Burnham Lifeboats”.

In September 1883 the brigantine Milo,  out of Rio Grande with a cargo of wet salted hides ran into trouble in Bridgwater Bay. The Burnham lifeboat “Cheltenham” went to its rescue on September 3rd  when it grounded on the Gore Sands. The lifeboat “Remained by Vessel”, presumably in case it was called upon to relieve the crew or cargo, which was said to be valued at £10,000 . The report of the Board of Trade enquiry  below, from the Western Daily Press, indicates some dispute about who was responsible. The man at the centre of this was a ‘pilot’ co-incidentally named George Reed. 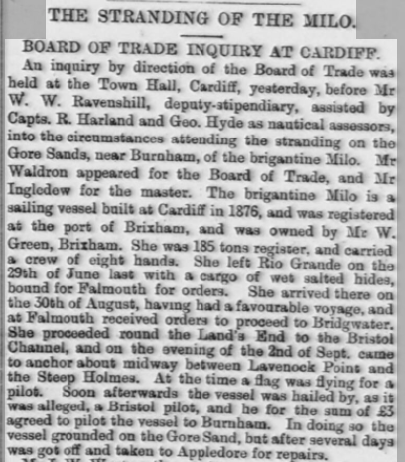 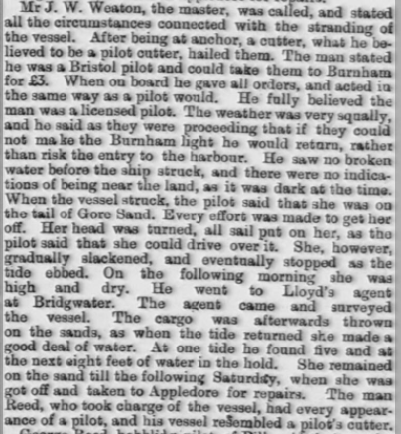 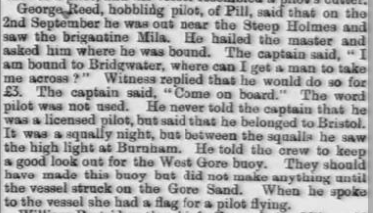 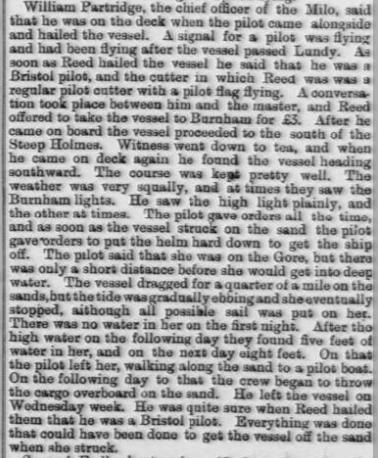 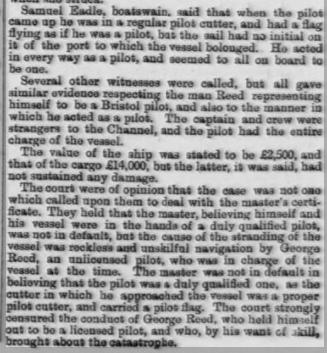 The log of the Cheltenham Lifeboat below has an entry for the Milo rescue. 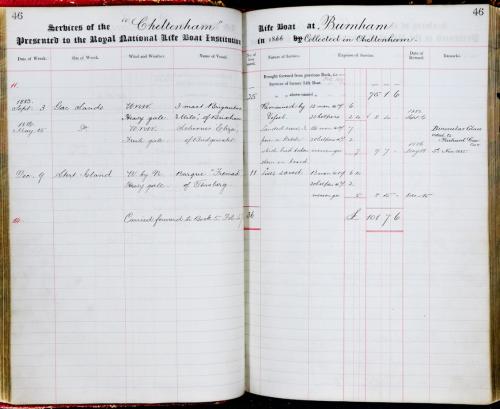 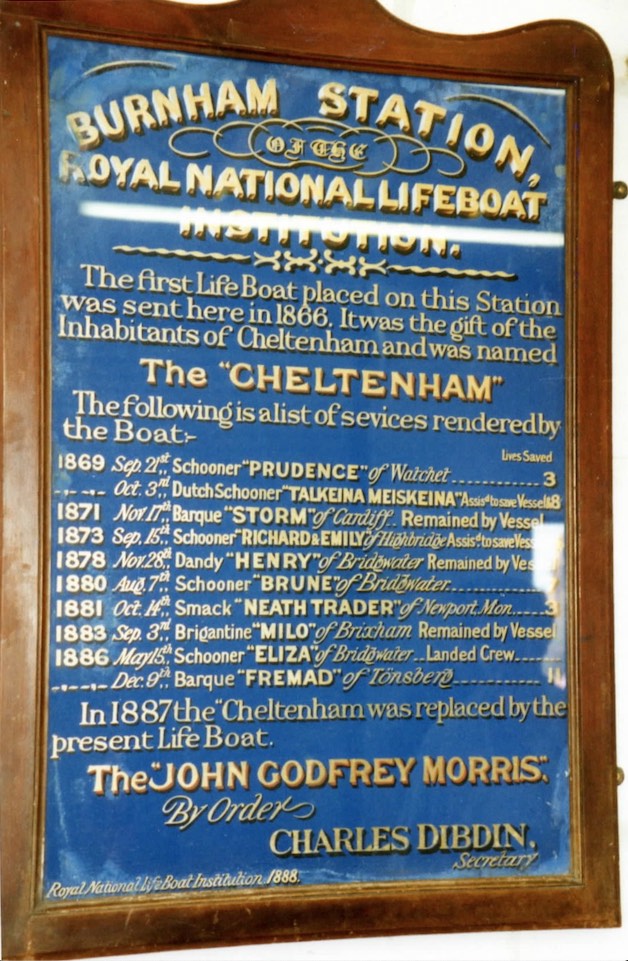 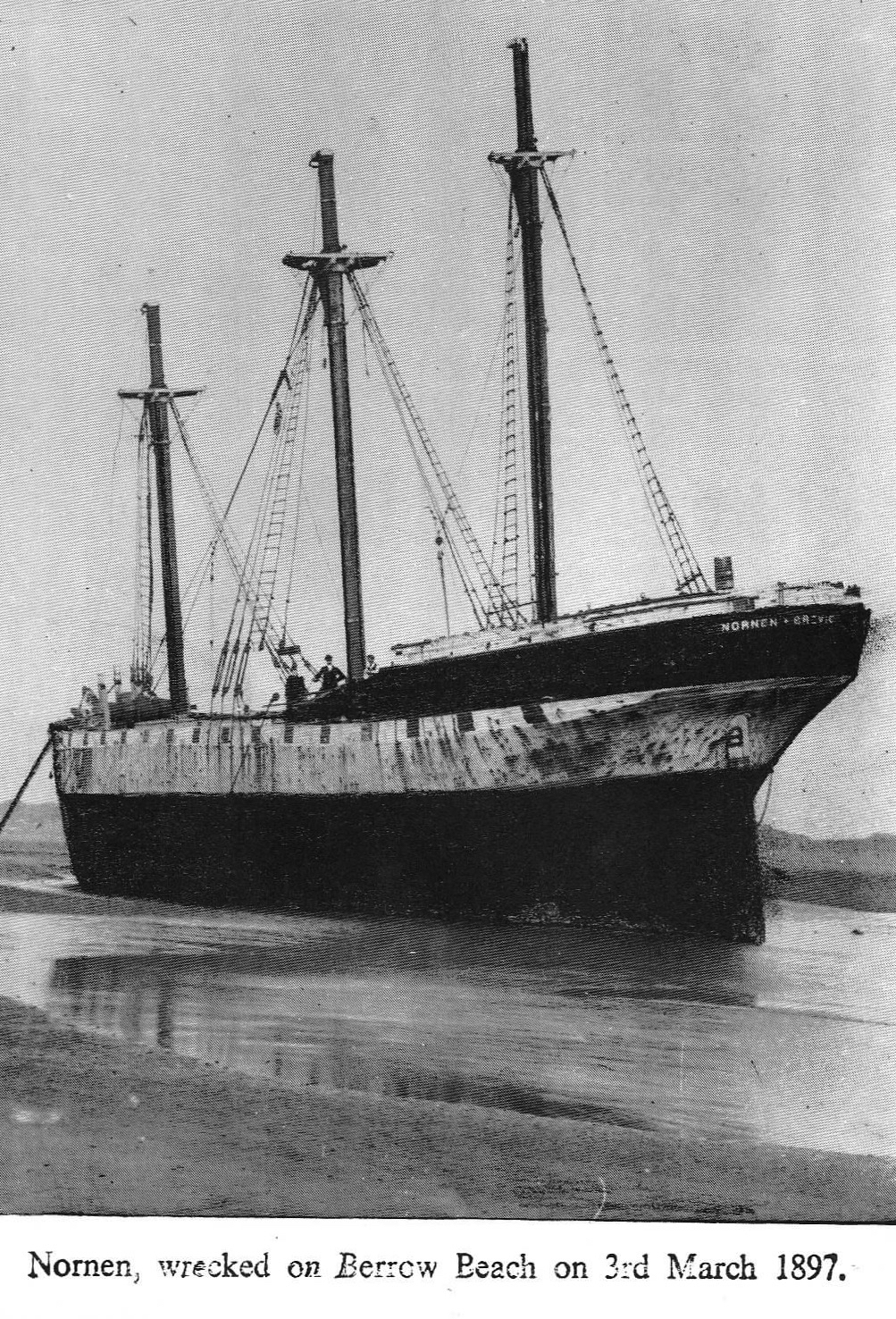 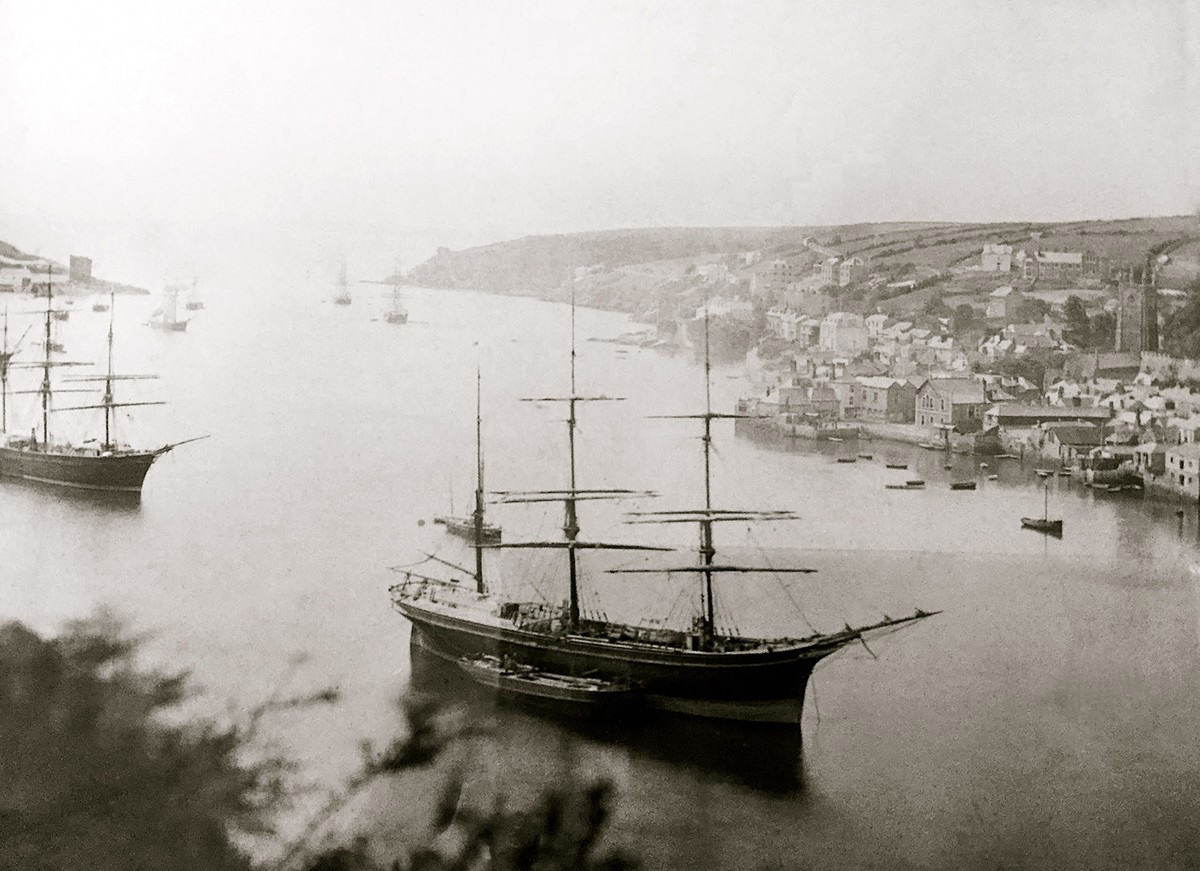 Above: (from an article about ice exports on  http://www.brevikhistorielag.no) ‘The Bark “Nornen” from Brevik, belonging to shipowner Samuel Christian Larsen, here anchored in French port. With Severin Paus as skipper, “Nornen” made a trip to New York with ice in the 1890s. The ice was loaded at Skjerke ice in Bamble. The journey across the Atlantic took 22 days. The risk of such a long voyage was too great, so [there was only] one trip. Photo: Brevik historielag’

During early March  1897  the seas around the British Isles were subject to heavy gales. Bridgwater Bay did not escape. The steamer Bulldog of Bridgwater and the schooner Richard Cobdon drove ashore at Dunball Sands on the night of Tuesday March 2nd. The outward bound steamers Collier, Devonia and Ethel put back into the River Parret for shelter. Further up the coast the driving snow and sleet was reported at Portishead as being of hurricane force. The Raf from Norway succeeded in obtaining a pilot for Bridgwater but came ashore at Burnham in a damaged state. The ketches Magnet and Good Templar were stranded also but without damage.

All these vessels were subsequently refloated but the wooden Barque Nornen was not so lucky. She was listed in the Port of Bristol Bills of Entry on 7th January 1897 as bringing resin and turpentine from Brunswick, Georgia, U.S.A. On 1st February she was cleared out for foreign parts and sailed for Brunswick on the 8th February under Captain Peder Olsen. What happened between then and the 2nd March is a mystery but it is possible that the Nornen  had tried out to ride out a storm in the lee of the Lundy Roads but lost all her sails and was driven towards Berrow mud flats.  About 9 am Wednesday March 3rd, when the mist had cleared, she was observed in the bay apparently ashore at the tail of the gore sands,

The John Godfrey Morris lifeboat with 10 oar and 13 crew, was launched under coxswain Mr Alfred Hunt. A rather tedious and circuitous route had to be followed and before the lifeboat could approach the stranded vessel she had been grounded in shallow water. Her captain went over the side and waded ashore but the crew of 10 and their dog could not be persuaded to follow suit so it was up to the lifeboat to land them in very difficult conditions owing to the gale and proximity to the shore. 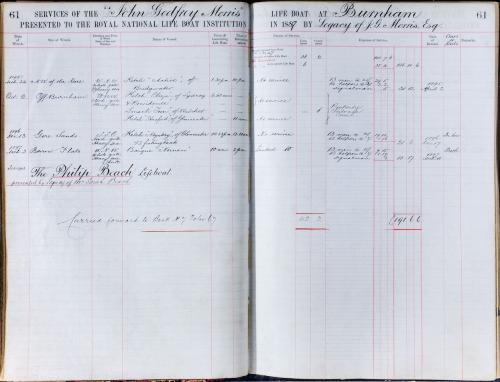 The rescue is recorded on the honours board of rescues made by the three lifeboats at Burnham during the period from 1867 to 1930 and which today stands in the entrance to the Burnham RNLI Station.

It is a tradition with at least two local families that comforts were provided for the ship-wrecked crew. The late Mrs. Lily Paler of Mount Pleasant, Berrow took tea with her father across the dunes to the men. Likewise the Anderson family took crew members into their home, to dry out. As a reward they were given the figurehead which for a long time stood at ‘Figurehead Cottage’ on the Berrow Rd and is now on display in Berrow village Hall. 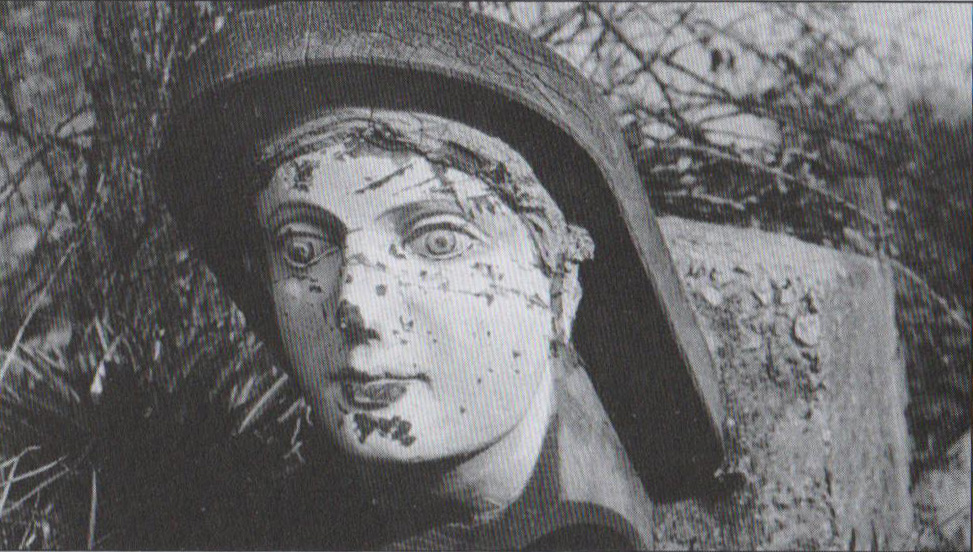 The Captain and his dog, a great dane, were taken into Rose Tree Farm in Barton Rd. Peter Tidball recalls his aunt describing how  the dog would stand guard at the door.

John Tidball, who drove his horse and cart to the stranded vessel to help the crew retrieve their belongings,  with his family taken outside their Farm house in the same year as the Nornen came ashore. John is leaning on the gate and the little girl is Victoria Beatrice Tidball who lived to be in her 90’s was the person who told the story of the Captain staying at the farm house, and remembered his Great Dane dog guarding the front door. Ann Tidball, the old lady in the photo died on Boxing Day 1897, which helps with the dating of the photo. (Information provided by Peter Tidball.)

Attempts were made to lighten the Nornen and refloat her but without success and she was driven higher up the sands by a second gale. She was sold as a wreck on 2nd April 1897. The remains can still be seen today.

An anchor was found in October 2009, in the mud, close by the wreck. The Bristol Industrial Museum concluded it was too small to have been her main anchor but may have been one of two side anchors used to try and keep her stern on to the tide and thus minimise further sea damage.

The information about the wreck is taken from the booklet ‘The Berrow Wreck’ by Christopher Jordan and published by Thornbury Press in 1978. Following several requests , asking for more information about  this wreck I have tried to contact both the author and publisher to obtain permission to use this material but without success. So please should anyone feel use of this is not entirely for education purposes please contact me via this website.   – John Strickland

Below is an oil painting of the Nornen being driven onto the beach. It is painted on a wooden panel  labelled on the back as being a panel from the ship itself. 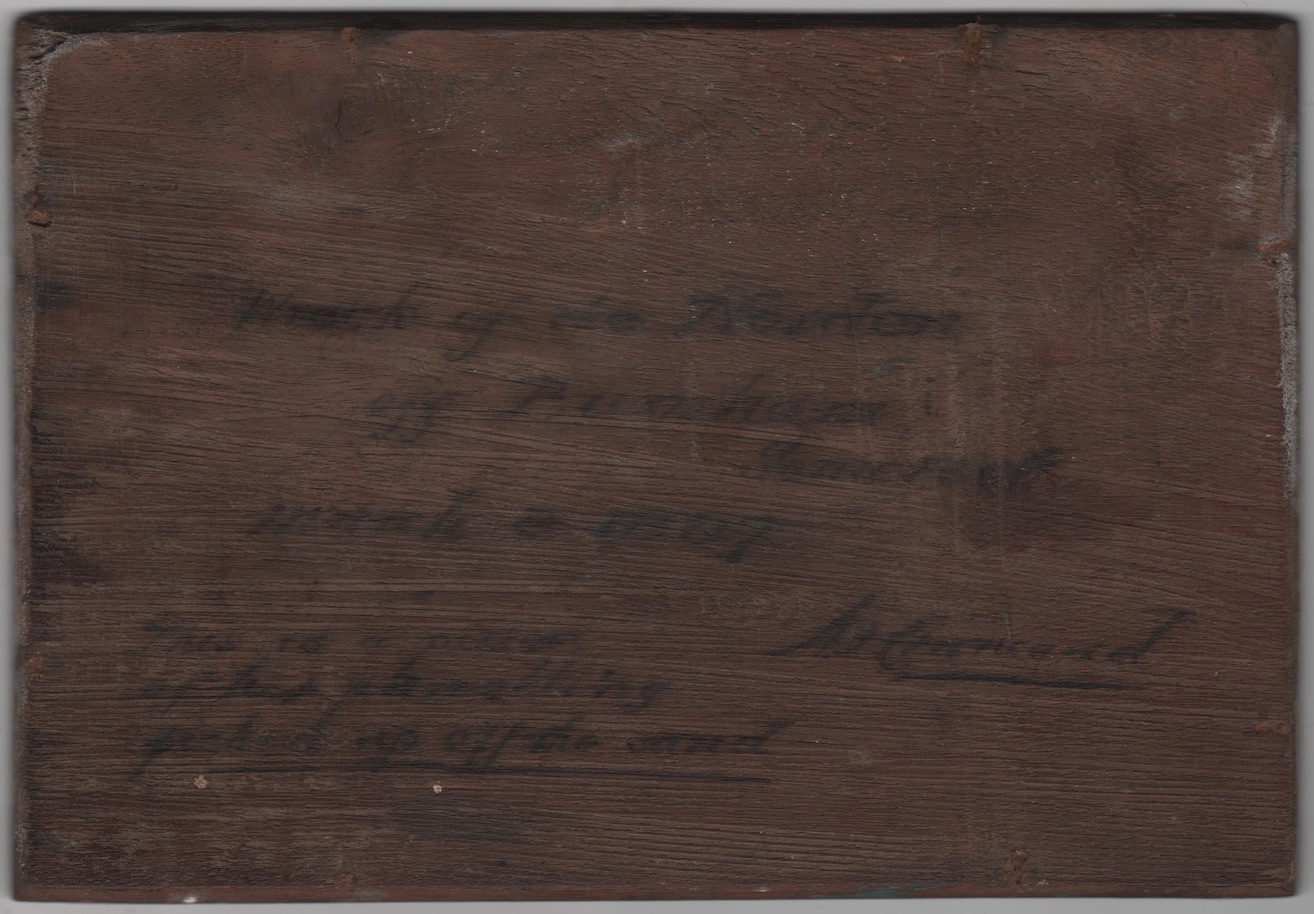 Below:  spoon from ship  given to a local family. Engraved with the ship’s original name “Maipu” and the ship’s bell. 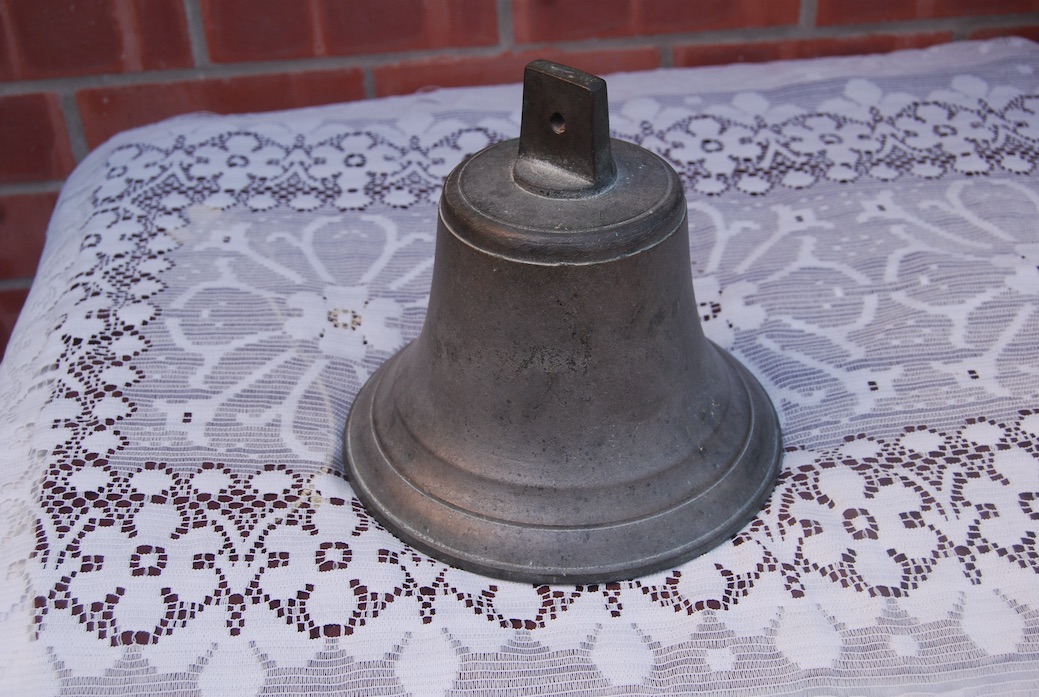 The next image was kindly provided by Nigel Stokes. Nigel was given the Sextant by Mr. Anderson , who lived at Figurehead Cottage, and knew Nigel planned to join the Merchant Navy . Nigel used the sextant many times in his travels at sea. Although we can’t be certain  the Anderson family connection suggests the sextant was from the Nornen.

Artist’s impression of the aftermath of the wreck by Bev Vincent: 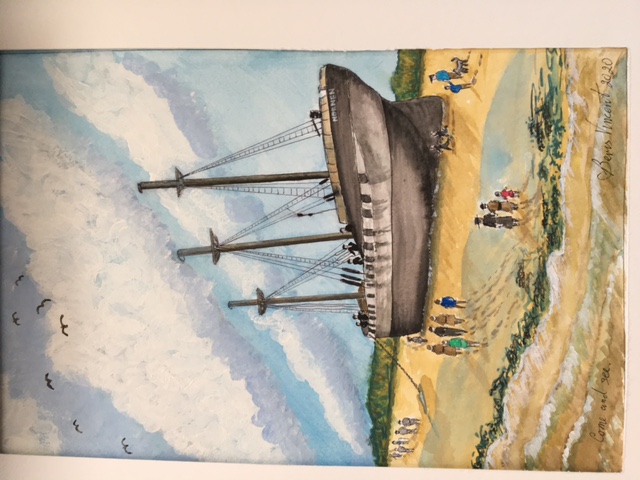 Further information about the Nornen can be found here:

(Some browsers offer a translation facility  when you access this site.)

Information about the Nornen Project 2022 can be found here:

It appears that The Speedy had a similar experience to the Nornen but may have eventually been re-floated as no evidence of the wreck remains now. 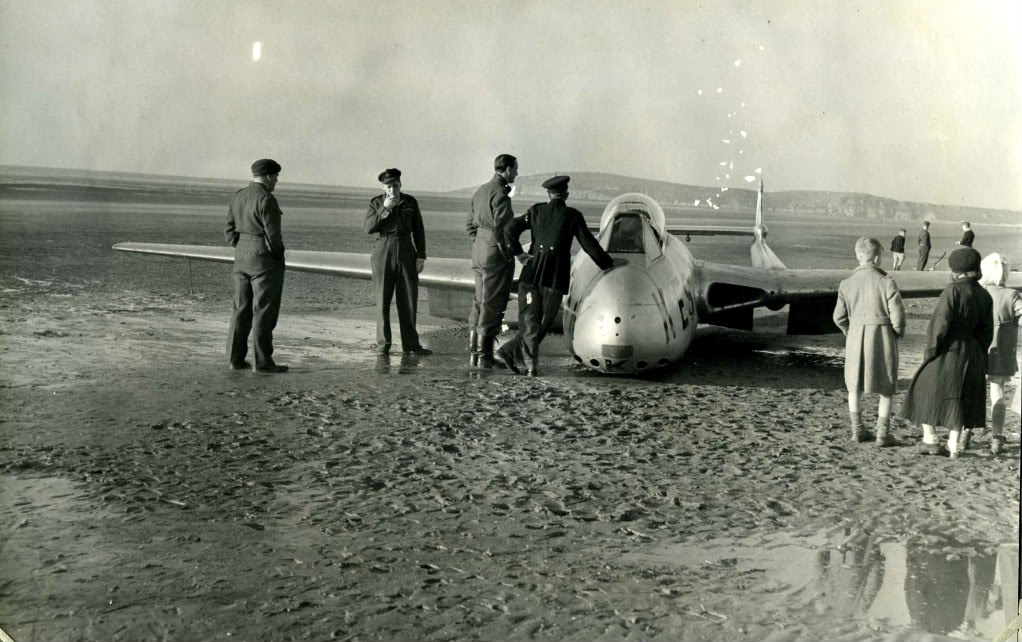 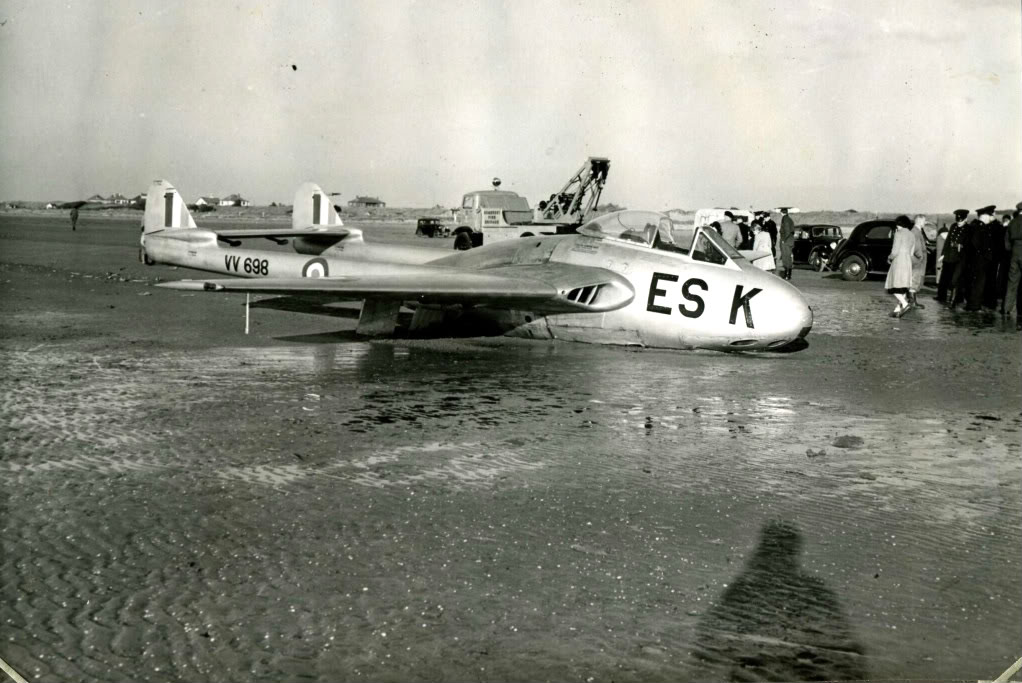 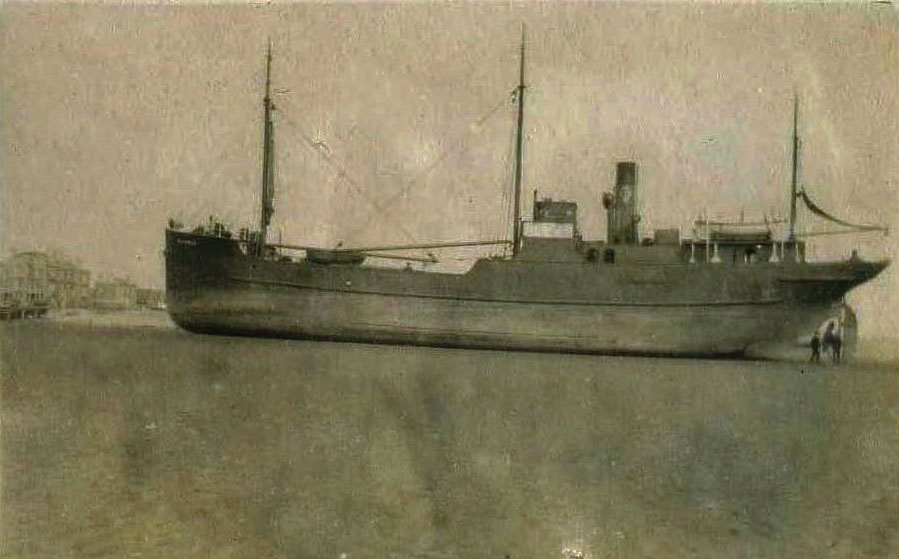 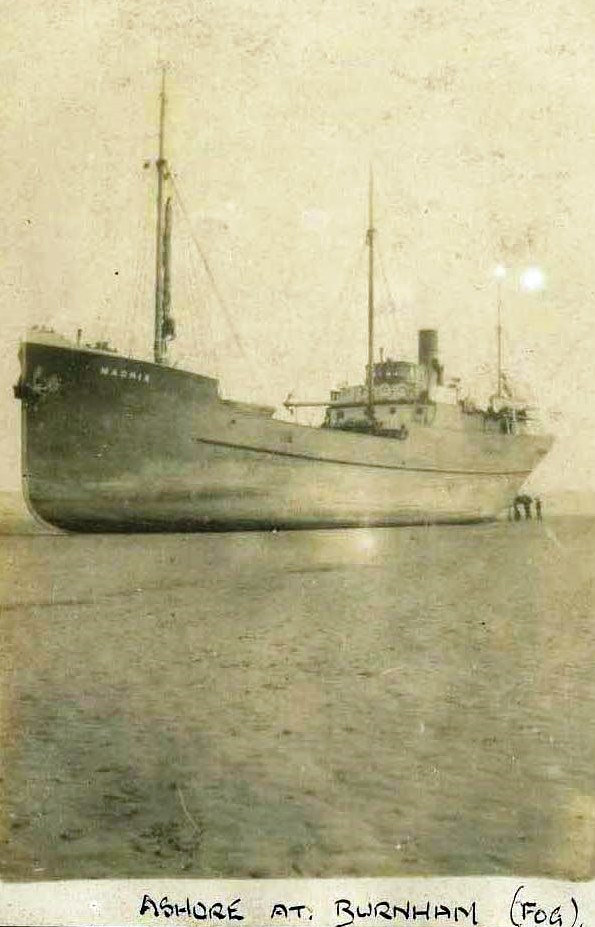 The vessel above appears to have the name ‘Narnia’. Though it seems C.S Lewis invented this name in the 1950’s in his fictional “Chronicles of Narnia” the date of the photos is unknown but they look older. It seems the name may have earlier roots, possibly relating to the   Italian town Narni. Any more information about this vessel would be welcome. 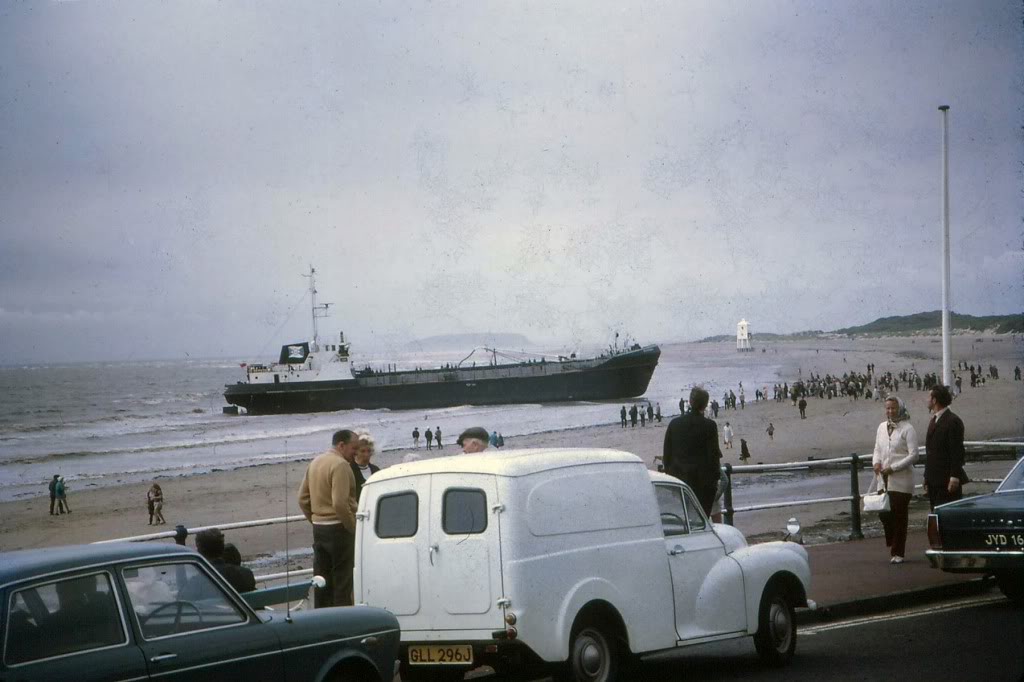 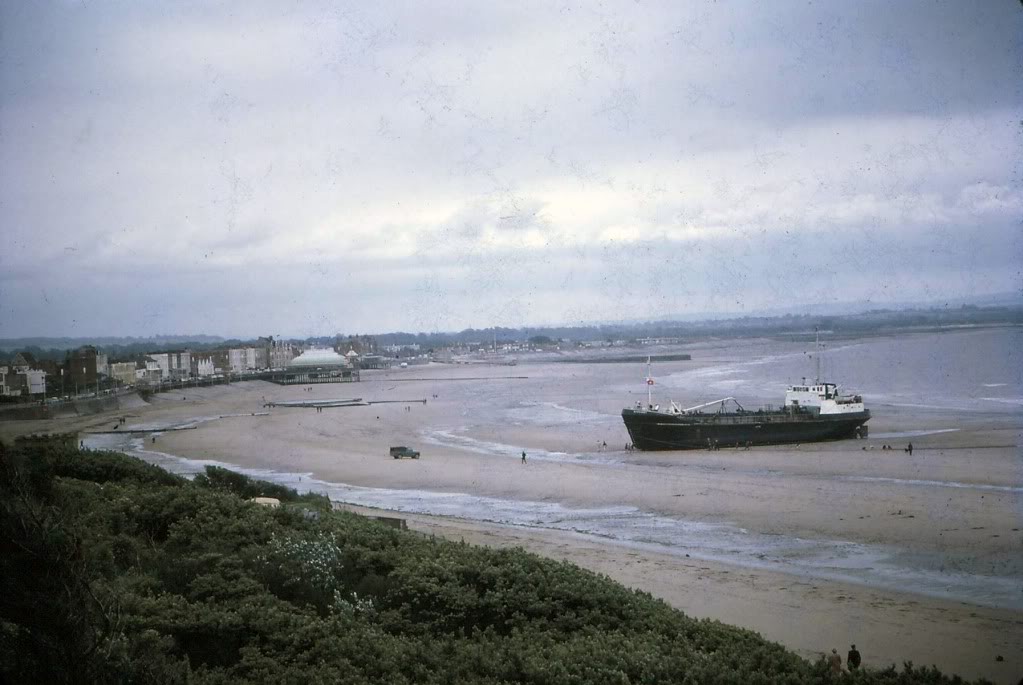 Oil tanker beachings weren’t that rare. Apparently when leaving Dunball empty in a South Westerly gale they were so high in the water their hull acted as a sail and their motive power was insufficient to overcome this so they were blown onto the sands.

WRECKS OF BRIDGWATER BAY: A REVIEW OF THEIR STATUS, HISTORY AND SIGNIFICANCE

The map below is from that study 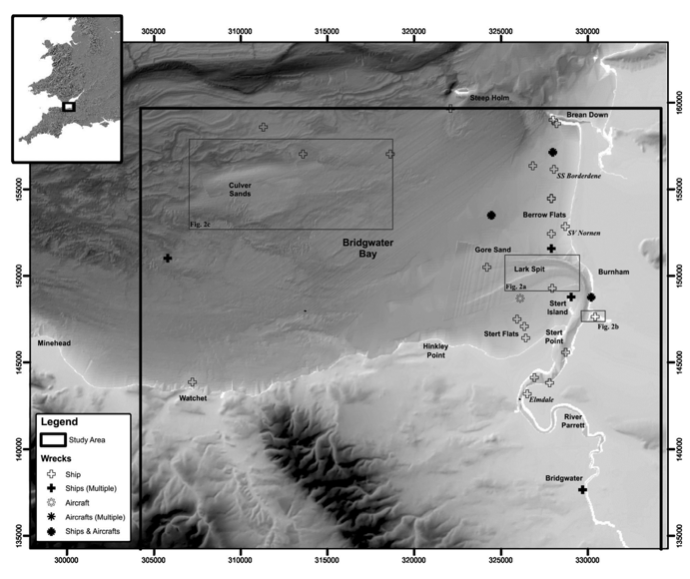 An interesting story of the proceeds of a wreck can be found in ‘Lympsham – A Scrapbook of Victorian Times’ by Peter Hopkins (1989):

In January 1900 there is a reference to the ‘Hicks Charity’, £300 bequeathed to the parish by Edmund Hicks which provided for the poor to receive 3 shillings worth of coal each on New Year’s Day. Hicks, a local farmer, lived close to Brean Down. One day when walking on the sands after a heavy storm he found wreckage, and amongst it a package containing Bank of England notes which he appropriated and bequeathed upon his death.

22 thoughts on “Crashes and wrecks”