Theodore Crane Dupuis was of Huguenot descent and was Vicar of Burnham’s St. Andrews church for almost five decades from 1867 until shortly before his death in 1914. 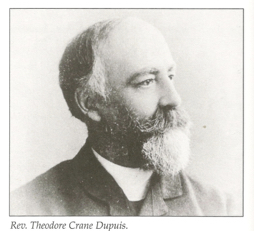 He came from a long line of clergyman including his father, grandfather and his younger brother. Many of the female Dupuis family married clergyman themselves, which is an illustration of how devout they were as a family. The Huguenots of France were exiled in 1685 after the Revocation of the Treaty of Nantes which had previously allowed Protestants to worship without constraint. Theodore’s great, great, great grandfather, Philip Dupuis was born in France in 1670 but emigrated to London at some point , dying there in 1706. The Book of Burnham says that he spoke English with a French accent “he spent so much of his early life in France”.

Thomas Sanders Dupuis (1733-1796), left,  who was a famous composer and organist and Master of the King’s Music to George III. Theodore Crane Dupuis was his great grandson.

Theodore was born in Park Lane about 1830, went to Pembroke College, Oxford where he earned a B.A. in 1854, followed by a M.A. two years later. In 1860 he was ordained and admitted to Holy Orders and his first position was Curate at Twerton, Bath. In 1860. Two years later he moved to St Cuthberts in Wells and spent 5 years there. He eventually came to Burnham in 1867 where he was inducted as Vicar of St Andrews, where he remained until his final years. He died on the 19th December at 4 Widcombe Crescent, Bath aged about 83 but was still conducting  services until about 1913. 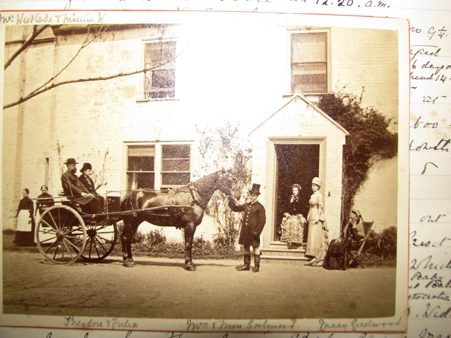 He married Julia Maria Bolton Salmond (1846-1911) at Widcombe Old Church, Bath on the 27th August 1879. She was the middle child of the Hon James William Salmond, who was a Freemason and was employed by the Dutch East India Company in the East Indies. Theodore and Julia had two children both girls. The elder, Juliet Grace Salmond Dupuis was born in Bath 17th October 1880. Her sister, Fenella Dorothea Trevelyan Dupuis was born in Burnham in 1882. She was  known as Dora.

His time in Burnham was eventful and by all accounts he and Julia were well liked and respected. The former Vicar, Rev Theophilus Williams, age 82,was said to be unpopular and his demise was not a cause for great sorrow. Theodore  was aged 37 when appointed to St Andrews which gave rise to some hostility amongst the local parishioners who would have preferred a much older, married man. He overcame this resentment by virtue of his quiet intelligence, humour, humility and forbearance. Two years later at the time of his marriage he and his bride were met at the station by huge crowds of supporters who unhitched the horses from the carriage and pulled it through thronged streets to the Vicarage. He was heavily involved with many local organisations and initiatives including the restoration of St Andrews, also renewing the bell cage; management and improvement of the  National School on the sea front; and serving as a board member of the Ellen’s Cottages  select committee. 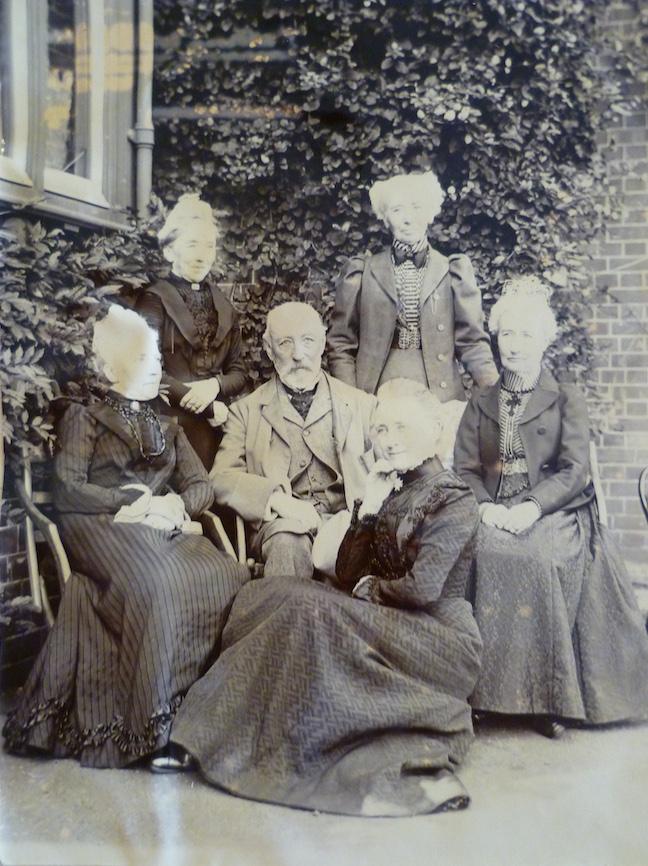 Theodore’s income was a £500 p.a. stipend (about £61,000 in 2021), together with the Vicarage. The average income in 1870 was about £50 p.a., so Theodore’s income would have been about ten times the average wage. This generous income combined with his wife’s family fortune, allowed the family to travel widely both in the UK and abroad. The most popular destinations were Nettlecombe where his younger brother was Rector, Oxford, Richmond, Goldsithney, Penzance, , where his married sister lived. His favourite place abroad was the Pyrenees, and the Auvergne. 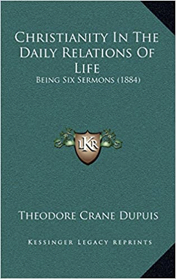 His wife, Julia was no less of a formidable character as was illustrated by her getting a potable drinking water supply into the town following a devastating flood in 1883. All of the wells in the town, including the one at the Vicarage were contaminated by sea water and this inspired her to bring a constant supply of fresh water from Winscombe to the town  in April 1888. An illustration of Theodore’s wife’s determination and self-confidence is the following story:

“Mrs E. McKie remembers as a child at Sunday School before 1910 hearing the vicar’s wife, Mrs E.( Sic) Dupuis, answering a question as to what the Queen was, replying she had the same sort of place in Britain as she, Mrs Dupuis had in Burnham” [A history of Burnham-on-Sea and Highbridge – V.J. Wrigley – Page 36] 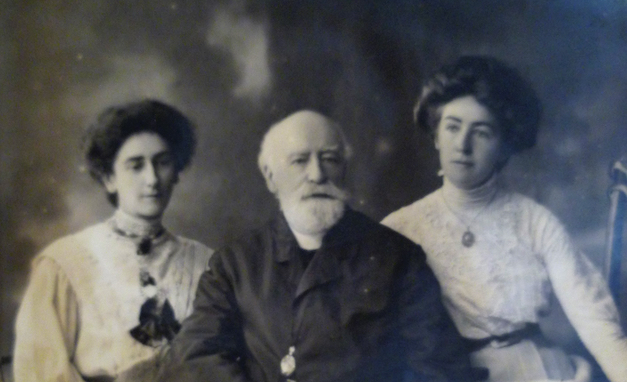 Above is a photograph of Rev. Dupuis with his daughters Juliet and Dora (see also Brean Down House School) taken on his 80th Birthday. Below is a clip from a local newspaper, found with the photo amongst the diaries. 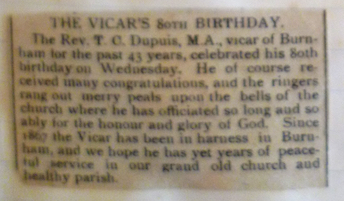 Both Theodore and his wife are buried in the same grave at St Michaels church, Brent Knoll.

Over 20 volumes of Dupuis Diaries now kept at the Somerset Heritage Centre which detail their  home life, travels in the UK and abroad, press cuttings, Parish Magazines and much local information for the period. These were compiled by Julia Maria for her daughters to have an understanding of their father’s life and work.

Below is an example pertaining to the water quality improvements. 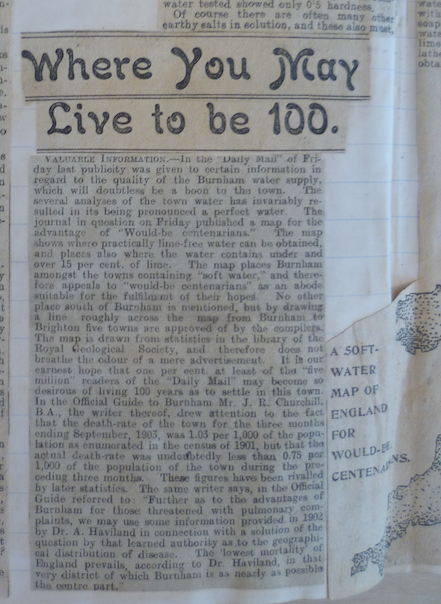 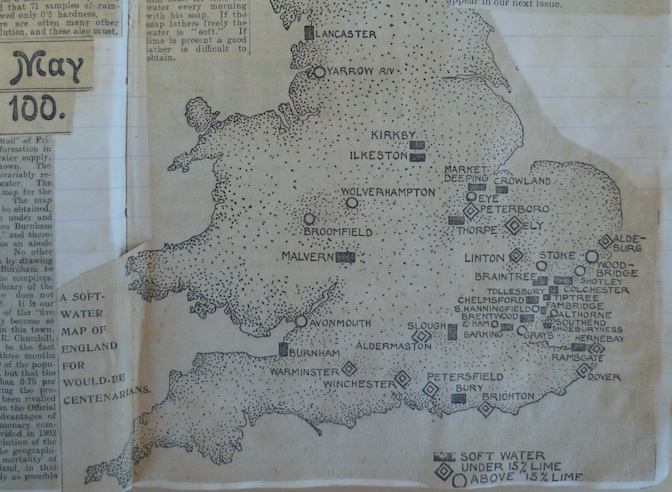