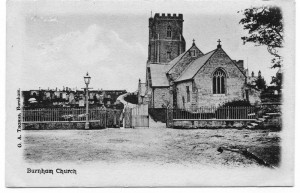 This is the Parish Church of Burnham-on-Sea. The oak door at the entrance dates from 1315 and was originally in the inner doorway. The porch was built in the late 14th Century. Inside the arch on the left, there is a little scratch sundial – early 13th Century. On the right is a Holy water stoup and a consecration cross is halfway up the arch.  A new sundial was fixed above the porch.

The main body of the Church was built 1315 and two feet below the present floor is the rough earth of an earlier Church. The Chance dates from 14th Century and was restored in 1878. The windows in the Nave are 14th Century. The Aumbray (recess) on the North wall was discovered at the time of restoration in 1974. On the South wall in the West window are fragmented glass-work – typical of Somerset craftsmen in the late 15th Century.

The ceiling was added in the 17th Century.  The brass chandelier dates from 1773 and was made in Bridgwater by Thomas Bayley.  The chandelier, previously cleaned with Brasso, was lacquered in the late 20th Century.

The sculptures behind the Altar, in the Nave window and in the Baptistry – were commissioned by James II and formed part of an Altar Piece for the Chapel of Whitehall Palace – they were designed by Sir Christopher Wren and are the works of Arnold Quellin and Grinling Gibbons. They were taken from Whitehall to Westminster Abbey and by order of Queen Anne, placed behind the High Altar. The Dean and Chapter removed them about 1820 and the Bishop of Rochester, Dr. Walker King who was also the Vicar of Burnham for 27 years, obtained them for this Church.

The North aisle and gallery were added in 1838 to meet the need  of visitors to the Spa in Steart House (off the Esplanade). The population of Burnham and Highbridge in 1801 was 653  and by 1841 it was 1469. The present population is 20,000. The extra seating was provided by the Curate who built the first lighthouse and owned  the Burnham Spa.

A large memorial on the South wall commemorates the Reed Family – George Reed had the Manor House, The Reed’s Arms Hotel, Catherine and Julia Terraces and the new National School built in Burnham. The pulpit is Jacobean with a modern sounding board – the wood has been repaired and painted many colours during the centuries. The present green painting in the Church was done in 1974.

Beneath the carpet before the step to the Chancel is a black stone with the inscription “Never to be removed”. Beneath this stone lies buried Richard Locke and his first wife.  Richard Locke lived at Pillsmouth and owned the land on which Burnham Holiday Village was built. He was a wealthy landowner and he devised the system of rhynes draining the levels.

The Chapel beside the pulpit is dedicated to St. Nicholas and used daily for private prayer.  A pre-reformation Altar Stone was rescued from the Churchyard in 1939 and is on the west wall. On the front of this stone are 5 crosses and on the back is inscribed “Sacred to the memory of William Harding who died August 2nd 1841 aged 63. Also Betsy, wife of the above who died October21st 1846 aged 65. Also Joseph Harding, who died August 29th 1834 aged 3 years. Also Rhoda Harding who died October 2nd 1853 aged 28 years”. Also in the Chapel are relics of a much earlier Church.

The stonework in the Nave was completely restored in 1974.

The wooden memorial bears the names of local men who lost their lives in the two World Wars and there are also mementoes of H.M.S. Burnham in the corner.a banner in the ship’s honour hangs in the Nave.  The tower is late 14th Century. Settlement took place immediately and it has been leaning ever since. 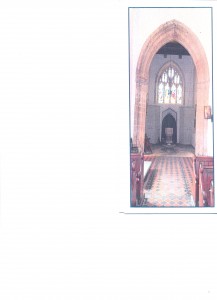 This short film from the Norman Gobey collection filmed on 9.5mm in the 1930’s shows the church roof in a state of disrepair, a local fundraising drive helped to repair it.

Discover the next location on the trail: 21. The Old Vicarage