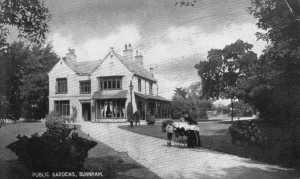 The Manor House is of early nineteenth century construction, built by George Reed as his main residence. Although Reed  referred to it as the ‘Manor House’ it does not have any official claim to the title.

The land on which the Manor House stands once formed, together with land adjacent to it, a larger area known as Gould’s Tenements. The house was built on the site of a smaller dwelling known as Home Field Cottage. This was probably part of Ropers Farm, the main house of which  stood on the site now occupied by Tregunter (See 19 on Heritage trail).

Reed Set out extensive gardens around his house with several glasshouses and many varieties of trees and shrubs, most of which have since been cut down. One of these was an ancient mulberry tree which had been propped up to keep it standing and had to be cut down for safety reasons during the 1970’s.  At that time it was estimated to have been about 300 years old. The presence of this tree may be an indication that this land had long been in use as a garden rather than as farmland. The gardens and glasshouses were opened to the public by George Reed in 1859, but at limited times and by appointment only.

After George Reed’s death in 1869 the property was inhabited by his daughter Catherine and son-in-law Major John Fryer until its sale at auction in 1903. The Council initially could not decide whether to compete and the property, together with Brunswick Cottage, was bought by a local man (for £3,250) who later agreed to resell to transfer it to the Council at no extra cost. After this the gardener’s cottage was demolished and the grounds laid out as a public park. The bandstand was erected and ornamental iron gates placed at each entrance. The opening ceremony was on 12th June 1905. The house has been used as both council and commercial premises since that time.

In 1912  Brunswick Cottage was demolished and a concert enclosure, stage and dressing rooms laid out on the site. Open air performances were given by players booked at the Pavilion and by beach entertainers. These kinds of entertainments decreased in popularity in the post-war period, but have in recent years been revived with a number of musical events taking pace each year.

The Tourist Information Bureau occupied part of the site for a period before moving to the South Esplanade.

This short film from the Norman Gobey collection shows the gardens being used to display a Messersschmitt as part of a local scheme to raise funds for the war effort.

Discover the next location on the trail: 17. War Memorial Hospital