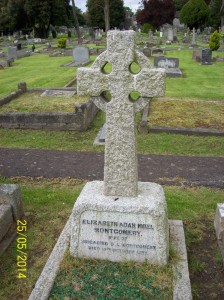 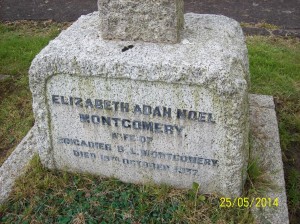 When Lord Montgomery (then Brigadier Monty) was forty he went on a skiing trip to Lenk, Switzerland, hoping to meet a young lady of his acquaintance. She did not turn up. However, he met a widow with two sons, Elizabeth Carver, known as Betty, who was about to study at the Slade School of Art. Her first husband was Oswald Carver, an Olympic rower in 1908, who was killed at Gallilpoli.

After meeting up a few more times, Monty proposed, and he and Betty were married in Chiswick in 1927. The marriage seemed odd to her friends, particularly as he insisted on a meticulous house and was a stern husband. She threw herself into being an army wife. They had a son born in 1928, David.

In the late 1930s Monty could see war coming. Convinced that England would soon be fighting, Monty set about training his new Brigade in Portsmouth, leading them through gruelling manoeuvres. For a treat, and to get away from this gloomy talk, Betty took 10 year old David for a beach holiday at Burnham on Sea, staying at the Richmond Hotel.

On August 21st  1937 she was on the beach with David when she bitten by an insect . That night her leg began to swell and she was taken to the hospital in Love Lane. Montgomery only visited her briefly, but by September he could see it was serious .

He insisted on sending David back to school, although the 10 year old boy seemed to be the only one who seemed to realise his mother was dying.

In October the doctors amputated Betty’s leg, but sadly on the 18th she died of septicaemia in Monty’s arms, at age 48.

Monty allowed no one from the family to attend the funeral. He was desolate. For four days he refused to see anyone. Betty’s death had caught him off guard, the man who prepared for every thing in such detail, had not foreseen the biggest tragedy of his life. She was the only one who loved him unreservedly, in spite of his eccentricities. (He had a very unhappy childhood, with many beatings and mother who had no feelings for him)From then on Monty sank himself into his work, and had no more distractions in his life.

One of Elizabeth’s grandsons by first marriage is Tom Carver a one time BBC Foreign correspondent.