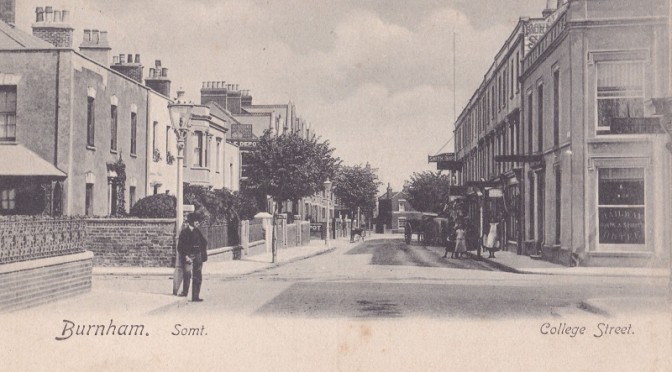 Follow the link below to see a .pdf of the occupancy of shop premises in College St. over time:

What later became the eastern end of College St. can be seen on the 1843 tithe map as a south eastern extension  of Victoria St. The Northern side of this was taken up by Ravensworth House  (follow link for maps) until the end of the nineteenth century. The 1884 Ordnance Survey map shows that by that time the western end of what was by now  called College St, had been cut through to the sea front and had incorporated and straightened the south eastern end of Victoria St. 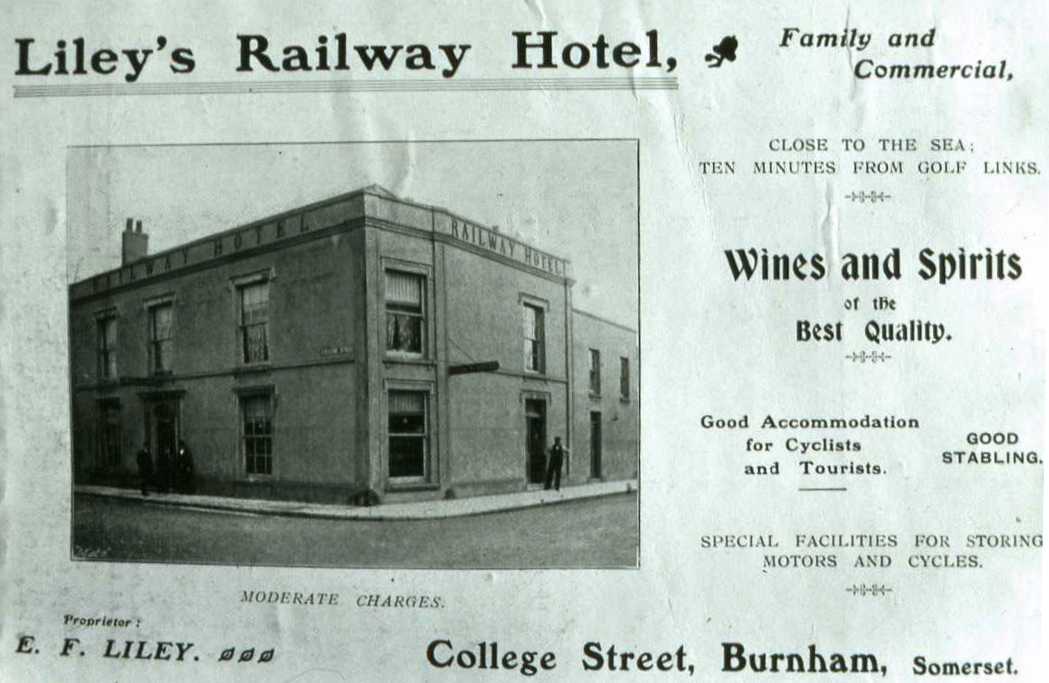 It appears that this work was undertaken during the same period as the creation  of Alfred St. (now High St.).  Alfred House, a private residence later to become a school (which can be seen on the left in the picture at the top of the page, opposite the Railway Hotel) is recorded as having been built not long after the tithe survey.  Around 1910 Wilts & Dorset Bank constructed a new building on the site which later became the Lloyds, Bank we know today. The Railway Hotel itself was built in the mid 19th century and was originally Hallett’s but later became Liley’s, (advert above from Mate’ s Guide 1903). The National School, at the junction of College St and the North Esplanade, was built in 1855. 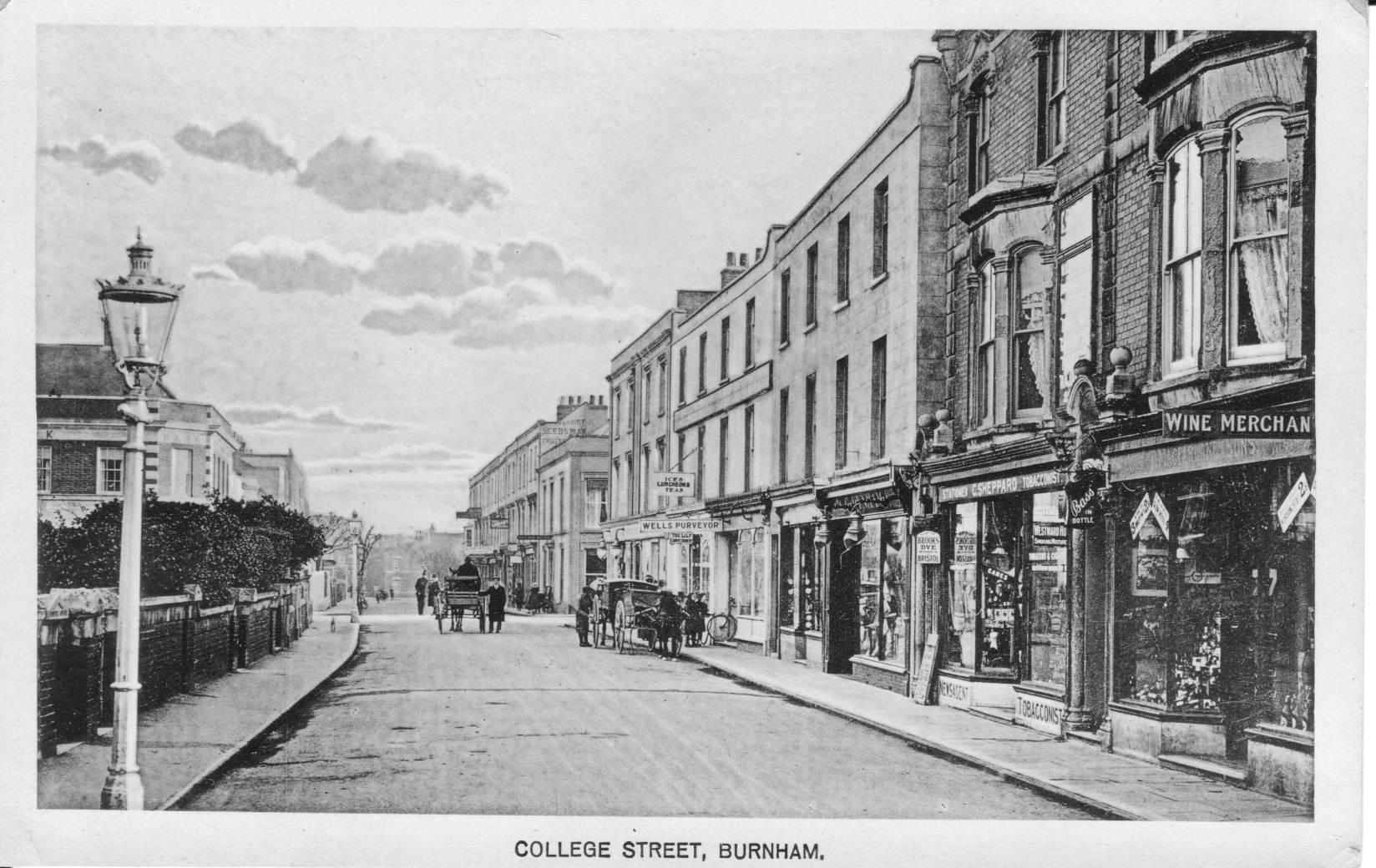 Above is a picture of the west end of the street from after 1910 (bank building can be seen  at left). On the corner with Alfred St (High St) stood Marchent’s (advert below from Mate’s Guide). 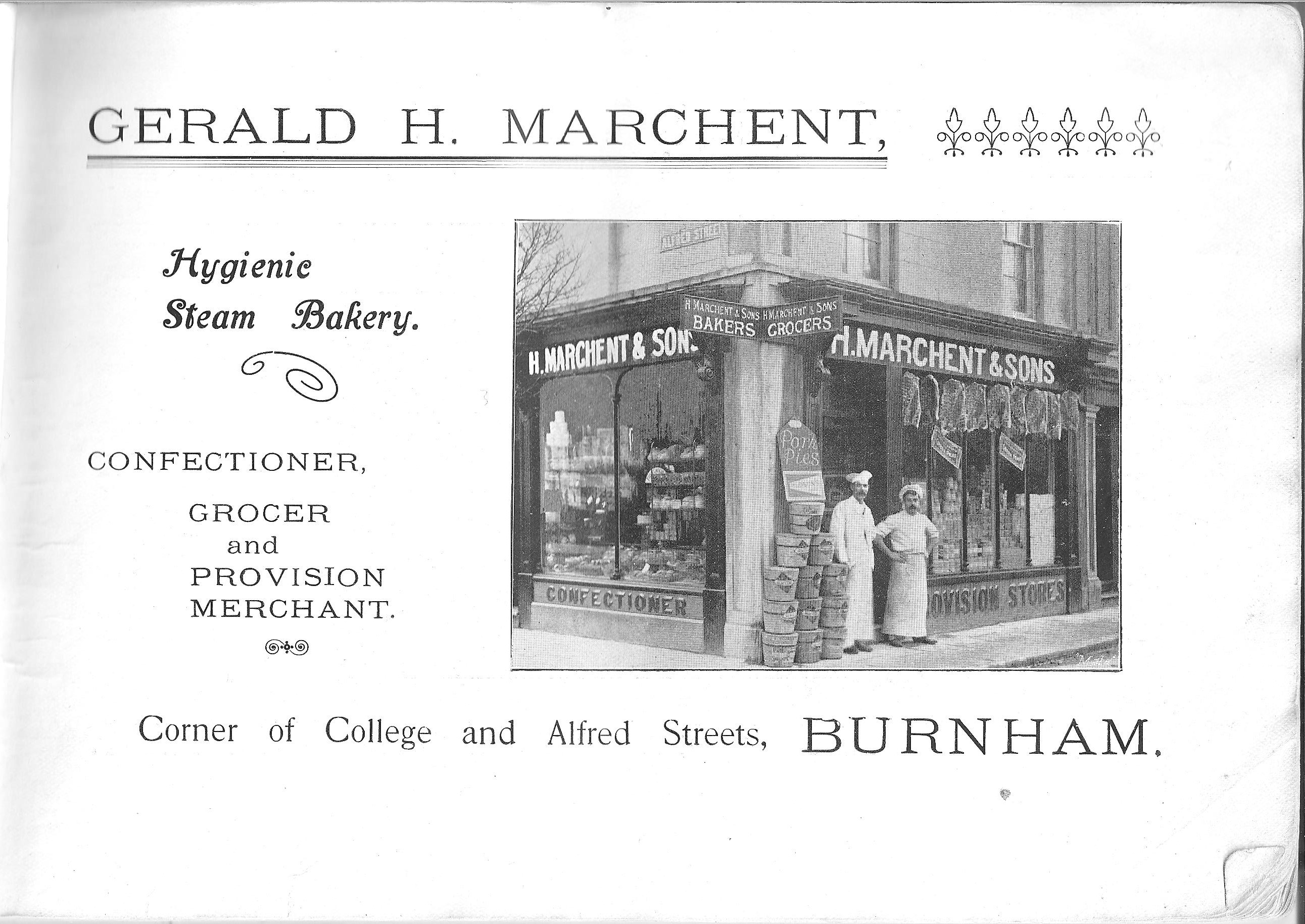 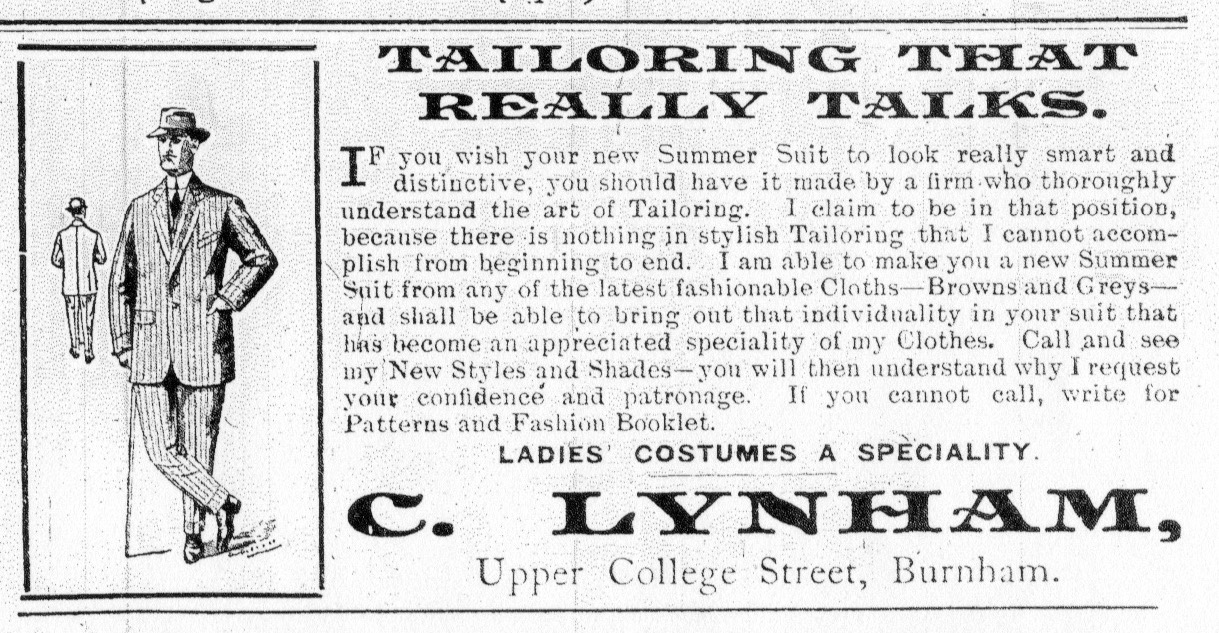 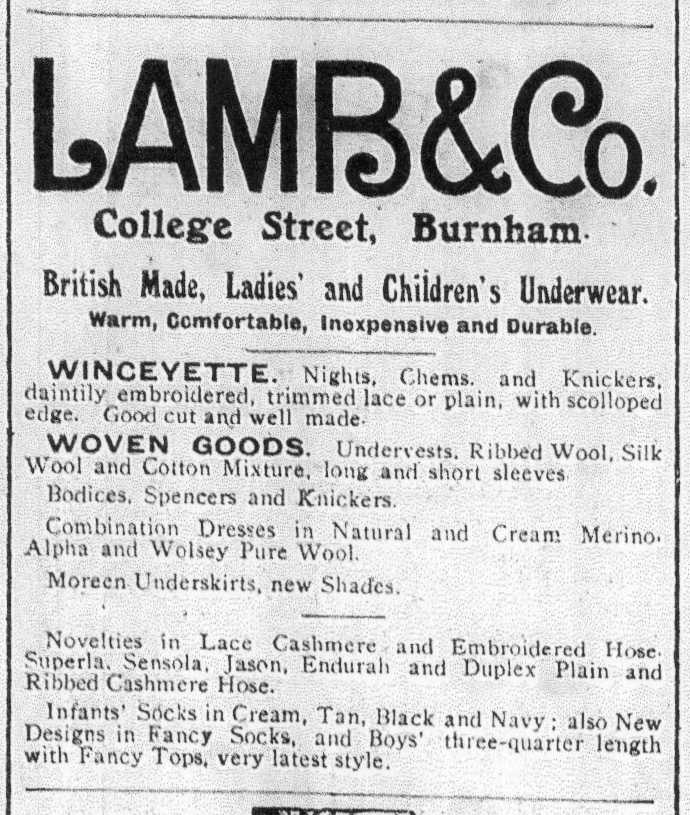 Lynahm’s and Lamb’s stood on the south of the western end of the street at Nos. 7 & 11 respectively (adverts above from Burnham Gazette 1914).

No 5 was occupied by Andrewartha’s Orange Grove Confectionery and Tea Room during the 1930’s. Previously Sheppard’s Stationery (in general view above). 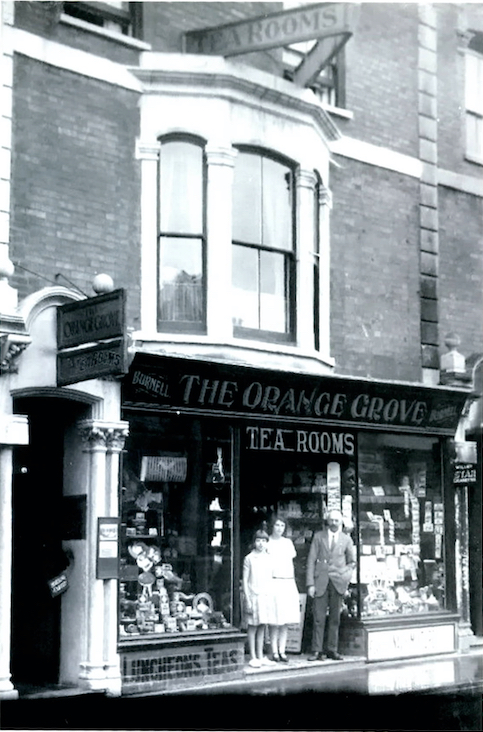 Next door at  No.3 was  occupied by MacFarlanes Wine Merchants, which continued to trade well into the 1960’s. 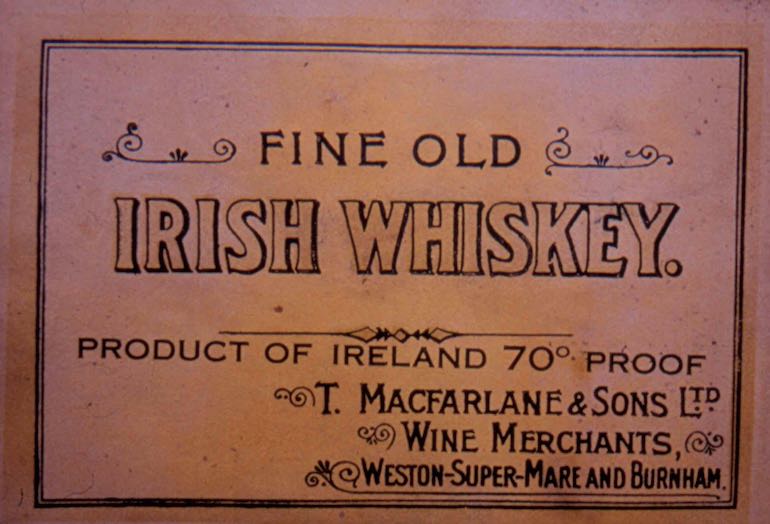 Diagonally opposite the Railway Hotel, on the north corner of the west end of the street, stands the Baptist Chapel. It is shown at below in an engraving as it was before 1902. This engraving shows the Chapel apparently situated very close to the dunes and sea as it was then. How accurate this is we don’t know, only that the National School at the seaward end of the street was later built on what had previously been an area of dunes. In the later photo below we can see the plaque indicating the date of building as 1843. Curiously this is not shown on the engraving. More information here. 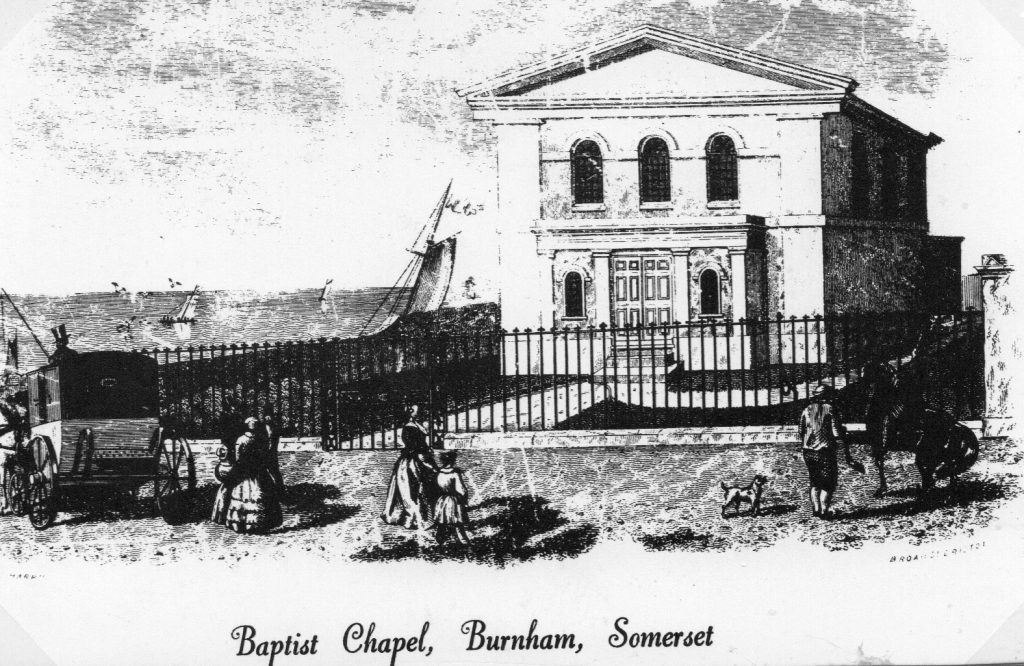 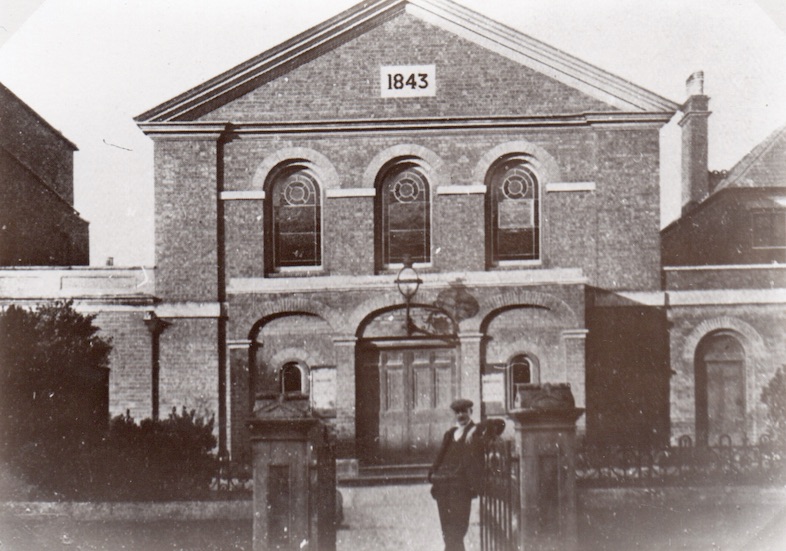 Between the chapel and the National School on the sea front a number of residences were constructed, No’s 2 & 4 were subsequently demolished and replaced by modern shop units.  The sign below is one used by an Estate Agent’s company which once occupied No. 4

Back at the east end of the street, John Bodger’s Seed Merchants occupied the premises next to the Railway Hotel in the late 19th century.

The adverts following show a number of the businesses which have occupied the south side  of the eastern end. 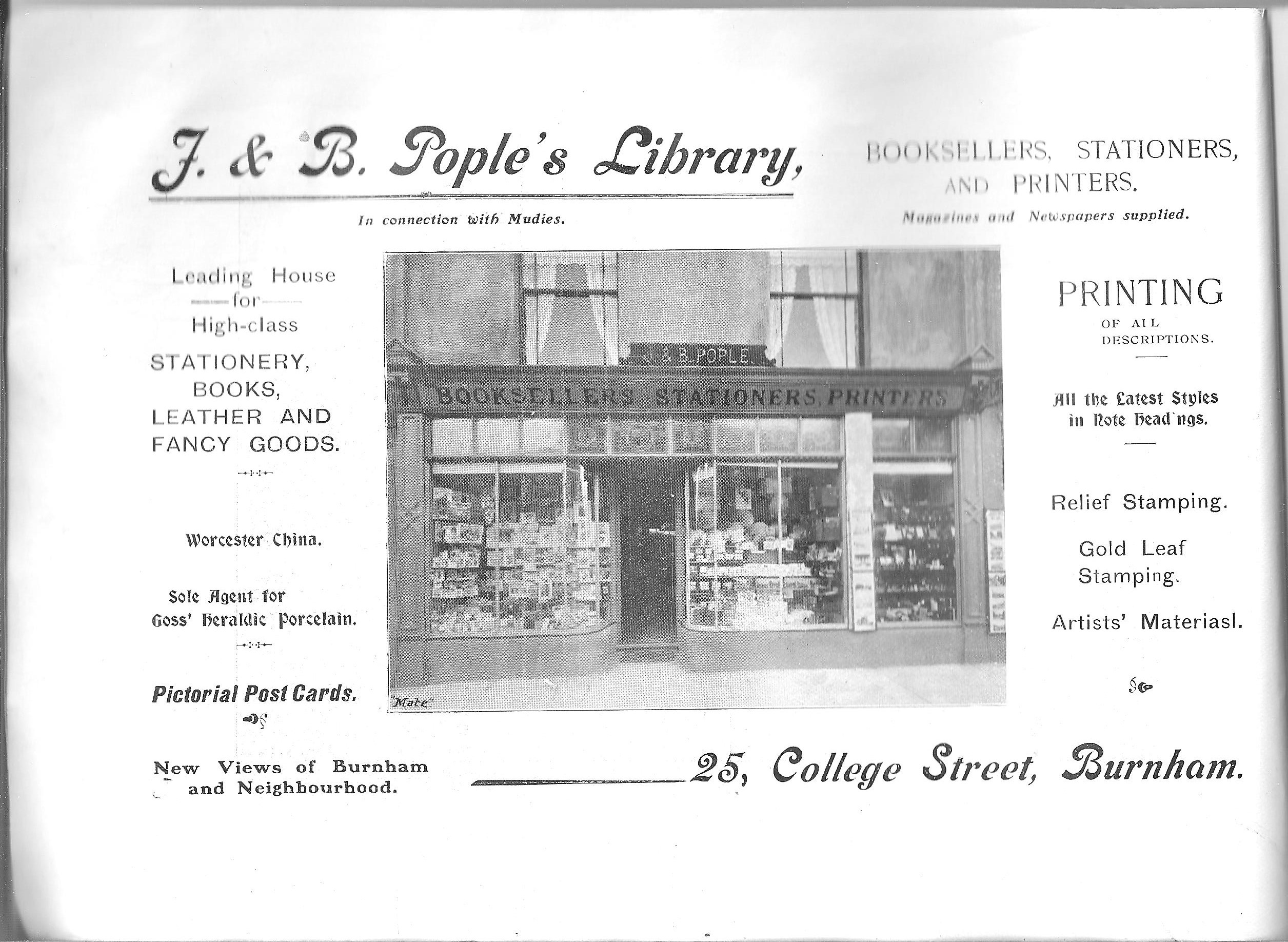 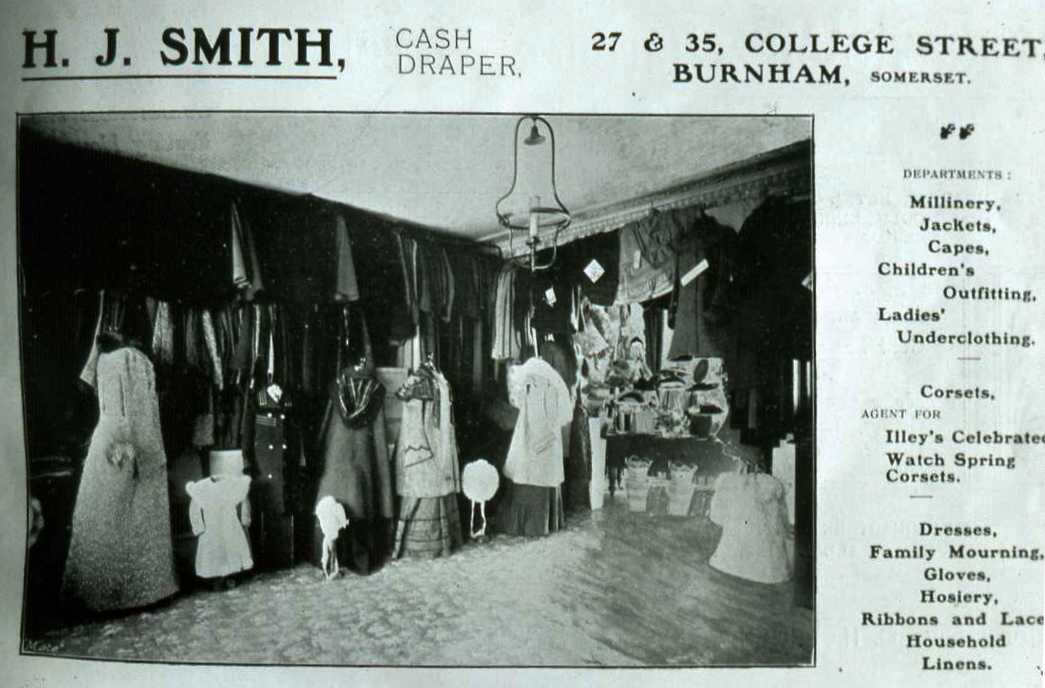 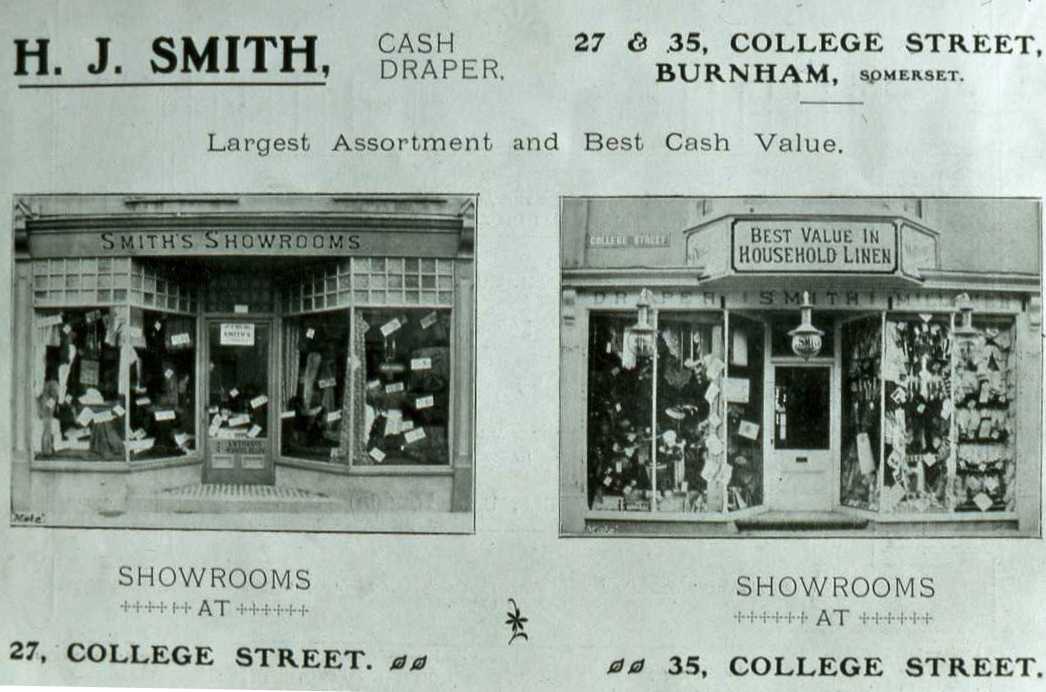 Above from Mate’s Guide, below from Burnham Gazette 1914 showing Warner’s occupying ‘York House Stores’ which housed a number of different merchants over the years. 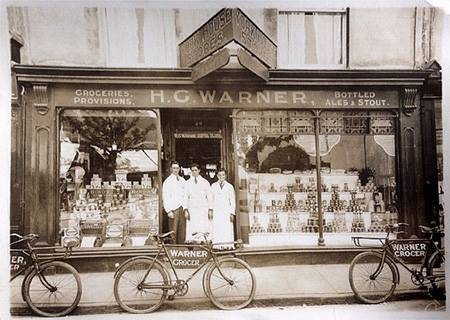 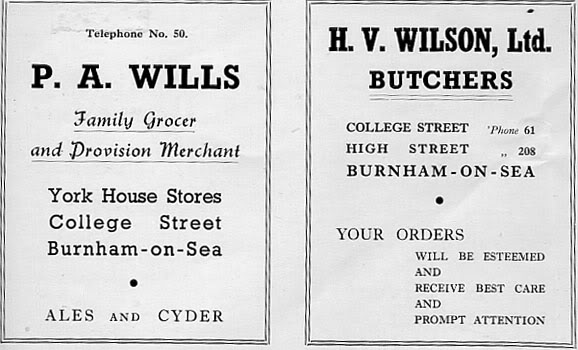 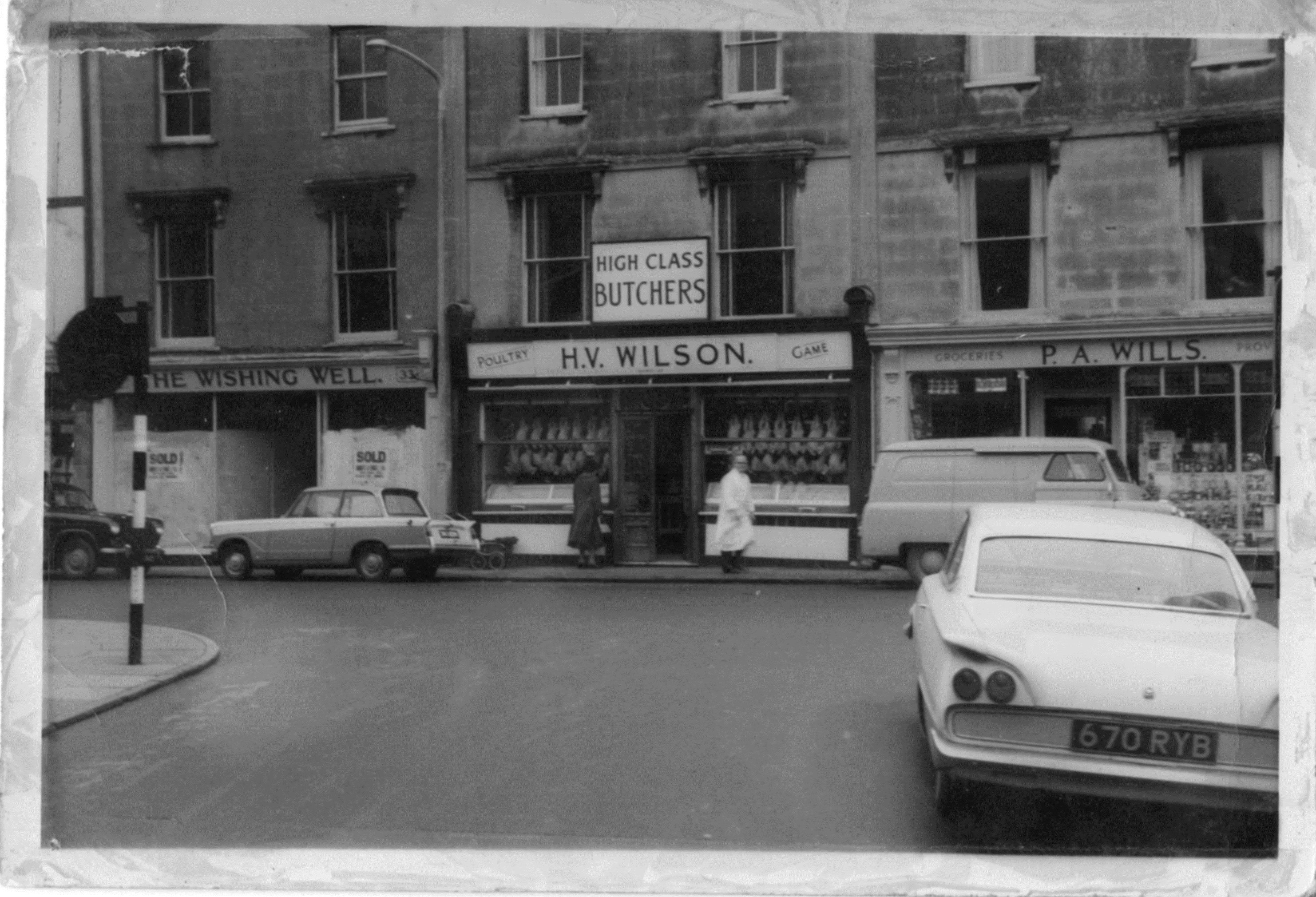 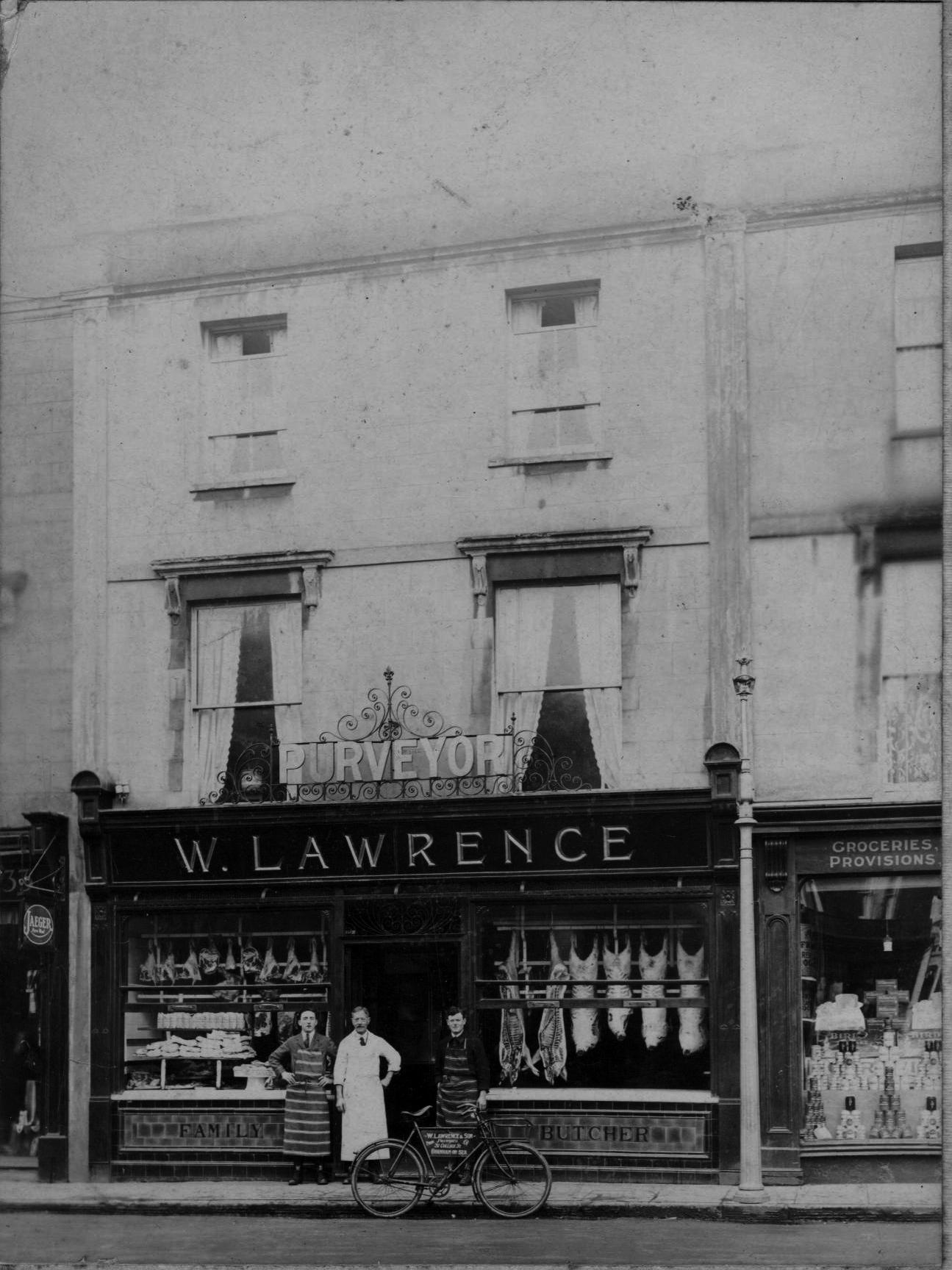 31 College Street, with a shop at its base, was a terraced house of three floors, with outbuilding at the back for storage, stables and a slaughter house. The whole was truly a butcher’s establishment where the animals ‘on the hoof’ became meat to be sold in the shop. There were around 6 men employed with an average wage of £2.10s – 3 or 4 living on the premises reached by the back stairs. No bathroom anywhere in the building. On his £2.10s wage Fred Neath was able to support  his family of four in his terraced house in Adam Street.Out the back was the ‘slaughter house’- a white tiled chamber with chains and pulleys reaching down from the ceiling.

Next door down was No 33 – Mrs Streven’s dress emporium which sold everything to do with clothing and sewing and knitting.

One door up was No 29 was Mrs Warner’s grocer’s shop. Buying half a pound of butter would result in two platters being taken to chop off a chunk of butter from a large slab. Then chopping and patting rhythm which followed – on the scales then off again – bits on and bits off until a perfectly rectangular shape of precisely half a pound was achieved then onto greased paper which was folded up and over and finally sealed for the pricely sum of 6d.

Below Mrs Streven’s shop was ‘tuppeny tube’, a narrow path between the separating her shop from the precincts of the Wesleyan Church.

Children used to play games of cricket against the wall of Hills & Churchills and the printing establishments of ‘Patey’.

Next up from No 29 was the Post Office then Mr Courier’s Ironmongery shop. The back of this shop came out at the end of the back cul de sac where he had a large workshop in which he made bird scarers which he sold and sent all over the country.

The Butcher’s referred to in this recollection  probably Lawrence’s.

Listen here to Joan Tindall, Grace Dobson and Sheila Brooks recalling the butcher’s in College St. Johnson’s pre-dated Wilson’s at No. 31, being there in the 1930’s:

Thomas’ Cox’s occupied premises in this section of the street, possibly No.27, prior to their move to larger premises in Victoria St. 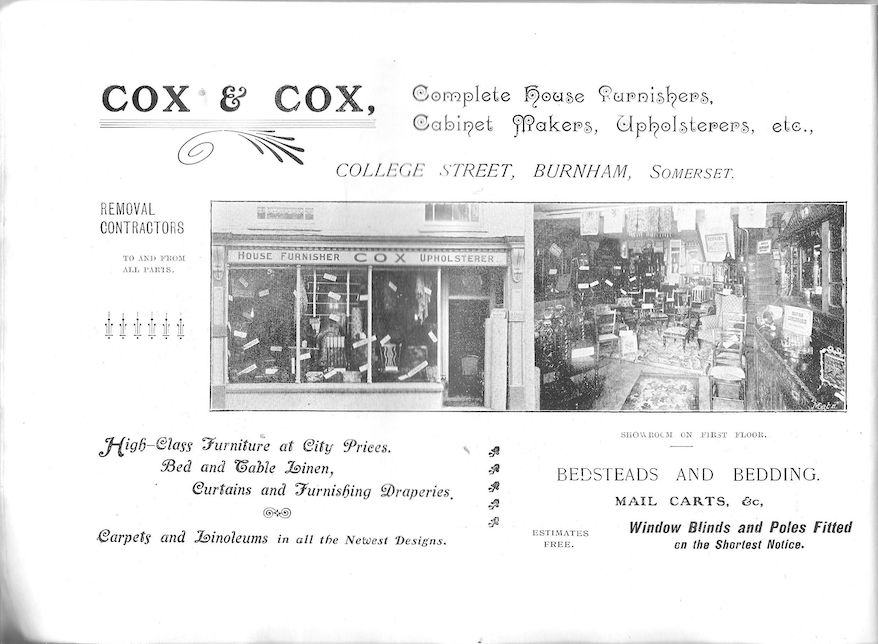 The Methodist Church was opened in 1879. Cuthbert Ritson had been involved in the provision of the land and presided over the opening public meeting. 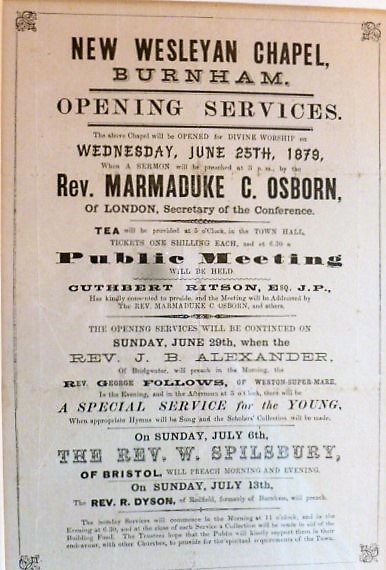 Tickles Garage was situated at No. 16 from the 1920’s, currently BetFred, and ran right through to Lower Chapel St, occupying the space now taken up by Take 2 Coffee Shop. The advert below is from the 1967 Burnham Guide. The garage was eventually replaced by Alder King Estate Agents. 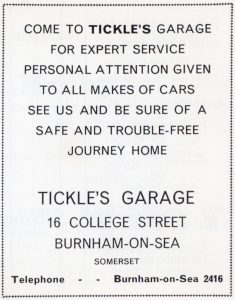