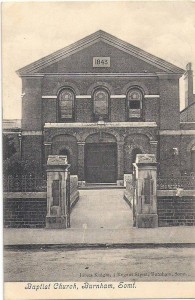 As can be seen from the plaque above the entrance it was built in 1843 and one of the first churches in the fast developing town, during the Victorian era.

It first opened its doors for worship on 12th August 1843 . Prior to this meetings had taken place in private houses of non-conformists in the town, after 1831 in the house of Josiah Sealey.

William Cross, a Bristol Merchant, came regularly to holiday in Burnham with his family  and thought it a shame that there was no regular meeting place for the Baptists. In 1842 he purchased  a plot of land by the sand dunes for £25 in order that a Baptist Chapel could be built. William Cross attended the opening ceremony and the first service was led by his son the Rev. W.J. cross, among other ministers. A permanent minister was soon found and  the chapel thrived, with a large Sunday school. Mr Cross continued to fund the chapel until his death in 1878.

Baptisms took place in the sea until a well was dug and the baptistry built in 1874. Records show that in 1875 three members volunteered to subscribe 9/6d towards purchasing a bathing dress for the pastor; presumably for the baptisms.

The tithe map of 1843 shows that the church was completely surrounded by open ground but by 1852 a further map shows that it had already been enclosed by rapid development of new buildings.

Elnathan House, next door, was purchased in 1883 to be used as a minister’s residence. This was demolished in 1980 in order to build the church halls.

Based on research by Pat Nicholls 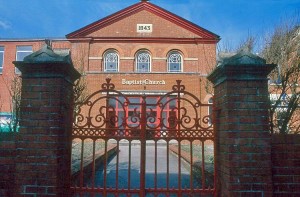 Discover the next location on the trail: 27. Commercial Inn