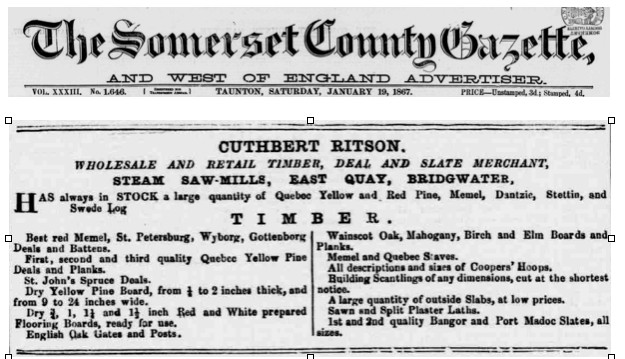 Cuthbert Ritson was a Highbridge Timber Merchant who took up residence in Ravensworth House in Burnham during the latter half of the 19th century and became a major influence in the civic life of the town.

Cuthbert was born around 1820 in County Durham, the third child of William and Elizabeth Ritson. (1841 census). The census appears to give his father’s occupation as ‘farmer’  but is a little hard to interpret. There may be a number of strands of the Ritson family in County Durham but it is interesting to speculate what Cuthbert’s relationship may have been to Joseph Ritson (1752-1803), English Antiquary and compiler of the Robin Hood Legend.(https://en.wikipedia.org/wiki/Joseph_Ritson)

The 1851 census shows Cuthbert as living as a householder with a growing family in Bridgwater and list his occupation as a timber merchant employing 100 men and 23 boys. At age 31 he was already a substantial businessman.  Auction records show that by 1865, at age 48,  he was running a timber importing business at Highbridge Wharf and that this business continued through the 1870’s. 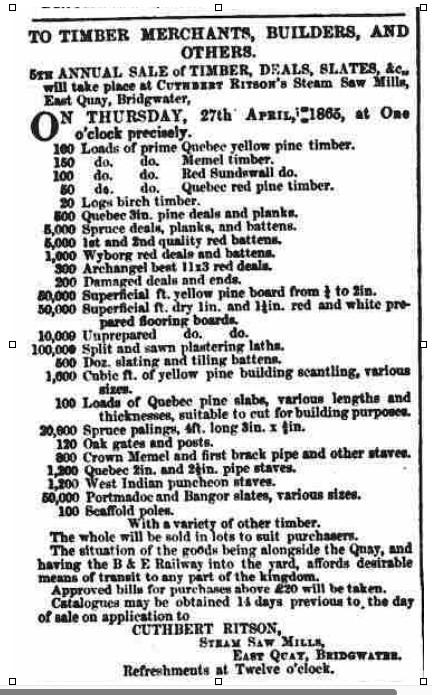 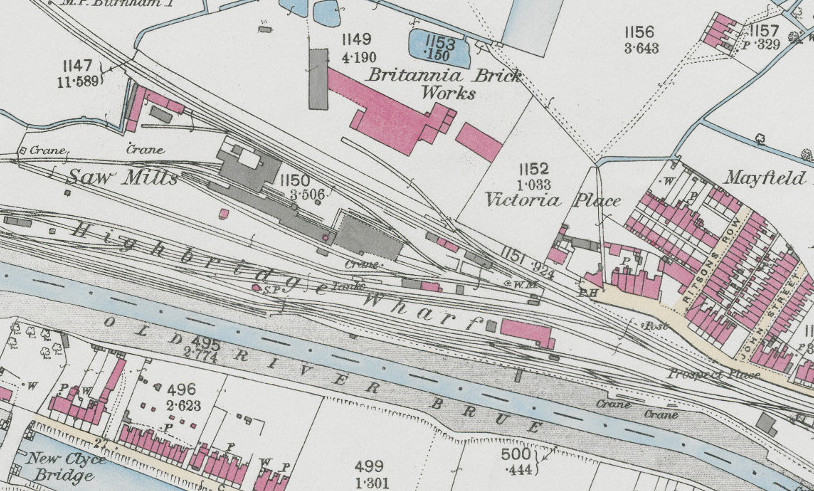 Cuthbert is shown in the Freemasons Rural Philanthropic Lodge Register of 1866  for Highbridge, with a joining date of May 25th that year. This indicates his rising status.

The Western Gazette and Flying Post of July 9th 1869 reported on the opening of the Burnham Town Hall and Market House (now the Princess Hall). It lists C.Ritson as one of the Directors.

The 1871 census shows the Ritson family as  resident at Ravensworth House in Burnham, of which Cuthbert was now owner.  Cuthbert Snr. was by now 54 years old. The family is listed as: Wife Elizabeth; sons William (22), Cuthbert Jnr & John (both 21), Frederick (11); daughters Ellen (15), Margaretta (13) and Alice (9). A live in cook and housemaid are also mentioned. A separate section of the census refers to the area of land on which Ravensworth House then stood as ‘Ritson’s Corner’.

The census of the same year also mentions an address by the name of ‘Ritson’s Buildings’ in Newtown, Highbridge, suggesting that Cuthbert owned this property (see ‘Ritson’s Row’ on map above).

John Ritson is noted in the records of the just re-formed Burnham Cricket Club as captain for 1871. The club record for the year, as researched by Herbert Howell, mentions Cuthbert Snr as the largest patron: 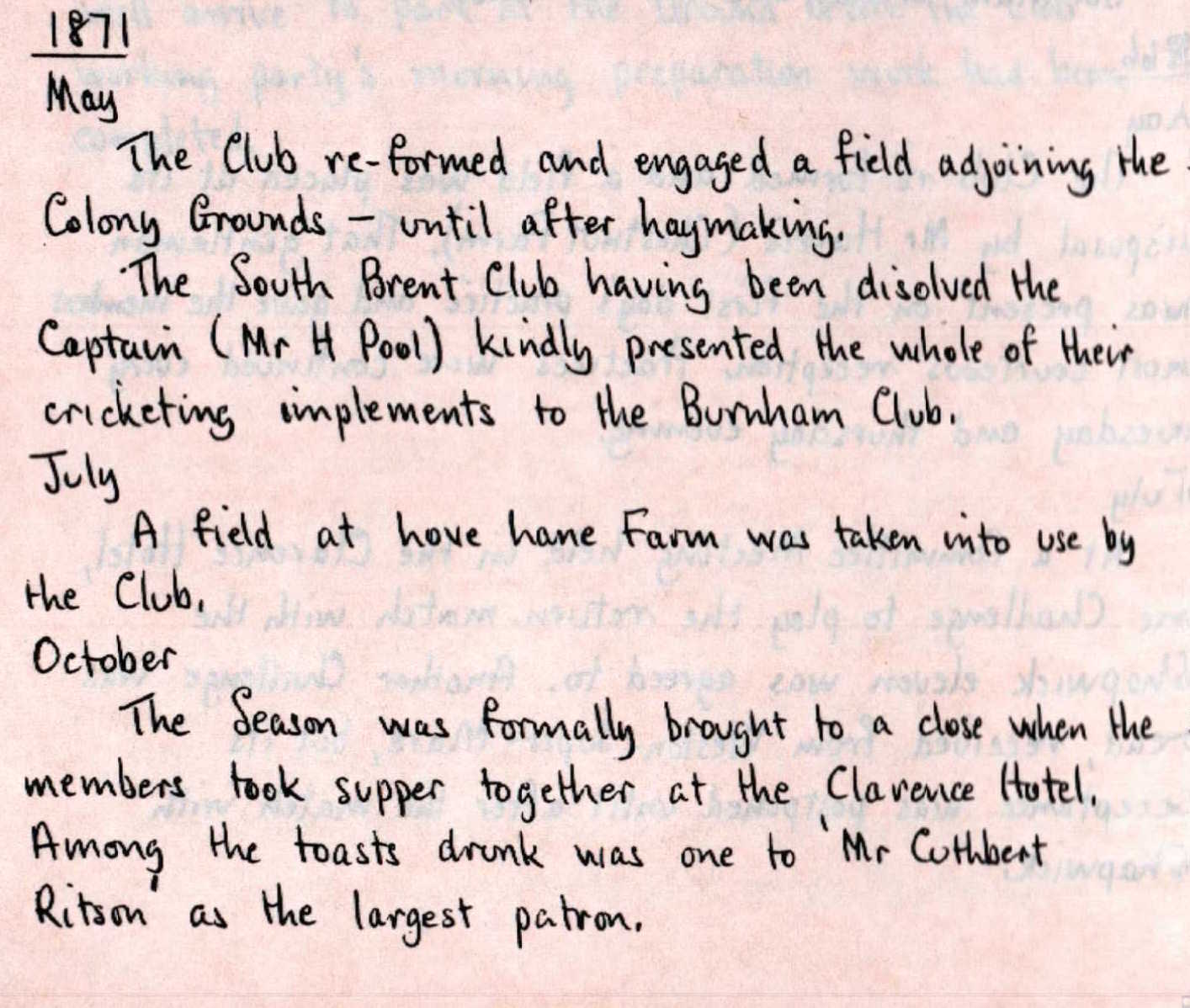 The Bridgwater Mercury of 7th June reported on the team’s first match: “a very pretty game throughout”, and mentions that it was a close run game with only 2 runs between the sides. It goes on to say: “The match ‘Married v. Singles’ is to be played in the new field as soon as the hay has been made.”

The Fourth A.G.M. of the Burnham Literary Institute was reported in the Western Gazette of 17th January 1873 where Cuthbert Ritson is mentioned as a member of the committee. He is also mentioned as taking part in an entertainment in aid of the Literary Society at the Town Hall in December 1874, during which readings, recitations and songs were given (though what he contributed is not specified).

On January 10th 1873 The Western Gazette reported that “The Lifeboat Committee held their annual meeting on Saturday at the residence of Mr Cuthbert Ritson, the hon. secretary of the Burnham branch of the National Lifeboat Institution.” It went on to  say “Mr Ritson stated that at a committee meeting held on the 2nd November, a resolution was agreed to, affirming that the present position of the boat [Cheltenham] was a most inconvenient one for launching in an emergency, at certain states of the tide, and it was highly desirable to change it. Suitable sites near the pier and the railway station were mentioned as likely to be procured.”

Below is a letter of invitation   to a committee meeting  in 1875, hand written by Ritson: 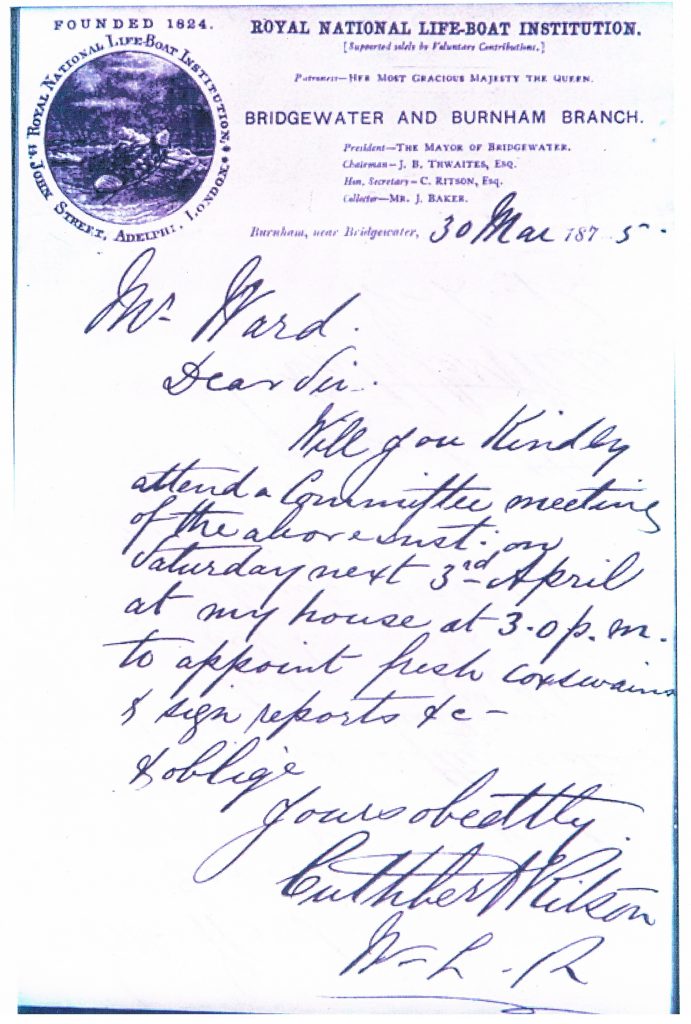 It seems that between 1874 and 1876 there was an ongoing dispute between Cuthbert and the Board of Health over his alleged ‘encroachment’ on the highway by erection of a fence on the Highbridge Rd. This revolved around the question of how much space at the side of the road should come under the auspices of the Board. It appears that the fence did not technically encroach upon the road as it was more than 15 feet from the centre, however some board members felt that it encroached on an area for which they were still responsible.  It appears that in 1874 the Board found for an encroachment and ordered Ritson to re-instate. However this had clearly still not been done by 1876, at which point some members of the Board seemed disinclined to follow it up and the matter was dropped.

The issue seemed to have originated with Ritson making good a ditch. The Bridgwater mercury of 16th Aug 1876 reported:

“Mr WOODMAN said  Mr Ritson had given up some road near the Brewery, and he thought they should adopt the ‘give and take’ system. -The CHAIRMAN said a dangerous ditch had been filled in by Mr Ritson, and that they must all acknowledge that he had effected a great improvement. He had not really narrowed the road, but merely filled and railed in the ditch. – Mr KING said he believed that if Mr Ritson sat there as a member of the Board he would allow no such encroachment himself, and he (Mr King) thought that if it was represented to him by their surveyor that it was an encroachment he would put it back without any further trouble. – Reference was made to former minutes respecting this matter, and it was stated that upon one occasion Mr Ritson had intimated that if required to put back the fencing he would cause the ditch to be thrown out again. – The CHAIRMAN said that though Mr Ritson had gained a little bit of ground it was not a quarter enough to compensate him for the outlay he had made.”

It is not clear when this ‘ongoing dispute’ started, though there is a report in the Western Gazette as early as September 1866 of Mr Ritson having deviated from a plan agreed with the Local Board with regard to positioning of a wall, in this instance he was supported by George Reed who “contended that they could not compel Mr Ritson  to build further back, and maintained that a wall was not a building within the meaning of the Act.”

The report below indicates that by 1878 Ritson was now both a J.P. and  Chairman of the Local Board of Health. Other reports show that he was also a leading member of the Burnham Friendly Society. 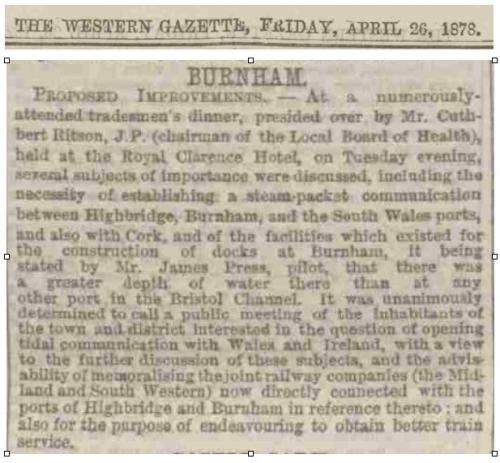 The following year this report appeared in the Taunton Courier: 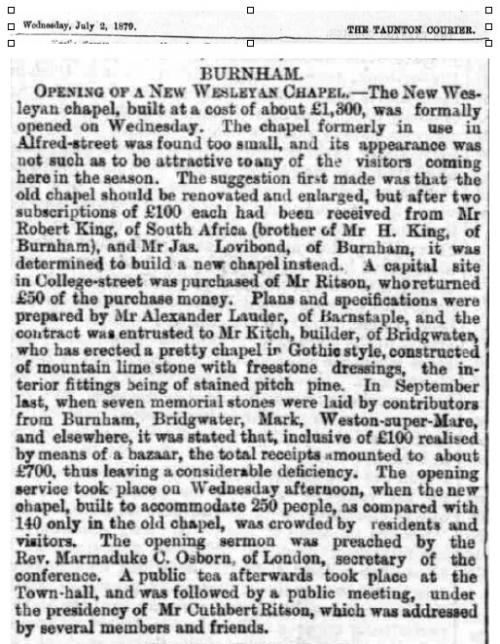 This seems to indicate that Ritson owned the land in College St opposite the entrance to the grounds of Ravensworth House. An obituary for his eldest son William in January 1879 indicates the family still resident at Ravensworth House.

The article below from 3rd May 1876, reporting on Local Board business, refers to Ritson’s interest in ‘Barley Penn’. This is shown on the 1843 tithe map to constitute the whole of the south side of what was later to become east College St, that is the land upon which the Railway Hotel and the Methodist Church were eventually built. One wonders whether the footpath here referred to is the one which still exists at the side of the Methodist Church. 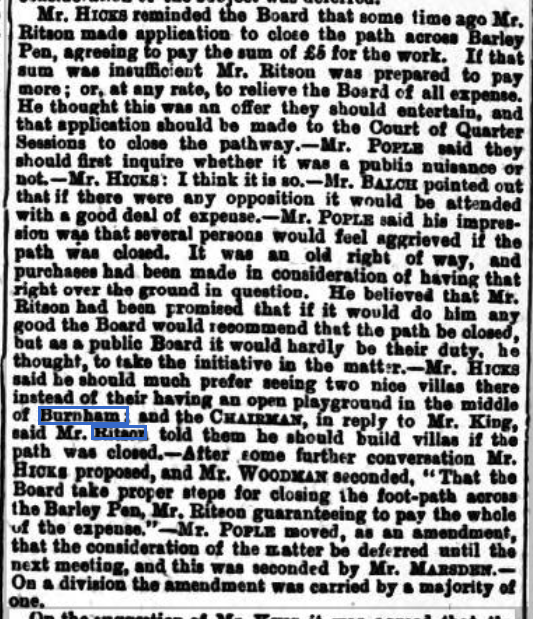 On July 30th 1879  the Taunton Courier reported on a special meeting of the County Commissioners of Sewers to consider concerns about the dangerous condition of the sea wall at Pillsmouth near the Parrett and Brue confluence. It reported “Mr Cuthbert Ritson (chairman of the Burnham Local Board of Health) urged the importance of adopting greater precautions than at present to prevent the threatened inundation of miles of country extending inland as far as Glastonbury, and asserted that if this was not done soon a much larger deputation would wait upon the commissioners on the subject.”  Later in the report it was noted that there were fears  that groins provided to help, by diverting the current from the northern bank, would interfere with navigation. In response to this “Mr Ritson, timber merchant, said his vessels would be more affected than any others, and for his own part he thought such apprehensions were groundless.”

In January 1880 it was reported in the Western Gazette that at the Railway Hotel, Highbridge, Cuthbert Ritson had been presented with a gold ring “as a small token of the respect and esteem in which he is held by the merchants, traders and other residents in Highbridge.”

However in September the same year The Western Gazette reported a dispute between Cuthbert, as Chair of the Local health Board, and other committee members: 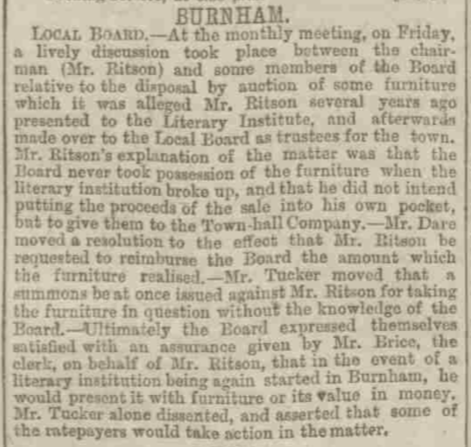 In June 1881 the same newspaper reported that Cuthbert had sent a letter of resignation to the clerk of the Board stating that “he knows his presence there is unacceptable to a majority of the members, and he does not feel able, therefore, to discharge his duties to the ratepayers so satisfactorily as he could desire.”

The Taunton Courier reported in July 1881 that Cuthbert Ritson J.P., now referred to as chairman of the Highbridge market Company, was one of a number of local tradespeople holding discussions about the possibility of reviving steamer services between Cardiff and Burnham.

Ravensworth House was advertised for sale or lease in 1880 and the April 1881 census shows Cuthbert at 64 as  a “timber and coal merchant”  now living  as a “lodger” and sole occupant of a property  in Turnpike Rd (now A38), in the parish of Huntspill. The census information about enumeration district and neighbouring properties seems to put his address close to the very centre of Highbridge and near to the cattle market. Despite his apparently still substantial status, he was a lodger and his neighbours are listed with relatively lowly occupations. Therefore it may be that this was temporary accommodation. His children would by now have been all old enough to have left home. His wife may either have been deceased or absent.

It appears that by 1881 John Bland & Co, timber millers from Cardiff, had taken over Ritson’s business (see https://capturehighbridge.wordpress.com/industry/john-bland-co/)

The commemorative plaque in Jubilee Gardens, Highbridge shows that in his later years Ritson was still actively  involved with cicvic business. 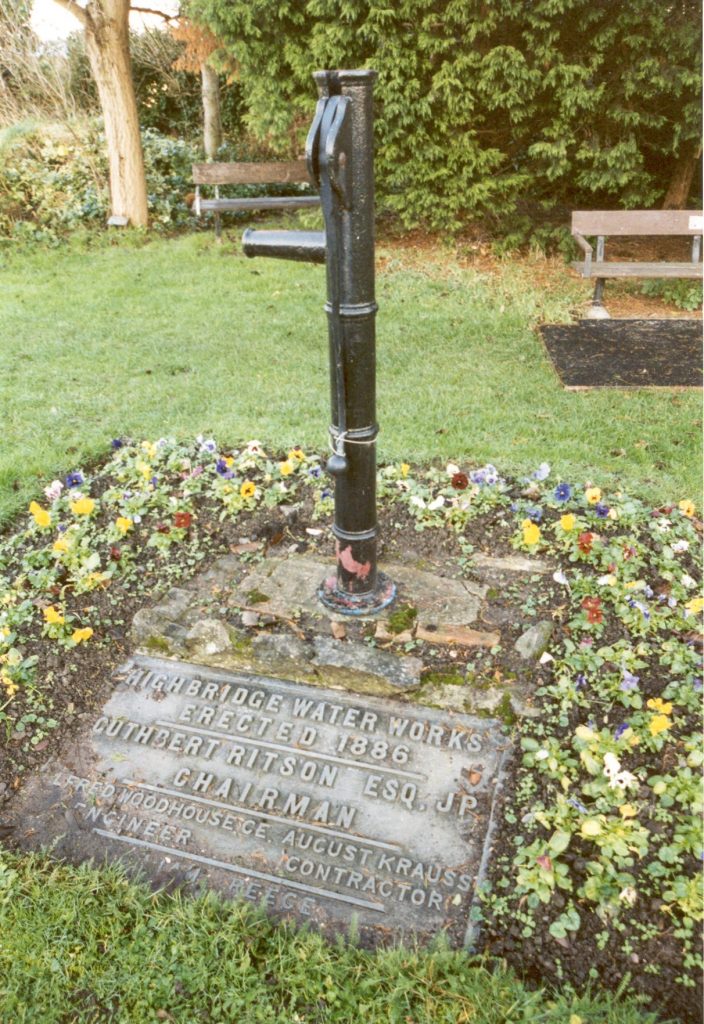 The Probate Register for 1889 records Cuthbert Ritson’s death as being on 18th June 1888 at Highbridge.