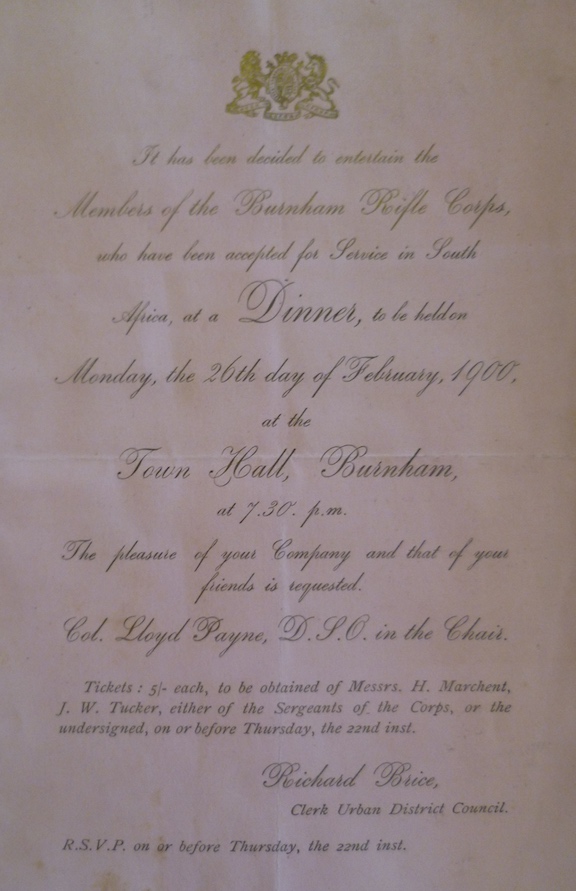 Below left, a letter from the front by a member of the Patey printing family, printed in the local press, and right a list of local charitable subscriptions to the war effort. 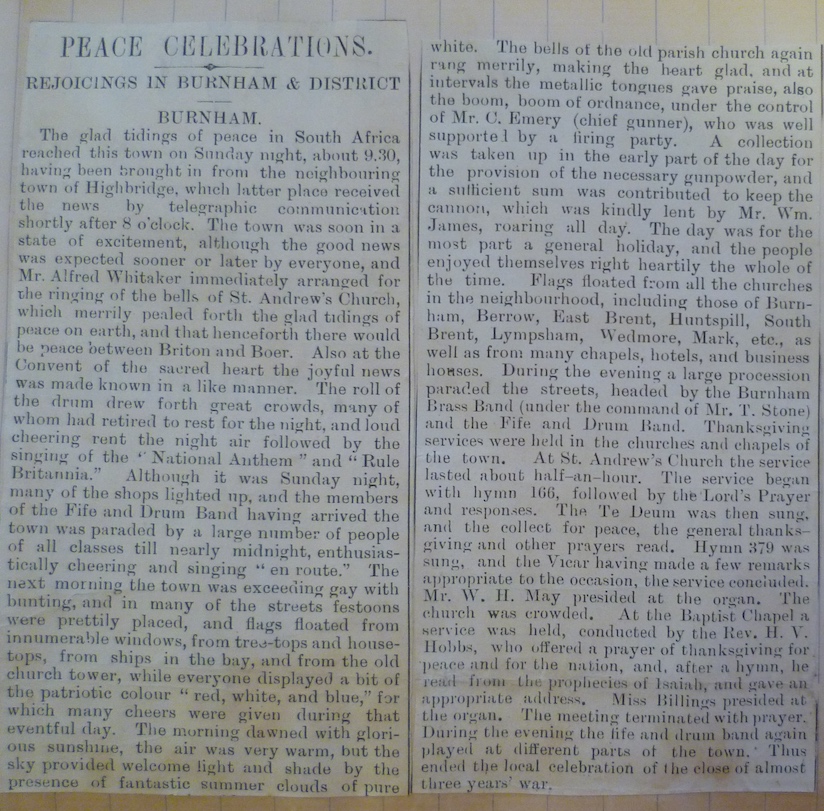 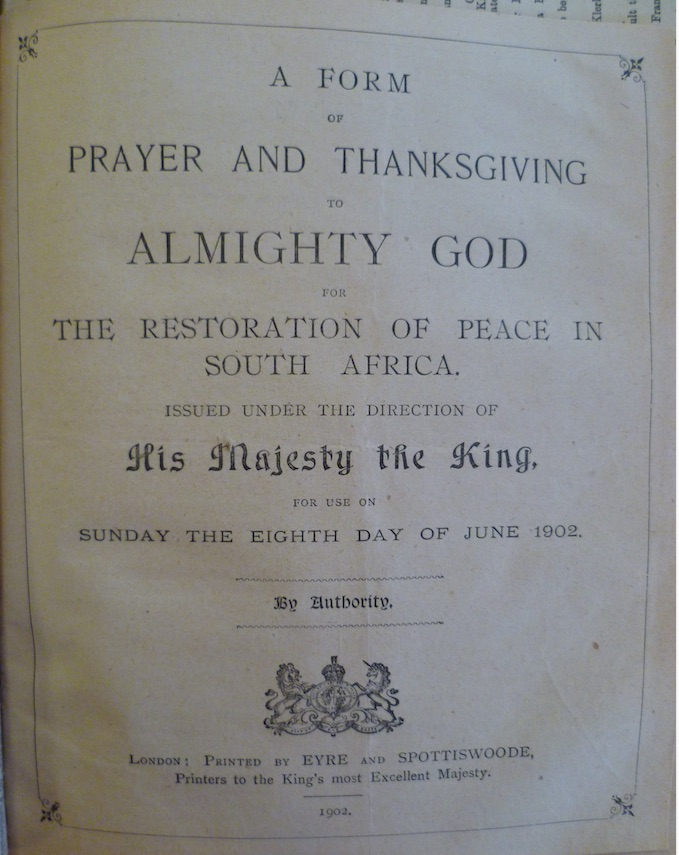 A ‘snapshot’ of Burnham during the first week of the first world war: 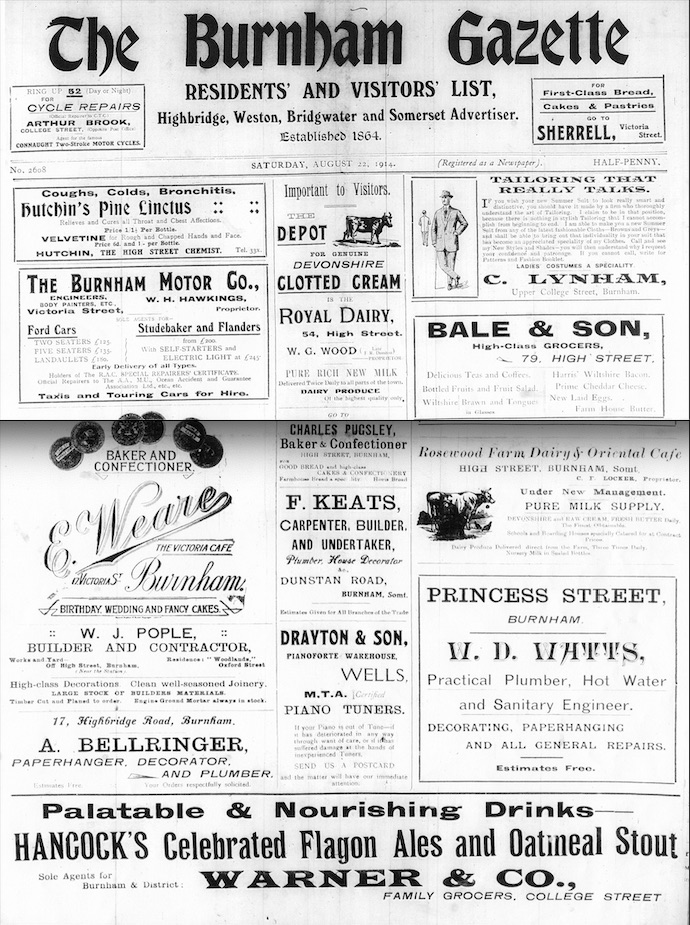 The certificate below shows a charitable gesture by one of the students of St Margaret’s school, at that time situated in Julia Terrace, in donating prize money to the War Fund.

Shortly after the war St Margaret’s moved to the house in Poplar Rd which had been used as a military hospital during wartime (below). Hart House School was also used for this purpose. 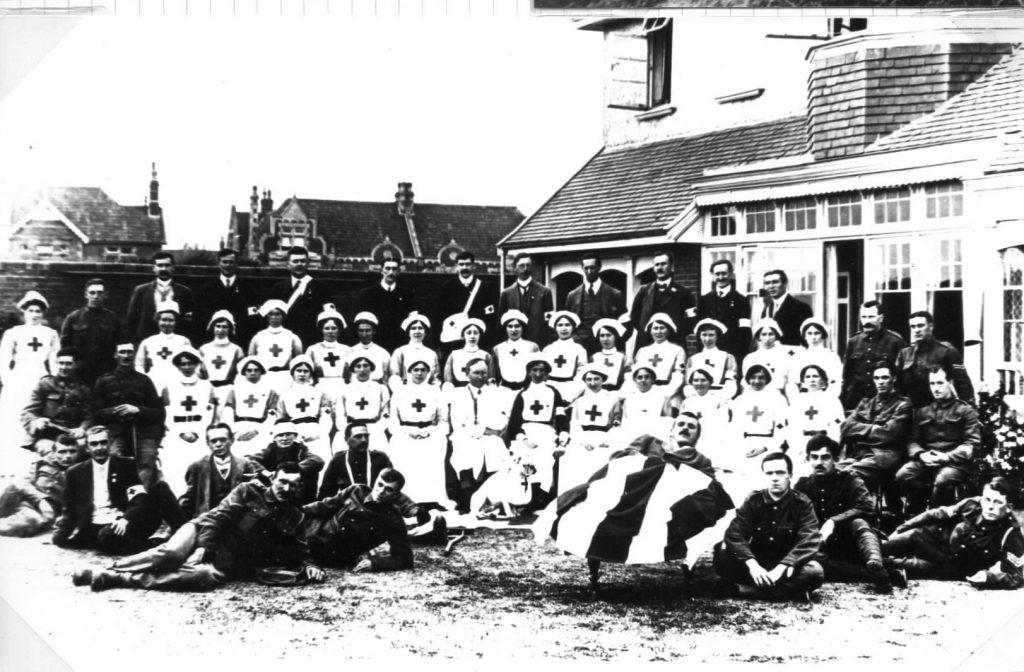 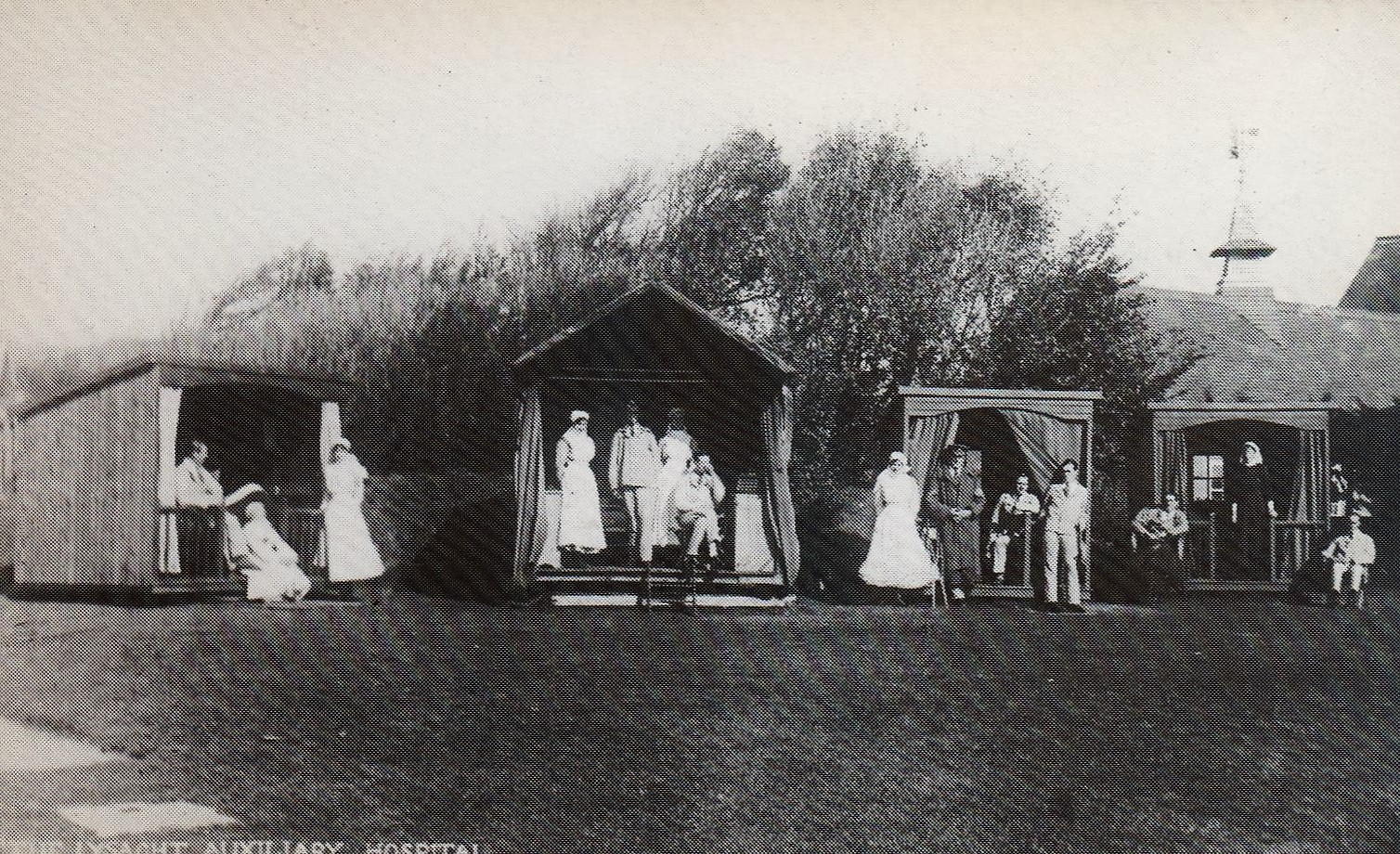 The Burnham Gazette and Highbridge Express Centenary Edition of 1964 tells us that a company was formed in Burnham to make aircraft wings during the war, in co-operation with other firms in the district. It gives no more information so if anyone can supply more please send us a comment below. 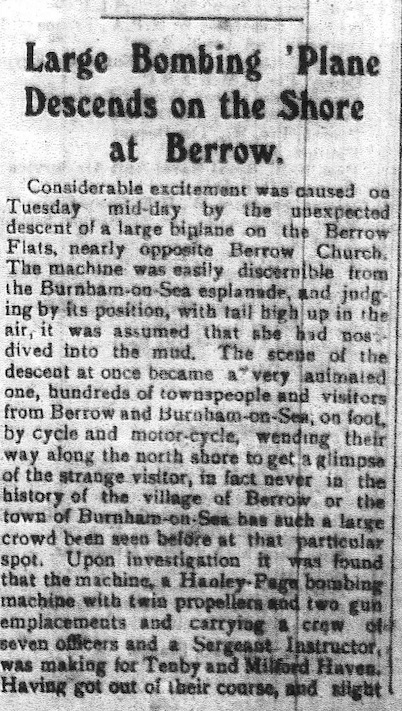 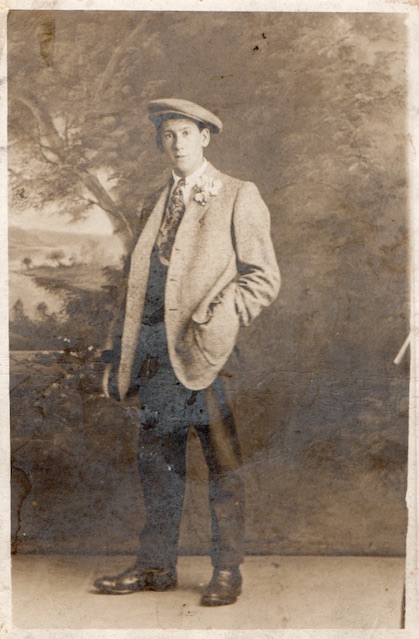 Charles Sealey of Abingdon St  is just one of those Burnham residents who gave their lives. Another was Albert Dyer (below). For a full list and details see  World War I casualties page.

An account in The Burnham Gazette and Highbridge Express Centenary Edition of 1964 tells us:

“The second world war found Burnham on the route of the German bombers from Germany to South Wales and many raids were observe from the Burnham Esplanade. One raid with fatal consequences [not specified]. Propaganda leaflets were dropped on the sandhills by the Germans, many of which are still preserved. The raiders presumably thought that they were over some large city such as Bristol or Cardiff. Considerable defence measures were taken including the construction of pill-box forts and wire entanglements but fortunately they were not used.”

Burnham was home to one of the 19 Observer Corps teams which formed part of the No 22 group (H.Q. at Yeovil)

Below are a number of stills from the film by Norman Gobey showing the Local Defence Volunteers.

The first civilian casualties of air strikes in Somerset were at Burnham on 18th June 1940 when 2 people were killed, 3 injured and damage caused to 70 houses. On 14th August 2 Heinkels were shot down over Sedgemoor, one coming down in the mouth of the River Parrett from where the body of a gunner was recovered on 12th September.  (Info from Somerset at War 1939-45 by Mac Hawkins)

The building at the rear of the Adult School in Adam St, seen below in a photo by Glyn Luxon, was at one time part of the Civil Defence network. 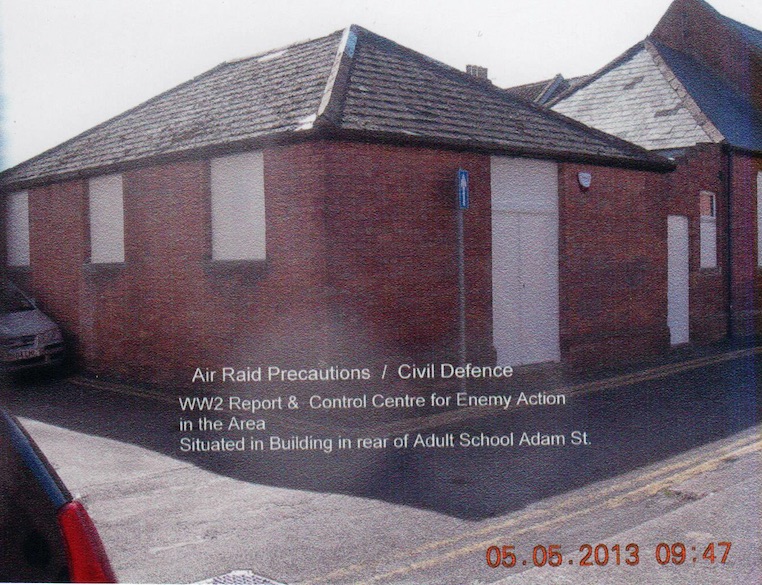 On 7th September 1939, the National Registration Act was passed, introducing identity cards for everyone, including children. The card was stamped by the local registration office. Thanks to Brian Marchent for providing the example below which was issued in 1944, presumably shortly after his birth. 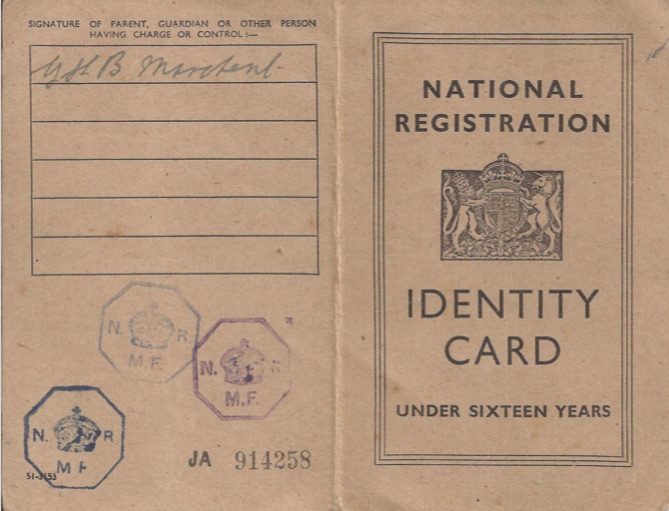 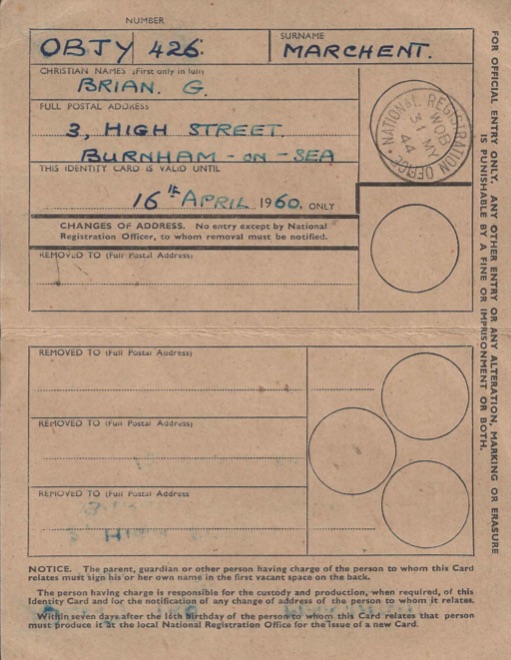 EVACUATION OF CHILDREN & ACCOMMODATION OF REFUGEES

The certificate below (image supplied by A. Young) appears to be a certificate of thanks to a local resident for accommodating evacuees or refugees. 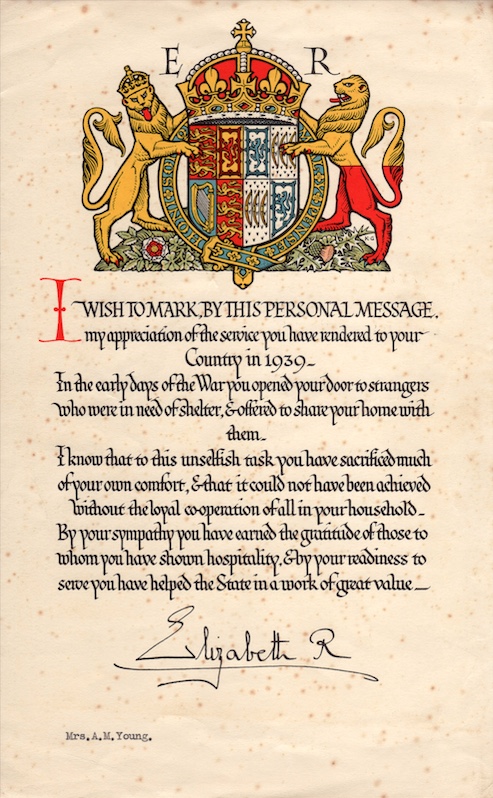 The above article was supplied by Des Parsons. Des recalled having it when purchasing a card for the 100th birthday (in 2020) of Patrick Stokes, the son of the gentleman in the article. Patrick Stokes had been  Des’s first boss at Wallbutton’s Garage.

The postcard below shows the poles driven into the beach to prevent enemy aircraft using it as a landing strip. 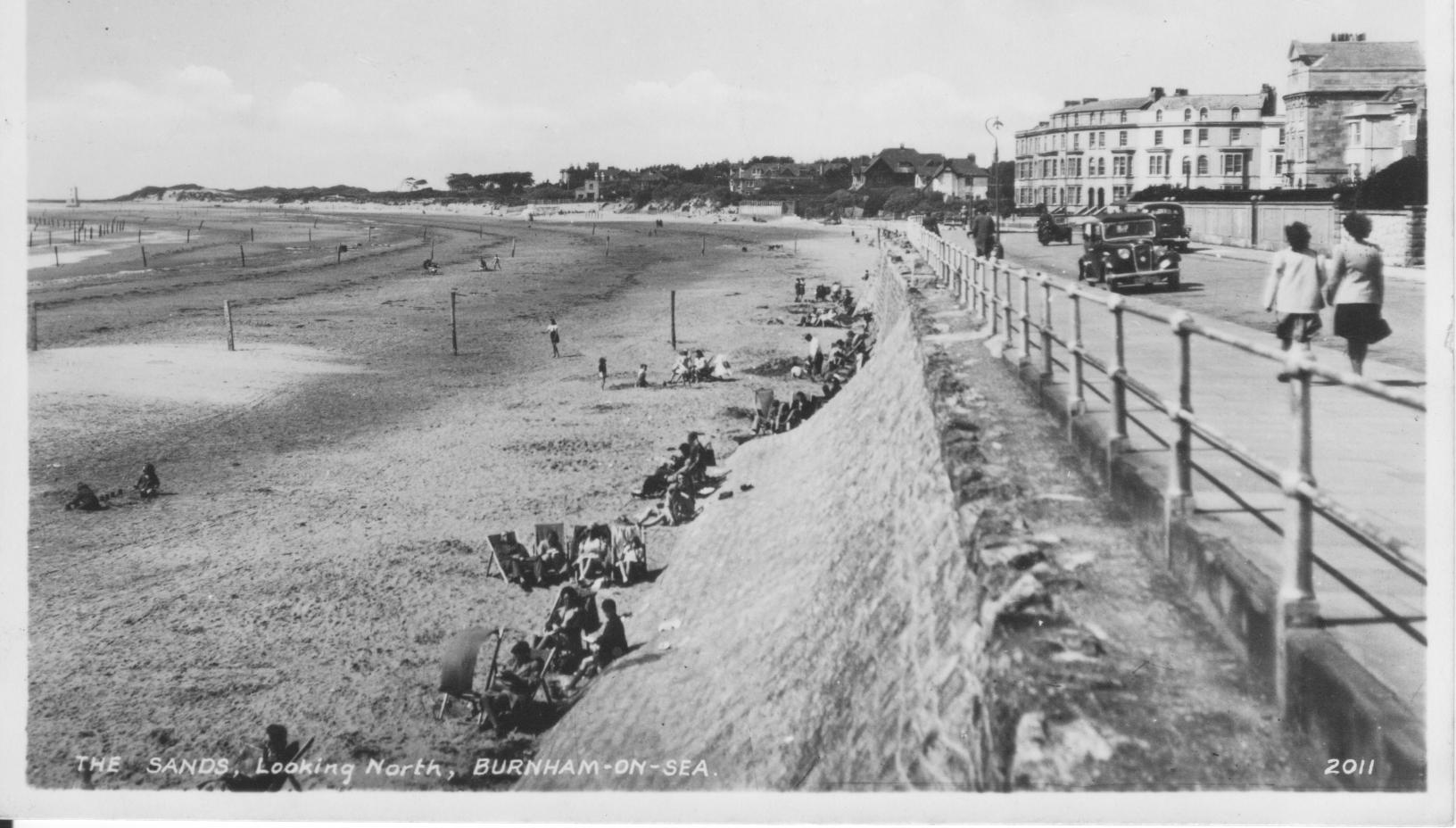 Between 1943 & 1945 members of the U.S. Army Transportation Corps 202,  780th Railway Company, were billeted at Naish House and worked at Highbridge Wharf.

We have received information about railway facilities for the storage of Petrol, Oil and Lubricants which the US Army created on and adjacent to the Somerset & Dorset Railway at Highbridge. Alan Hammond’s Spirit of Somerset & Dorset Railway publication describes US  Army troops occupation of the fields on which Walrow Industrial Estate now stands for the storage of  1,045,000 5- gallon cans of gasoline. This was over 8% of the USA cased fuel storage in the UK . They all disappeared a fortnight before D Day!

We are grateful to John Palmer who produced the image below. Using information from the South West Heritage Trust of the R.A.F’s photographic mosaics of about 1946 and overlaying this onto the S&D Station has recreated this lost facility. 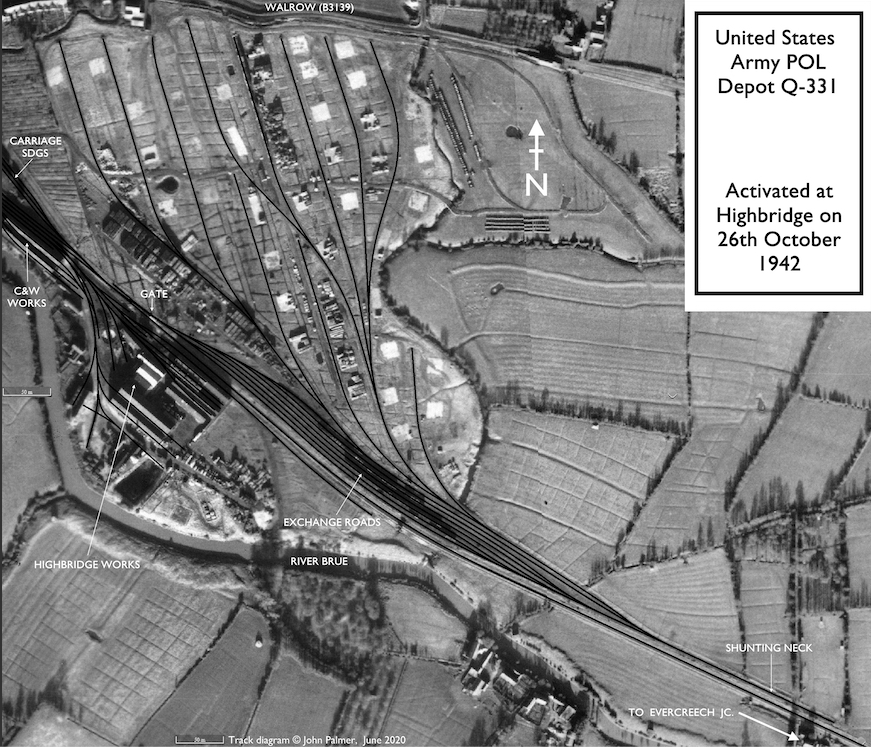 We are grateful for the Somerset & Dorset Railway Trust’s permission to use their image showing the grassed area beyond the coaches which should still have track there on the date taken 5 August 1962. 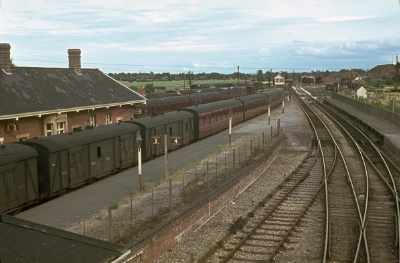 Commercial activity was affected by war, not only by rationing of materials but also by labour shortage: 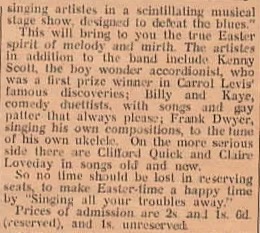 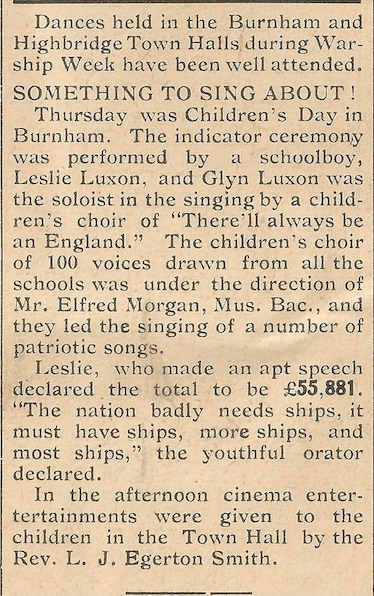 Warship Weeks were British National Savings campaigns with the aim of a Royal Navy warship being adopted by a civil community. A press announcement quoted the adoption of eight battleships, four carriers, forty-nine cruisers, three hundred and one destroyers, twenty-five submarines, one hundred and sixty-four corvettes and frigates and two hundred and eighty-eight minesweepers nationwide. The newspaper clipping above may be from the March event (photo below).

The Western Daily Press carried the following report on 12th October 1942 which mentions the adoption of HMS Burnham by the town using Warship Week proceeds: 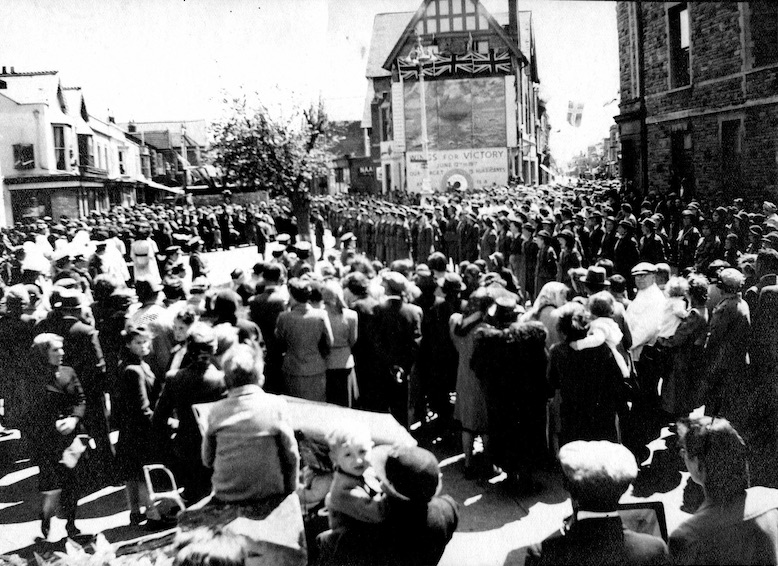 Other national war campaigns included  the ‘Wings For Victory’ week to purchase bomber planes, a ‘Spitfire Week’ to purchase fighter planes, a ‘War Weapons Week’ and a ‘Tanks For Attack’ week (see newspaper report above). Parades were often organised with military representation as part of the drive.

It appears from both pictures above that The Lifeboat Restaurant was a favourite place for mounting the publicity material for all of these events. Probably because of the open aspect and space for parades  to gather at this junction.

Below is a short film  by local amateur cinematographer Norman Gobey on 9.5mm, showing a Messerschmitt aeroplane put on display to raise money for the Spitfire fund during world war II. 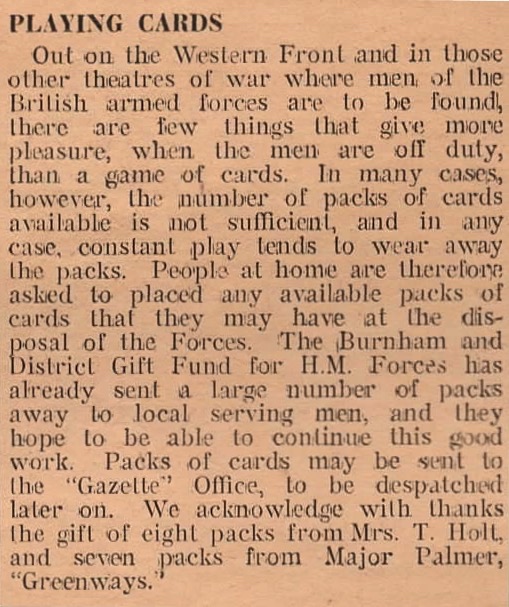 The picture below shows the localArmy Cadet Corps in 1944 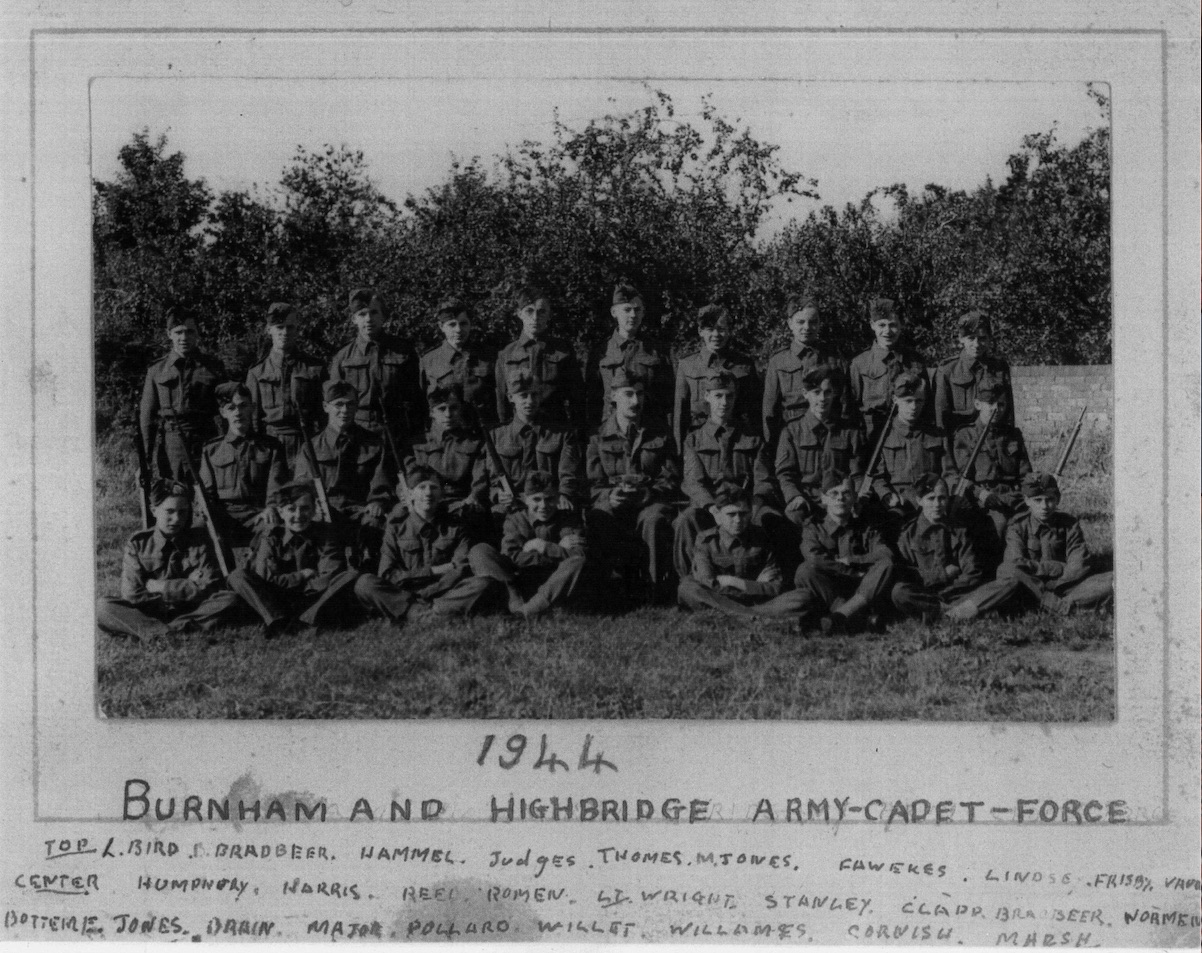 You will find scans of the Burnham Parish Magazine for September 1944 here. Of particular interest here is a warning about caution regarding the predicted end of the war and an appeal for male Sunday School teachers.

During and after the conflict there was of course a need to put a lot of effort into damage repairs. The notice below indicates that not everyone was pulling their weight. 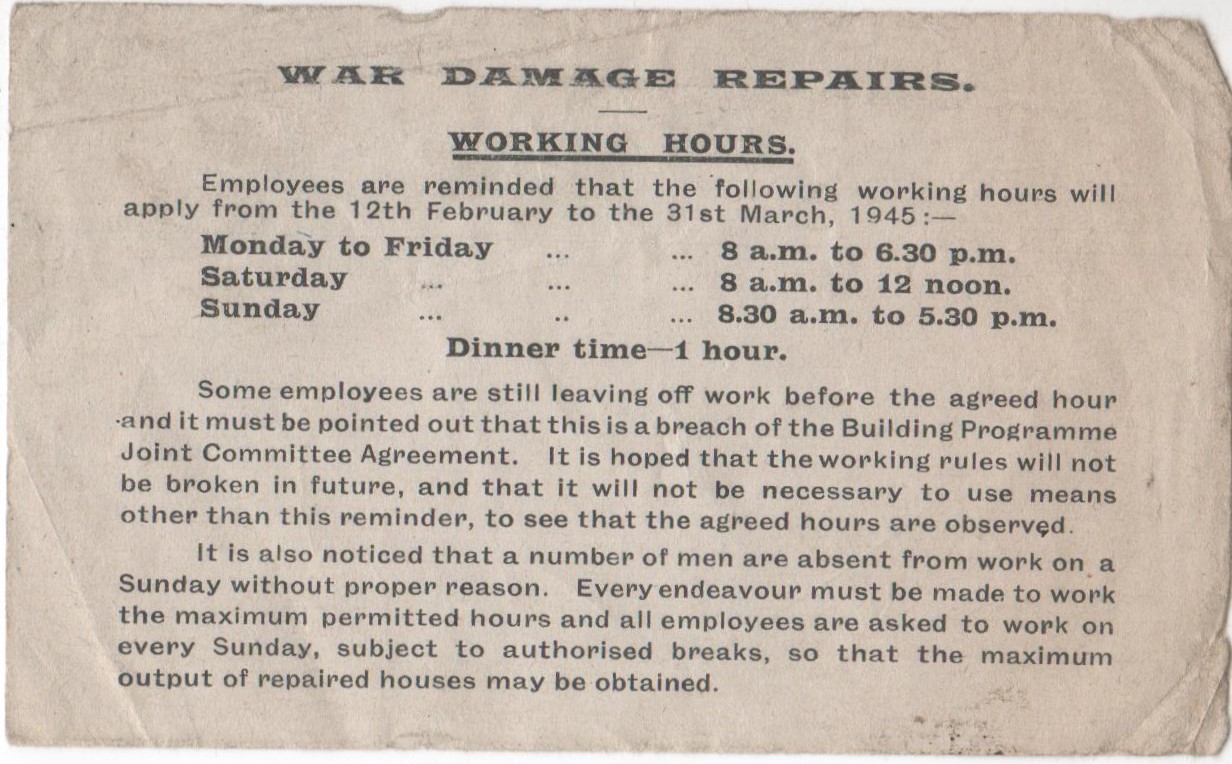 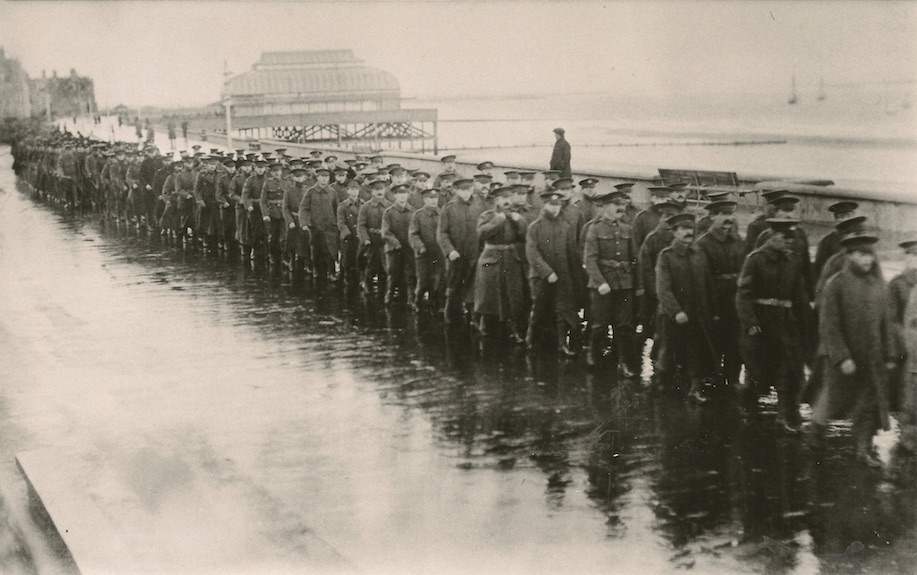 The South West fell into the Army 8th Corps district with H.Q at Taunton. In 1943 a reorganisation created sub-districts with the H.Q. for that of Somerset being at Burnham. Can anyone tell us exactly where this was? (Info from Somerset at War 1939-45 by Mac Hawkins). 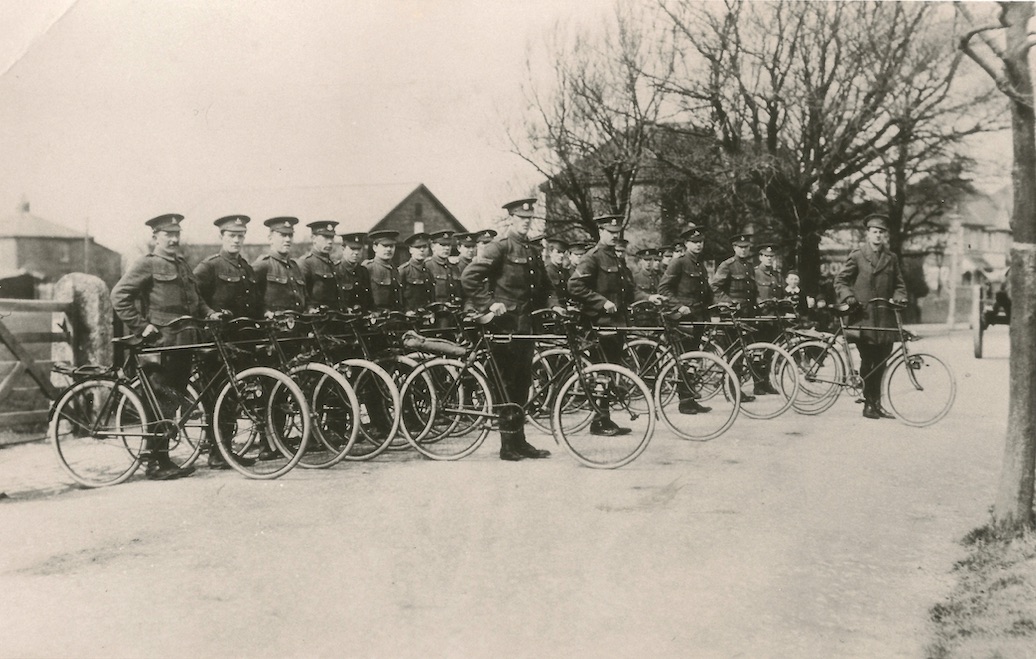 John Strickland says “I’m fairly certain this was taken in Lynton Road with the roof tops of Rosemary Cottage on the left; the Station behind the cyclists and Abingdon Hotel behind the tree. I remember that there was still a barred gate into the coal yard during my childhood. ”

In 1940 the local Home Guard was part of the 8th Somerset (Weston) Battalion. In 1943 however the 13th Somerset (Axbridge) Battalion was created to take over part of the 8th’s area, one of its 4 companies being based in Burnham  (Info from Somerset at War 1939-45 by Mac Hawkins).

You may also be interested in information about the wartime role of Brean Down Fort which you will find here.