On this page we will post pictures or questions about which we need further information from our readers.

If you can illuminate any of these please post in the comments box at the bottom of the page.

Does anyone know anything about this house: 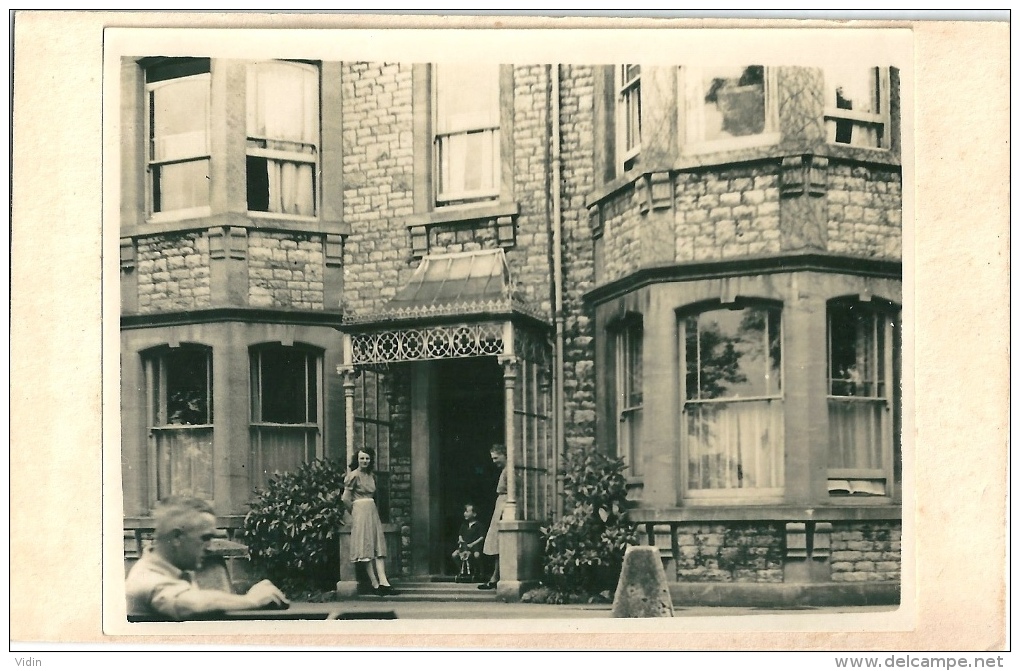 As most houses in Burnham were brick built, simply because the basic material was at hand, it is possible that as this house was built in stone it was done as a statement of wealth and status. Obviously the stone would have had to be imported, probably from Bleadon, which would have added to the cost.

Could it be Greystones / Graystones which was somewhere in Rectory Road?

21/01/2021 Updated information confirms that this is NOT Greystones. As the owner of Greystones was a member of the Akerman family who were involved with concrete products, it is likely that Greystones was constructed entirely of concrete, as was The Mount. Occupier of The Mount was William Savidge Akerman and family, “cement manufacturer” in the 1901 Census.

Still looking for information on this stone built house.

The odd looking vehicle below was possibly photographed outside Tregunter in the 1920’s or 30’s. Is this a newly married couple departing on their honeymoon? 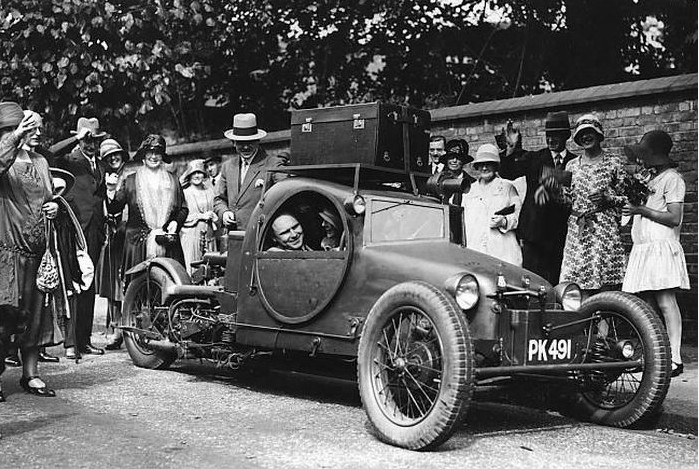 Des Parsons has supplied us with another photo which he believes to be of the same car (as it appears possibly unique) with a different paint job, apparently on a test or race track.

Does anyone know anything more of this unusual vehicle? 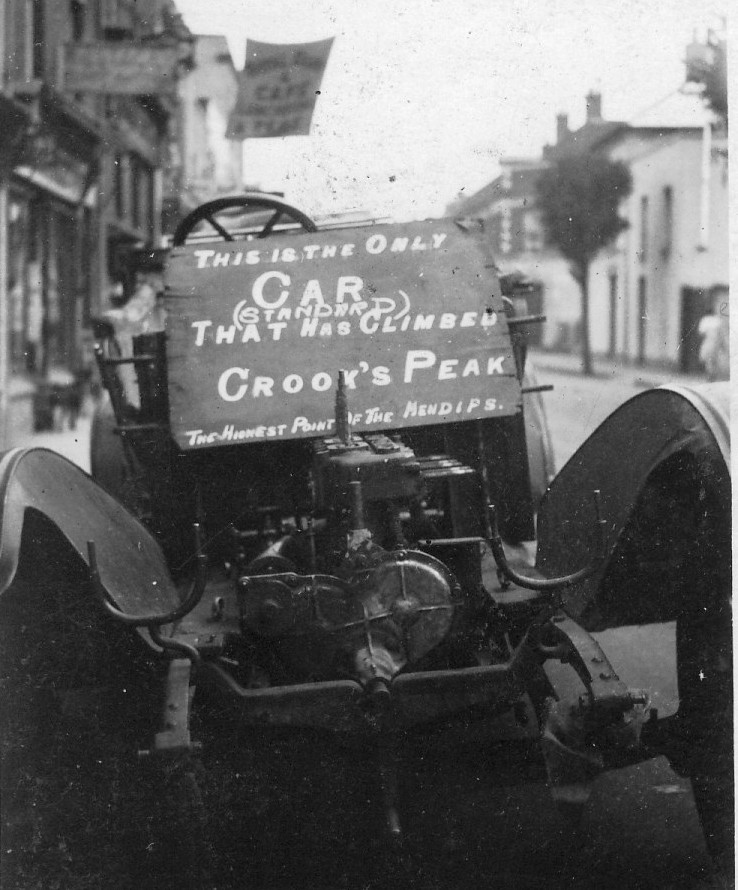 This picture is labelled ‘Pruen’s Car’, but it does not appear to be an unrestored Fiery Liz, a Daimler, as it seems to be described as a Standard. It appears to have been photographed at the north end of Alfred St (High St). Can anyone throw any light on the story of this vehicle and the claim made on the sign?

Alan Wheway has done substantial research on the whereabouts of this elusive address. He presents his conclusions here but would welcome confirmation or alternative thoughts.

Neither Parliament Row or it’s former name, Bug Row, is mentioned anywhere in any document or shown on any map, other than in the 1849 Report to The General Board of Health about sanitation issues in the town.

A Mr Norris, a nearby shopkeeper, describes the state of the ditch system He states:

“A nearly always stagnant ditch passes along at the side of the main street, in front of my house  the privies of 11 houses drain into  this ditch the whole both of their fluid and solid matters, and it receives, in addition the drainage of a large number of animals kept by the occupants of the houses. The first house is tenanted by a man who keeps, donkeys, pigs, ducks and fowls : he is a poulterer : his yard is six yards wide, and 20 yards long. The occupier of the second house keeps a horse, and usually two pigs. The occupier of the third keeps a horse. The four next are cottages, the inmates of which generally keep pigs. Next to these is a double house, used as a parish school, which is attended by, on the average, 60 children, and which has two privies. The last house has one privy, which is much exposed, and a public nuisance. The dung of the whole of the animals kept by the occupiers of these houses either drains or is thrown or swept into the ditch, with exception of some of the horses’.

“The road alongside this ditch is the principle thoroughfare from the station to the church, and the adjoining parishes.

“There are on average, about 150 people who use the privies, and the whole of whose excrement passes into the ditch, besides that of the animals

“ The ditch was cleaned out about three years ago, and the matter was thrown into the road where it lay  for more than a month, and vehicles were obliged to be driven through it at first, as it spread over a good deal. It was at last carted on to the land for manure.

The water in the ditch beformentioned, when it reaches a certain height, overflows into a mud-catch, communicating with another ditch and at these times- that is, swollen by the surface water- there is a slight current in it. The mud catch is 56 yards long and 15 feet wide, and from 9 to 11 feet deep, and it receives, in addition, the refuse of five houses: one of these is a school, another a bakehouse, the third is occupied by a tailor, with a wife and 10 children, and the last, my ow house, who have a wife, three children, and a servant

“by the time the ditch has reached the point opposite Mr Reed’s gate, it has received the refuse of 30 more houses, and at seven of these 102 pigs are now kept, and at times two horses besides, and the sullage of these animals also passes into it. The inmates of 16 houses in Love-lane, take the whole of their water from the opposite to drink.

“In Oxford-street there are four houses having only 1 privy, with a cesspool which runs over occasionally : the well is seven yards from the cesspool, and the water cannot be drunk, being affected by the drainage. The water was good when the well was first sank. The first house was occupied by a man who sold fish, and who used to go to the pump to cleanse them, and used to throw the foul water on the surface of the ground, and it siaked into the well.

“The next house to these four has a privy with an open cesspit : the next is adjoining a school, with a privy and an open cesspit, which is most offensive. The next is a large house divided into three tenements : it has one privy, which discharges into a ditch at the back, where the matter stagnates : close to this a bridge to a church path.

“In Victoria-place there are 19 houses having 14 privies, which all discharge into cesspools=some close, some open : one of these houses is occupied by a butcher, who keeps ordinarily two horses and two pigs : he has an open cesspit seven feet square and the same depth, in which he deposits the privy soil and offal.

“I sustain a heavy loss, I have not the least doubt, by the bad state of this ditch. People will not come into my shop on account the bad smells. I estimate the loss at about 20l a-year : I could almost swear to it. The smells annoy me much. At times we are obliged to keep every door and window shut, shop-door and all.

“I had fever in my house nearly all last summer. I have a wife and three children, and my family have hardly had a day’s health during the year, that we have been in the house : the children were attacked with scarlet fever

“My wife has suffered ten times as much as before since she has been in this house: she now complains of dreadful headaches, particularly in the morning”

The road alongside this ditch is the principle thoroughfare from the station to the church, and the adjoining parishes.

This must relate to what is now Manor Road / Oxford Street / Highbridge Road when the railway terminated at Highbridge. It would then have been known as Church Street / Cross Hill / Oxford Street. It cannot refer to either Victoria Street / Alfred Street (High Street) as the railway did not reach Burnham until 1858

If the ditch referred to is in front of George Reed’s house then it would mean that the 11 houses mentioned in the first paragraph of Joel Norris’s evidence are where St Andrews Church hall now stands. These buildings would have backed onto Unity Place (entrance in Victoria Place). Unity Place was a notoriously deprived area at that time in 1851

Next to these is a double house, used as a parish school,

This is Homebush, which is where The Burnham Society first met and was later a school. Somerset Heritage centre has a drawing on vellum of Homebush adjoining the school.

[Joel Norris is identified in the 1866 Kelly’s Directory as a grocer, linen draper and general outfitter. The 1871 census describes him as 61, retired and living in Oxford St near to Gass St, i.e. the gas works entrance.]

Please see the ‘Ocean Wave’ page for background information to this puzzle.

It appears that Clifford House, which until a few years ago housed a sub post office, and Ocean Wave house may have occupied the same or adjacent sites. There is also information that a yard at the rear was occupied by a sculptor, Arthur Emery, during the early 1900’s. However the detailed history of this corner of Abingdon St is not clear. Can anyone shed any further light on this?

RECREATIONAL CYCLISTS OF THE 19TH CENTURY 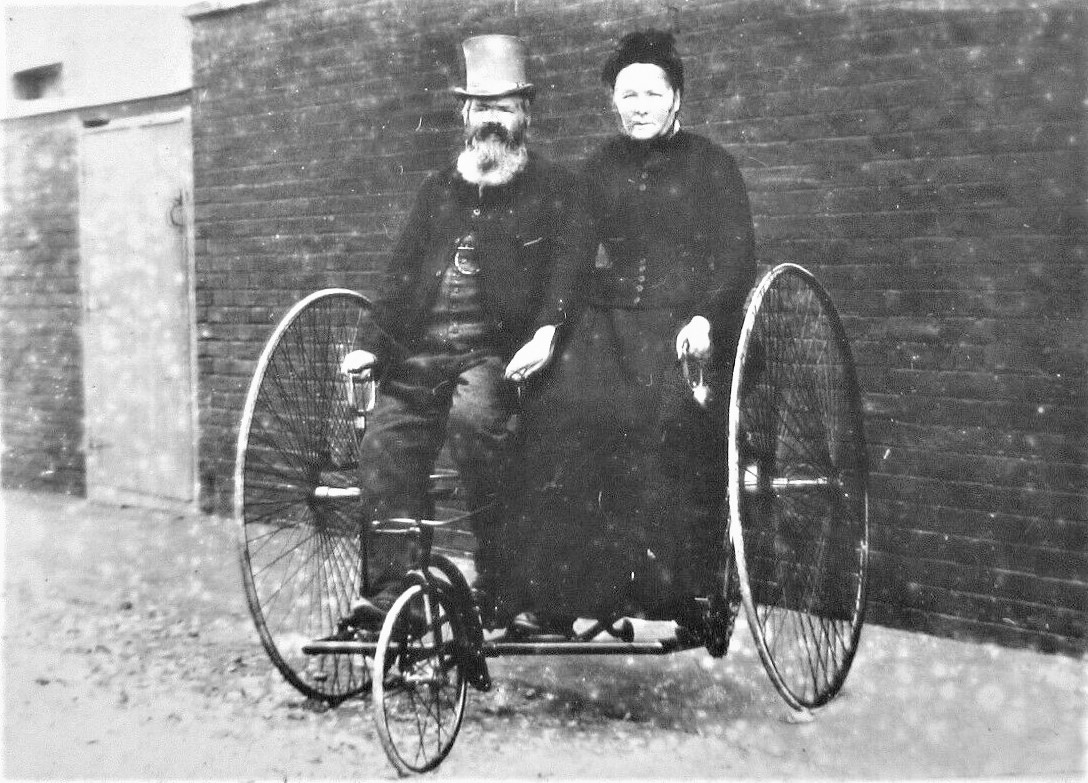 Just the thing when you want to give the horses a day off.

The only thing we know about this photo is that it was taken somewhere in Burnham.

The census information for 1861 and 1871 identified a property, somewhere around the junction of Alfred St (High St) and Abingdon St, by the name of Mount Pleasant (an odd name for a property in such a flat area). It is not clear from the enumeration exactly where this property stood and no references have been found to it in any other sources. The 1861 record shows it to have been occupied by two separate households: George & Susan Butt and Mary Ann Pearce. George is listed as a Chelsea Pensioner (aged 42) and both Susan & Mary Ann are listed as lodging house keepers. The other members of these households appear to be either dependents of the above named or  single individuals, probably lodgers.

The 1871 census is more confusing as it lists ‘Mount Pleasant’ in  two separated blocks of enumeration: the first is occupied by Maria Richards and her family and the second is itself subdivided into three households (those of  Christopher & Elizabeth Hayman; James & Mary Harris and Thomas & Mary Phelps), all of which appear to be single family occupations.

It appears that this was a substantial property which was subdivided but all other trace seems lost.

Does anyone have any additional information?

Clearly taken on manor Rd, opposite the gardens. The placard on the lamp post says ‘Town Decorating by Burnham Area Youth Club’. It appears to be late 1950’s or early 1960’s. Was this a regular event or a one off? Does anyone have recollections or information about this?

Is this possibly a celebration of Armistice Day or Empire Day, or something else; and where, possibly the Town (Princess) Hall?????