Philanthropist and benefactor of Ellens Cottages, Berrow Road and resident of St. Anne’s Villa, Burnham (see Around & About). 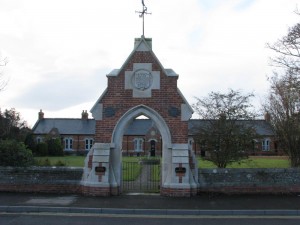 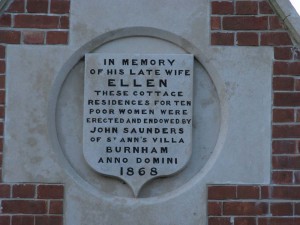 *Taken from the will of John Saunders of 4th April 1868

John Saunders was born in December 1809 the son of John Freeman Saunders and his wife Alice Dixon. His father was a successful wine importer who was born about 1778 and died in 1857. The company had numerous names, partners and locations but was known around 1835 as  Morgan Saunders and Company. John may have been involved with his father’s business although it is not expressly stated in the 1841 Census. It is now a part of the Croft’s brand.

Seemingly John and his three siblings were born into a non-conformist family as his birth and registration at Hackney are both accurately recorded in the non-conformist Parish Register for. He was born on 5th December 1809 and was registered there on the 21st May 1811, on the same day as his younger sister, Alice, who was born 11th November 1810. There were two other sisters Catherine born about 1815 and Emma born about 1823. John Freeman’s father was the Rev. Thomas Saunders one of a long line of non-conformist ministers (possibly Presbyterian or Congregationalist), which included the Rev. Julius Saunders who was imprisoned during the reign of Charles II for his non-conformist principles.

John Saunders married Ellen Louisa Stockdale 12th December 1840 at Stoke Newington, London. She was born 12th September 1812 in Hackney, London, Her father had been employed in the East India Civil Service but later built a career as an artist, a profession followed by Frederick and William Stockdale, Harriet’s brothers.

1851 finds John and Harriet living in Preston, Weymouth in Dorset, together with their two children, a son, also called John (1841 – 1867) and Harriet Ellen (1844 – 1899). In the Census records for 1851 and 1861 John senior’s occupation is shown as “Fund holder” which would seem to show that he had no need to find regular work, presumably living off his father’s estate. 1861 finds them living at Cleve House, Weston, Bath which according to his will was a Leasehold property.

Their son John had been a Lieutenant in the 13th Hussars and had married Dora Grace Montgomerie Alloway in 1865. This couple  had a son John William who was born in 1867 but a few days later his father sadly died. Dora Grace remarried Captain Easton John Cox in 1870. Their daughter , Harriett Ellen, married Elliott Armstrong in 1864 at Higham in Kent, apparently at the property of John Nesbitt Malleson, John Saunder’s solicitor. Malleson’s neighbour was Charles Dickens and one of Dickens’s two daughters, probably Mary, was one of six bridesmaids.

It is not known exactly when John Saunders bought the freehold of St Anns Villa but it appears to be uninhabited in 1861 although his gardener Frederick Young appears to be living on site at that time. when John and Ellen are living in Cleve House, Bath.

In John’s will of 1868 Frederick Young and his family are rewarded for loyal service and he is specifically named. In 1871 the census has Frederick and his wife Martha living at St Anns, but by 1881 Martha is living in one of Ellen’s cottages, where she is described as “Widow”. He also mentions another previous employee James Courtney, of which nothing is known, who also is to receive the same legacy. William Dark, coachman to John Saunders was also granted a bequest of £500. William signed two of the four codicils attached to the will of 1868. William invested his money wisely as is shown in the Census for 1871 and 1881 where he is the landlord of The Golden Lion, 10 Southgate Street, Bath. John Saunders’ will also provides a legacy of £250 to his female employees, plus their wages although none are individually named.

John’s wife Ellen Louisa died at St Anns Villa in December 1865. The Illustrated London News carries a notice of her death in the edition for Saturday 16th December 1865. Her cause of death is not known nor where she is buried.

Ellen’s Cottages were built in her memory and were in the course of being built when John first wrote his will dated 4th April 1868, some three years after Ellen’s death.

A parcel of land, which was part of “The Warren” had been bought in 1867, specifically for the ten cottages, to be called ‘Ellen’s Cottages’, could be built. It had previously belonged to Mr Hodges and occupied by John Prior Estlin.

Saunders’ will and four codicils is very complicated and anyone wanting to read the full transcription can read it here. His son, John, died in 1867 but no provision was made for Grace Montgomerie, the son’s widow. Most of John senior’s will is devoted to his only daughter Harriet Ellen, and his grandson John William Saunders (1867 – 1912

There are many variations to the will by the addition of four codicils which makes a multitude of changes between beneficiaries.

He left a large number of bequests in addition to Ellens Cottages: see below: 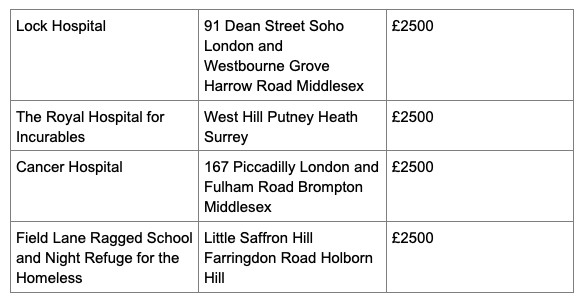 The following list of charities were to receive legacies which were at the discretion of the Trustees, if there was any funding left in John’s estate after all expenses had been paid out: 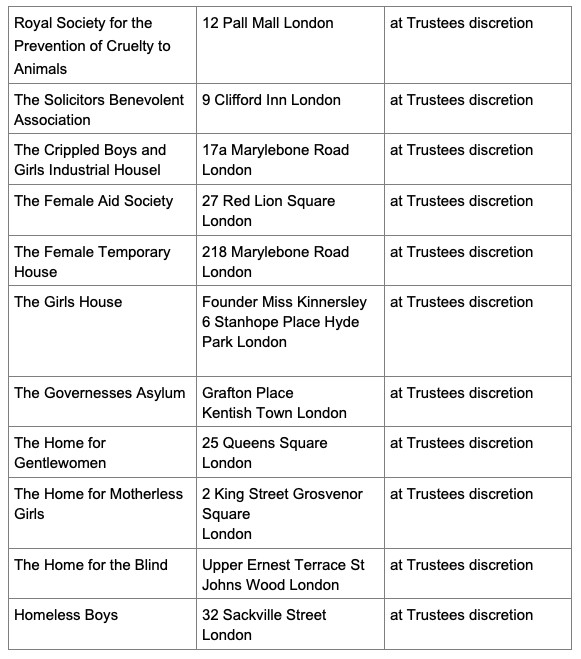 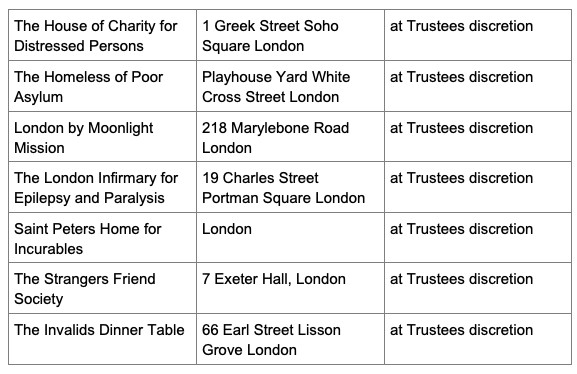 Judging by the nature of the charities that he left legacies to, most would appear to be those that helped people with untreatable diseases, the destitute and homeless.

The first legacy of £2500 to the Lock Hospital which was originally opened in1747 and moved to Westbourne Grove in 1842 and later in 1862 to Dean Street, Soho. It was designed specifically to treat patients suffering from venereal disease 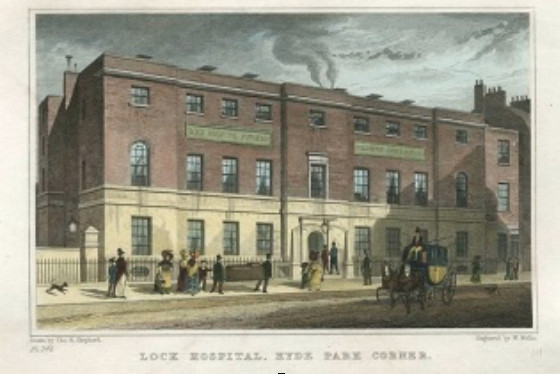 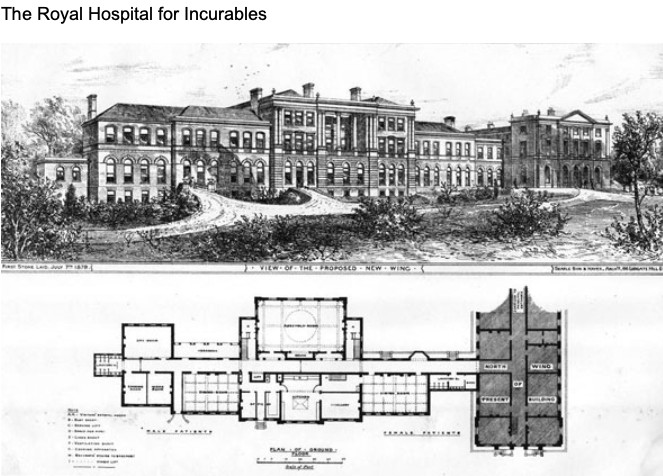 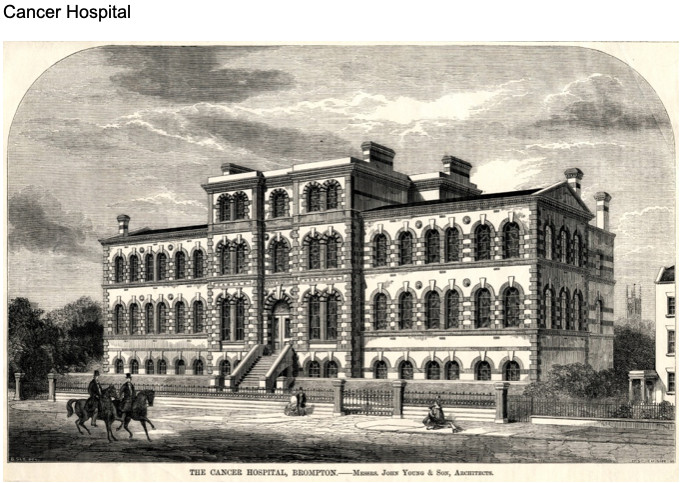 Field Lane Ragged School and Night Refuge for the Homeless 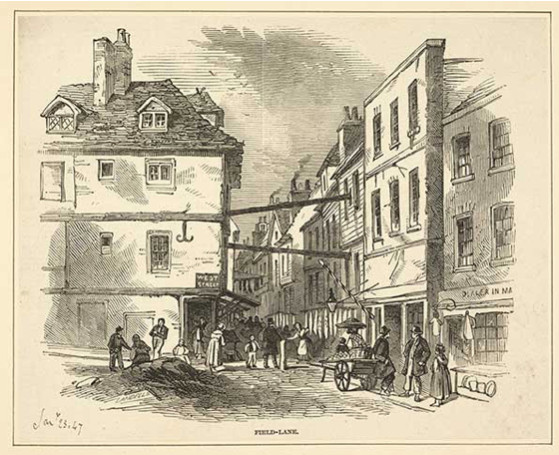 Field Lane Ragged School and Night Refuge for the Homeless, Little Saffron Hill is alleged to be the inspiration for Charles Dickens’s Oliver Twist.