For over 40 years Richard Locke tried out new ideas on his farms with great success;  endeavoured to demonstrate to his neighbours the value of the enclosure of land, and corresponded with the Bath & West of England Society.

His value as an agriculturist and farmer must have been considerable. Mr Billingsley applied to Locke  in 1794 for information regarding agricultural conditions in his immediate neighbourhood, and recommended him as a correspondent to the board. In 1748, John, Locke’s brother, inherited a meadow of seven and a half acres valued at £5 pa. The field was surrounded by high banks of earth and clay, which had been thrown out of the ditches, and was low and damp in the centre. Richard advised that the banks should be removed to a depth of 6″ below the surface, and that the earth thus obtained should be spread evenly over the whole field. This was done, and beans, blue marrow peas and white clover seeds were sown the first year, the whole thing carried out at a cost of £20.

The 2nd year, a good crop of grass was obtained, and at the end of 5 years it was considered rich pasture land and let to a tenant at £15pa., three times its original value. Belonging to the same farm was another field of 8 acres, situated near the sea-wall at Burnham and bequeathed by John DOD to Hannah, Locke’s sister. The meadow was full of pits and pools, as earth had been taken to repair the sea-wall, and it was leased to a tenant for 5 years at £4pa. By the time that this lease had expired the improvement on John’s meadow had been completed, and its success proved a powerful motive to attempt doing something to these 8 acres. £40 was  spent in draining and levelling the land as before, and in a short time it was worth £15pa., nearly 4 times its value in 1748. Within 40 years Hannah’s husband, William KENT, had sold it cheap for £360.

A third field in this farm, called Poundhays, was owned in 1748 by Locke’s mother. [John DOD’s Will] These 4 acres were of such poor quality that the tenant refused to pay more than £1pa., and as this did not cover the cost of the fences and taxes, the field was left open and was “worth less than nothing”. After much contemplation, Locke remarked that when travelling in early life in Cornwall, he had seen people spreading wet sand, saturated with strong salts of alkaline, on the ground.  As Poundhays lay open a half mile from the sea, he decided to try the method. He was disappointed, however, for to reach the shore, he had to cross high sand dunes and before the sand could be brought back, it had become dry and therefore lost much of its value. Nevertheless, in 1765 the field was a levelled and covered with 150 loads at 30 cwt each, consisting of dry sand and dung.

The experiment proved effective, and the  meadow leased to a tenant for 21 years at £5pa. On the expiration of the lease in 1786, the rent was increased to £6pa., though Locke said “It was worth more”. Ten years later a prospective purchaser offered him £350 for it, but he refused this as it was “£20 short of my demand !”

The last example illustrating the increases in the value of land, when the owner was of a speculative nature, concerns a meadow of 6 acres bought by Locke from Marsh Dickinson Esq. in 1757. Locke paid £40 for this meadow and let it to a tenant at £2pa. Levelled, drained and treated with dressings of rotten dung and good black earth, the meadow improved considerably and after a while was leased to a tenant at £16 pa., and then finally sold for £400, 10 times the amount Locke paid for it.

Such improvements as these could rarely be carried out, unless the land was enclosed, and although much of Somerset had been enclosed before the 18th century, a large part remained under the open-field system of cultivation.

Locke, was an eager advocate of enclosure, he first took an active interest in the enclosure of land in 1760 when he began to publish pamphlets on the subject. In 1769 he purchased an estate of the Rev. Sir George Stonehouse and proved to him that Churchlands Commons in Wedmore, valued at £20 each, would be worth £100 each of enclosed. [None of these essays (pamphlets) have been found, probably therefore many were written without his real signature]. The work was done by Locke [The surveying of 20,000 acres of moor and waste for Stonehouse] without fee or reward, but not without the spilling of blood: “During my survey I have been stoned, bruised and beat by a mob till the blood have issued from my nose, mouth and ears”. On one occasion he was burned in effigy. In 1796 he could congratulate himself that Somerset was considerably the richer for his perseverance.

With rise in value of land, rents increased, farmers feared bankruptcy. At Lympsham rents were doubled in one rise, but industry and hard work triumphed. Locke: “The only differences discernable between Lympsham farmers who rent, and the farmers of some neighbouring parishes who occupy their own Freeholds, is this; the tenant performs the labour of the farm himself well, the owner hires servants to perform the same labour ill”

Finally, the amenities of life came nearer, for the influx of wealth said Locke, “provides us with a shop, a butcher, a baker, a surgeon, an attorney and some gigs in every parish; but when I remember first none of these existed between the two market towns, Bridgwater and Axbridge.”

There follows this arithmetic in pencil:-

Below is an extract from a report in the Bath Chronicle of 3rd October 1816: 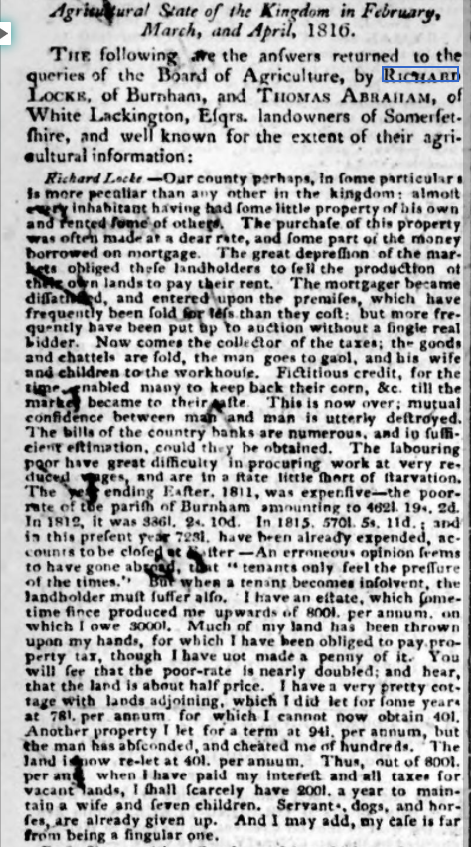