An article in the WESTON MERCURY AND SOMERSETSHIRE HERALD 30th Oct 1886 gives us an insight into the nature of charitable provision during Burnham’s early years:

It tells us that a public meeting under the auspices of the Charity Commission took place at the church vestry “for the purpose of enquiring into the foundation, endowments and objects of the several  parish charities, their present circumstances and condition, and of ascertaining whether any and what improvements might be made in their management and application.”

A number of charitable bequests were reviewed:

The Rogers charity – founded by the will of Henry Rogers 1672 – rents on land to be distributed to 20 – 40 poor  of Cannington, Porlock & Burnham.  £32. 16s. 3d. had been received by Burnham the previous year and  divided amongst 3 individuals.

The Harris, Card & Dean Charities. Nearly 150 years previously the Rev. Harris, vicar of Burnham, gave £10 to parish stock for the  interest to be distributed in bread annually at the discretion of the ministers and churchwardens. In 1790 Mrs Card gave £10 similarly and in 1802 Jacob Dean gave £20. These charities had been lost sight of for probably 30 years. It was discovered that the combined amount of £40 had been  inadvertently advanced to the Treasurer of the Union in 1841 and used for the building of dwellings  for the poor. To rectify the situation these premises were sold and a claim for £40 from the proceeds was made but this also appeared  to have been sidelined in some way. Further investigation was to be undertaken.

Golden’s Charity. In 1797  the Rev. John Golden, vicar of Burnham, bequeathed £100 of bank stock, half of the interest to be expended on religious books, to be distributed in Easter week, and half on bread to be distributed in Christmas week amongst the poorer residents of the parish. The National School had been one beneficiary of the books. Objections were raised to the system of bread distribution and it was thought advisable that new schemes for the administration of the  charities should abandon this kind of relief.

Elizabeth Caroline Baldwin, spinster of Bath, bequeathed £100 in 1849 to produce annuities to be distributed to the sick and aged poor of Burnham.

Labourers’ Charity. The origin of this charity was unknown. 48/- distributed annually at Easter amongst the poor of the parish. Known as ‘day-labouring money’, it was paid from the rates. None of those present knew when it had last been administered!

Ellen’s Cottages: Land and cottages were conveyed by deed in 1863 to trustees, for occupation by 10 women of good character (not exclusively from Burnham) over 60 years of age. Appointments twere to be made by the vicar of the parish or other appropriate minister. Sums had been invested for provision of the services of a medical officer and a gardener, necessary repairs,  a weekly allowance and Christmas bonus for the residents as well as for furnishings. It was noted that the houses were in good repair and the residents contented.

George Tucker bequeathed £130 for investment in 1859, half the interest to be applied to maintenance of the National School, the other half to be given to Huntspill for distribution.

Rev. David Davies  of Burnham had bequeathed income from land of £2 annually to the vicar to apply to support of Sunday school. 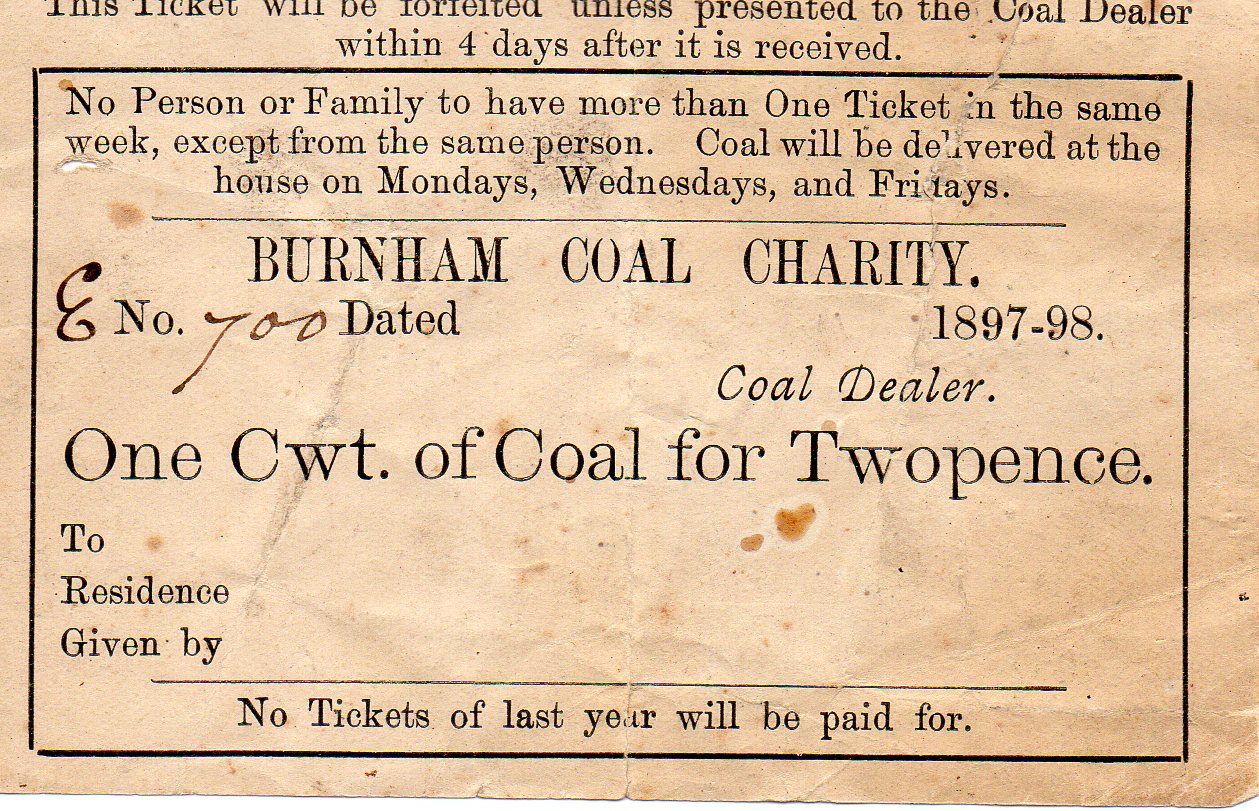 It is not clear whether the ‘Coal Club’ (below, 1902) was connected with this nor  indeed whether it was a charitable venture or a co-operative, though the motto suggests it was a fund for the ‘deserving poor’.

We know nothing more about these so any additional information would be welcome. 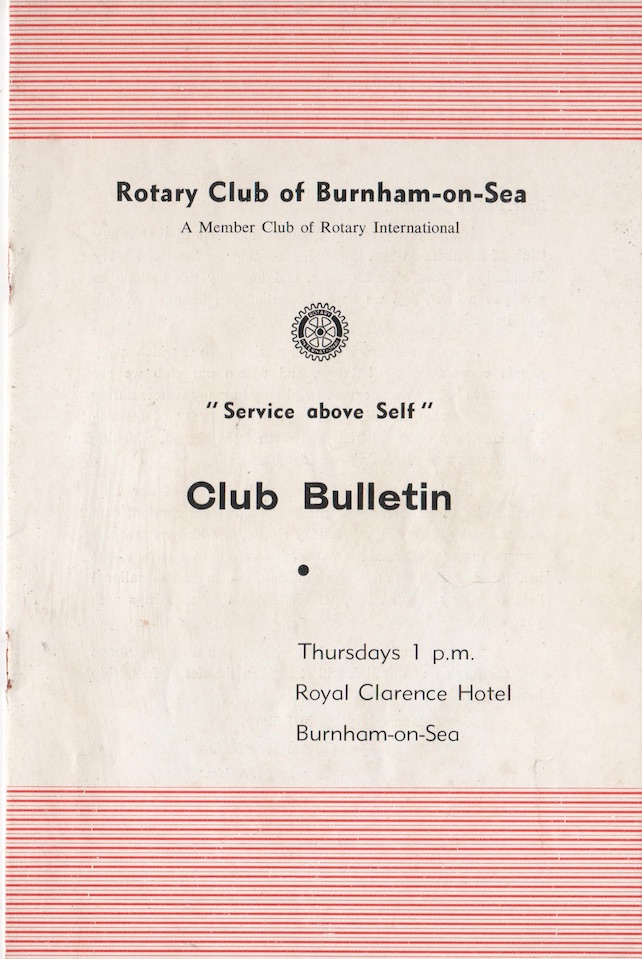 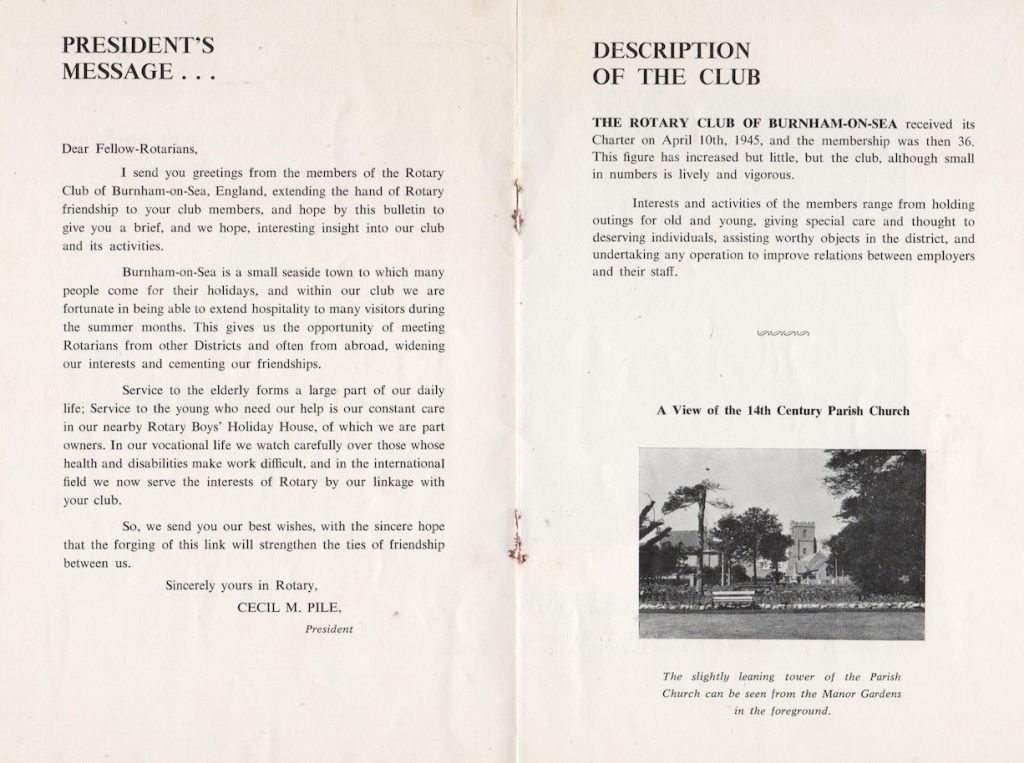 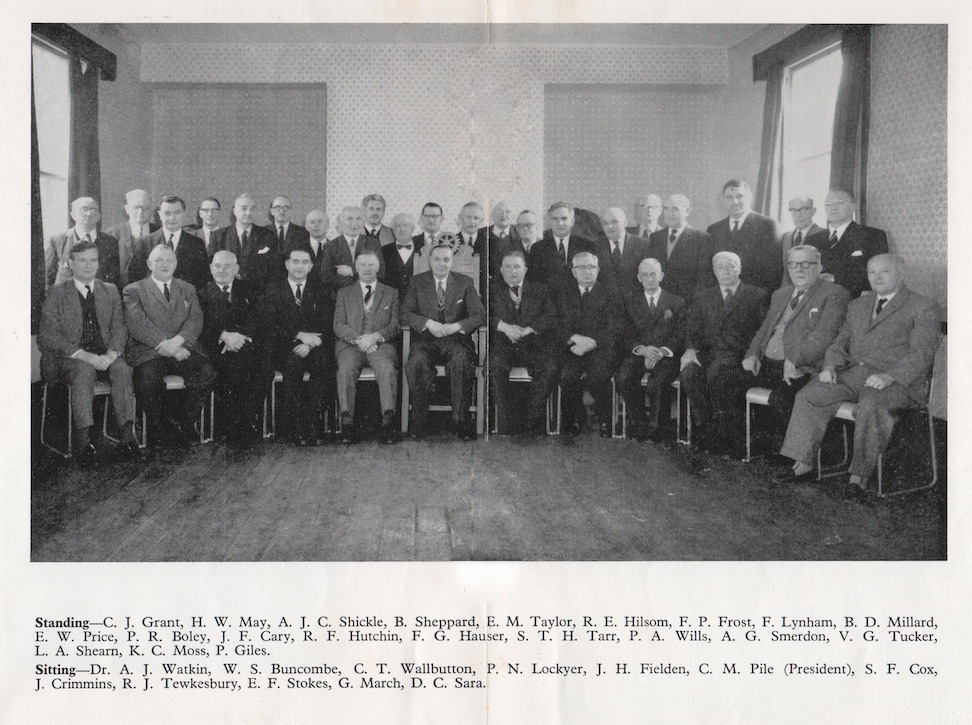 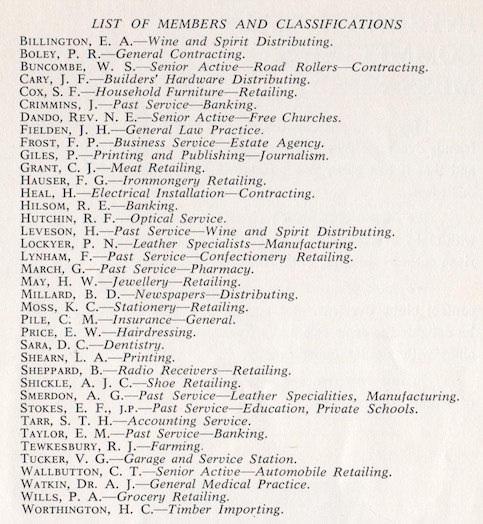 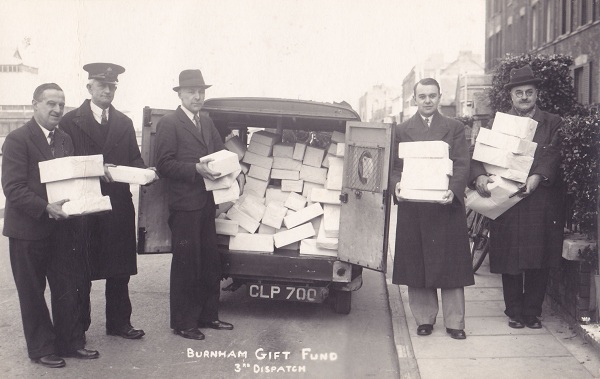 We have now discovered that this was a charitable drive during WWII to provide gifts for members of the armed forces (see Wartime page for further details).