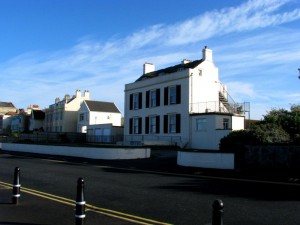 The heart of an ambitious project by the local curate to turn Burnham into a Seawater Spa.

Steart House was built by Rev. Davies, Curate of Burnham on Sea, Berrow & Brean, as part of his spa development. There are no doors at the seaward side of this building,  as at the time of its construction only sand dunes existed here with the sand frequently blown onto this area. Access was by carriage drive from Berrow Rd via a strip of land in the area now marked by Myrtle Drive.

The project was begun in 1822 when 2 wells were dug in what is now the swimming pool car park, – 1 of 75 ft., and another of 25ft. The waters were chalybeate and sulphurous.

In 1827 Davies exchanged with Dean of Chapter of Wells, ground adjoining the vicarage for a plot of sand dunes which gave him the land needed to develop the spa together with the money received from sale of rights to lighthouse in 1829.

Steart house was built as the spa site developed, to enable small sea baths to be taken (in the basement water was pumped to individual baths at high tide from an inlet). There was also a reading room and a pump house where the spa waters could be consumed.

The Spa complex, Daviesville, as it was called, was probably completed by time of his death in 1833 or 34. It was initially run by William John (originally a tenant of Davies) until its sale in 1856 to Mrs. Margaret Jones, who continued trading until 1874. At that time there seems to have been an attempt to develop a new company and operate a larger spa but this failed. Daviesville comprises nearby Beverley Cottage, Marine House and the Round Tower buildings.

Discover the next location on the trail: 13. Catherine & Julia Terraces