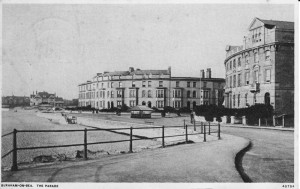 Local developer George Reed was responsible for the erection of the two fine terraces at the end of the North Esplanade which are named after his daughter Catherine and Granddaughter Julia.

Prior to this time there was only a large area of sand dunes and warren extending southward from the Poplar road area to the church.

Details of the building of these terraces are not clear. Some sources indicate that planning and possibly even building began before the end of the 1850’s,  both Terraces are shown on a plan of the town dated as early as 1852. Another source tells us that Catherine Terrace (the south crescent in Sea View Road) was built in 1861*. However the north crescent, Julia Terrace, was described by Vicar Dupuis as still a carcass in 1867. The interior  was not finished until several years after the building.

*Ref (V.J. Wrigley’s – A History of Burnham-on-Sea and Highbridge).

Many of these residences were opened as lodging houses for holiday makers and a Mrs. Sarah Williams ran a boarding school in Catherine Terrace in 1866 – just one of at least two in this location. (Kelly’s Directory of Somerset).

The original North Esplanade, developed during the 1840’s & 1850’s, extended only the width of the road in front of the terraces, and the beach lay immediately beyond, causing the properties to be lashed by water at stormy high tides.

The plaza area which now exists between the properties and the sea was built as part of the new sea defences after the floods of December 1981.

Discover the next location on the trail: 14. Low Lighthouse