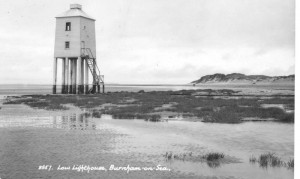 Built, together with its tall companion, in 1832, this little character has become a unique mascot for Burnham on Sea.

Following a survey of the Bristol Channel by Lieut. Henry Denham R.N. Burnham High and Low lights were built, on his recommendation, to a design by Joseph Nelson and inaugurated in 1832 . The Low Light is a picturesque square wooden building which stands at the high water mark on nine huge oak stilts, providing little resistance to any water and therefore remaining undamaged by the sea. Each of the tower’s legs is sunk sixteen feet into the sand. It stands 35 – 40 ft high depending on varying level of beach. During construction a worker was killed when he fell from the top.

The southern and western sides of the tower have square windows through which the light is visible. Steps aid access to the rear; these, having been removed for a period due to incessant vandalism, are now back in place. The steps did not originally turn the corner around the back leg but had to be extended due to the drop in the level of beach.

‘Trinity Path’ leads from the High Light on the Berrow Road to the beach near the Low Light and was used by keepers to move between the two. It was also used at one time as a route for transporting, via narrow gauge railway, coal which came by small boats from the Forest of Dean and South Wales to a wharf near the Lighthouse.

The High Light used a flashing mechanism, whereas the Low Light showed continuous fixed white and red lights. By using these two lighthouses, carefully placed, the exact bearing of the deep water channel into the Parrett estuary could be located. A vessel would line up the lights one above the other to show the entrance to the channel.

With the coming of electricity to Burnham in 1927 the paraffin vapour lamps were made redundant and replaced by a 1000 watt electric bulb in the High Light with a range of 15 miles and a 500 watt bulb in the Low Light with a range of 9 miles. In 1969 a ‘sector’ light was installed beneath the main lantern of the High Light. In addition to the flashing white light this provided a light of three colours – green, white and red – all of which used together could provide shipping with the correct bearing for the deep water channel. The sector light made the Low Light obsolete and it was therefore discontinued in 1969. However, it was recommissioned in 1993 as an additional aid to navigation and is a Grade I listed building.

The nine-legged landmark is an attraction in itself, being used in the town’s coat of arms, local signs and literature, and much photographed by walkers and reproduced by local artists. When it received a ‘make-over’ a few years ago, a total of 50 litres of Cuprinol opaque wood finish was used to protect the structure from the elements!

Follow this link for information about the switch-over of the lighthouses in 1993.

Discover the next location on the trail: 15. The Hall