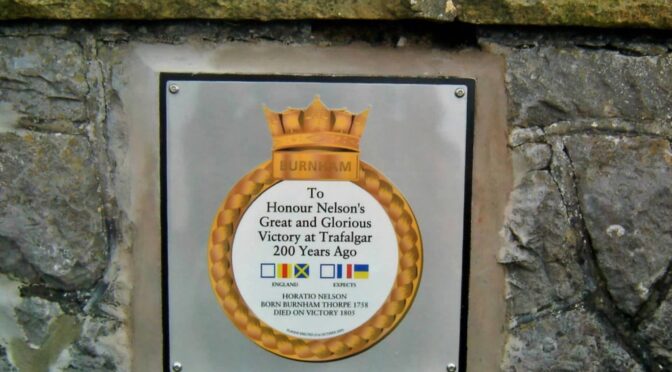 To mark the 200th Anniversary of the Battle of Trafalgar in 1805 a celebration was held which included the unveiling of the ‘Nelson Gates’, part of the Marine Cove regeneration project, and the unveiling of a plaque commemorating H.M.S.  Burnham. 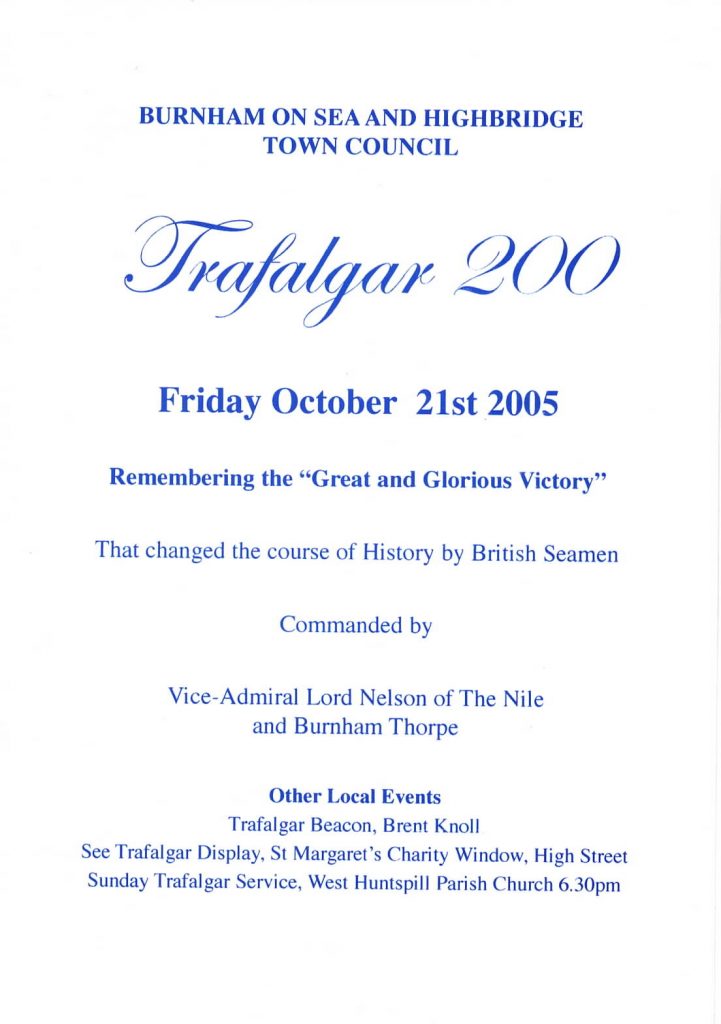 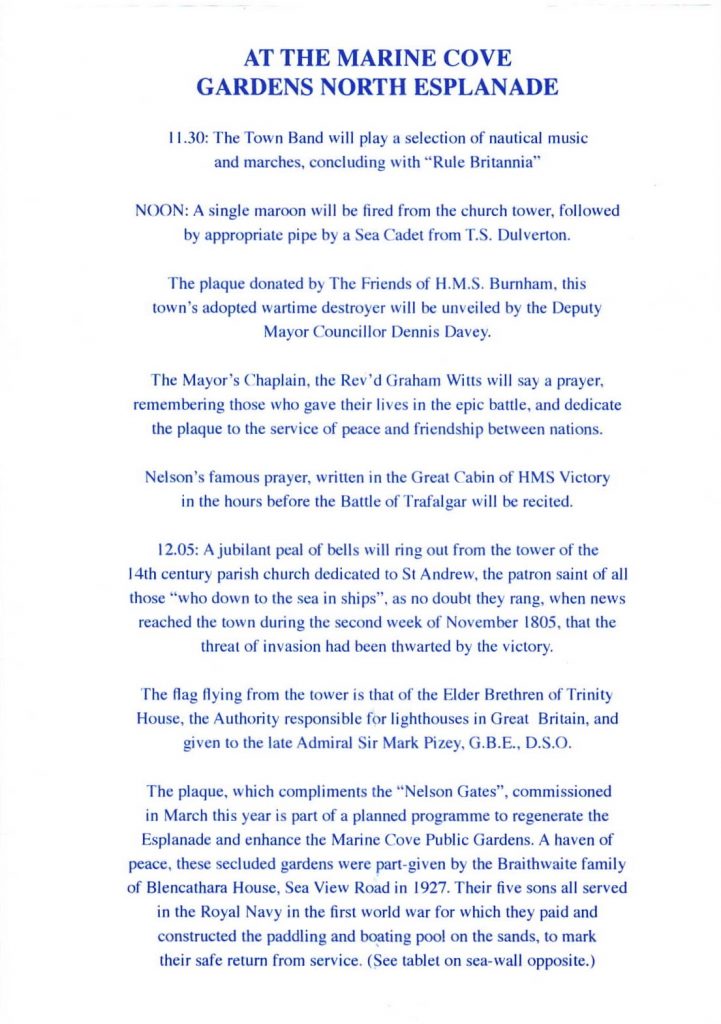 Thanks to Ann Popham for loan of brochure.

The Burnham Heritage Trail was funded by the Heritage Lottery Fund and developed by the N.S.L.H.G. in association with Somerset Film and supported by the Town Council.

An annual ceremony takes place to give awards for outstanding contributions to the community.  Below are extracts from  an example programme from 2014. 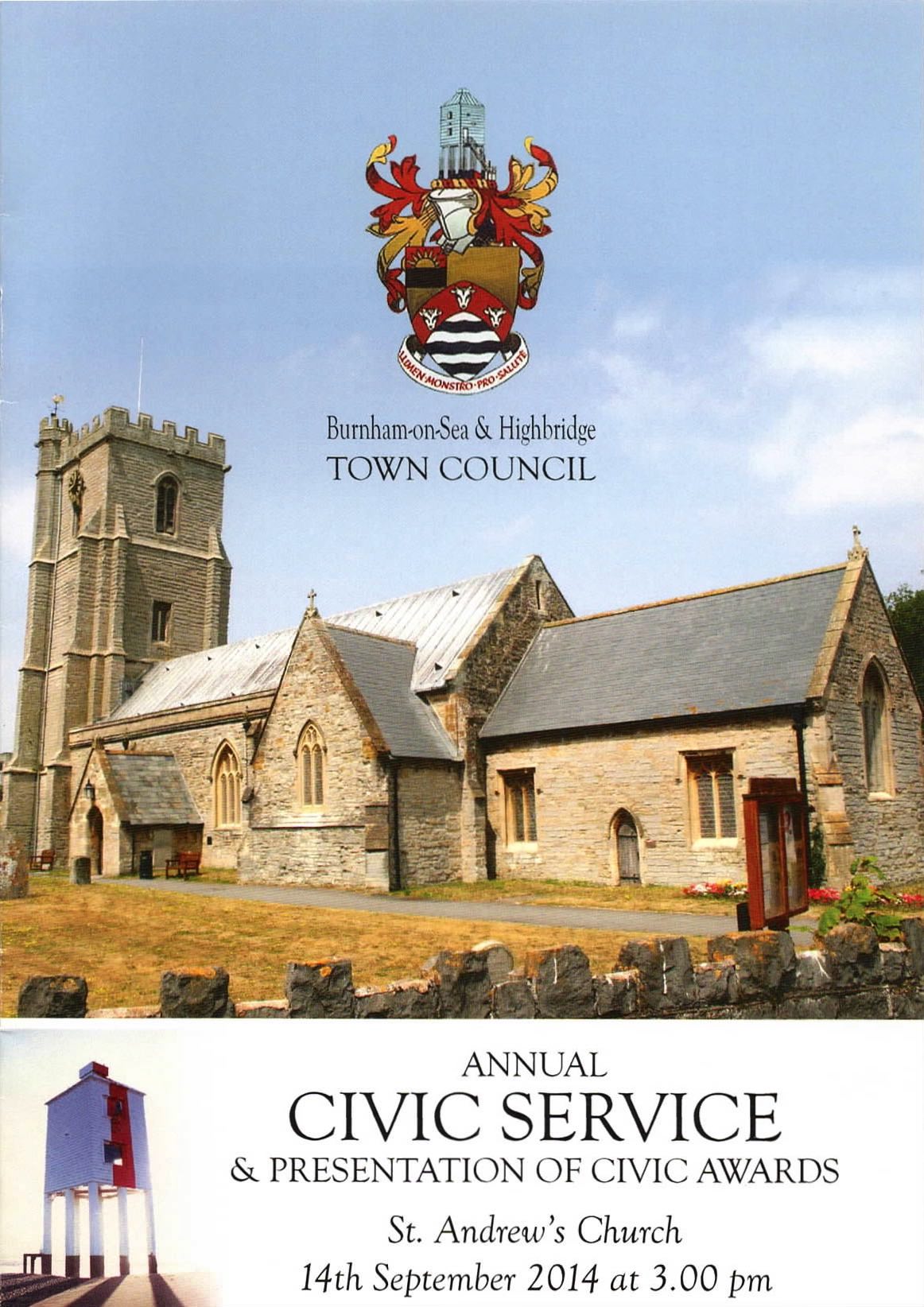 Two plaques commemorating the receipt of destroyers from the U.S.A. during WWII were placed on the sea front (see information about ‘Warship Weeks’ on Wartime page).

In 2009 discussions began with BAE Systems about recovery of a set of buffer stops, similar to those once used at Burnham station,  from the former Royal Ordnance Factory site at Puriton.

Refurbishing the stops, Identifying a site for them as close as possible to the site of the original Burnham terminal buffer stops and securing permission, all legal necessities and agreements with the Town Council  about ongoing upkeep proved a lengthy process, which was undertaken by a special project group of the North Sedgmoor Local History Society, with the support of a number of other agencies.

It was not until 2015 that all of the necessary work had been completed and the buffer stops were ready to be unveiled. The stops now form the starting point of the Heritage Trail.

A core group of members of the Buffer Stops project group went on to develop an independent group to promote Burnham’s railway heritage.

As its first project the group had hoped to source a  signal of the original type  to be erected near to the site of Burnham’s original signal. It proved impossible to obtain an old signal in sufficiently good condition. It also emerged that such a structure would exceed the height allowed by planning regulations. Efforts were therefore directed at sourcing a replica signal, with the help of the  Gremlins Carnival Club.

As this turned out to be lengthy process an interim project of  obtaining a replica station sign to be located on the site of the old excursion platform alongside Marine Drive, close to where the original sign stood.

Following on from this in June 2016, with the co-operation of both the Town Council and Somerset County Council, the name of the portion of Marine Drive between its junction with Pier St and the entrance to the Burnham Holiday Village was renamed ‘Old Station Approach’ 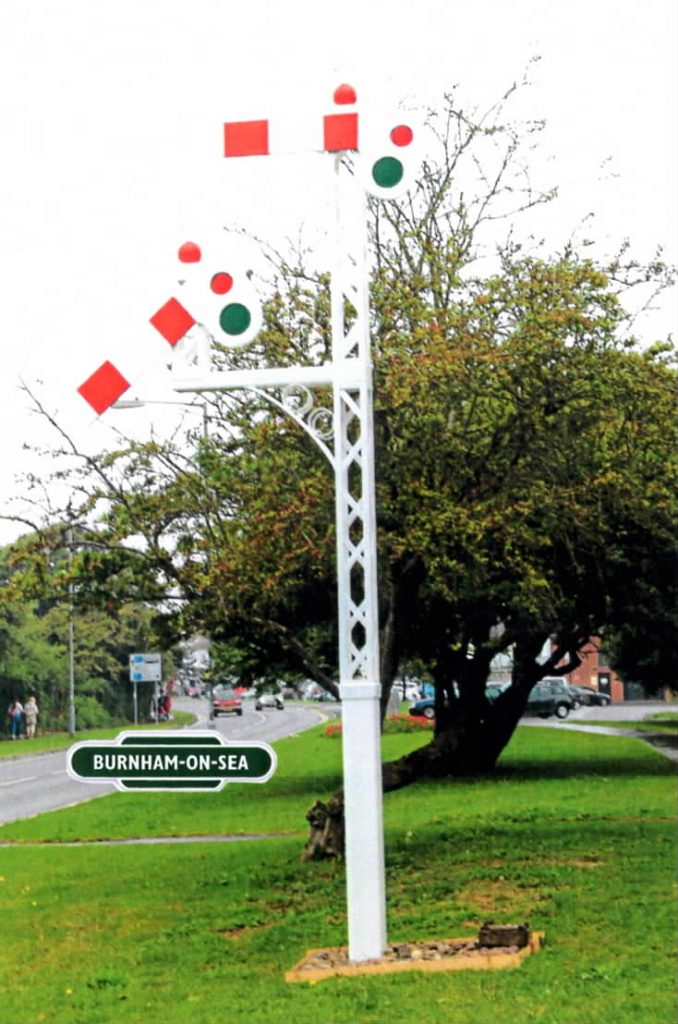 The replica signal was installed alongside Marine Drive in August 2016, its pebbled base surround incorporating the base of the original signal post.

In October 2016 an information panel featuring a1929 map of the station and coal yard, which had been donated to the group was erected in the  park which now occupies part of  that site.

A weather vane, featuring a railway locomotive bearing the number of the last locomotive to leave Burnham-on-Sea, was erected on the town green,  which stands on the site of the old station forecourt, in November 2016. 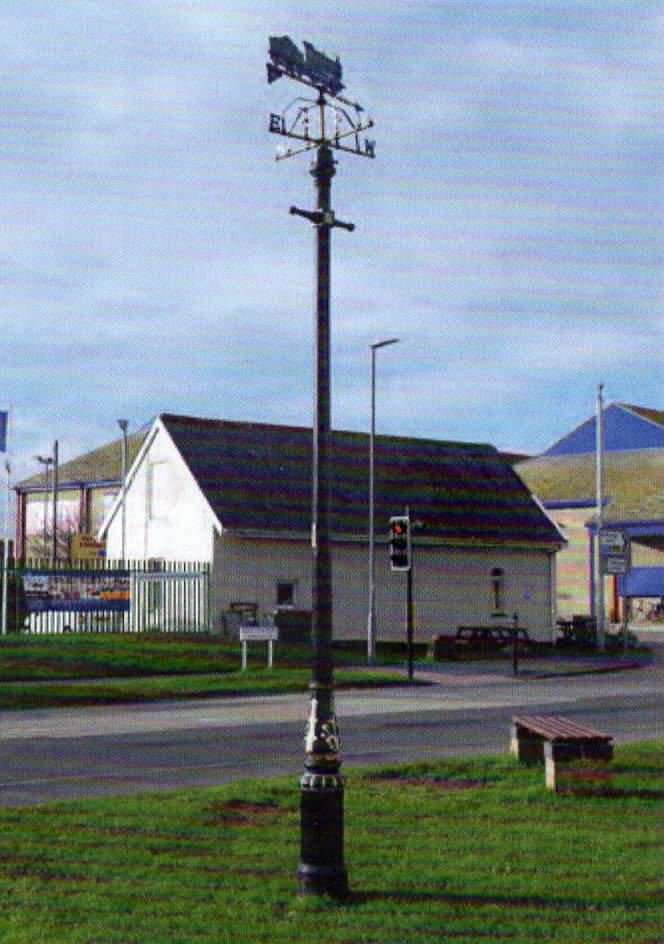 In January 2017 another information panel was put up near to the Burnham-on-Sea name board with an illustrated account of these items.

The items were formally unveiled in March 2017. At this time the children of St Andrew’s Junior School presented a framed collage of the railway and town which is on display in the Information Centre.

An illustrated walk leaflet is also available at the Information Centre.

More recently a replica signal box, based on the original Burnham box held at the Washford Railway Museum, was erected in the same general area. It is hoped that this box, as well as being a commemorative artefact, will house a number of ‘pop-up’ ventures.

The S&D Railway Heritage Walk has now been formally opened. 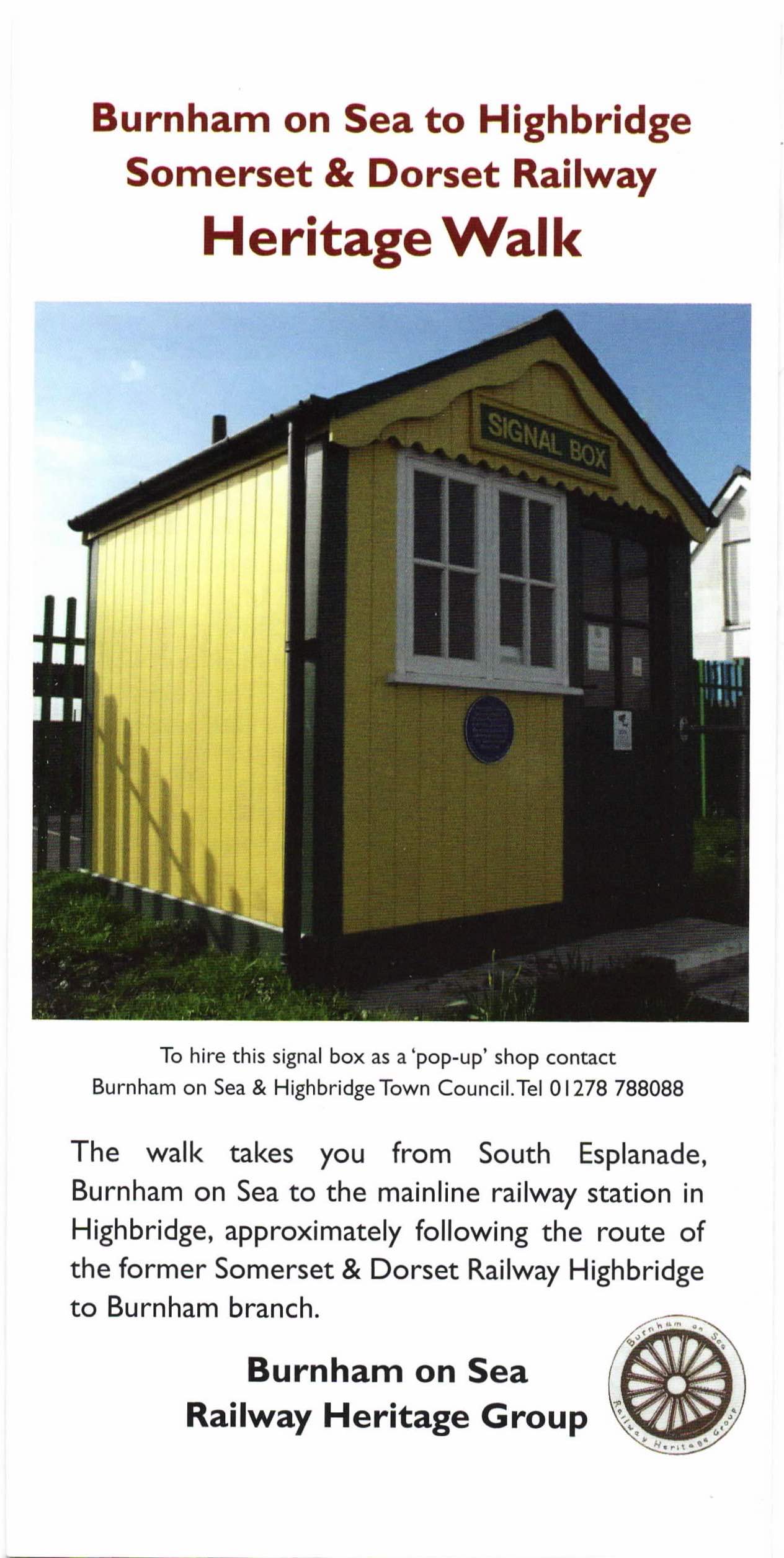 Thanks to Ann Popham for Railway Heritage Group information & images.

The 160th anniversary of the opening of the line into Burnham ( first passenger train May 3rd 1858) was commemorated by a 4 page anniversary supplement in the Burnham and Highbridge Weekly News and by a ceremony on the site of the commemorative buffer stops. 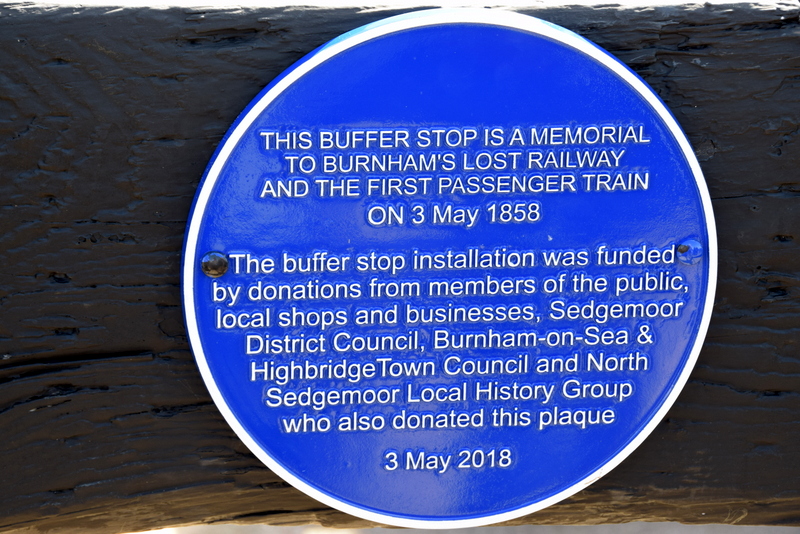 A leaflet was produced with an illustrated walk down marine Drive along the track site and through the Apex park returning along the River Brue, as well as a commemorative replica ticket. 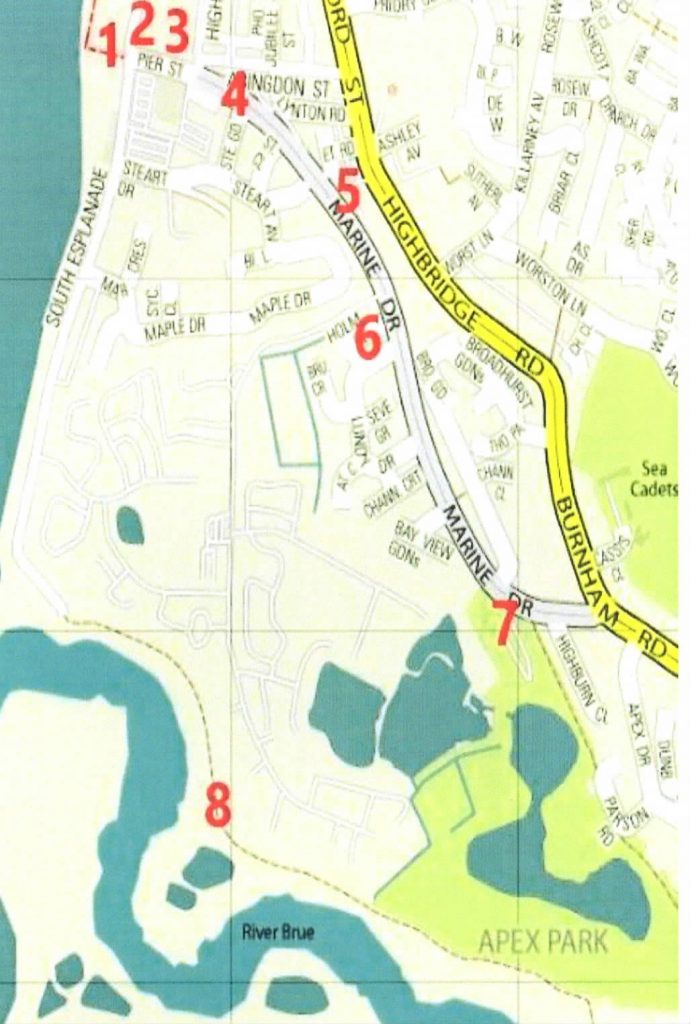