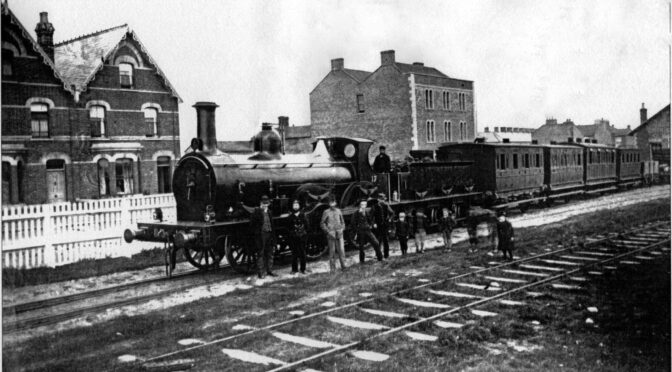 Extracts from a lengthy report in the Bridgwater Mercury and Western Counties Herald 5th May 1858:

The public undertakings were opened with considerable éclat (brilliant display or effect) Monday last. The first train of the day started from Highbridge shortly before nine o’clock with a tolerable load of passengers. The railway officials did not appear very much pleased with the matter, for the little locomotive did not exhibit even a branch of evergreen for decoration. Although the line is only a mile and a half in length, the scenery presented on either side is of very picturesque character. On the right are to be seen the majestic Mendip Hill, and Brent Knoll and to the left the range of the Quantocks, with intervening river, wood, and fertile fields. The station at Burnham is a neat brick edifice, commodious and comfortable looking. It is situated close to the beach and pier. When the first passengers arrived at Burnham, the hazy rainy atmosphere of the earlier morn had dispersed by the powerful rays of old Sol and the view from the terrace was exceedingly lovely. A large number of vessels which had been detained by unfavourable winds for several days were collected in the bay.

A race between three of them, The Sailor and The Charles, belonging to Captain Hunt, and The Marian, the property of Mr Symons of Bridgwater, was watched with considerable interest. The three ships were bound for the downs and it was decided that their power should be tested by rivalry in that distance some 500 miles. The Sailor held a slight lead as long as the vessels remained in sight. The Marion is an American built clipper and the other two are from the shipbuilding yard of Mr Gough of Crowpill. In addition to the agreeable Regatta incident the eye of the visitor was delighted with an inspection of the distant scenery.

From the Marine Hotel to the opposite side of the road were stretched a banner on which were inscribed the words ‘‘Welcome To Burnham’’. From the beach were perceivable flags and banners flying from the Pier Hotel, a monster flag hung across the street from the Clarence Hotel, flags, and banners surmounted the old lighthouse and baths, a blue ensign crowning the summit of the church tower, and a streamer of ensigns leading a grace to Trinity lighthouse. In Victoria Street a handsome string of silk banners spanned the road before Mr Avent’s  drapery warehouse on which appeared the following motto’s ‘‘ Queen, Lords and Commons’’ ; ‘‘Ships. Commerce and Colonies’’; ‘‘Trade and Agriculture’’; Queen and Constitution. In the same street flags were hoisted in places of the businesses of Mr Dare and Mr Board. In Oxford Street a decorative inscription leading extending across the road by the shop of Mr Penny exhibited the sentence ‘‘Prosperity To Burnham’’. In Regent Street there were several flags exhibited, and Allen’s Brewery adorned with gay banners in a tasteful manner. The entrance to their establishment from the Railway was especially admired by the visitors.  The Crown Commercial Inn was adorned with various sized pieces of bunting and a flag flutter in the breeze in front of the Liverpool Inn.   The inhabitants were in a state of high glee at the auspiciousness of the day for the inauguration of a concern so likely to tend to the progress of their pretty little town. The sun glided everything with his gladdening rays; the sweet bells of the parish church trilled with harmony in the air; and all things animate and inanimate bore a joyous aspect.

Shortly before 10 o’clock a goodly number of people prominent amongst whom was George Reed, Esq., to greet the passengers who were about to land on the  Iron Duke  steamer, which was rapidly seen approaching from Cardiff.  She steamed into the new basin gallantly amid cheers of the spectators; and notwithstanding the tide had ebbed out more than half way, she was able to land her passengers with ease and comfort a long distance from the bottom of the convenient stone-way Mr Reed assisted in towing her in and politely handed the ladies from her deck to terra firma. There were not more than 50 or 60 Cardiffians on board. The smallness of the number is attributable to rainy conditions when the vessel started. Those who did venture enjoyed an unruffled passage of two hours and would certainly experience an agreeable day at Burnham.  We must not omit to mention that the Bridgwater Railway – Carriage Band under the leadership of Mr Maby, of Bristol was located at the head of the Pier and played lively airs as soon as the steamer came within hearing and continued until she back out of the dock. Her arrival was also hailed by a salute of guns fired from the Pier Hotel.

A procession to meet an expected excursion train from Bristol and the Directors of the Somerset Central Railway Company was marshalled by George Reed, Esq., in front of the Clarence Hotel. It was headed by a number of banners, each carried by two men. On which were appropriate pictorial devices and inscriptions, the latter being ‘‘Commerce and Agriculture,’’ ‘‘Success to the Somerset Railway Company,’’ ‘‘Prosperity to the Bristol and Exeter Railway Co.,’’ ‘‘Railways and Agriculture,’’ ‘‘Where there’s a will there’s a way,’’ and ‘‘Reed Burnham’s Benefactor.’’ There follows , next the Bridgwater Band, George Reed, Esq., the Vicar, and most of the influential townsmen, the rear being brought up by the National School children, paraded the principal thoroughfares of the town,  the band playing most spiritedly and excellently.

Great disappointment was felt and experienced at the delay of the Bristol Excursion train which was announced to arrive at 11 o’clock but did not make its appearance until past one. To wait for this was out of the question; therefore as soon as the Somerset Railway Directors came, the cavalcade was reformed and walked the entire length of the pier, and through the streets of the town.

During the afternoon and evening the Bridgwater Band played on the esplanade, and the visitors who were numerous, either listened to their entertaining strains or amused themselves in other and perhaps more questionable ways. Donkey racing amused some, boat –rowing gratified others; climbing greased poles for legs of mutton and jumping in sacks administered to the enjoyment of many; while giving ear to ballad- singers , sauntering along the fine beach and inspiring the health giving breeze from the channel diverted but not a few.

A company attendance of about eighty persons attended the Celebration dinner at the Clarence Hotel held at two o’clock…………The Chairman proposed ‘‘Prosperity to the trade of Burnham and Highbridge,’’ connected as they now were by railway and pier. He had watched the progress of the pier with deep interest; and he congratulated them upon its completion. He felt that in proposing a toast of that sort he should not be doing his duty without connecting with his friend George Reed  Esq, (loud cheers) – whose absence from this festive board, he regretted to say was occasioned by a severe domestic bereavement. There was no individual to whom Burnham owed so much, and he had thrown the whole energy of his nature of the work they had to meet to celebrate this inauguration- (applause). The aspect of the present meeting was encouraging, and, he gave with all heartiness ‘‘The Health of George Reed Esq.,’’ and prosperity to Burnham and Highbridge.

The photo at the top of the page is from Summer 1885, which is the earliest picture of the railway we have.