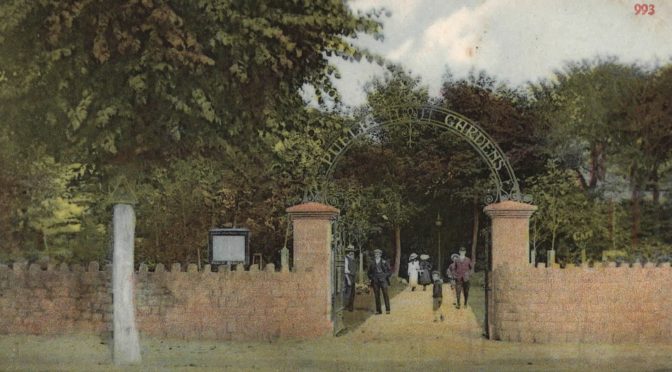 The Manor House and Gardens (See Heritage Trail point 16) were originally built and laid out by George Reed. 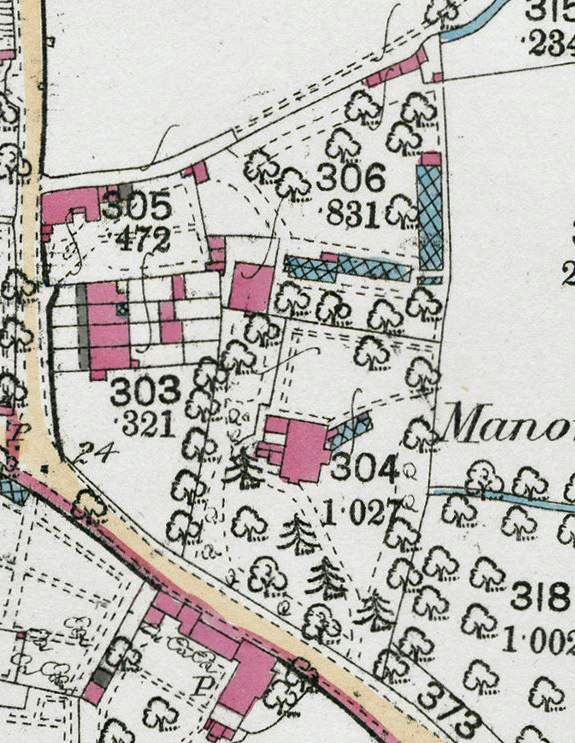 The extent of the glasshouses in which George Reed grew his prize orchids, amongst other things, can clearly be seen in cross-hatched blue.

The Bridgwater mercury reported in 1859: 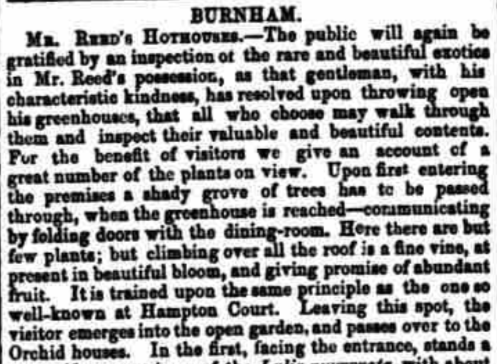 The Bodgers were a famous English family of seed growers who eventually emigrated to the U.S. ‘John Bodger and Son’ Seed Company of California, which grew into one of the largest flower seed suppliers in the States. Before John and his son emigrated they were employed as gardeners at the Manor. This was after George Reed’s time. During the 1890’s they had a shop in College St. 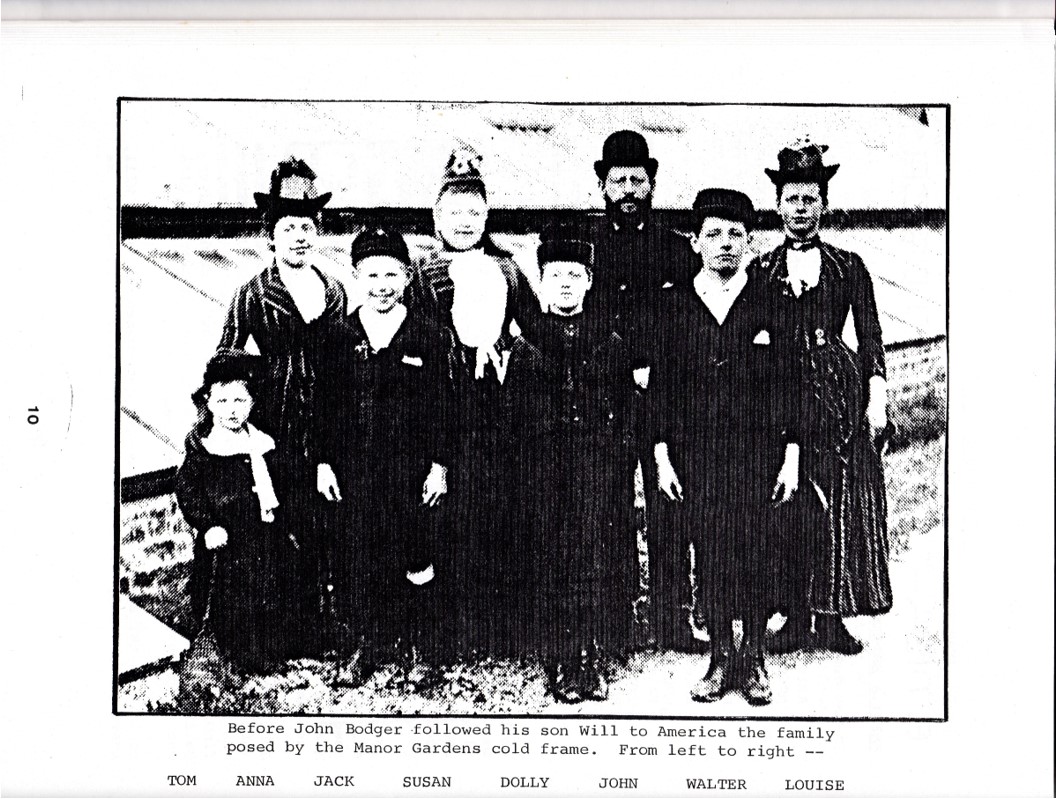 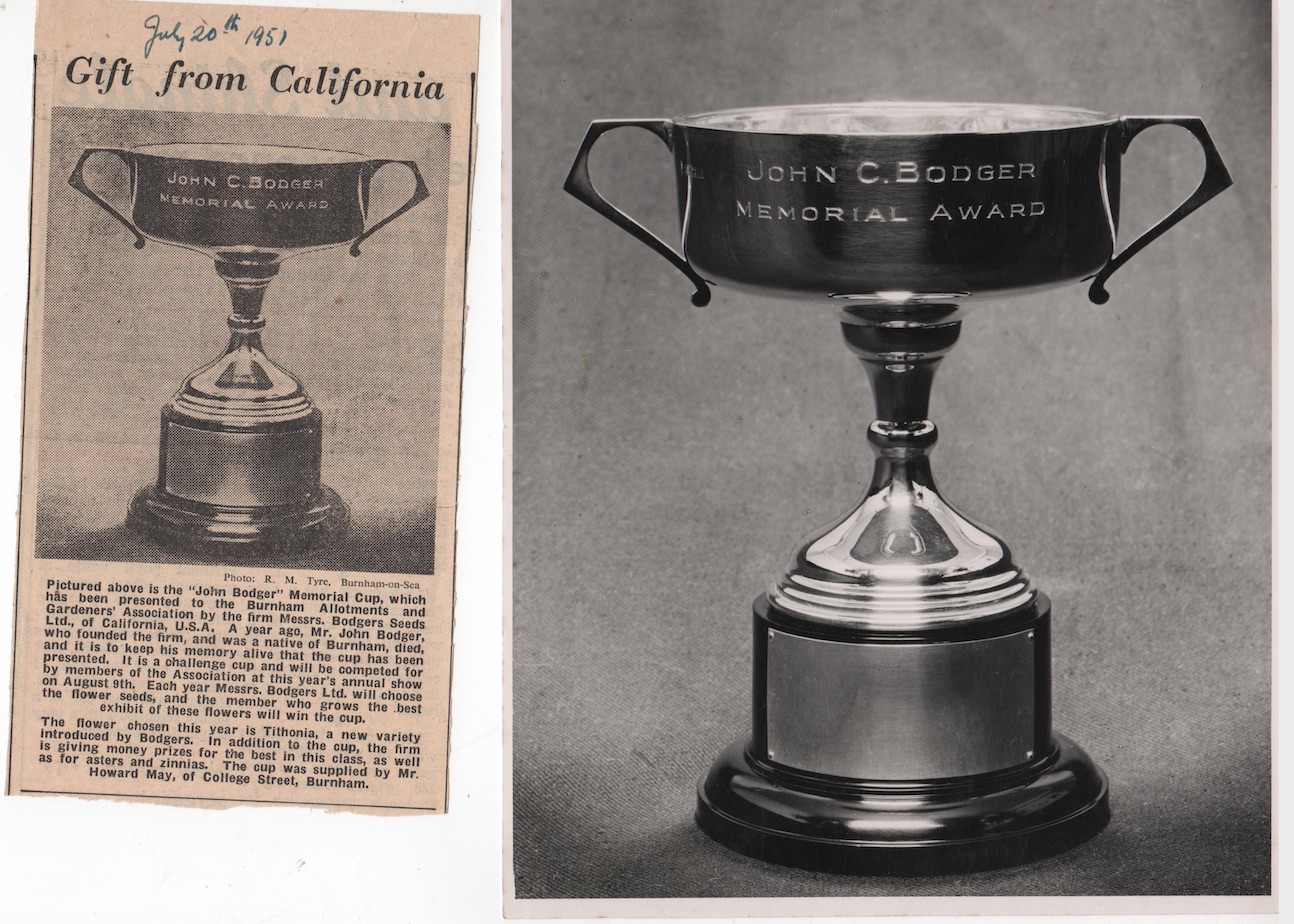 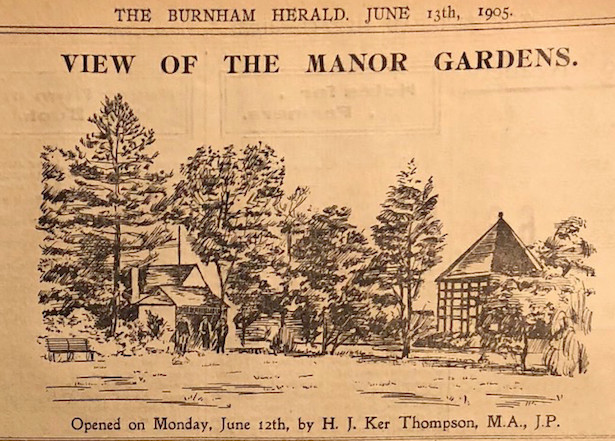 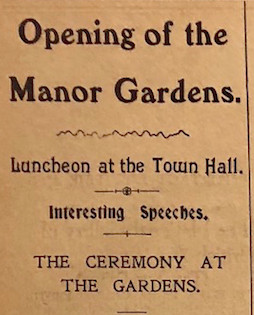 Map below is from o.s. 1921-43 and shows changes made for the public gardens including new west entrance , bandstand and paths. 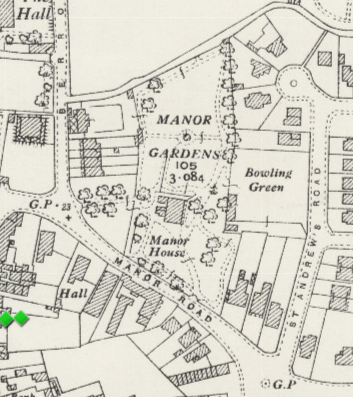 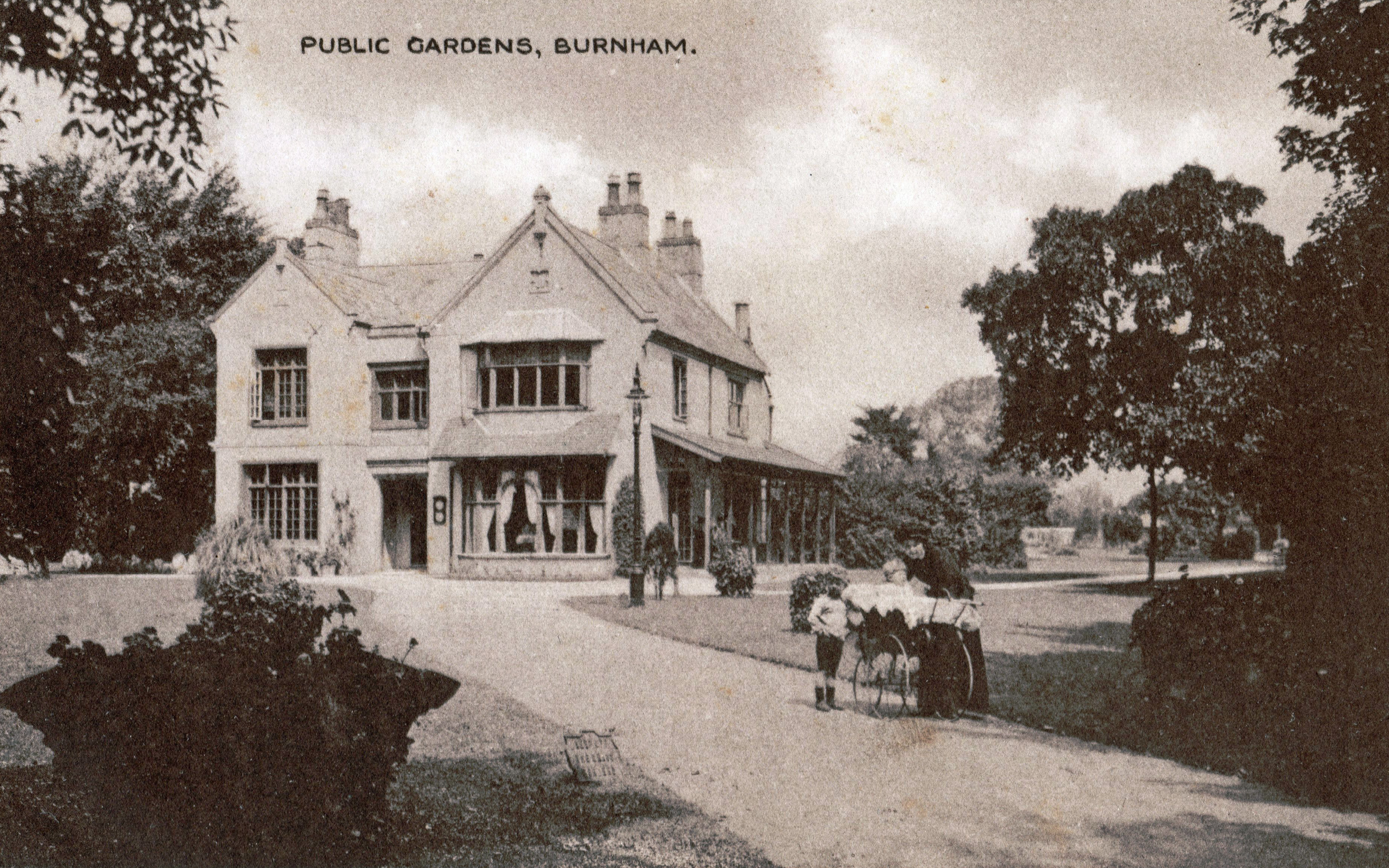 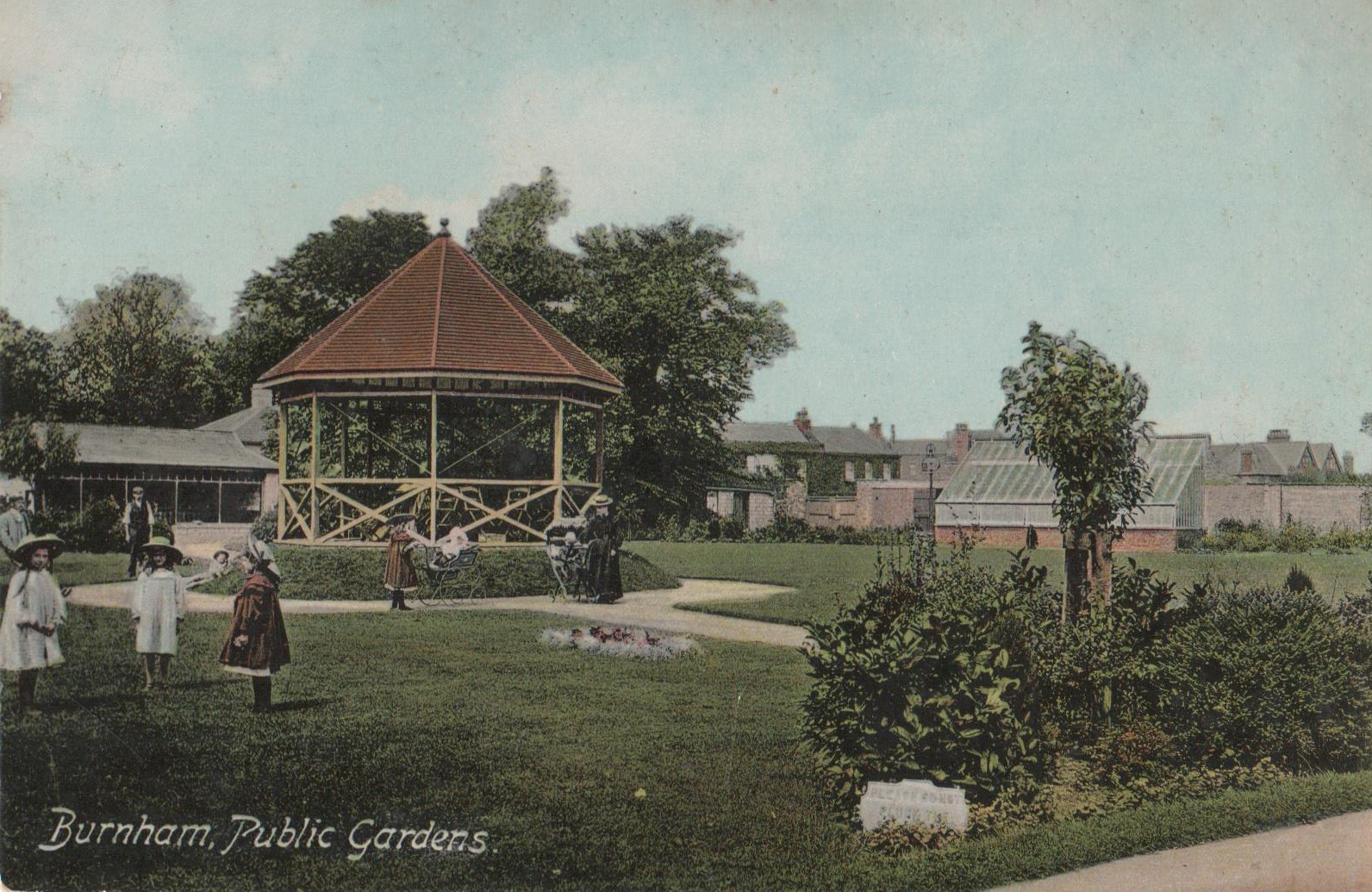 Judging by the costumes the photo above was probably taken not long after the opening to the public. Some of the glasshouses remain. The shelter, which many will remember, can also be seen in the background. The bandstand has since been replaced. 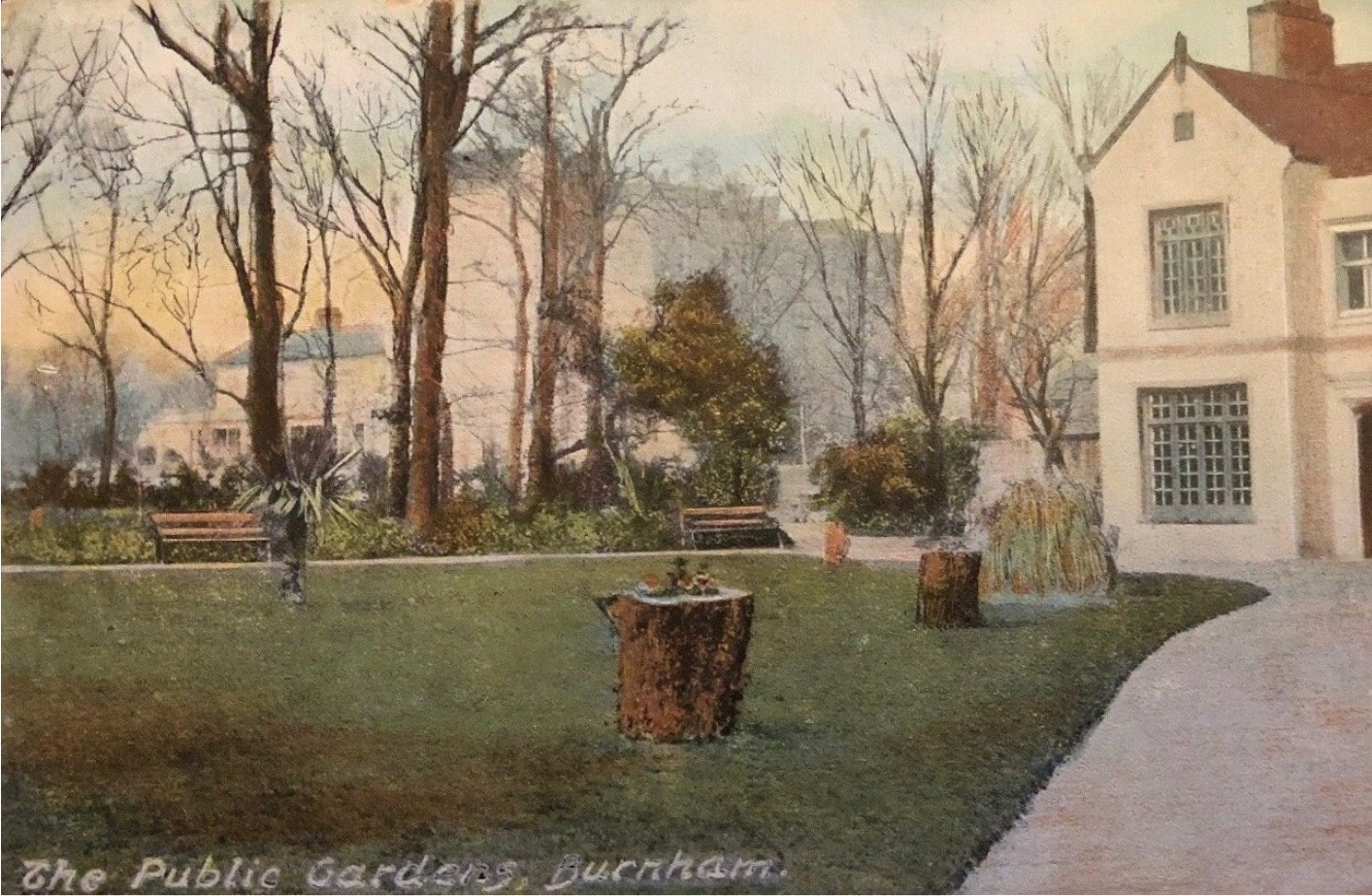 Above: early coloured card in which Brunswick Terrace (303 on O.S. map above) can be seen in background. This terrace was constructed sometime during the early part of the 19th century by John Adams next to Brunswick Cottage (305), which stood on the site of the later open air theatre (see below). It was initially known as Brunswick Place. 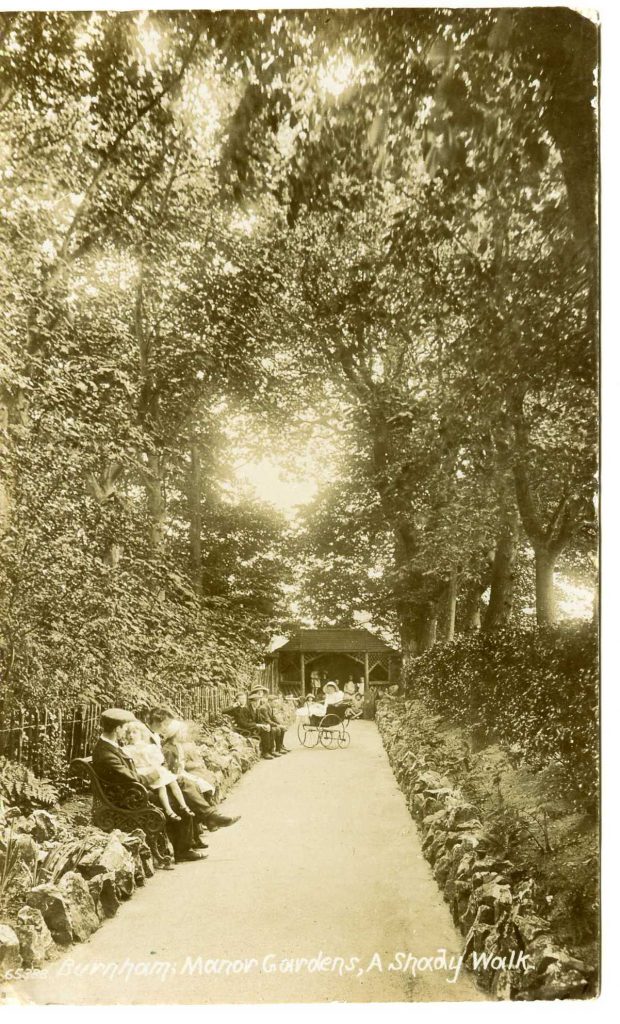 The  location of the above photo is something of a mystery. One theory is that it may have been reversed (i.e. benches really to the right) and that it could have been along the western boundary of the gardens behind Brunswick Terrace, before the new shelter was built. The photo below shows a later view of that area. However although the arrangement of benches and stone walls is similar, the position of the old trees relative to walls & benches does not seem right.  Alternatively the mystery picture could have been the south end of that path, running towards a dead end at Manor Road, opposite the Church Hall,  before that road was widened. In either case it was possibly the remains of the drive from Manor Road to what may have been the Manor stables / coach house (see top map). 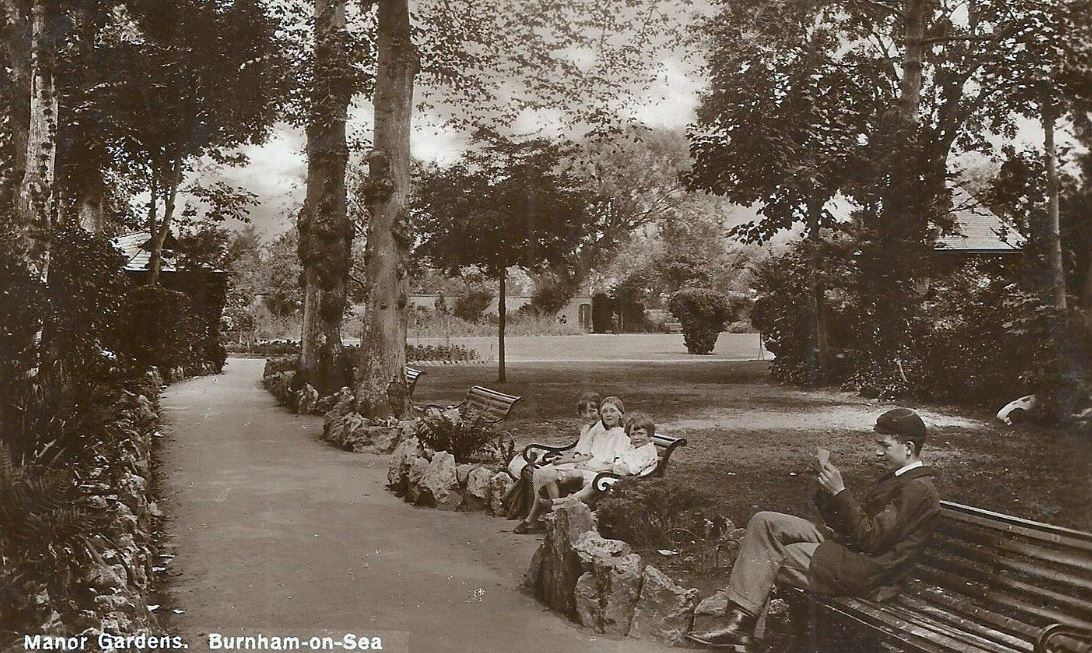 Some parts of the gardens were  quite woody as can be seen from the photo at the top of the page, which is of the entrance opposite the Church (photo below). This entrance was not original but presumably created for the public opening. Unfortunately the ornate entryway is long gone. 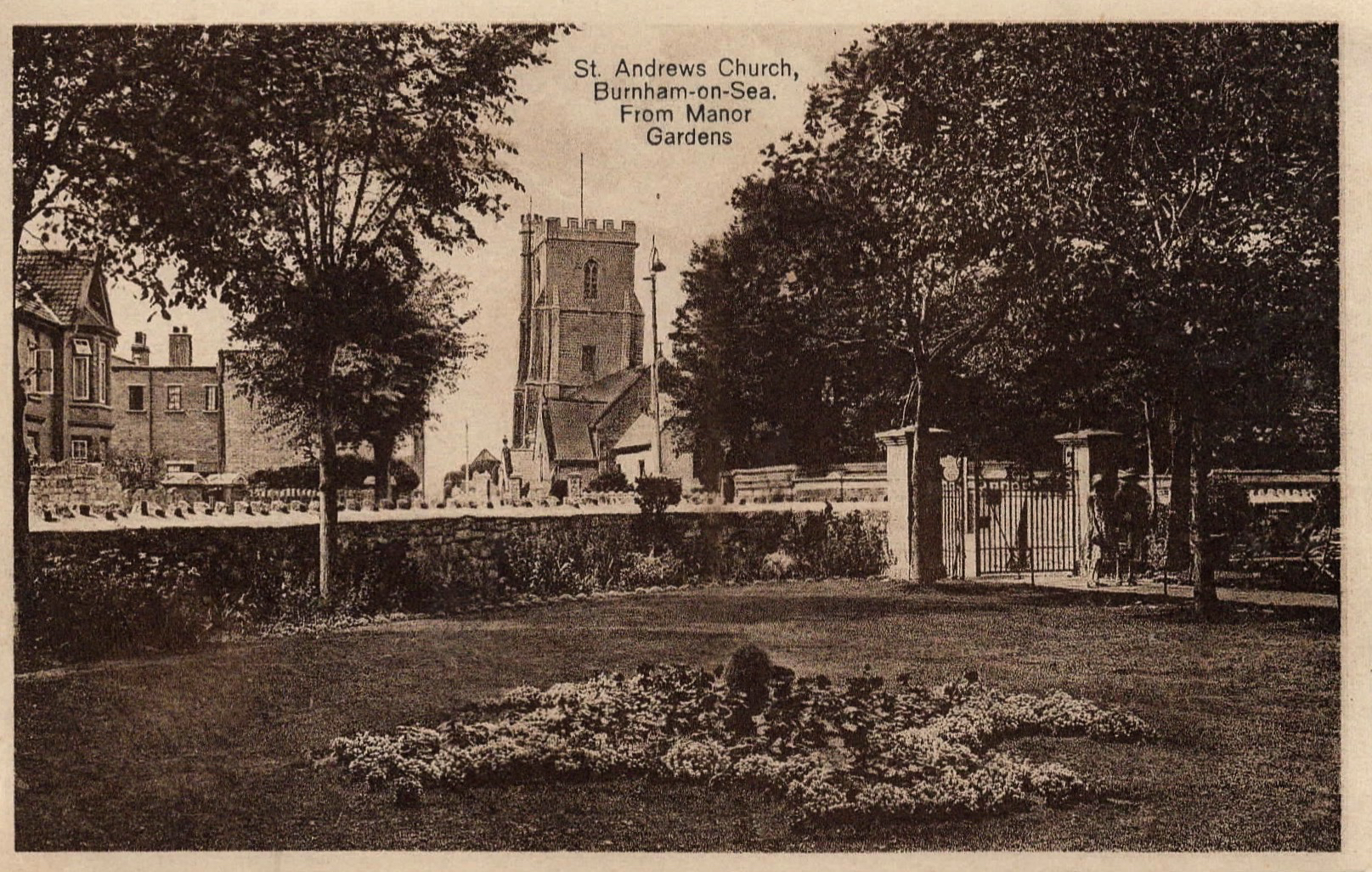 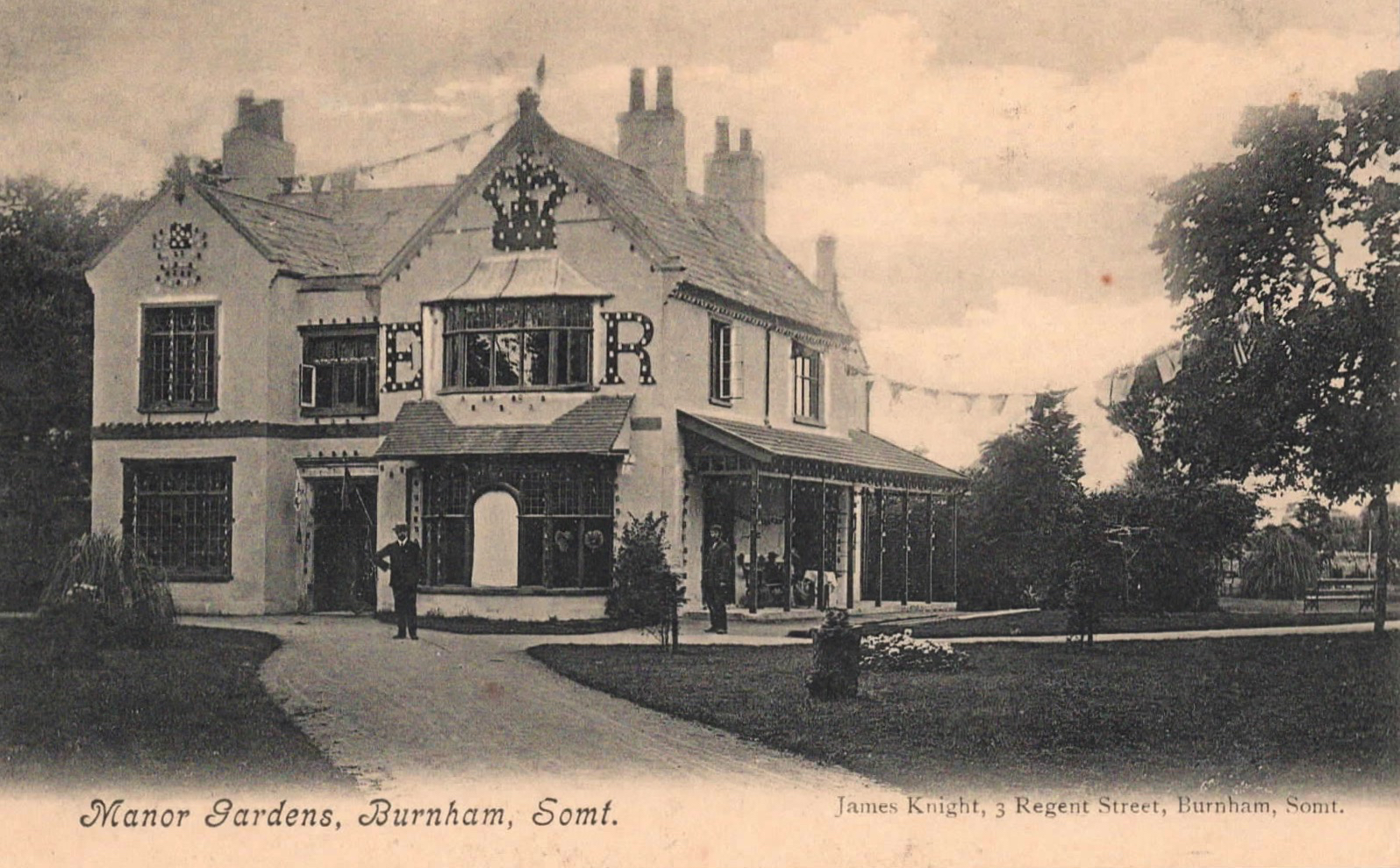 Above: house decorated for the coronation of Edward VII.

At one time an open air stage existed,  on the site of the old Brunswick Cottage at the back of Brunswick Terrace, with seating on what is now the vet’s car park. Various performances were put on here during the summer seasons. 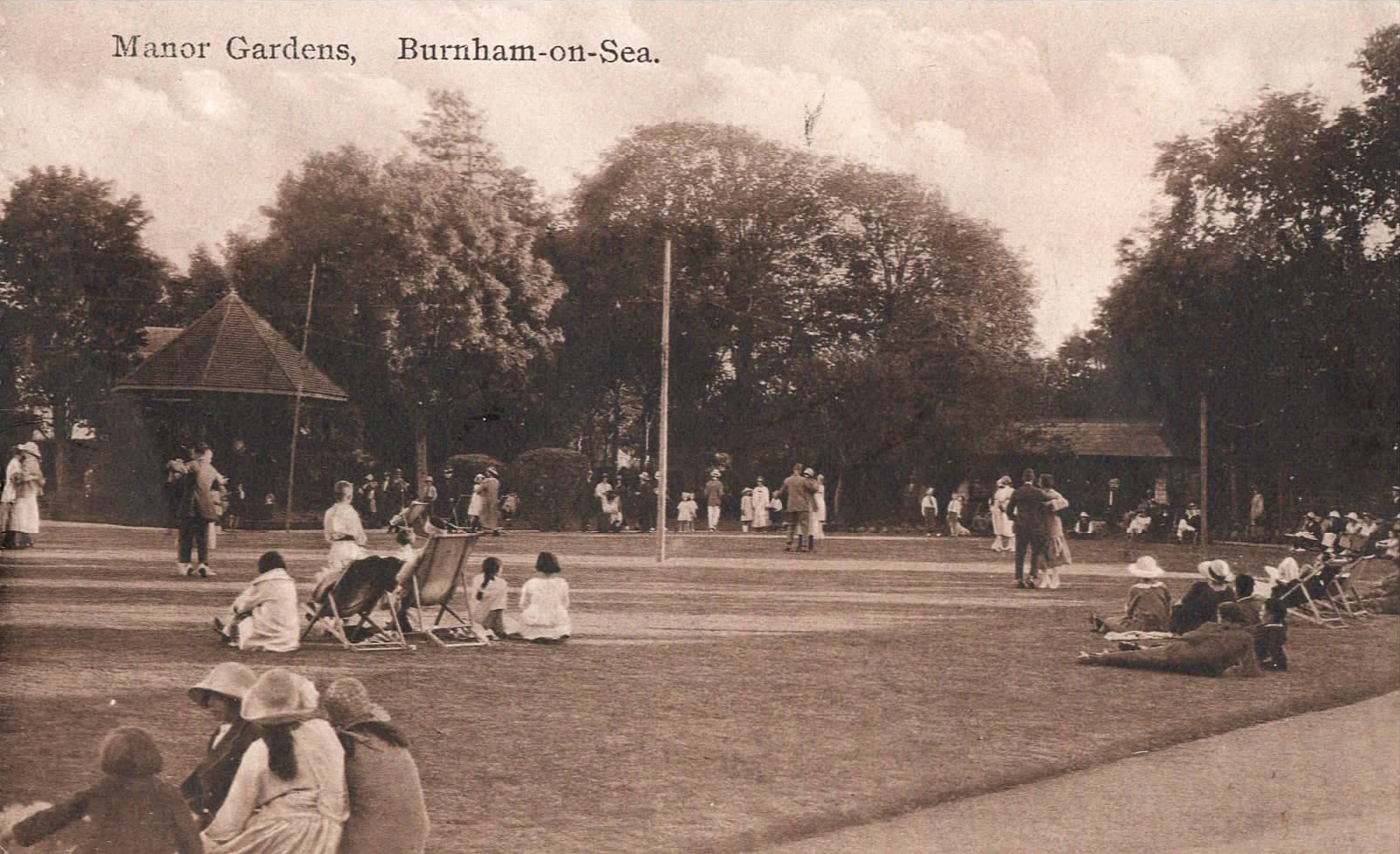 On the above postcard people can be seen dancing so it is likely that a band concert was underway. 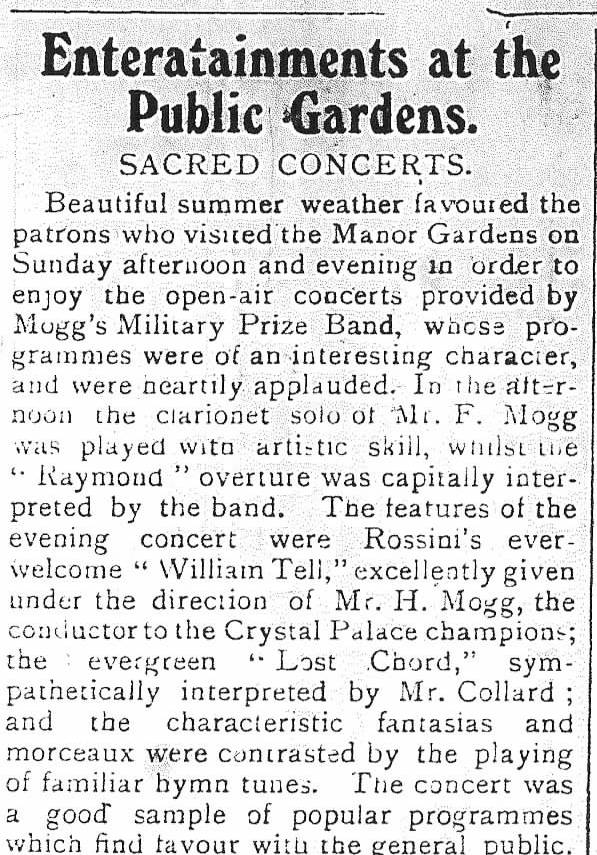