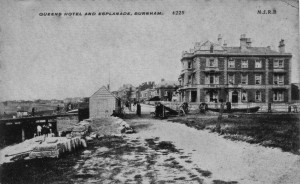 Built by leading Burnham developer George Reed in the late 1850‘s, as part of the scheme of the Burnham Tidal Harbour & Railway Co,  the hotel opened its doors in April  1860 under proprietorship of John Gofton. 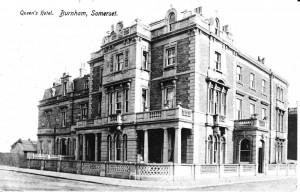 Due to the vagaries of the tourist trade in the 1870’s The Reed’s Arms closed for 8-9 years before reopening in 1884 under The name of ‘The Queens Hotel’ when Mrs. Worlock was the proprietress and advertised that hot and cold sea water baths could be taken which residents could use ‘free of charge’.

An advertisement in 1908 states it is the headquarters of The Golf Club , has livery stables and gives Mrs. Dening as the proprietress.

It is only in recent times the name has quite rightly reverted to The Reeds Arms.

A short extract marking Coronation celebrations in Burnham-on-Sea in 1936.  It was filmed by local amateur cinematographer Norman Gobey on 9.5mm.

Discover the next location on the trail: 4. The Jetty.

Discover more about The Reed’s Arms