In the early 20th century Mrs Dupuis wrote a retrospective account of the life of her husband Rev. Theodore Crane Dupuis and included a number of press clippings and other preserved items. The account is handwritten and not always easy to decipher. The extracts below are reproduced as they appear. ([?] indicates unclear.

1. The History of the Church

A clipping from an unidentified source gives an account of the understanding of the history of the Church in 1864: 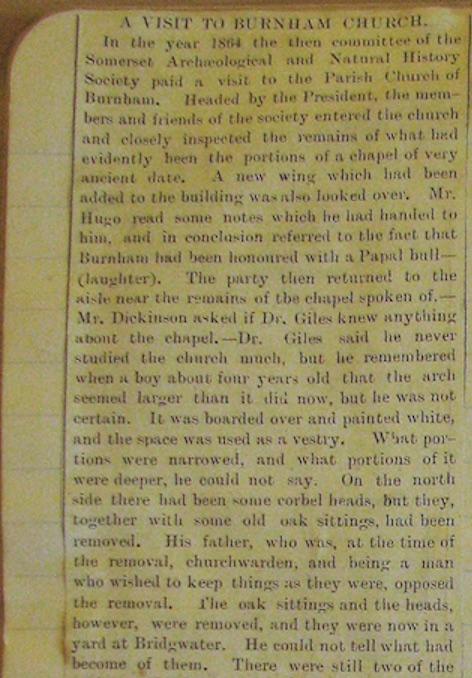 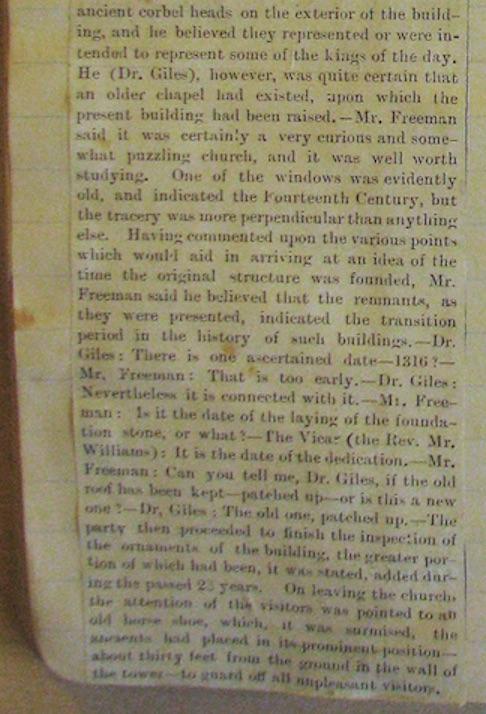 “1867. The Church was blocked with unsightly high pews. The East Window blocked with the “Altar piece”. The panels of the ceiling had painted paper devices, pasted on, & occasionally falling. The West End was blocked with a loft & organ, fronted by [running?] curtains. The Choir, a few men and women sat there (Mrs Gunter, Mrs Chadwick, Emma Parsons, Mrs Bawden, & Geo Chas Hardwick . Old Tucker).”

“There was no means of heating & never had been. People objected saying that the vaults under the Church were full of water & it would boil.”

“1870 Mr Cluny of Middle Burnham, a  likeness of Sir Robert Peel, gave great trouble by opposing the warming of the Church. That measure like many others in the early days of Burnham was carried with great difficulty.”

“1877. This year Mr [Christian?] surveyed the Church and proposed plans for restoration. In consequence there was rather a stormy meeting in Vestry. Old lawyer Hobbs not having been consulted, was indignant. Theodore who was going to give £800 to the Church, told the meeting that he would find another Church to give it to if they would not have it here…….However the plans were almost unanimously  [???] & Theodore had many supporters. After this subscriptions were [received?]. Mr John Board very energetic with [Cards?] and other devices, there were several bazaars.”

“1878. The North Aisle was not touched. The work began in 78 and was completed about [Midsummer?] same year as far as was then done. The opening was very successful….the Choir of Wells Cathedral came to the opening…..Theodore feasted them. They gave a concert in the evening but expenses swallowed up receipts. Theodore’s first great success – & cost him so much.”

Cover of Parochial Magazine and sample of articles from an issue of 1877, mentioning the renovation work. 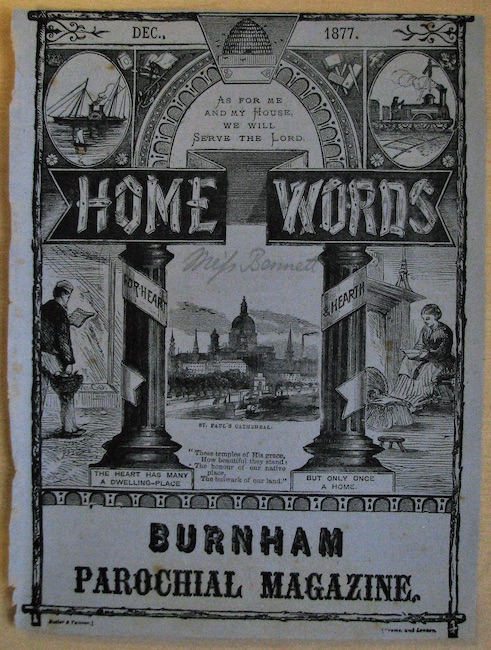 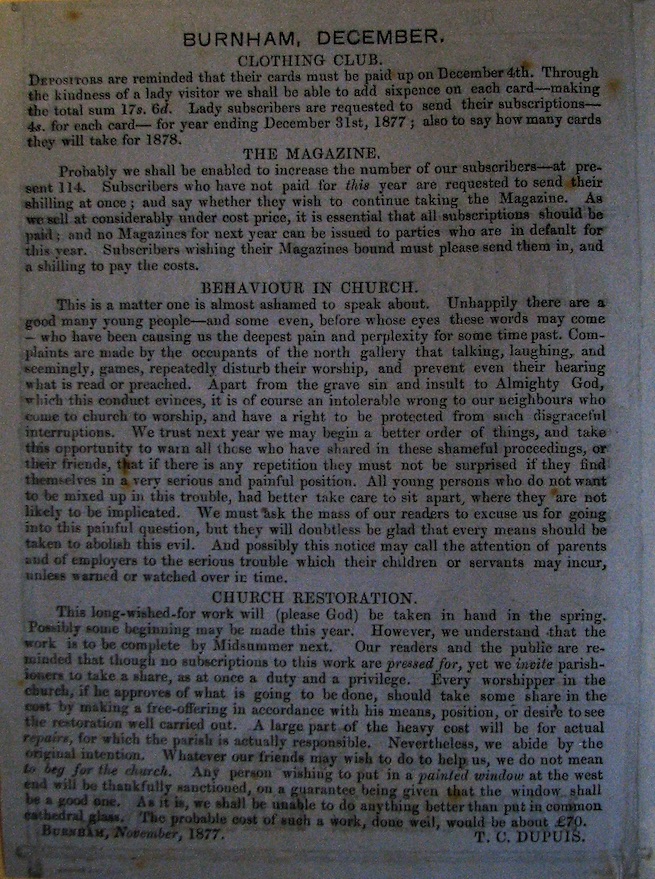 An account by Rev Dupuis of the completion of renovations, in a Parochial Magazine  of 1878: 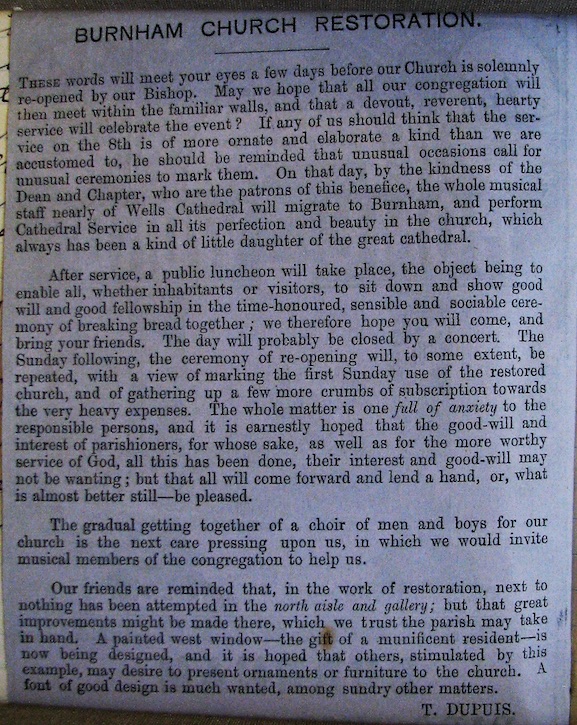 From the Parochial Magazine: 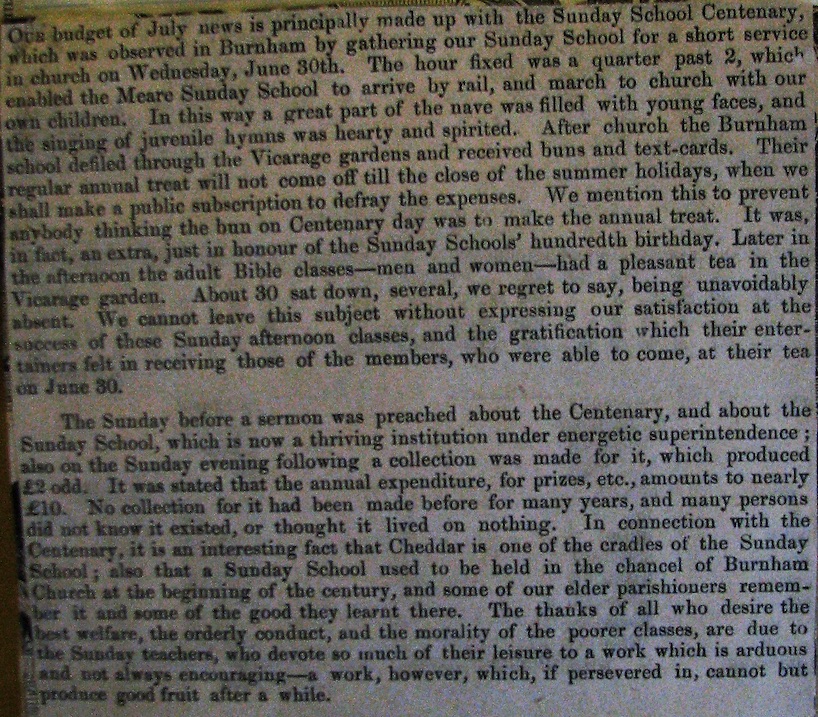 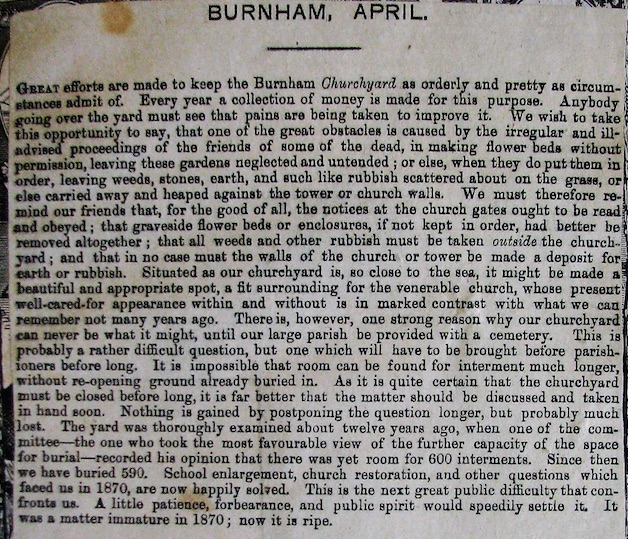 “The principal Church work of this year was the preparing for and the purchase of a new organ & the opening of the same. The new organ & [Cele?] were to swallow up old vestry in a building of sufficient heighth [sic] to hold the 16 ft. stop. Permission was had from the Ecclesiastical Commissioners to open a great hole in the Chancel wall, from floor to wall plate – providing strong bearing beams & side masonry. All massive. Meantime the organ was ordered of Vowles of Bristol £315.  £500 was spent this year on the Church. This could not have been undertaken had it not been started by the action of Mrs Walter Board….the dear old lady offered to lend £100 for the organ and not to be particular as to re-payment.” [at Julia’s suggestion: “we shall hear your voice in the organ”, she actually gave  the money ]. “The rood stair was opened into the Nave as an inlet for sound. …..The Committee determined to lay out on a more expensive type of organ than that originally intended- on the expectation of additional support. The old organ was sold, through the agency of Mrs Henry King – to a dissenting chapel in Wales. It had been built by Beale of Bridgwater.”

From the Parochial Magazine: 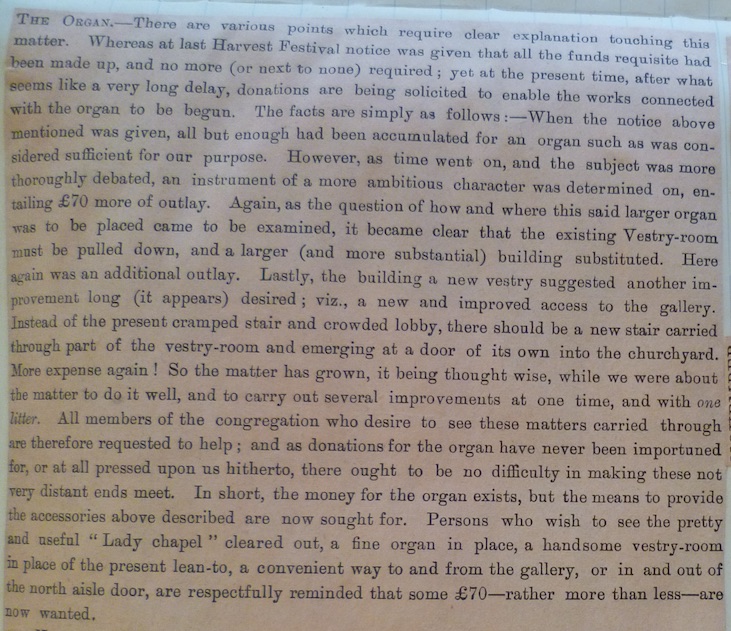 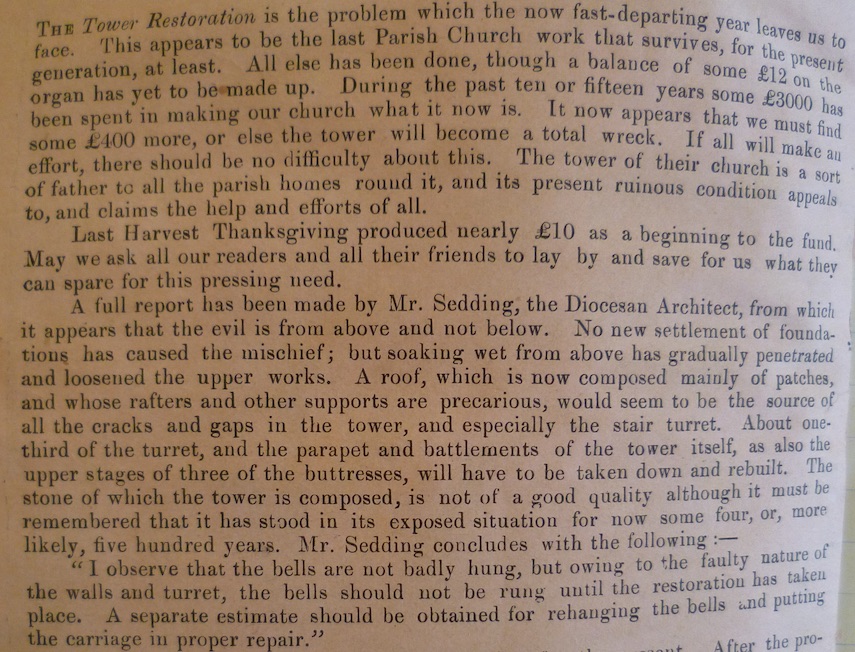 By the turn of the 20th century the bell cage was in a dilapidated and dangerous condition so a fundraising drive was commenced to repair or replace.

Numerous events were held including this organ recital: 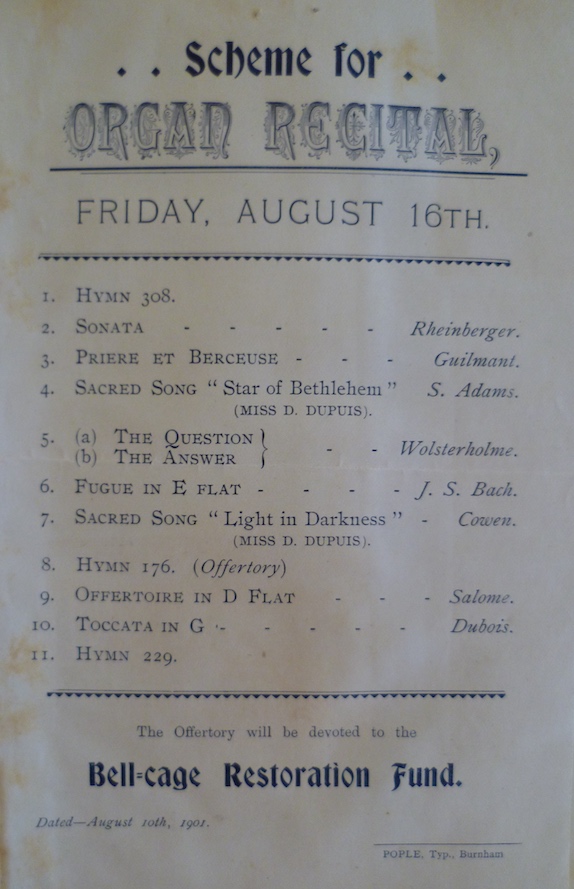 Press report from1902 about the previous history of the bells: 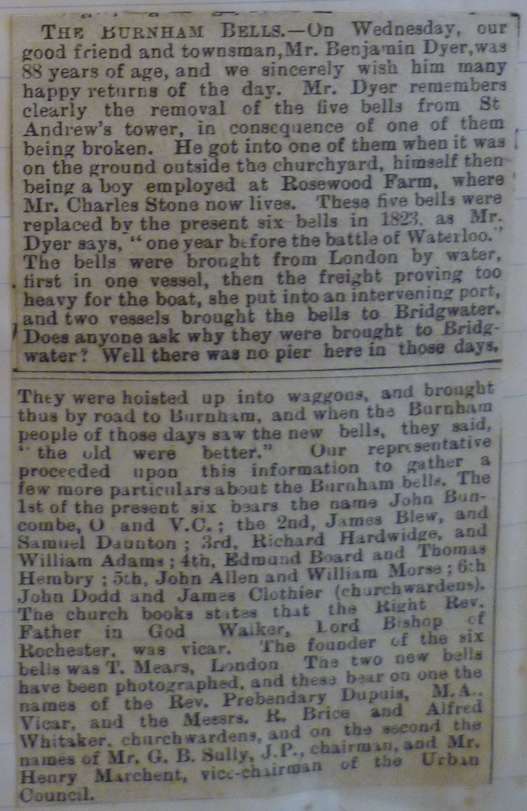 Once the work had been completed in 1902 a celebratory dinner was held: 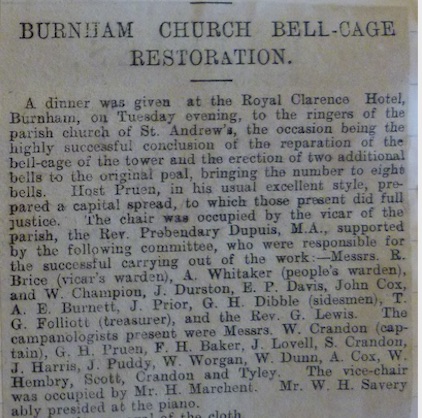 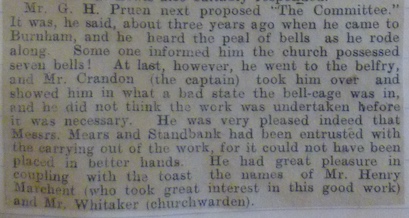 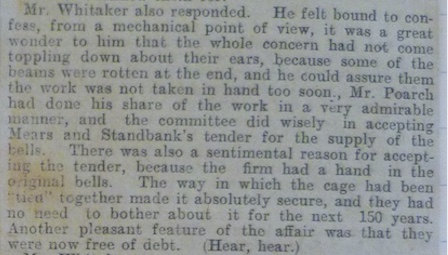 The bell ringers were not forgotten: 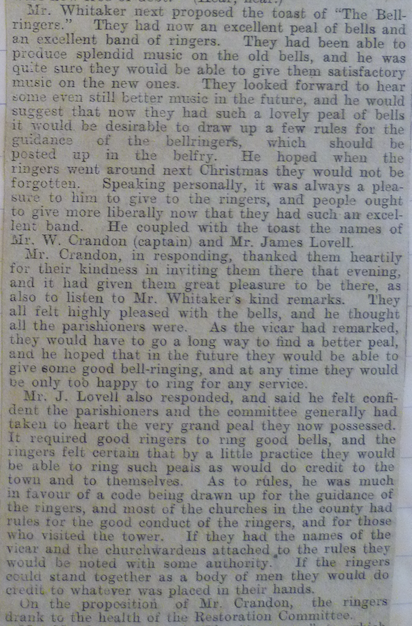 A service of dedication was also held: 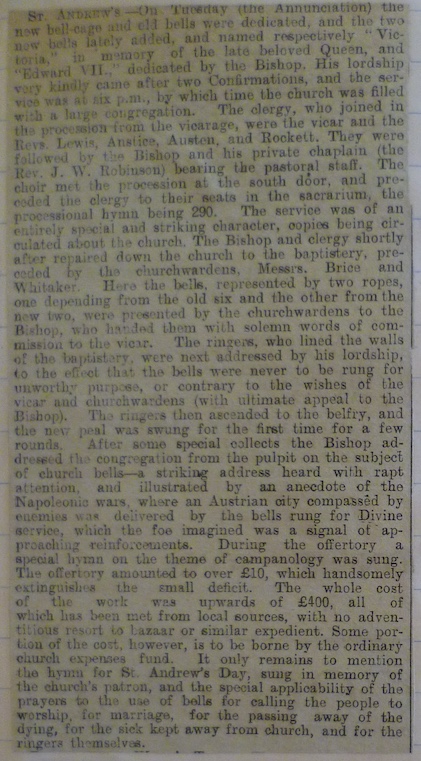 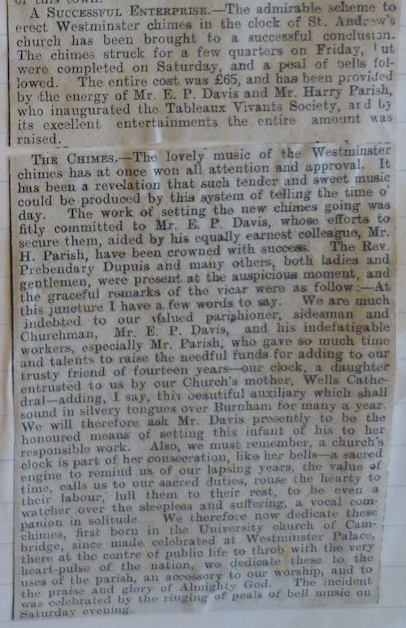 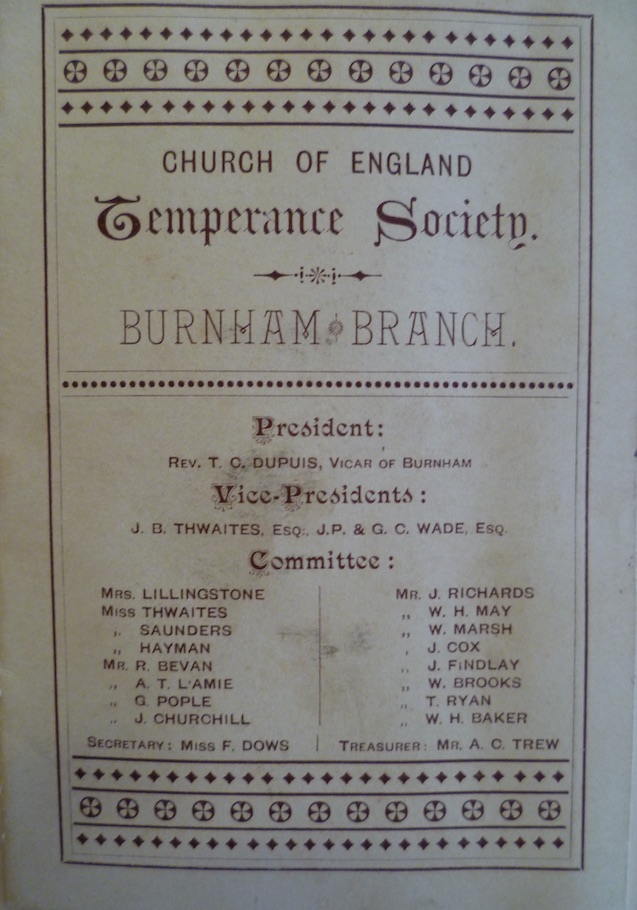 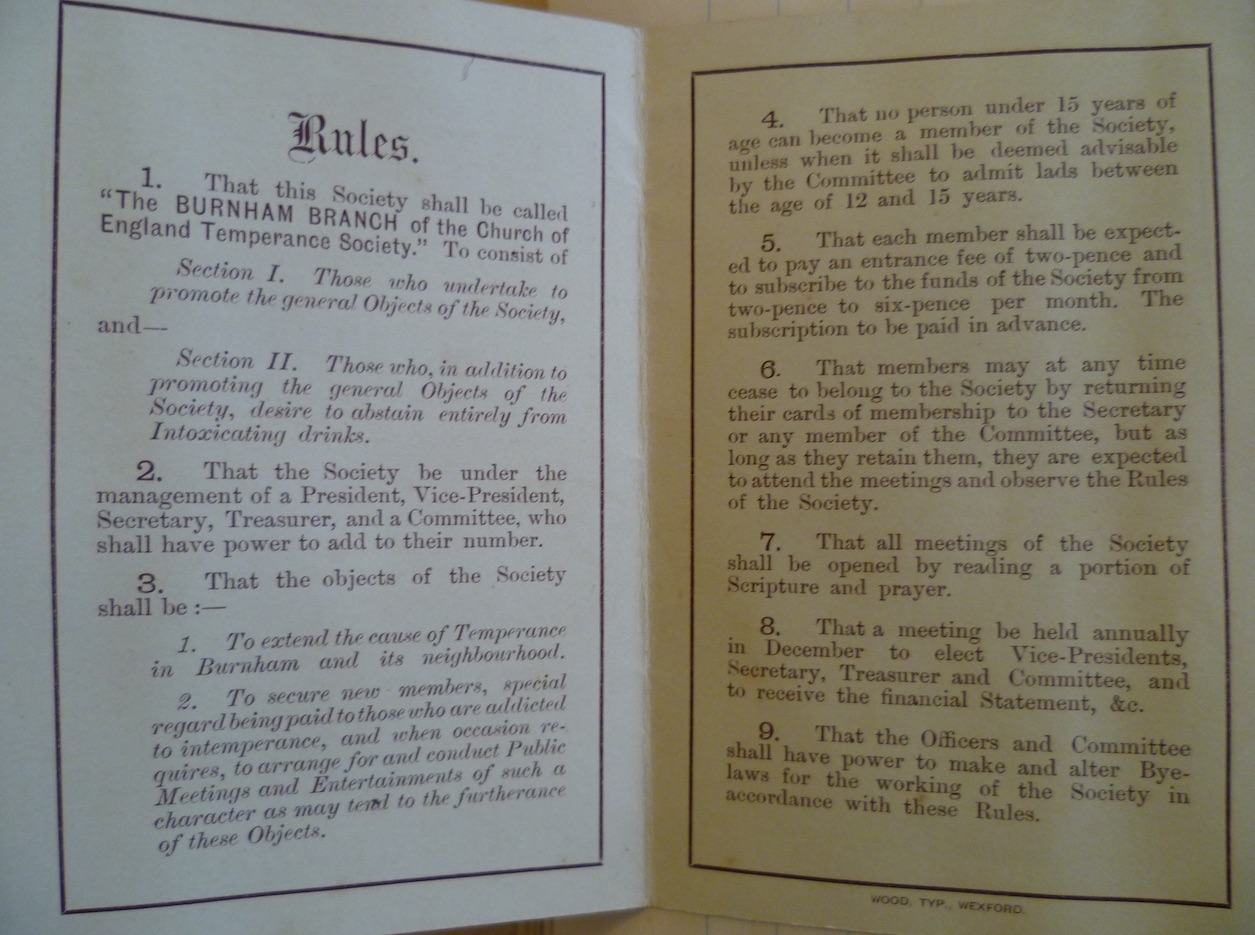 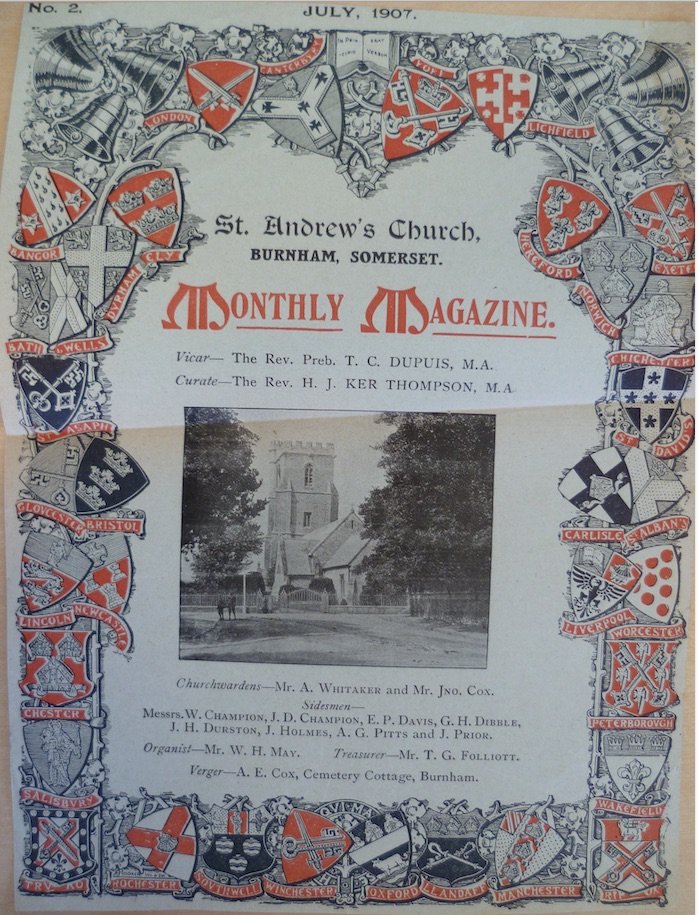 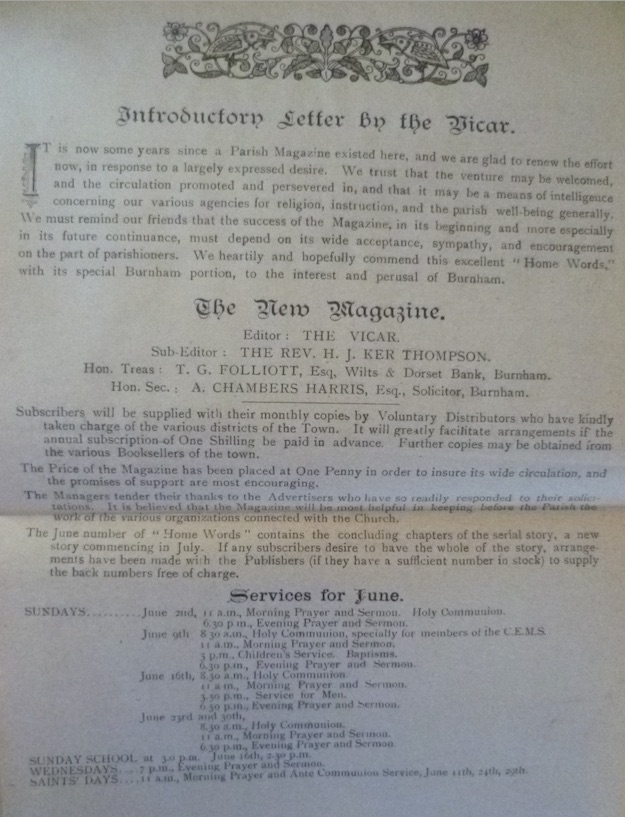 Scans courtesy of Brian Marchent whose baptism is registered on the final page. 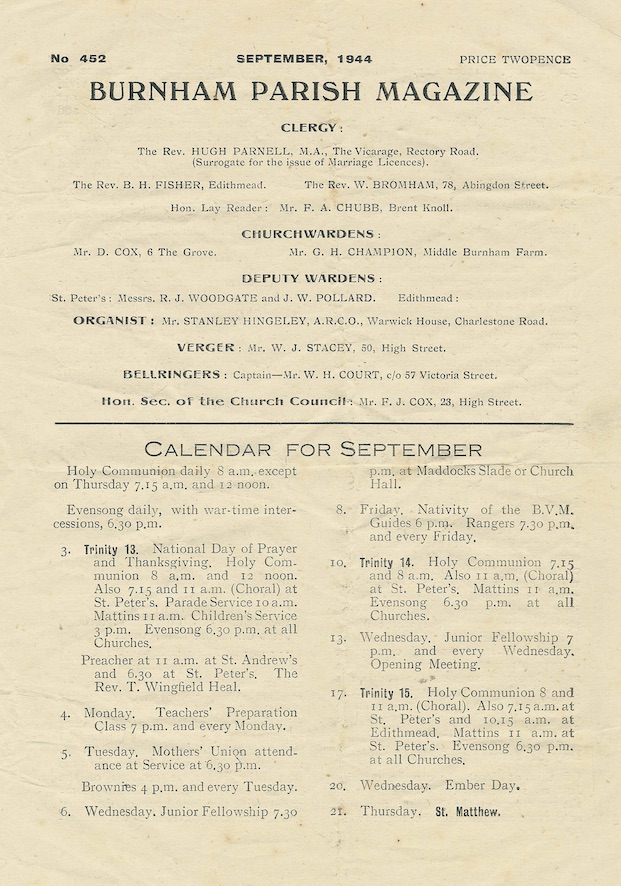 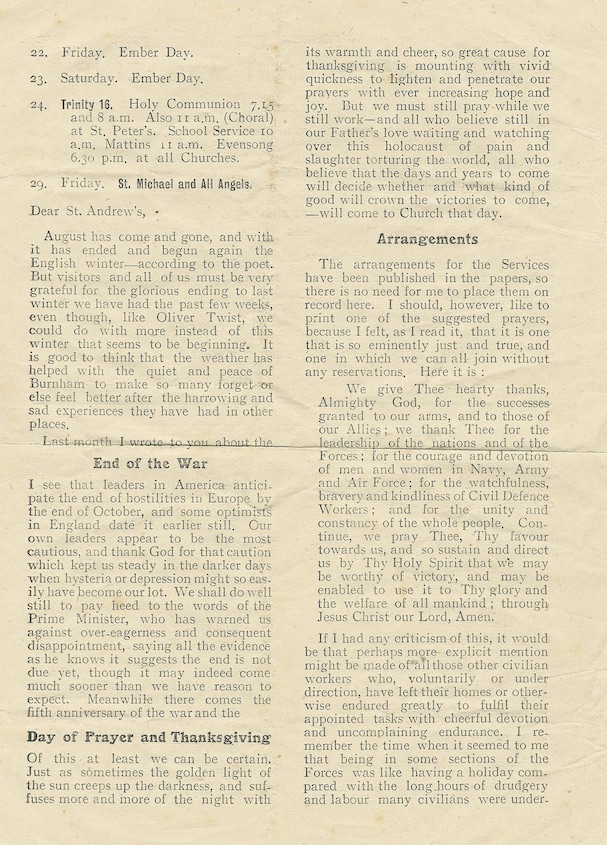 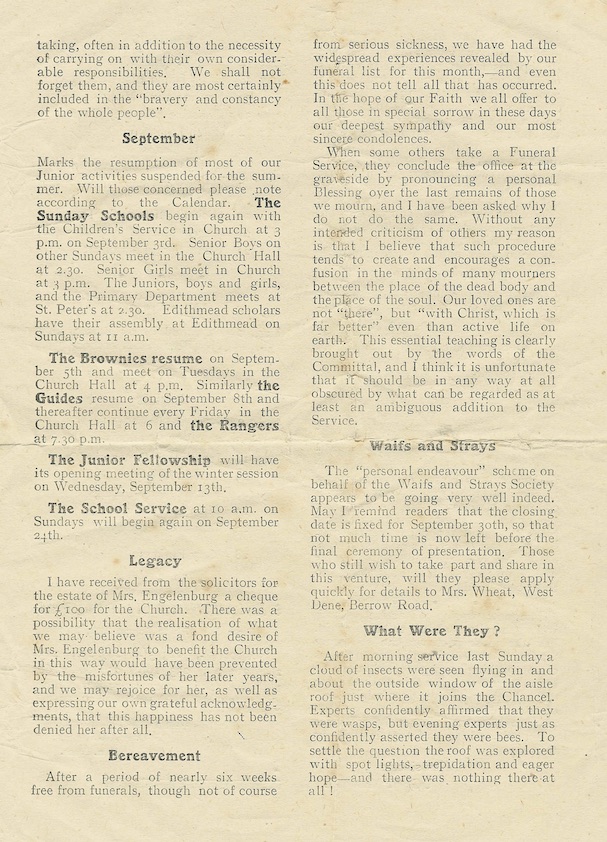 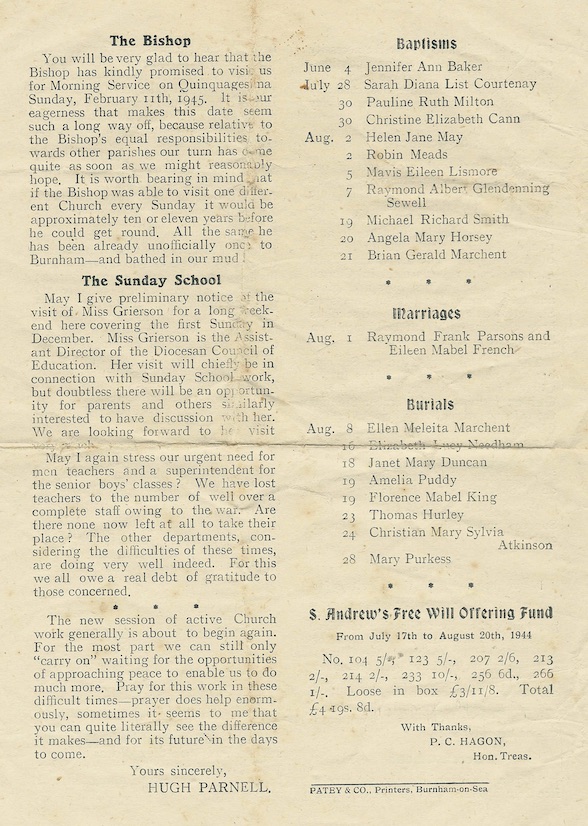 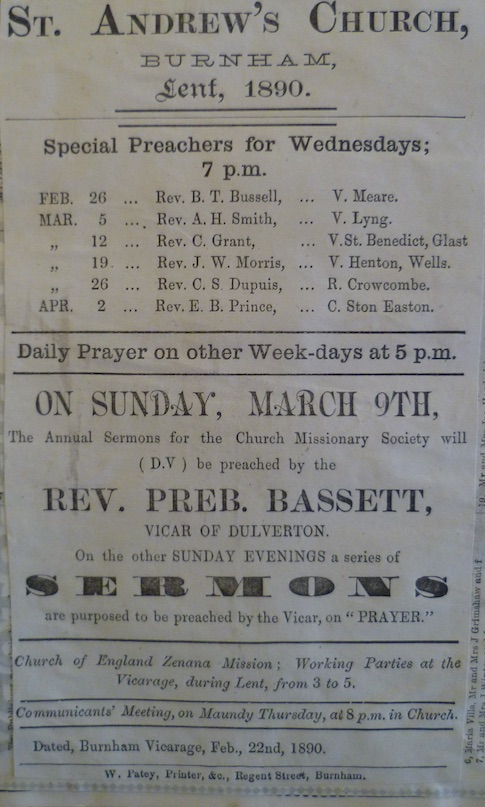