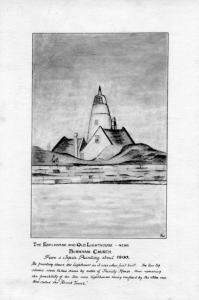 How the care of local shipping passed from a fisherman’s wife, to the local curate and then to Trinity House, leaving the curate with the capital to develop Burnham’s spa.

In around 1750 a fisherman and his wife lived in a cottage close to the church.  One stormy night, so the story goes, anxious about her husband not returning home after dark the wife put a candle in the window of the cottage to help him find his way home.  It saved his life and grateful sailors decided to pay her small sums of money from that time on to keep a candle burning in order to guide them safely on their homeward journeys.  Later the sexton of the church gave the fisherman’s wife five pounds for the rights to place a light on the church tower,  it being higher and therefore more effective (the original light was not adequate for larger trading vessels bound for Bridgwater).  He, in turn, was given twenty pounds for the rights by the Reverend David Davies, Curate of Burnham, who built the structure now known as the Round Tower to replace the church light.

The Round Tower was built onto to the Curate’s cottage by 1800 (evidence for this is a picture of the lighthouse painted 1800).  It was a circular brick building, attached to the Reverend Davies’ house, from which an open fire light was exhibited.

Local merchants and ship owners began contributing to maintain the light but by 1813 the arrangement ran into difficulties and the Rev. Davies successfully appealed to Trinity House for a grant and permission to levy dues because the “£135 annual income” was insufficient to maintain an effective light.  Trinity House granted Rev. Davies a license and a 100 year lease.  The Rev. Davies was then entitled to collect dues of 3/- (15 pence) from coasting vessels, 5/- (25 pence) from British ships and 10/- (50 pence) from foreign ones.  At that time the port at Bridgwater was flourishing and the number of ships entering the River Parrett increased from 600 per annum at the beginning of the century to 2,000 per annum by 1832.

According to information in the archive of local historian Samuel Nash “Legend has it that the Round Tower…..once figured in the smuggling trade and was linked by an underground passage below the old churchyard with an exit in Victoria St. No trace of this passage, however, has ever been foound.”

An article in the bath Chronicle on 22nd February 1816  reports:

“Burnham Light. – An alteration is about to take place in the mode of exhibiting the Burnham Light, with a view to make it easily and clearly distinguishable from the on the Holmes, viz. by obscuring the light every alternate half minute, by an ingenious piece of mechanism, the invention of Mr A. Rich, watchmaker, of Bridgewater (sic).”

In Doctor Henning’s book he records ‘the navigation of the confluence of the rivers Parrett and the Brue was extremely dangerous due to the shifting sands and the want of a beacon.  In 1800 Shipwrecks and subsequent drownings were frequent.  If an estimate was to be made of the lives saved over a thirty year period since the lighthouse was erected the persons saved from drowning would be approximately seven hundred’.

The light continued to operate from the Round Tower until 1832.  One historical source states that the top two storeys were then removed and the roof castellated so that it would not be confused with the new Burnham High Lighthouse. Pictures showing this can be found here.

The lower part of the structure now forms  part of the ‘Round Tower Guest House’ and is clearly visible from both the Churchyard and the Esplanade. The  guesthouse building as it exists currently is constructed around the base of the lighthouse and its original adjoining cottages, with a newer frontage and extensions.

Discover the next location on the trail: 12. Steart House