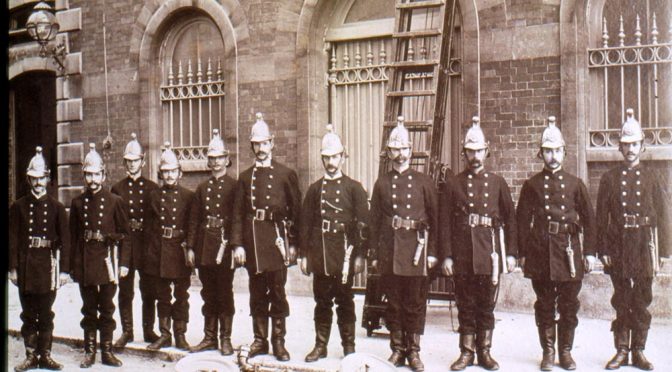 As yet we have few details about the Burnham Fire service. The picture at the top of the page and the five below have no names  attached to them. 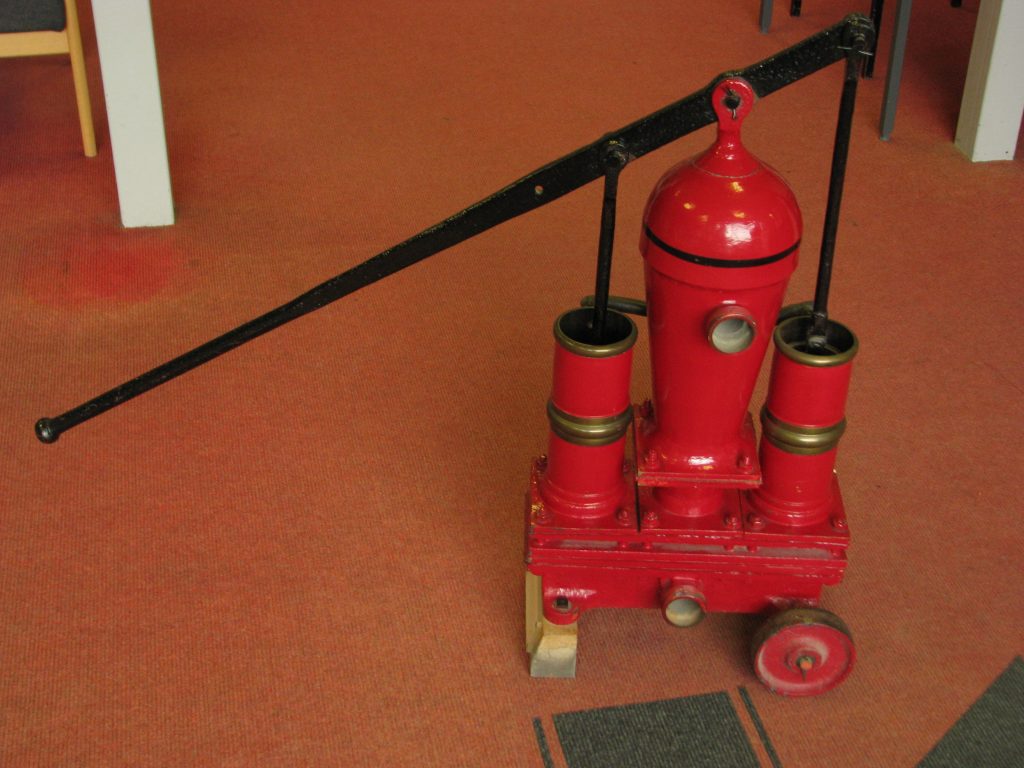 The Princess Hall was originally constructed in 1868-69 as a market hall and town hall.  Originally it is believed the east end was open to the street for access to the market.  At some point this end was enclosed (see Princess St) and it  was developed for use as a fire station. From the picture at the top of the page it can be seen that this occurred some time  before the installation of the folding doors  (below) which many of us will remember. 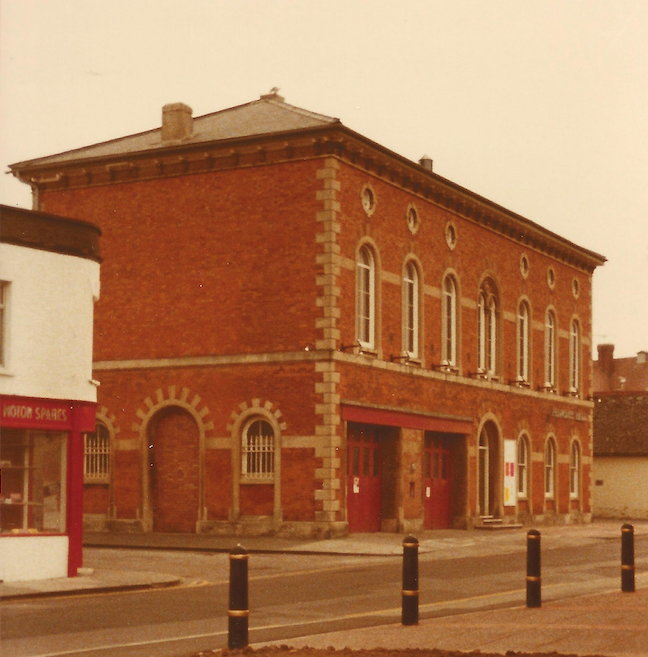 In 1913 there was a large fire at Pople’s builders yard in the centre of Burnham Town behind the High St premises now occupied by Boot’s . 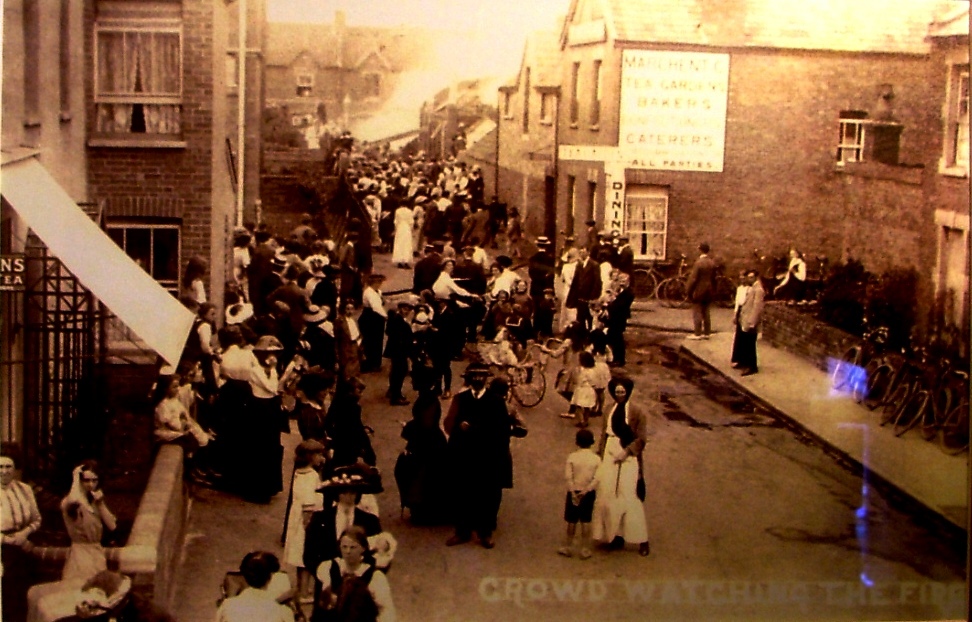 Above is a picture of a crowd watching the fire from the Technical St end. Below are pictures of the fire fighters in action and the aftermath. Note the C.P. initials on the cards referring to Charles Pearson, local photographer. 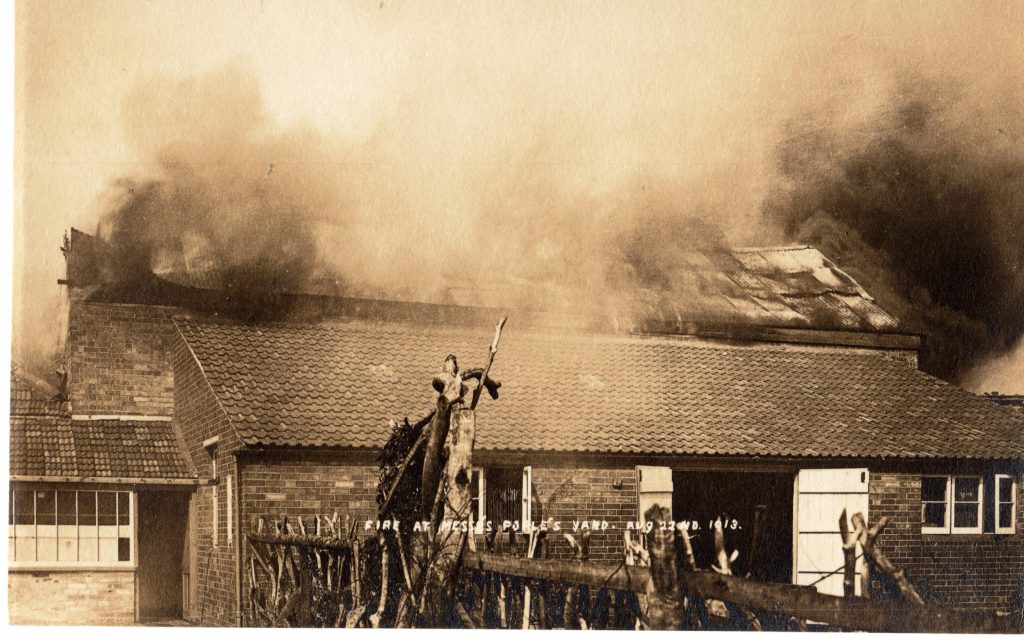 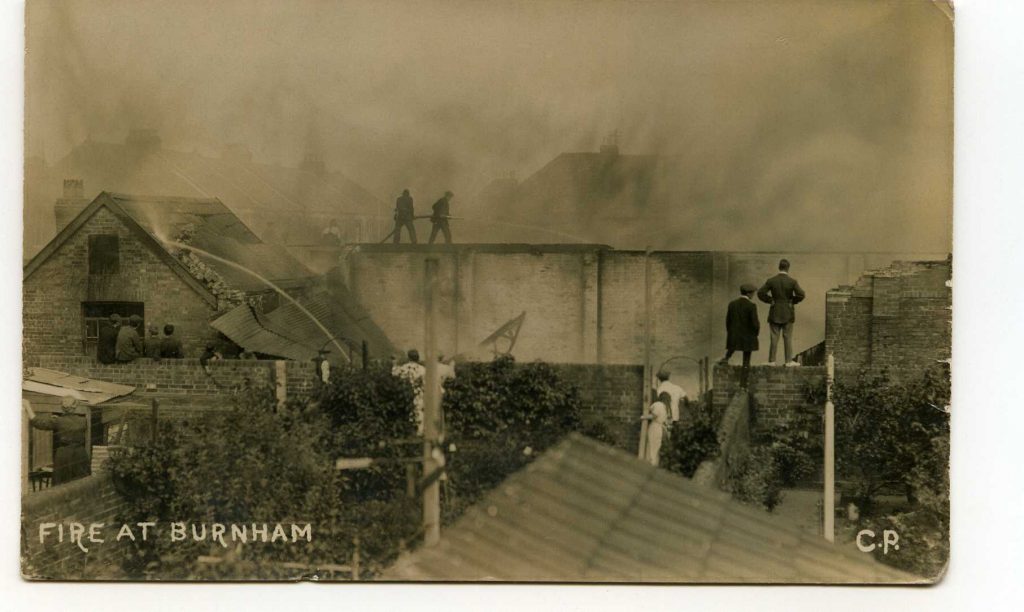 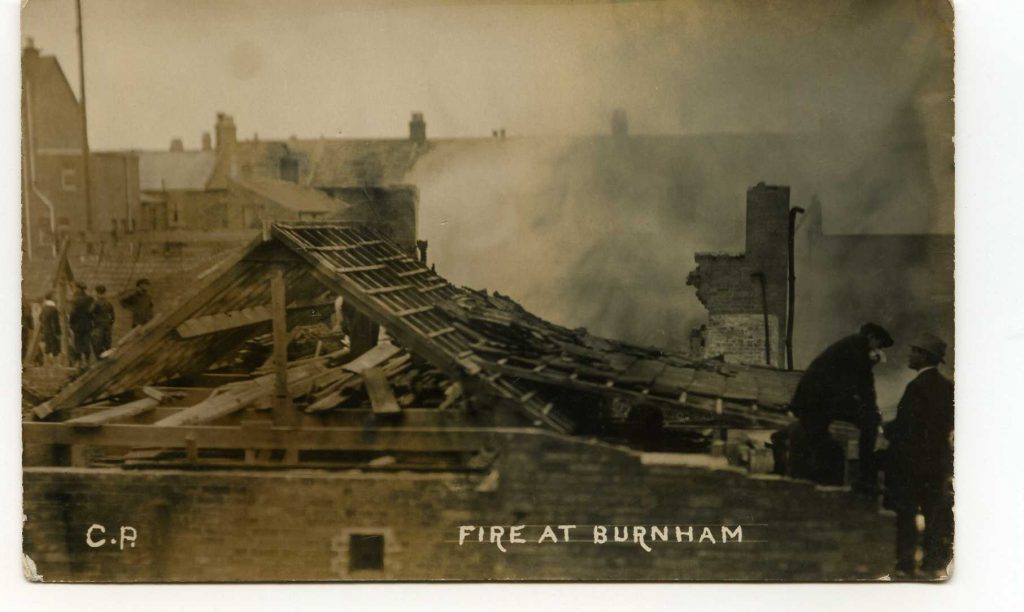 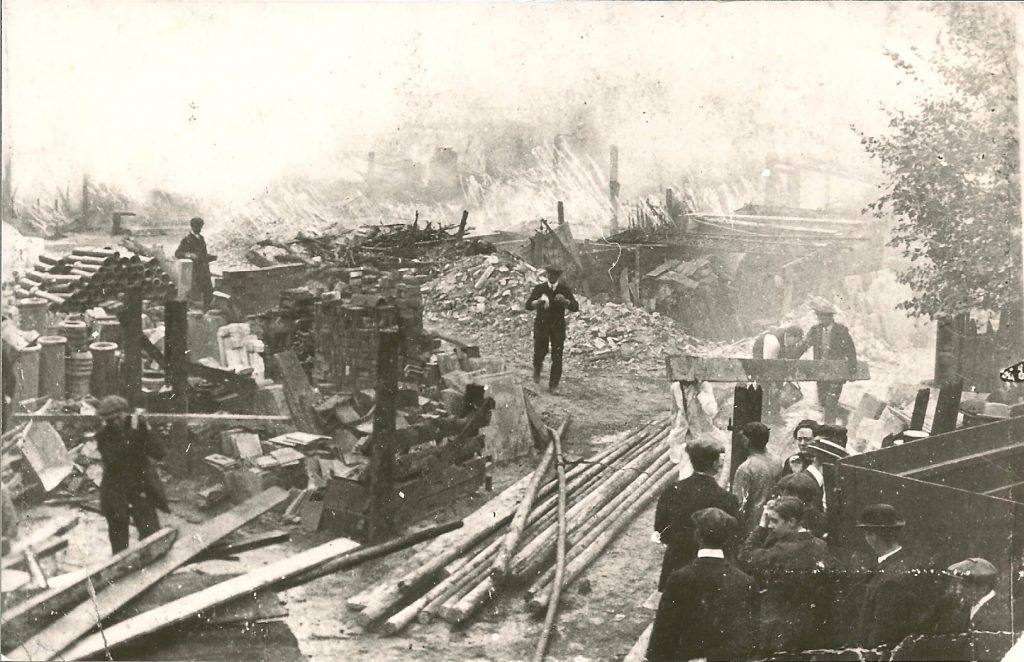 There is anecdotal evidence that in the photo above the man in the centre has a chicken under each arm. He was about to give these to a couple of young lads to put in a nearby garden to prevent their escape. Pople’s  building materials can be seen  scattered around.

The appliances used at this fire may well have been similar to the one below (photo undated). 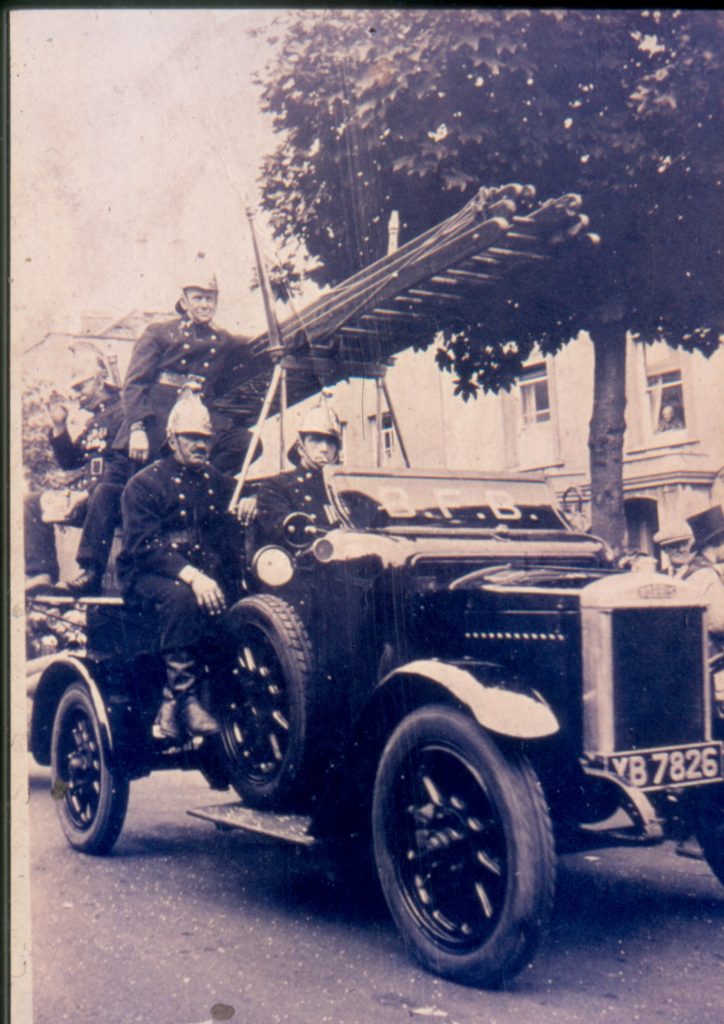 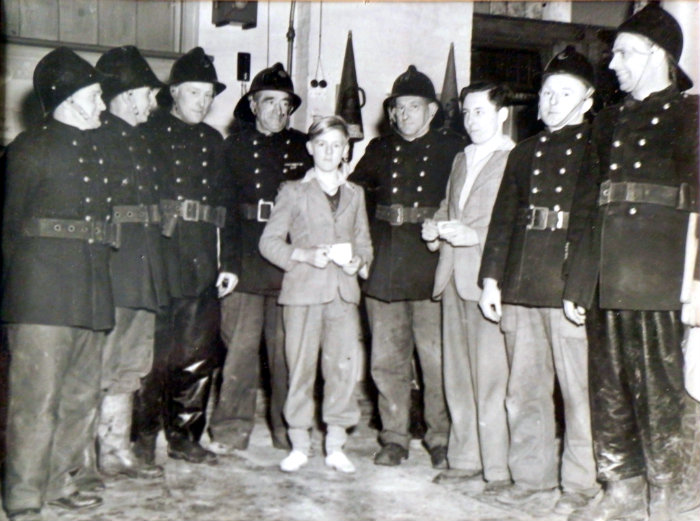 On Tuesday 15th April 1952  14 year old Highbridge boy Terry Fisher was rescued from the cliffs at Brean over 70 feet above the beach. Terry had been walking with his friend Adrian Porter when he spotted a gulls nest on a spur of rock about 80 feet above the sand. He attempted to climb to the nest but became stuck in a crevice about 10 feet below it unable to move up or down. Adrian sought help from a farmhouse about half a mile away and P.C Pollard of Burnham Police was sent. Being unable to reach the boy himself he sent for the Fire Brigade. Terry was eventually hauled up the 200 feet to the top of the cliff in a fireman’s chair after the P.C and three of the firemen climbed down to him. ALthough he had been unabe to sit and had to cling to the rock for 3 hours he was described as being little the worse for his experience.