Joseph Braithwaite  had connections with the Adult School movement in London and when he established a second home in Burnham he was instrumental in setting up a school in the Victoria Rooms, Alfred St (High St). A new building was constructed in Adam St  with the foundation stone laid by Mrs Braithwaite in 1889 [Taunton Courier] and the school moved there in 1890 initially offering classes in  literacy, social studies and Bible studies. At that time it was surrounded by fields. Its motto was “Let Brotherly Love Continue”. 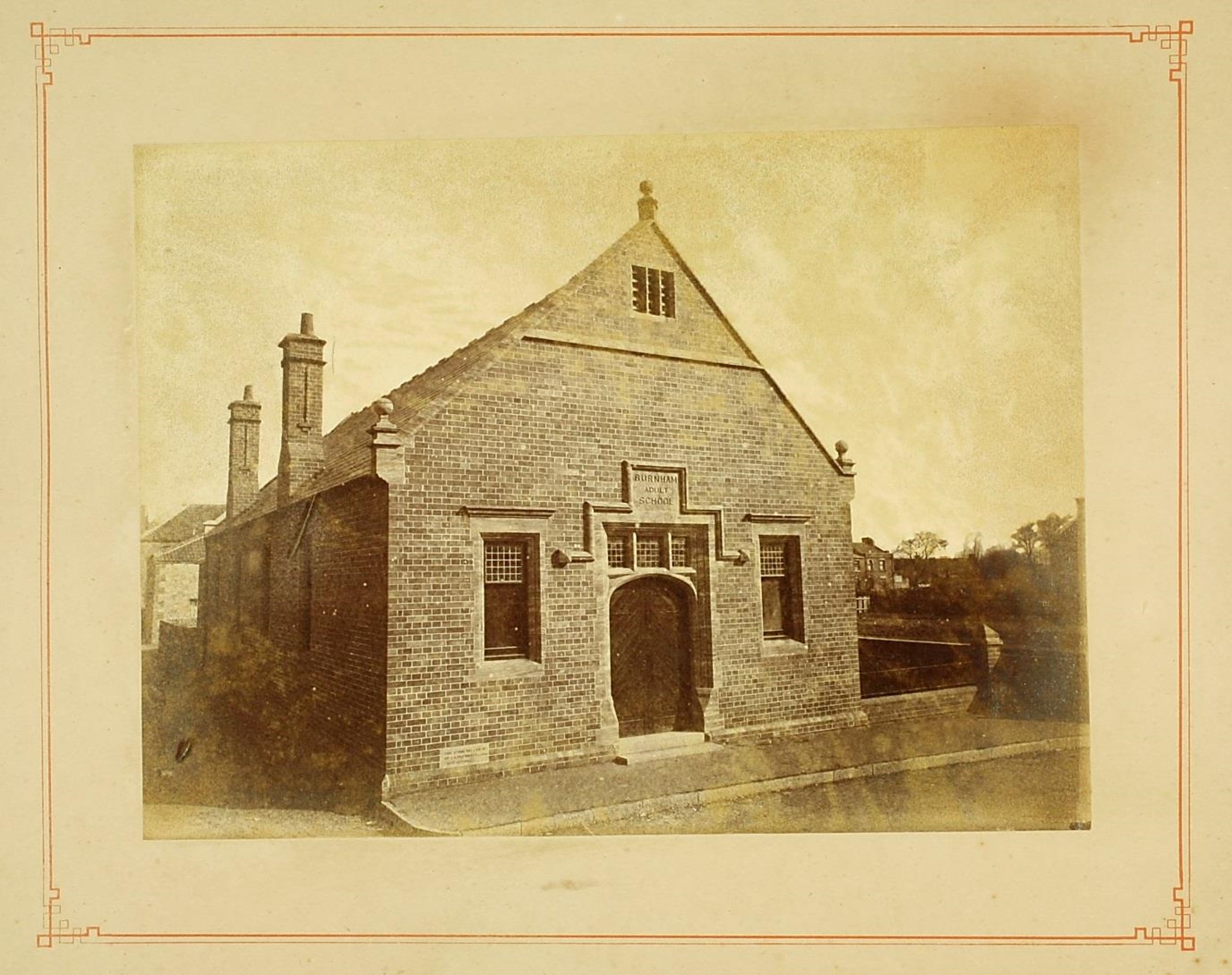 Evening lectures were an early feature: 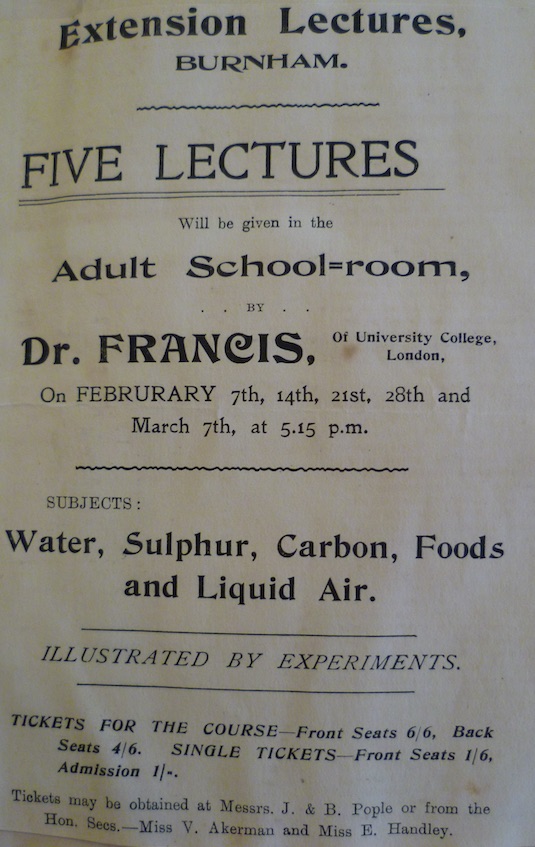 A savings club was formed to encourage thrift, followed by a coal club. The trustees bought coal in bulk to provide savings to the members.

Eventually a room was added at the rear for billiards and other indoor games to encourage attendance by younger people. The field on which Frith House now stands was purchased in the mid 1930’s as a football field (team members were required to attend the school at least 6 times a year), the pitch was later used by the town team. The small grandstand was unfortunately destroyed by fire. A small orchestra was also formed and played on Sunday mornings at the school.

During WWII the building was used as an A.R.P. (Air Raid Precautions) Centre.

From 1936 members of the school could borrow books which were supplied to the school by the Somerset County Council Library headquarters in Princess St (on the site of the present library). As the need for the Adult School had declined the premises were leased to the County Council in 1951, at a peppercorn rent, for use as a branch library to replace the small one which had previously existed in the Town (Princess) Hall. Both of these ventures were run by ex Adult School member William Oxenham until his retirement in 1954.

The membership of the library grew from less than 3,000 in 1958 to over 7,000 by 1984. During these years various proposals were made for either extending the premises either at the rear or by building an internal balcony level but none came to fruition. From 1980 plans began for the construction of a new library on the site of the school kitchen in Princess St . This was opened in 1985.

The Adult School premises were then occupied by the Disability Resource Group for a number of years before being turned over to commercial use. Over the years prior to this rooms had also been used by a number of local groups such as: the Burnham Dramatic Society (1950’s for rehearsals);  Quakers for Sunday worship; the Women’s Institute for a weekly market (1970’s & 80’s); and the Citizens Advice Bureau. So for around 100 years the building had been an important  social and cultural centre for the town.

(Information from Mary Wridgway, Town Librarian, in Burnham on Sea Archaeological and Natural History Society Journal 1997 and  from a  pamphlet produced by Mr Bill Pickard , who was Chairman of the Somerset Disabled Action Group celebrating the centenary of the building in 1989.The  pamphlet also gave  acknowledgements to John Sheppard, Geoff Maslen and Richard Mackilligin, )

The group picture above, supplied by A. Young, appears to be associated with the Adult School. Some of those in the picture are: Miss Slocombe; Mrs Parker; Mrs Ladkin; Evelyn King; Pansy Dyer; Mrs Holt; Mrs Combes; Alice young; Florence Young; Doreen Kingston; Mrs Wynn;  Joan Tyndall; Mrs Bickham; Mrs Harding; Peggy Webb; Mrs Clapp; Mrs Turner . If anyone has any more information about this group please let us know.