The picture below shows the position of the dedication plaque (inset) on the outside of the extended building and in its original position on the school master’s house (also inset). This plaque now stands, together with a bust of George Reed, at the entrance to the new St Andrew’s school. 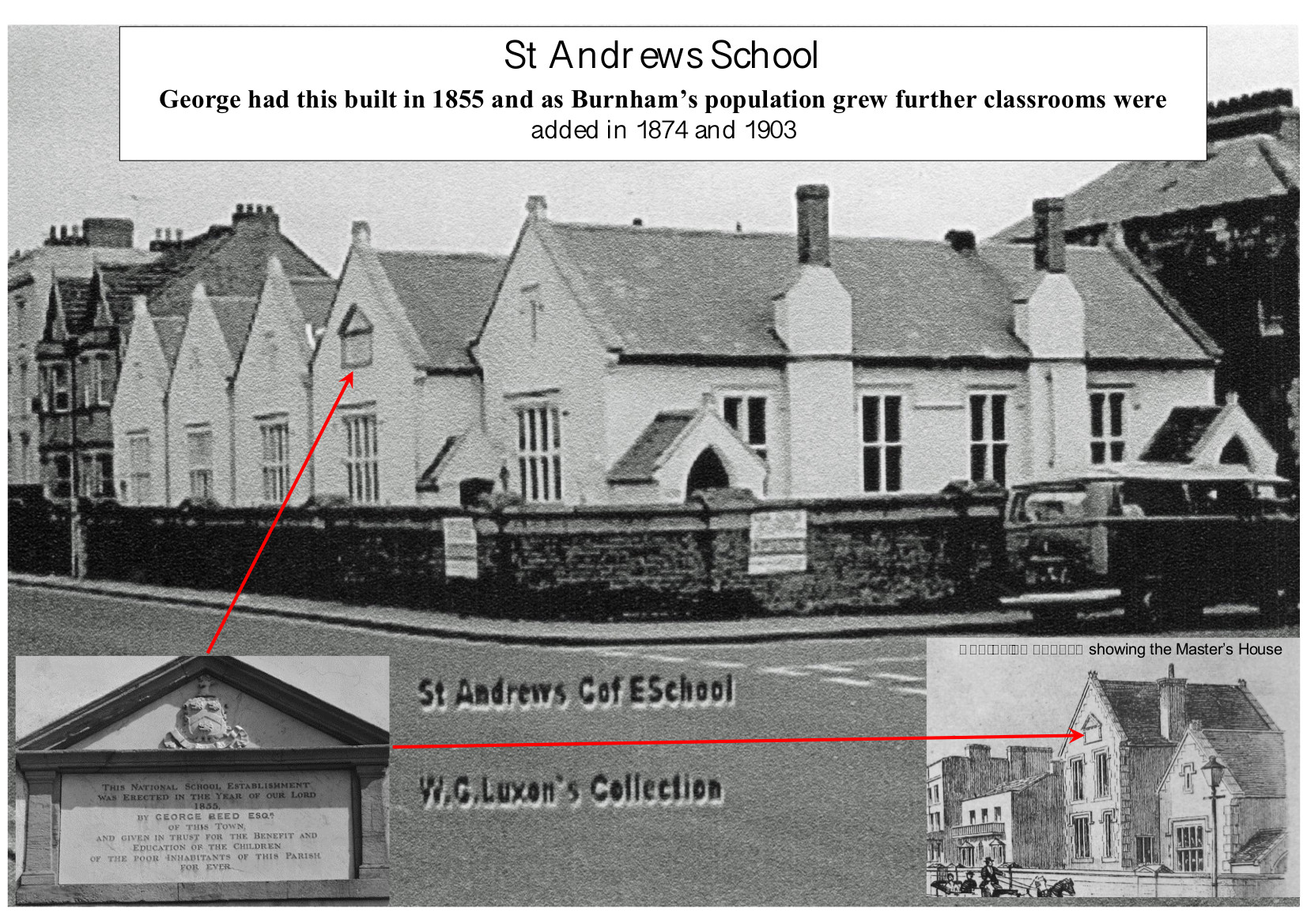 The original picture is from the Glyn Luxon collection. 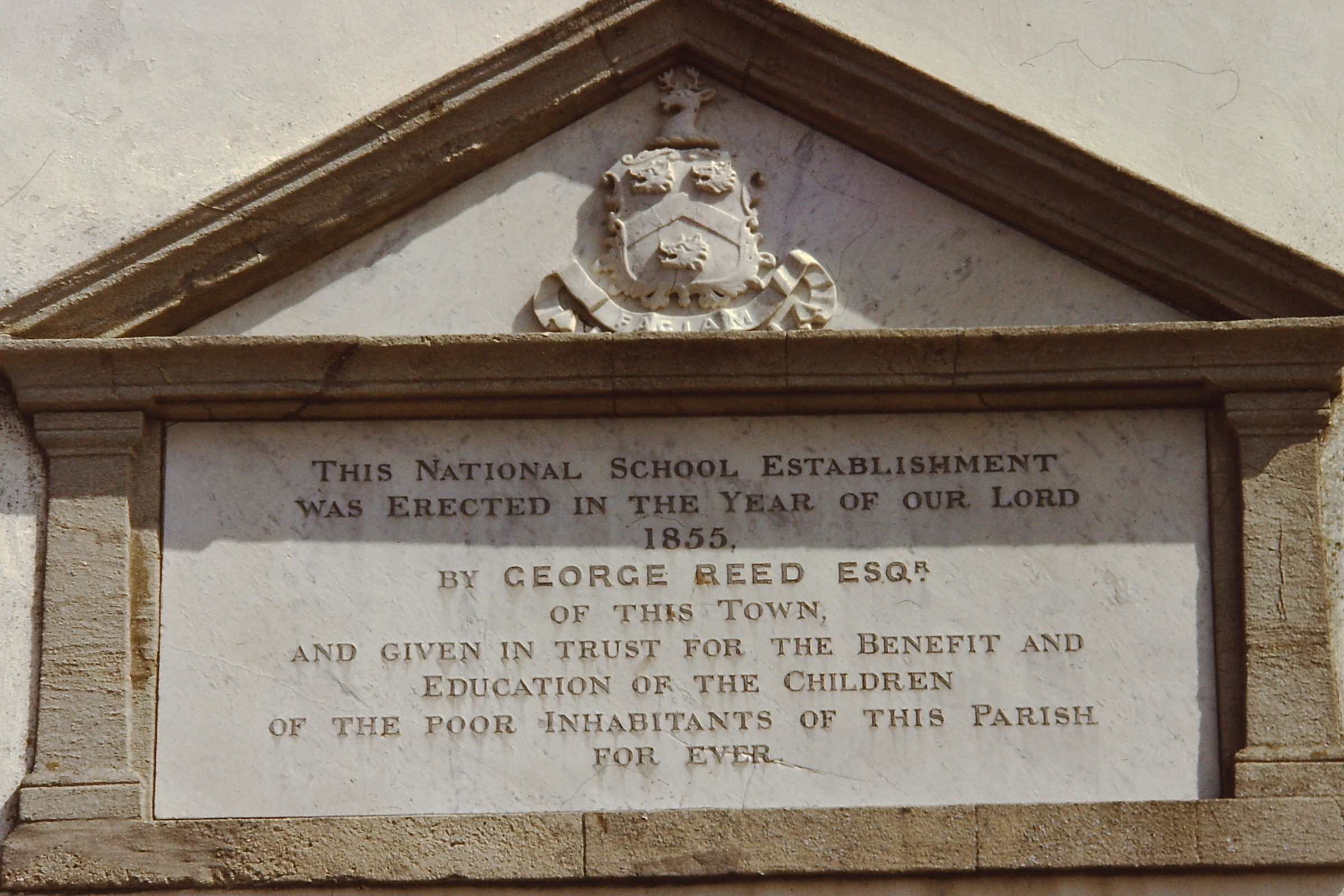 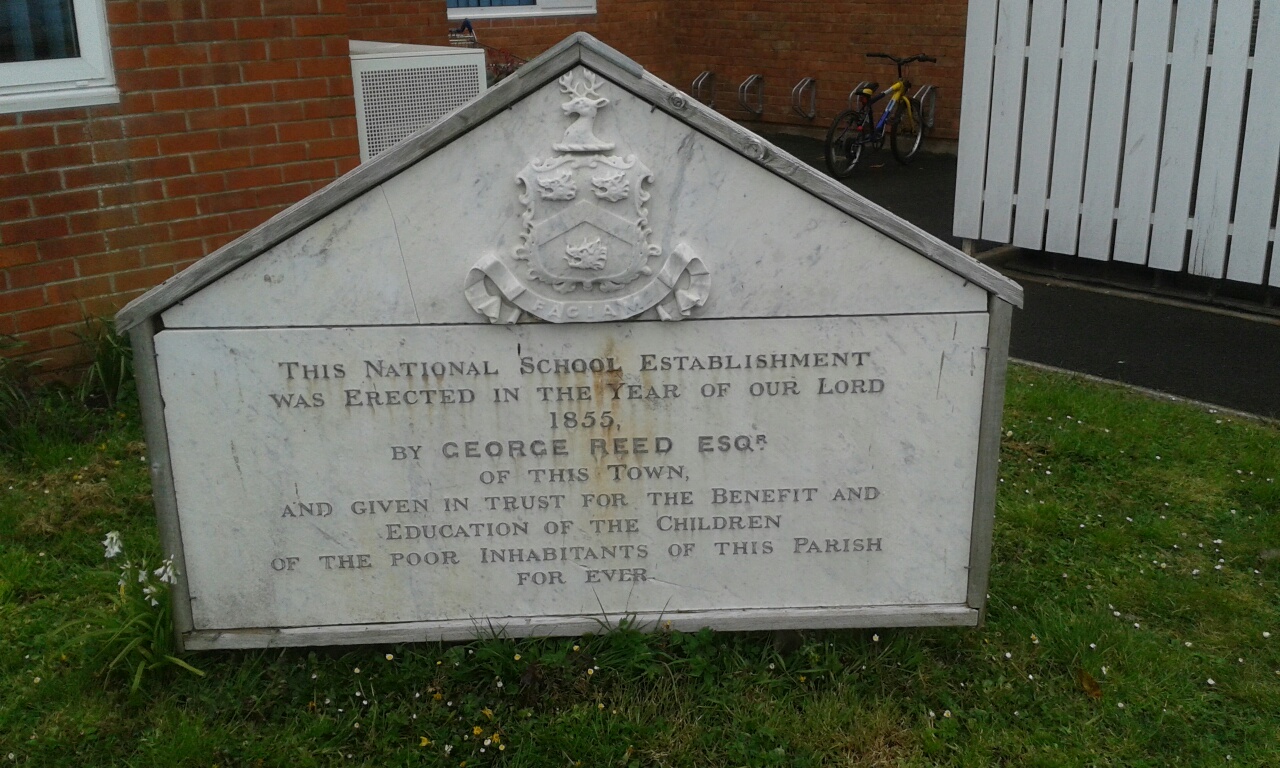 The next picture is of the foundation stone as it is currently displayed in the inner courtyard of the new St Andrew’s School. 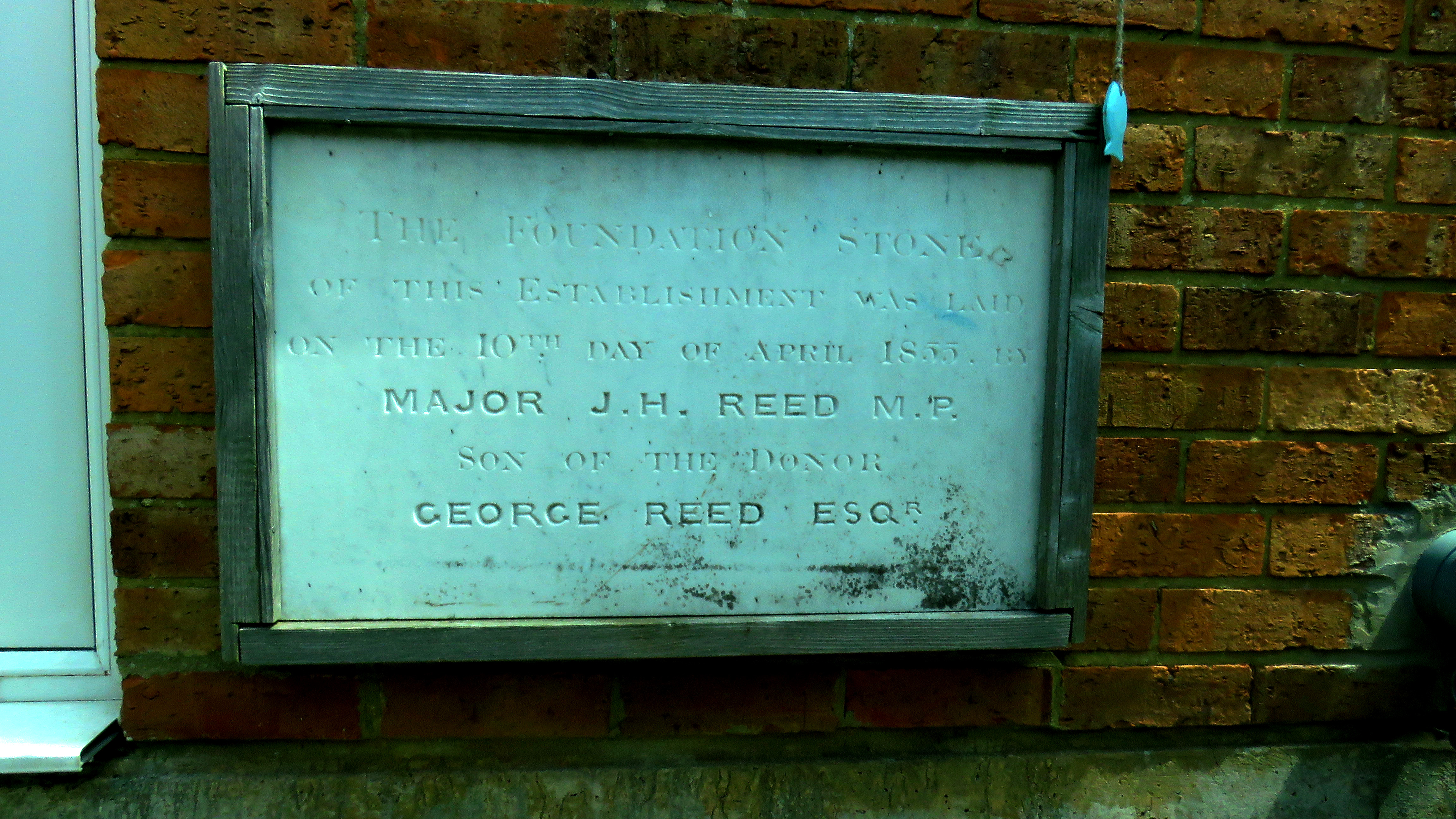 Here is the plan of the school for what appears to have been its first extension along the Esplanade in 1874. The master’s house, which can be seen in the inset in the picture at the top of the page, has been demolished  and replaced with  new classrooms.  Further infants room have been built, set back from the road. 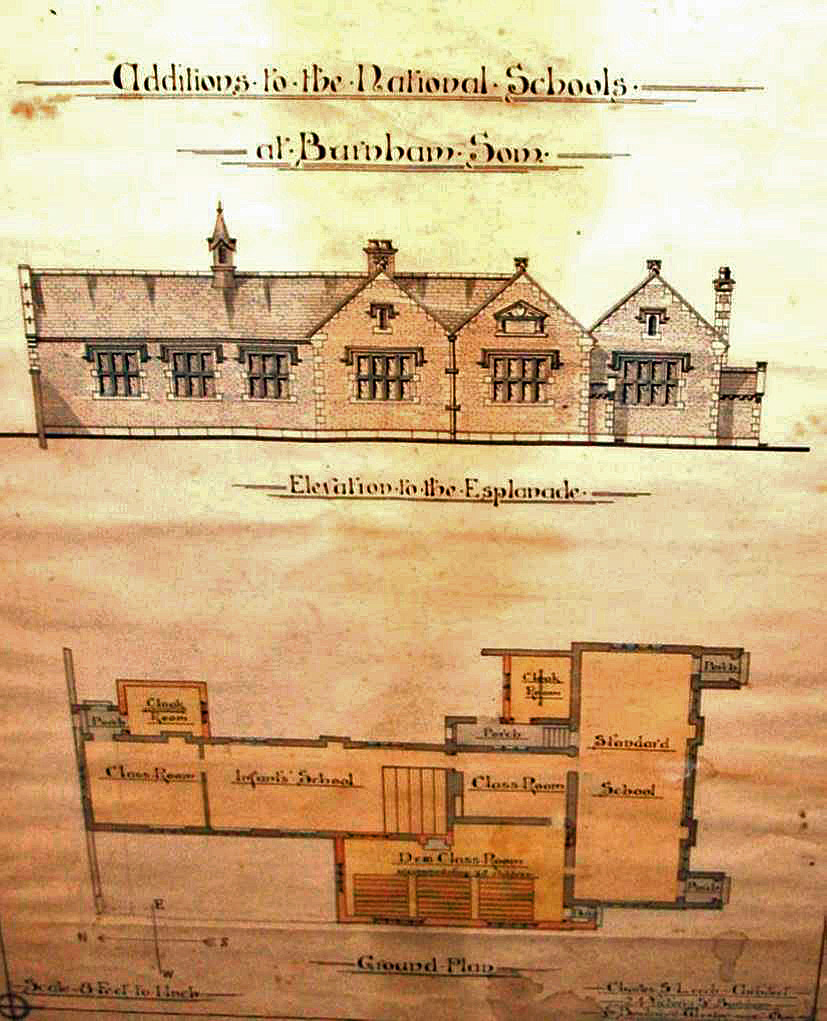 The next picture shows the school after its 1903 extension. Here it can be seen that the set back section has now been built out level with the rest. 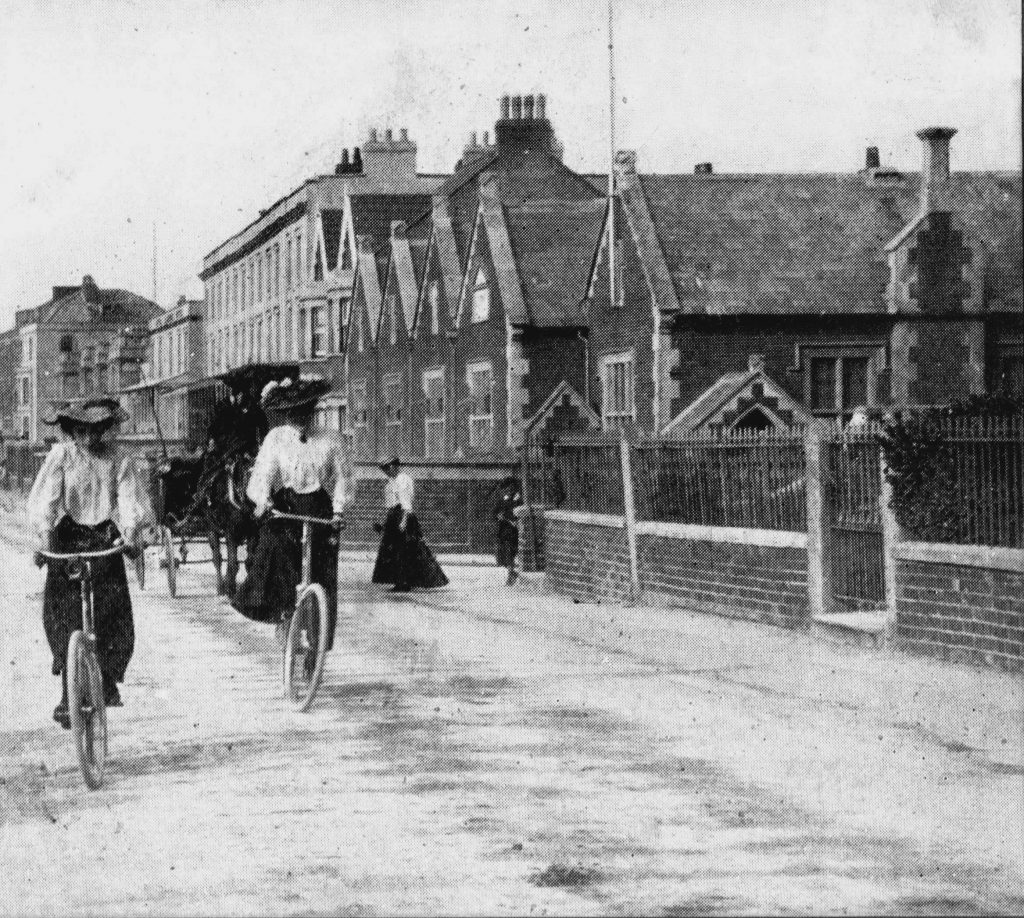 1866 Feb 26th: Eva Randell withdrawn as she was asked to clean school porch.

1866 May 16th: Jane Morse withdrawn as parents object to her carrying water to closets.

1867 Sept 10th: Herbert and Kate Priest withdrawn as unwilling to associate with some poor children at school.

1868 Nov 17th: The children left at 11 a.m. to see the ceremony of laying the foundation of the Burnham market house and town hall.

1869 Sept 29th: Low attendance due to opening of market house.

1871 Aug 12th: Failed to muster school p.m. because of an excursion to the town from Bristol and other places to attend some foolish amusement in field near school.

1872 June 3rd: Mrs Winter came and abused me most disgracefully, swore at my son and threatened his life because I kept her daughter in after school instead of beating her. Mr Cox also gave me insolence because I had disagreed with is daughter Sarah.

1880 Feb 20th: Decided to issue notice to parents that no child could have certificate of merit without attendance at school. law seems to have no effect on them.

1880 Mar 12th: Senior pupil teacher accused of striking boy with slate causing severe swelling of the glands. However proved to be mumps which is prevalent.

1881  Log records the accidental death by drowning of four youngsters which occurred on July 15th. Their gravestone stands in the churchyard just inside the main gate to the left. 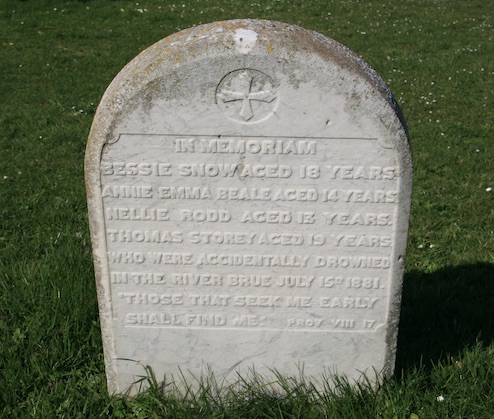 1884 March 20th: Mr Hooper gave notice his son Alfred will not attend school as his nervous system is out of order.

1885 Jan 20th: Attendance officer Mr Elliott died today. The committee now have the opportunity to revise their procedures which are simply a farce.

1885 Dec 3rd: Ernest Hancock disobedient to teacher and excessively impudent to me so I was obliged to cane him.

1887 Dec 22nd: Third and upper standards do most  work on paper rather than slates.

1889 Dec 20th: Vicar came to distribute prizes and certificates. All the infants received a picture book or card.

1890 Feb 28th: New offices erected. They are provided with automatic flushing apparatus – a great improvement on the old ones.

1891 June 27th: H.M.  Inspectors Report “The school is orderly and under good control.”

1892 Dec 13th: Mr Fenn of National Temperance League came to give a lecture on the chemical effects of alcohol.

1894 Dec 6th: After school we had an exhibition of Edison’s phonograph which was much appreciated.

1897 Sept 6th: During holiday school painted and gas laid on.

1898 Feb 23rd: Inspector investigated charges of undue chastisement. Reginald Wilcox stated he was punished for not having a book – then said he could’nt remember it – but his mother had told him to say it.

1898 Mar 8th: The education dept. Considered the inspector’s report about the infliction  of chastisement on the children and concluded that allegations of cruelty made against Mr May were unfounded.

1899 Apr 10th: Golf tournament has taken a number of boys to act as caddies.

1902 June 23rd: Broke up for rest of week for King’s coronation festivities.

1903 Feb 13th: Drill in the playground but spectators a great nuisance and interfere with children’s attention.

1903 July 13th: panic in town due to diphtheria outbreak. many absent.

1906 Spet 11th: A cookery centre has been established for 3 classes to attend.

1909 May 5th: A new departure. A school nurse appointed by county council inspected the heads of all 378 children.

1911 May 26th: Considerable interference from work erecting a new pavilion and extending the esplanade in front of the school.

1922 Oct 4th: School assembled at 2 o’clock and marched to the new cottage hospital for unveiling of a war memorial.

1927 July 25th: School inspections notes the school is insufficiently staffed. The head, with a class of over 40 himself is unable to follow up his periodical criticisms of the other 5 class teachers ‘though a young and vigorous man, he is clearly feeling the strain and should have further help’.

1933 Nov 6th: The electric cable has been brought into school at my expense.

1938 Feb 4th: All Berrow children and those living in Highbridge sent home on instruction from County, owing to typhoid epidemic at Highbridge and West Huntspill.

1941 Mar 28th: heavy practice bombing badly shook the building. On examination by a builder, ceiling collapsed. Room was vacant, children having been evacuated.

1954 Apr 6th: 50 children and 2 teachers saw a ballet performance in the pavilion.

1955 Jul 22nd: School closed for summer vacation. While aircraft break the sound barrier above u, inside the school during this same vacation electricity has at last replaced gas lighting. Hallelujah!

1955 Oct 10th: Staff have agreed to paint the rear of the school and oil the front gate at half term. I have no office but there is no money available so must try to raise the money by jumble sales etc.

1956 Jan 20th: Received film projector and screen. Now we need films and must have money for this purpose.

1956 Nov 14th: A letter from Divisional Education Office states “There would appear to be no objection to the school being known locally as St Andrew’s. Until the authority receives an official communication, the school will be known as the Burnham on Sea VC School.” [see entry of 1906 above]

1973 Feb 16th: I took over the keys to the new school today from the site foreman.

1973 Mar 23rd: Moving day! Staff and helpers sen most of the day  emptying boxes and putting away.

1973 Jun 25th: This week we celebrate the opening of our new school with music, dancing and drama. parents and visitors were received on Tuesday. Wednesday’s sports day was postponed until Friday because of rain……A cheese and wine evening was organised by the Parent Association. 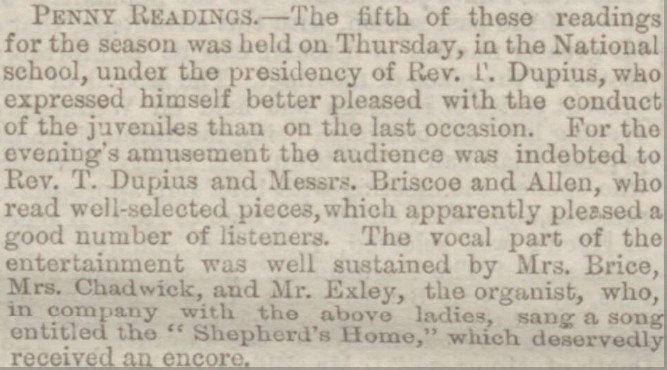 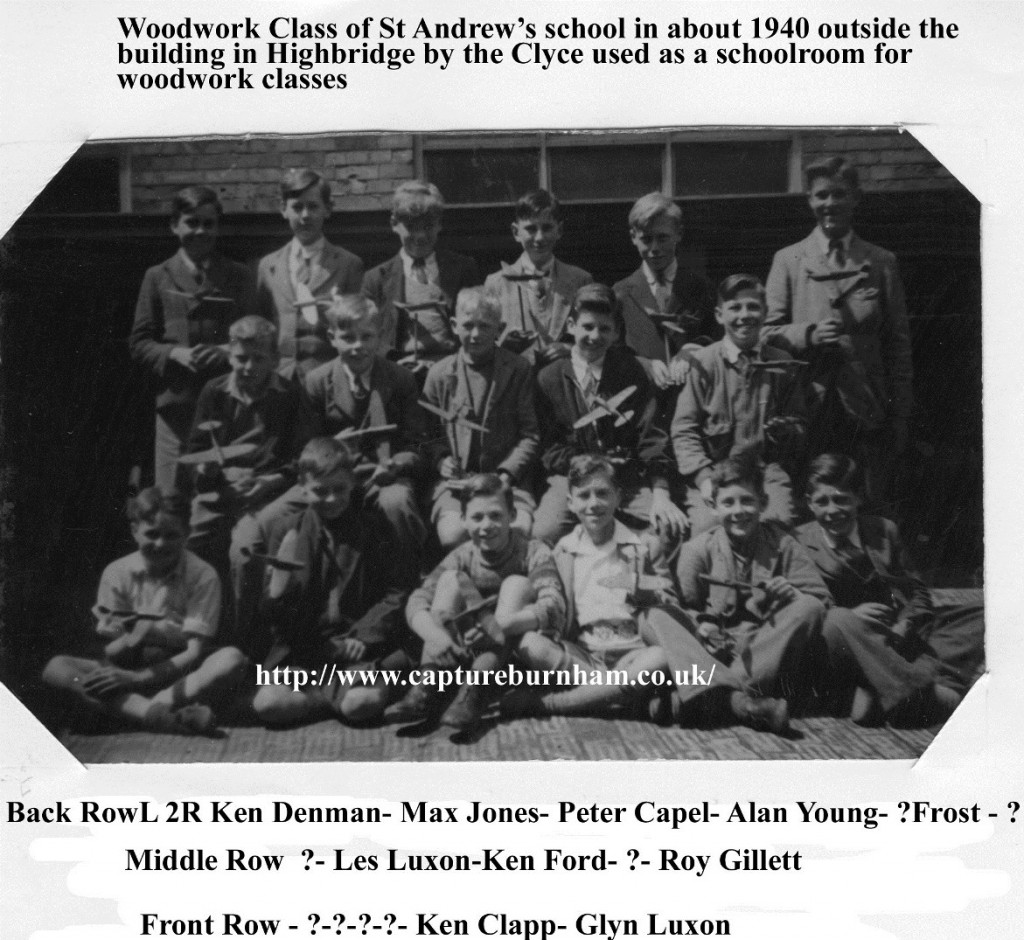 If anyone has any pictures or other memories to share please let us know.