It appears the Burnham has offered mazes for public entertainment on two different sites: the ‘Pleasure Gardens’ near to the station and the ‘Puzzle Gardens’ on the Berrow Road. There do remain some puzzles about these attractions. 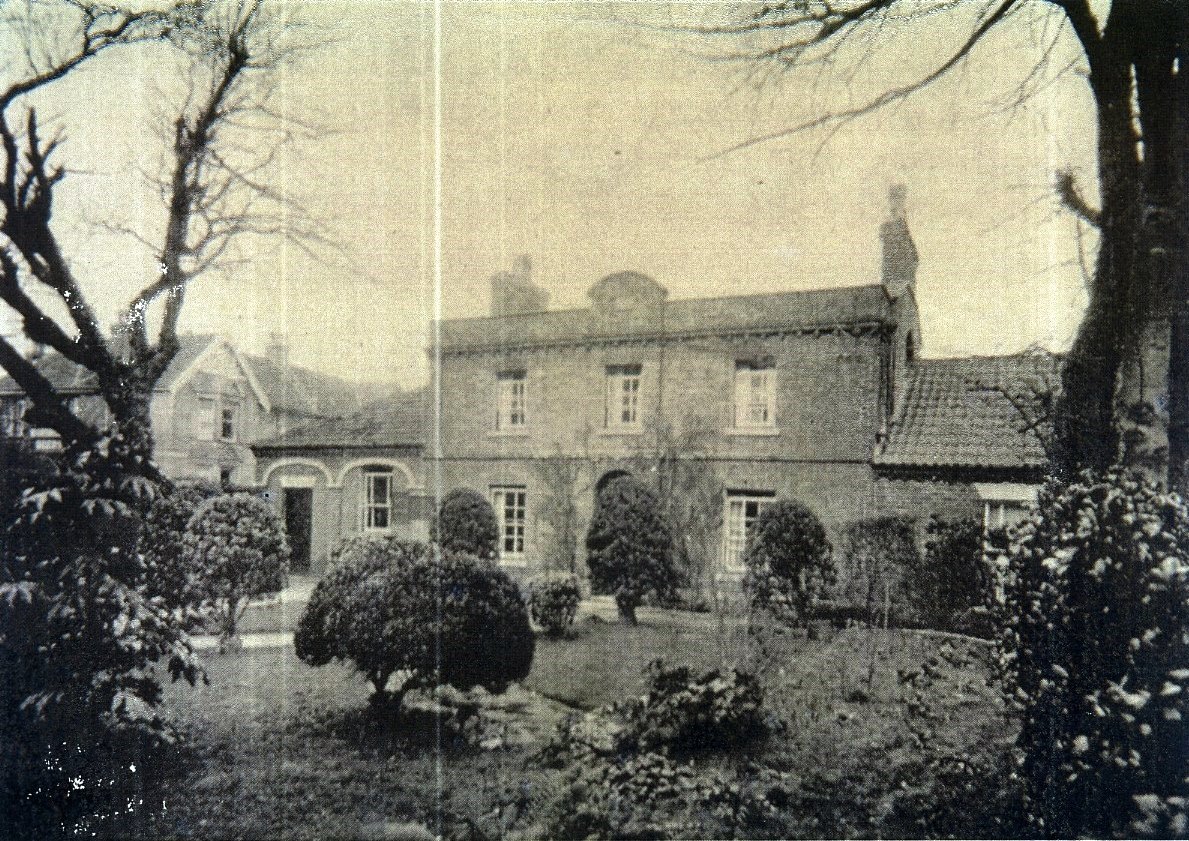 The Salisbury Guide to Burnham of 1858 tells us:

“From the Pump-room, turning into Berrow Road, we arrive at the

These gardens are the property of G. Reed, Esq., and are in imitation of the famous maze at Hampton Court, though on a smaller scale—they are kept in excellent order by his tenant, Mr. Wm. Harding, and afford much innocent amusement to youthful parties resorting hither for enjoyment and relaxation. During the summer and autumnal months many school children are brought in large and merry companies to enjoy a long day’s ramble on the beach; and on these joyous occasions the puzzle gardens are resorted to with much glee. For the railway excursionists also the arboreous refuge of a tea-garden holds out its invitation in successful rivalry to those houses of boisterous mirth, where the refreshment offered is of a more inebriating kind.”

This description is clearly of the premises shown on the Berrow Road on  the o.s. map of 1844-88 below. 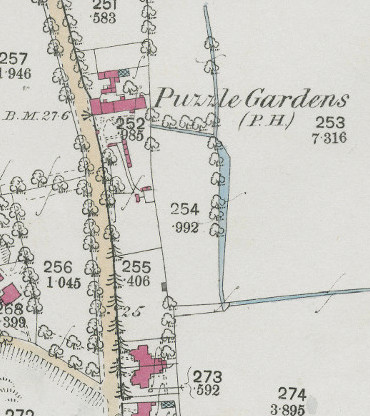 The precise year of the collection of this o.s. data for Burnham is not known but it can be seen  that there is no maze shown in the grounds.

However, on the same map is shown the ‘Pleasure Gardens’ situated just north of the station off what is now Technical St. It appears that these gardens were established in 1873 as they are referred to as “the New Puzzle Gardens and grounds lately opened by Mr Press of the Templars’ Hotel” in a report about a rally of ‘The Good Templars’ Society’ (Western Gazette 1/8/1873).

Curiously this maze is an almost exact replica of the one at Hampton Court, as mentioned in the guide. Given George Reed’s involvement in the railway and the Reed’s Arms Hotel, one would speculate that he might have an interest in an attraction for excursionists so close to the station.  Despite its apparent status as an attraction it is odd that we have not seen any photographs or postcards of this pleasure garden (if anyone has any please contact us).

An advertisement from the Tiverton Gazette of 6th June 1876 proclaims the reopening of these gardens, also referred to here as ‘Puzzle Gardens’. Whether this is after a lengthy closure or just for a new season is not clear. However some refurbishment may have taken place as a new room is mentioned. Could this be what now remains as the Shaftesbury Hall? 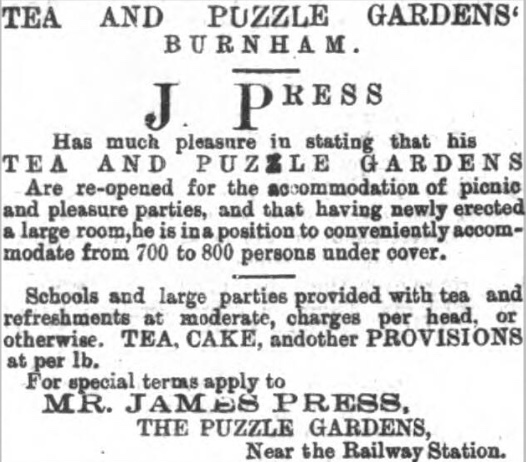 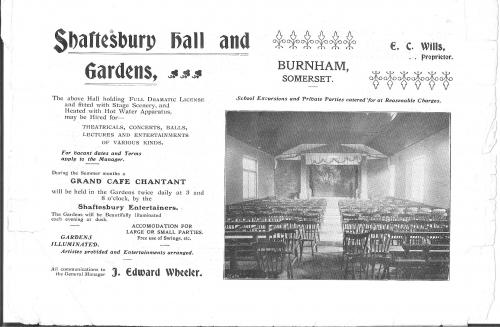 Press’s Gardens also possessed a skating rink as evidenced by an article in the Western Gazette of 11th May 1883: 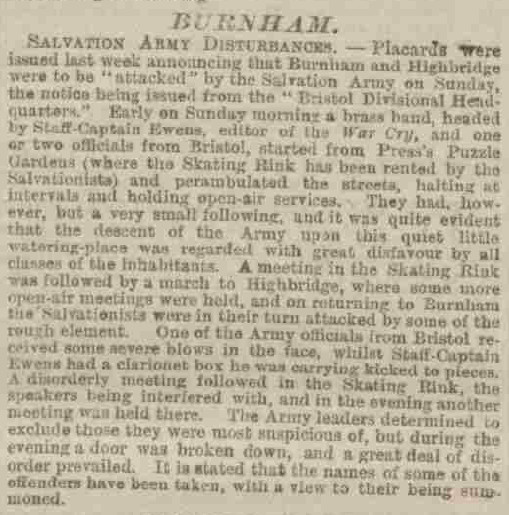 It is likely that this was a roller-skating rink as a craze for indoor roller skating had developed in this country from the mid 1870’s.

Later these gardens were owned by the Close family. Burnham Gazette of 1969 had a retrospective paraphrase of an article from July 1894: “Near the railway station and pier were Close’s Pleasure Gardens where 300 people could be accommodated in the large room for dinners & teas. Adjoining the station yard were Press’s Refreshment Rooms, while in Berrow Road were Moore’s old-established Puzzle & Tea Gardens.” The 1891 census shows that the Close family were already  in possession at that time. Interestingly they were still referred to as resident at ‘Puzzle Gardens, Abingdon St’ in the 1901 census, after probable construction of Jubilee St on the maze site, but by 1911 they had moved and there is no census entry for the address.

Below is a  ‘then & now’  photo of a crowd watching a fire in buildings along what would have been the western side of the pleasure gardens. 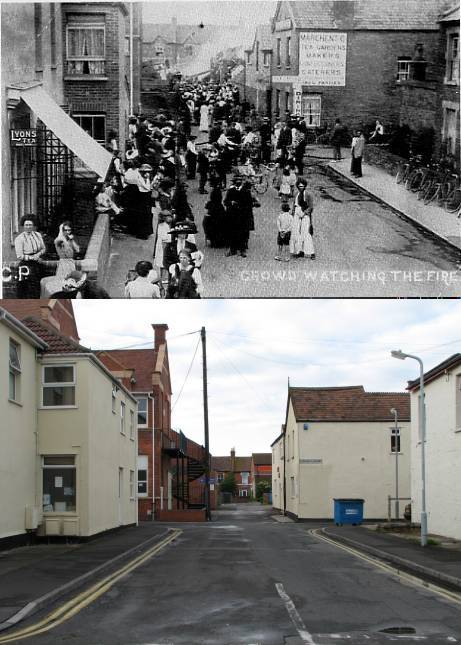 In the top photo we can see that Marchent’s Tea Room & Gardens still exists. However, it is likely that by this time the larger pleasure gardens and maze would have been built over, as Jubilee St, which crosses the site of the maze, was no doubt built in 1897 (Queen Victoria’s Diamond Jubilee). Below is a photo of an excursion party in Marchent’s Tea Garden.

To add to the puzzle, the o.s map of 1894 – 1903 (below) now shows a maze at the Berrow Road ‘Puzzle Gardens’, however it is not a replica of the Hampton Court maze, but a rather more complex looking one. It can be seen that the site of the maze is the land now occupied  by numbers 44 and 46 Berrow Road. 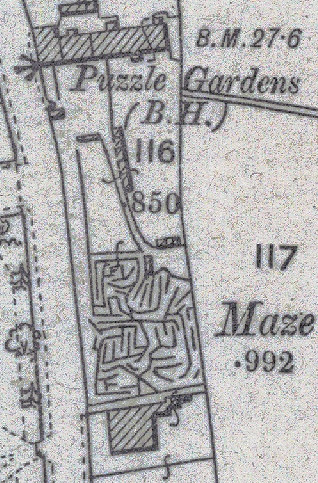 An advert from June 1858 shows one of the entertainments put on at Harding’s Berrow Rd gardens: 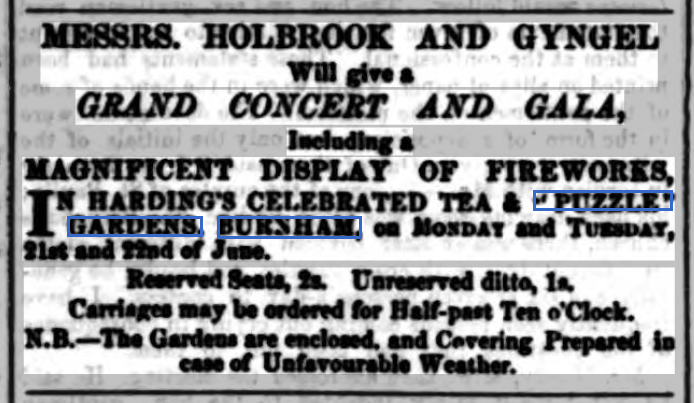 A notice of re-opening (probably for the season) in the Western Gazette on 11th May 1866, tells us that the gardens are by this time run by a Mr Moore. Confusingly though another item from the same source in January of that year says:

This  does not refer to Press’s Puzzle Gardens as the time and position is wrong, so who is Mr Seaman?

Just to add further confusion another report in the same periodical from August 1866 says of Burnham “It is reported that an influential hotel building company are about to erect a new hotel here, in connection with which are to be large and attractive puzzle and pleasure gardens. The site selected is just beyond Catherine-terrace – a capital position commanding as it does a splendid view of the Bristol Channel” Clearly this project never came to fruition. It is not clear on which side of Catherine Terrace this would have been, possibly Maddock’s Slade (though Julia terrace is not mentioned)?

Another  item in the Western Gazette of 1st September 1888 shows a transfer of license of The Berrow Rd Puzzle Gardens from Charles Moore to his widow Charlotte.   An advertisement  of 11th August 1894 from the same source shows the gardens as under new management. If this maze was changed perhaps it was at this time. Neither this advert nor the later one below it make any mention of a maze. 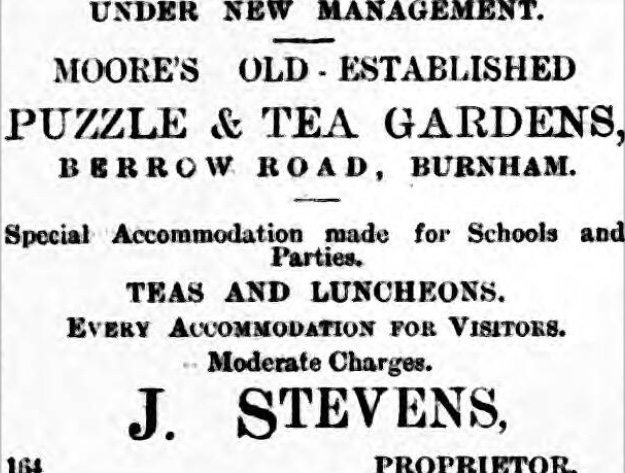 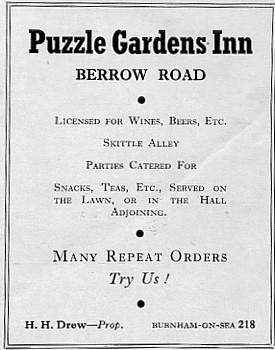 The advert above is probably from a Burnham Guide but the date is uncertain. It has the proprietor as H.H. Drew. However other sources tell us that by 1930 the business had passed to F.C. Edwards, who died in that year leaving it to his widow Alice.  The business continued  until early in 1959 when it was closed and the full license transferred to Mr Aubrey Hooper of the Ring o’ Bells in Oxford Street which previously had a limited license (Taunton Gazette 7/2/59). We do not know whether or not the maze survived as long as this.  Any information from people with memories of the maze would be welcome. Below is a picture of the Berrow Road frontage of the cottage during its later days as a public house. 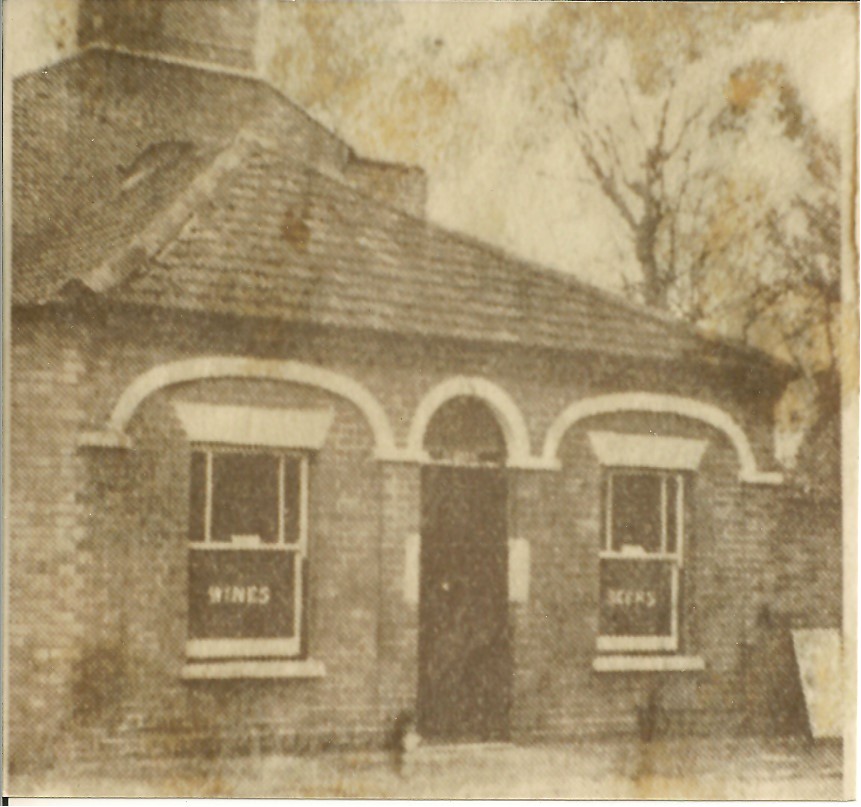 The Bristol Mercury Guide to Burnham of 1884 states:

“The two puzzle gardens in Alfred street and on the Berrow road are much frequented by picnic parties and excursionists. Happily the acreage of the grounds is not excessive, so that, although no Burnham guide is published, visitors will not be in danger of losing themselves among these labyrinths. One of the proprietors [our italics] is careful to announce that his gardens were laid out in imitation of the famous maze at  Hampton Court,  and, judging from the restrictions imposed on patrons he is equally anxious to disavow having taken Cremorne as his model.”

[It is slightly confusing that the guide refers to one garden being in Alfred Street, however as Alfred St was what we now know as High St, one assumes this refers to the proximity of the ‘Pleasure Gardens’  to the station end of that road.]

The reference to Cremorne is to the Cremorne Pleasure Gardens in London which had by the time of its closure in 1877 had developed a rather racy reputation. It seems likely, therefore that the proprietor who would appear to wish to disavow Cremorne would be the same as had the “arboreous refuge of a tea-garden” which ” holds out its invitation in successful rivalry to those houses of boisterous mirth”. This again would locate the Hampton Court replica at the ‘Puzzle Gardens’.

Below is an interesting article from the Bridgwater Mercury and Gazette 1968 about the recollections of  Eleanor Marchent who’s parents ran the Tea Garden  which remained on the Technical St site during the early 20th century after Press’s Puzzle Gardens were built over. It paints an interesting picture of many aspects of the times. 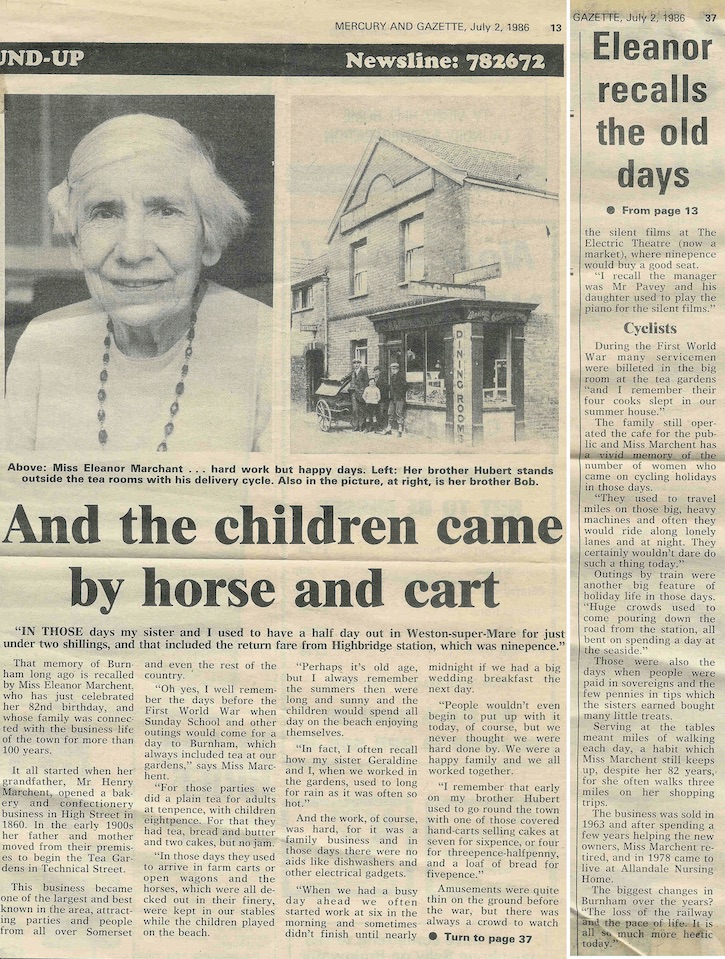