Before the construction of the Ritz Cinema  in the mid 1930’s its site was occupied by the Lifeboat Pavilion, a ‘high-class’ restaurant, which had already been used to show silent films. The Lifeboat Pavilion was built in 1902 as an annexe to the popular Lifeboat Restaurant further down Victoria St.

The Ritz was built to provide Burnham and the district with a modern cinema. Like the Electric / Majestic cinema.  The Ritz was on the W. Truman Dickens circuit. It had 612 seats in balcony & stalls.

A souvenir programme of the Ritz’s opening ceremony included this foreword about the building:

‘The building is designed to meet the requirements of the district 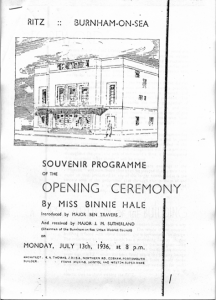 and is equipped with all that is most modern in cinema practise, the complete comfort of the entire audience is assured, and entertainment in the full sense of the word will be provided. The construction of the cinema represents the welding together of skilled technicians, solid labour and British materials, and the proprietor would like to place on record his appreciation of the services both large and small, rendered by those who have contributed to the development of the Ritz, especially Frank Wilkins, the main contractors.

It has long been felt that a holiday resort such as Burnham-on-Sea should have a modern theatre, and it was with this end in view that an extensive and fully equipped stage was included in the scheme. Although the policy of the management will be to present, throughout he year, the pick of the world’s films, it is anticipated that occasional “live shows” will be staged.

Patrons who have enjoyed so many pleasant evenings at the “Majestic” will now, more than ever, be assured of entertainment equal to that presented in any of the larger towns, and it is the sincere wish of the proprietor that through the medium of the manager and staff a warm bond of personal contact will be established with patrons old and new.’

This short archive film from the Norman Gobey collection shows the building and opening of the Ritz cinema.

Discover the next location on the trail: 23. Princess Street School