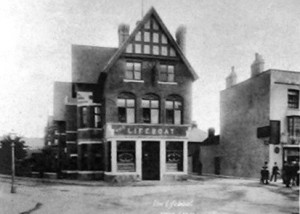 The Lifeboat Restaurant was built in on the site of The Masons Arms Public House and opened in 1895.  Mr J. B. Braithwaite, a Quaker who was a man of strict morals and a teetotaller, objected to the excessive drinking which took place at the Masons Arms and purchased the property in 1894 and had the building we see today erected in its place.   He named it the Lifeboat Restaurant.

Many of Burnham’s elderly residents can recall their experiences of the heydays of this restaurant. One person remembers ‘My mother, Lucretia Mary Nora and grandparents Frank and Lucretia O’Dell ran the Lifeboat Restaurant during the first world war. Men who had been wounded were at the Hart House Hospital and the Lysaght Auxiliary Hospital and came to the Lifeboat during the day, if they were well enough, for teas, coffee, snacks and companionship. There were men from the London Regiment, 1st. Battalion London Scottish, 1st Devon’s, 1st Gordon Highlanders, 31st. Bucks Battalion, the Notts & Derby, 3rd South African Infantry, and telegrapher from the Royal Navy and the Royal Fusiliers’.

Advertisements from this time show that it had a reading room and library.  A single bed cost 1 shilling and 6 pence (7 ½ p) per night or 7 shillings (35p) per week; and for 6 pence (2 ½ p) you could take tea, bread and butter, cake, and either jam or shrimps!

Currently the  site is occupied by  a carpet shop.   Previous occupants were Saxons Estate Agents and before that ‘Second To None’ (c1974) , which sold clothing seconds from High Street retailers. 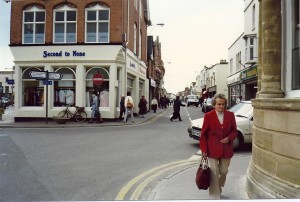 Discover the next location on the trail: 26. Baptist Church