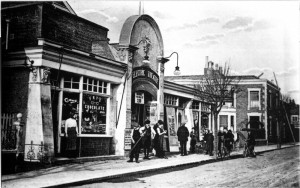 Built in 1912 it was in fact not purpose built as a cinema but was “well established on talkies” by 1934, at which time it had 650 seats on one level and was owned by the W. Truman Dickens film circuit. The frontage had a confectioner’ shop at one end to provide people with sweets while watching the film and a Gent’s hairdresser’s at the other end to catch people after the show. It used a Morrison Sound System until the mid-40’s at which point it was refurbished and reduced to 400 seats.

The Electric Theatre was renamed the Majestic in the late 1930’s, but was shortly afterwards requisitioned by the Ministry of Food as a flour store. When it was de-requisitioned after the war it was no longer needed because of the Ritz Cinema building was now functional, although for a time both cinemas were publishing film advertisements. In the 1950’s the building  was sold to become a Woolworths store which eventually became the Covered Market we see today.

A typical programme for 1914 was advertised in the Burnham Gazette on 22nd Aug:

“A drama entitled ‘Nick Winter and the Masked Thieves’ was the principal feature……during the first half of this week. For the later portion terminating tonight (Saturday), a good variety of films will be screened, the list comprising a Pathe coloured cinema drama ‘His Guiding Star’; comedy in varied phases; and Gazette News.”

Listen to Delia Temlett and Sheila Brookes as they reminisce about the cinemas in Burnham.

This short film, taken by local amateur cinematographer Norman Gobey, was filmed on 9.5mm. It shows crowds of young people waiting to enter the Majestic cinema for a special screening to mark the coronation of King George in 1936.

The cinema changed its name at some point to The Majestic and finally closed its doors in 1937 when it faced competition from the newly opened Ritz. (Burnham on Sea Gazette 23/01/1937) 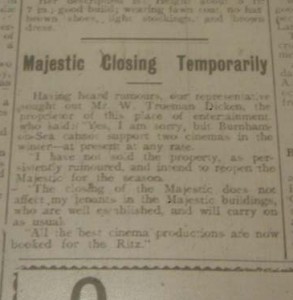 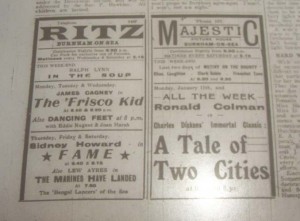 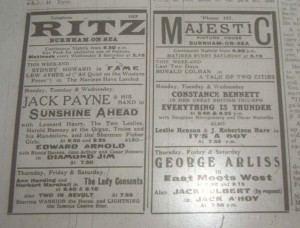 For more information about the High St click here

Discover the next location on the trail: 30. Burnham College