Samuel George Nash, son of a postman, was born in 1913 at Leatherhead, Surrey and went to Dorking High School. In 1928 he started work as a clerk at an insurance firm in London, leaving in 1932 to attend London’s Birbeck College. Unfortunately he had to leave after a year to earn a wage to help pay for medical treatment for his sister. During the late 1930’s he spent time in various parts of Europe.

His interest in archaeology was brought into play when he had some newspaper articles printed in 1939 about a Roman villa unearthed in Ashtead and also a pre-Roman well found at Ewell, Surrey. He may have been a member of the Surrey Archaeological Society at that time.

During World War II he served in North Africa and Italy and on returning to England went briefly back to work in insurance where he passed the Chartered Insurance Institute  Part I Associateship exam. However he soon decided he preferred the outdoor life and became a gardener firstly at a fruit farm in Cornwall and then head gardener at Leatherhead Hospital.

He married on 14th May 1954. In the late 1950’s he moved to Highbridge and went to work as a clerk at the Sealed Motor Components Company in Bridgwater until his retirement in 1977.

There is no record of his interest in local history before he came to Burnham but his interest may have been inspired by living in one of Burnhams oldest houses, Sandyway House (see below) which he renamed Huish after its location.  It seems that at some point he not only excavated the garden but also lifted the floorboards to see what he might find beneath.

During his time in Highbridge Nash was actively investigating the history and archaeology of the area. He recorded archaeological data on every building site he could visit. He became a founder member of the Burnham on Sea Archaeological and Natural History Society, with whom he undertook a series of small scale excavations.

In 1971 he was recruited by Dr Peter Fowler of Bristol University  to carry out archeological recording in advance of the M5 motorway construction east of Brent Knoll. Although he objected to the motorway in  principle it did not stop him from carrying out his own archaeological survey and recording the finds in his usual meticulous detail.

A link to a YouTube video of the building of the M5, from the collection of the late Mr Gordon Pratt, posted by Dave Eldergill (Somerset author, artist & songwriter – www.daveeldergill.org) :

One of the M5 sites at Lakehouse Farm (between Brent Knoll and Rooksbridge) yielded up stone walls, roofing slates, painted wall plaster and hypocaust (central heating duct) tiles of Roman origin. Nash observed building work , service trenches, quarrying and road construction in about 100 sites in Burnham and 300 on the Somerset Levels. He was consulted by the Ordnance Survey to help them in marking Roman sites on their maps, though he was not only Interested in the Roman discoveries that were receiving most attention around this time, but also medieval and post-medieval sites.

Nash was very well-read in the geological and archaeological fields and not only recorded what he found but also tried to interpret it. He compiled a substantial archive of his work running to around 30 thick files covering 62 Roman sites and 200 medieval and post medieval. Copies of these were lodged in the Somerset County Museum but many of his records became scattered.

Most of his archive material is now stored at the Heritage Centre in Taunton and consists of 22 boxes of over 140 individual files. His research includes parish records, archaeological digs, local family trees , land tax records, churchwardens accounts, press cuttings, Roman and Saxon finds.

In 1972 he gave up excavating to concentrate on documents. His last excavation was in 1974 when a brick vault of c. 1750 was opened in Berrow Church and he was asked to take charge of its emptying. Meanwhile he had  started to transcribe the parish records and write a history of Burnham church and to contribute monthly articles for the parish magazine.

The early existence of a substantial tidal creek between Highbridge and Alstone,  and another south of Brent Knoll were explored by Nash. The latter would correspond to what is  identified as the River Siger. The former would pre-date the River Brue, a medieval creation. Nash’s observations of various locations along the Burnham – Highbridge road, once known as ‘Sandyway’, suggested that Roman sites, which may have been involved with salt production, lay along a sandy levee running north of the creek. One excavation was on the site of the old brewery, another on the site of the King Alfred School’s playing fields. He recorded that the site on which the Lighthouse Inn now stands was once known as ‘Holdbeaches’, possibly a derived from ‘old beaches’.

All of Sam’s work was done at his kitchen table when living at Huish Manor (Sandyway Farm, see below). He himself described his passion as “ the bloody rubbish”. 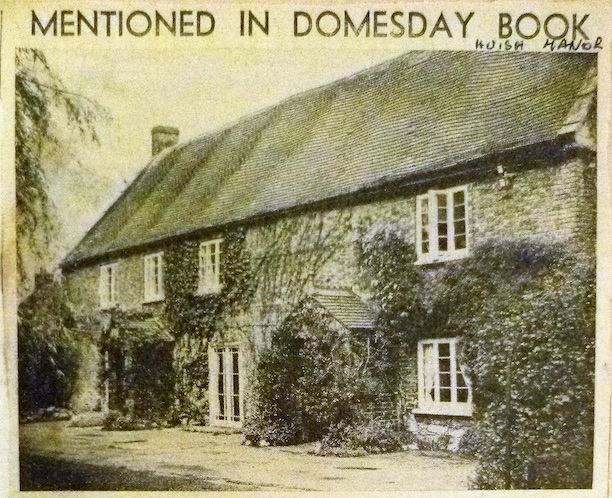 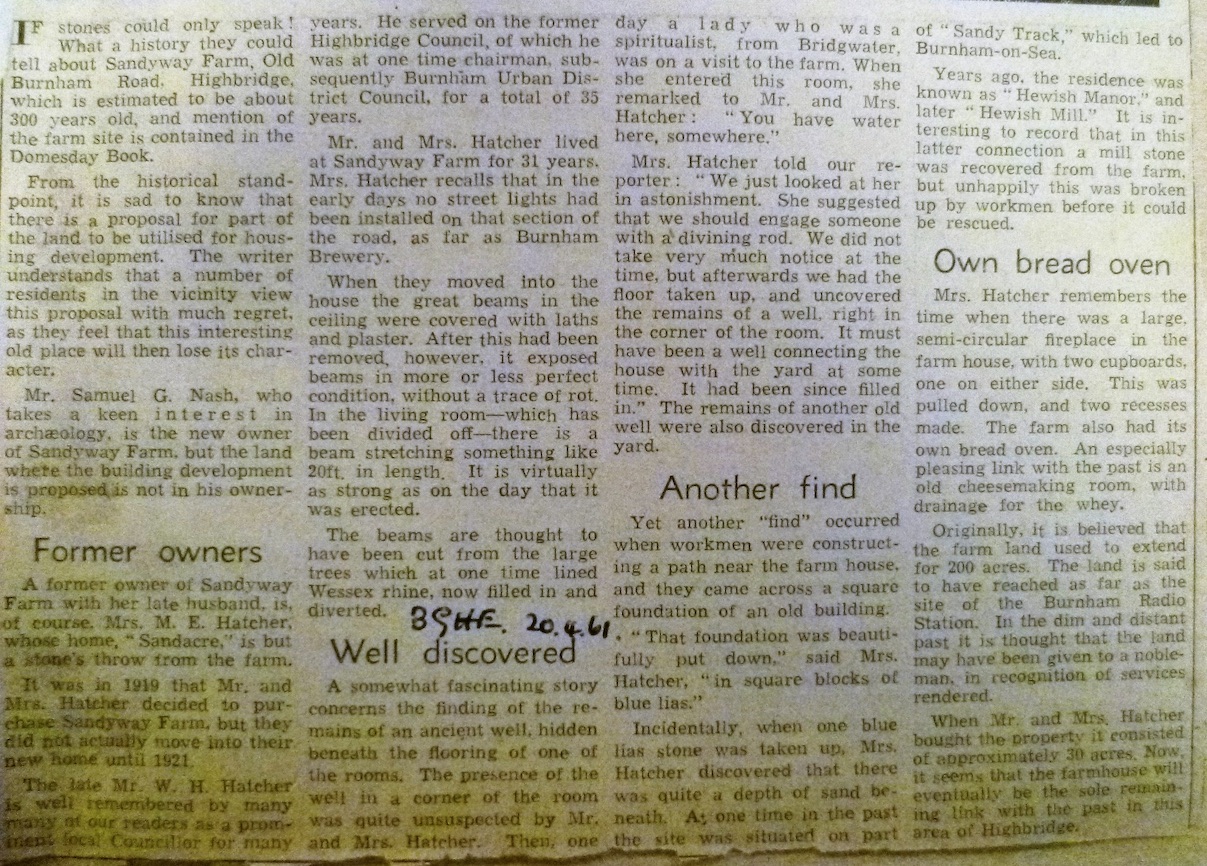 (Above information from article by Stephen Rippon, Dept of History and Archaeology, Exeter University and additional research by Alan Wheway from Sam Nash’s original materials.)

Sam Nash died on 6th April 1985. His obituary in the Burnham Gazette mentioned that he had served St Andrew’s Church as vestry clerk and treasurer for many years and that he left behind him two daughters.