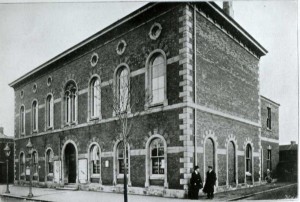 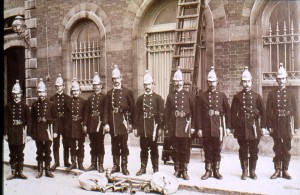 Built at a cost of £2,000 by the Market House and Town Hall Company and opened 6th July 1869, the building was originally surrounded by orchards. A school holiday had been given on the 16th November 1868 for pupils to see the laying of the foundation stone.

The building was originally open on the ground floor at the east end (where the fire engine doors were later installed) for the weekly market. It could also  be used for celebratory dinners, as it was in 1887 for Queen Victoria’s Jubilee.

The Hall was bought by the ratepayers in 1891: the yard behind was included for the use by the council’s refuge collection service. The first meeting of the Burnham Urban District Council took place here on the second Tuesday of January, 1895. Among the Council’s first actions was the formation of a  Lighting Committee and also the Carriage Boat and Bathing Committee. 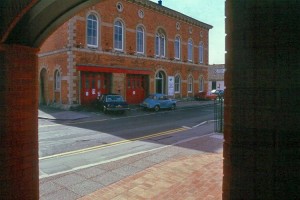 In the late 1920’s the Petty Sessions were moved to Burnham and held here. It was at a crowded meeting in this building in May 1929 that the scheme for the development of the South Esplanade and Marine Lake was overwhelmingly approved by a post-card poll of ratepayers.

From around 1930 the Burnham Fire Service was housed in the east end of this building for many years. Pupils attending the Infant school opposite will recall seeing the engines leaving with their bells ringing.

Discover the next location on the trail: 25. Lifeboat Restaurant