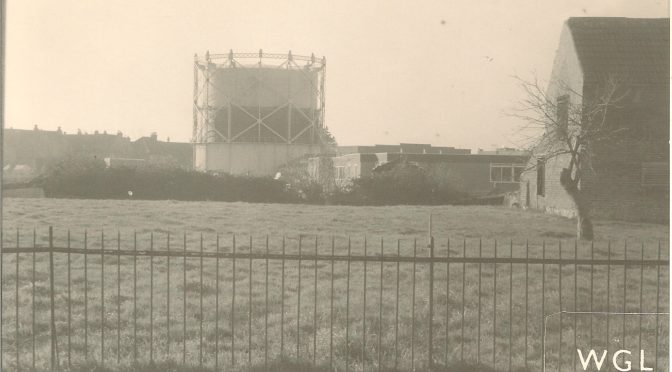 On 6th October 1858 the Bridgwater Mercury and Western Counties’ Herald published an advertisement for sale of shares in the Burnham Gas Company. 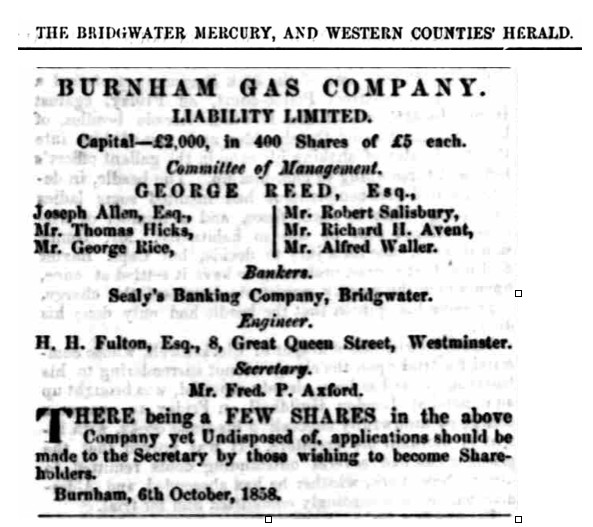 From this it appears that George Reed was chairman of the management committee.

On 12th May 1858 the Bridgwater Mercury had reported that despite nothing much having happened regarding starting of the  building works for some time “we are in a position to be able to state positively that ere long steps will be taken for their immediate commencement and speedy completion. It is computed that the whole scheme can be practicably brought to an issue  at a little over £1,200. Such being the case, no fears need be entertained as to a lack of funds, as the Burnham inhabitants always come forward to meet any emergency when the good or improvement of their beautiful little watering place is concerned.”

An article in the Shepton Mallett Journal on 5th November of the same year describes the laying of the foundation stone. 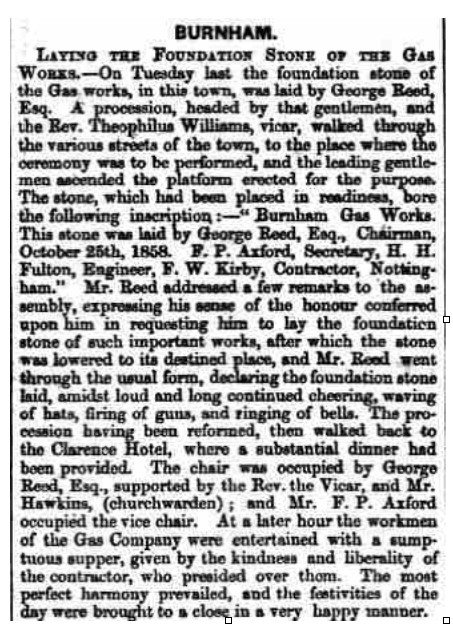 In 1858 the company was also advertising the laying on of supplies to houses:

In 1859 The Bridgwater Mercury reported that George Reed had informed the Local Board of Health  that he had been “deputed by the Gas Company to lay before them a plan on which was marked places for the erection of gas lamps throughout the town, where they thought such lights would be required. He was glad he was so deputed, because he thought the recommendation he had to make  was a satisfactory step in the march of improvement, and likely to considerably aid their united exertions to bring the place up to the position it deserved to occupy……..Thirty-seven lamps were set down but that number had been reduced to 32”

The proposed positions of the lamps was reported to be as follows:

A suggestion was made that a light should be put in Love Lane but Mr Reed stated that the gas pipes did not extend that far at present.

The Western County Herald and Bridgwater Mercury also reported in 1859 on a dispute between the gas Co. and the Local Board of Health: 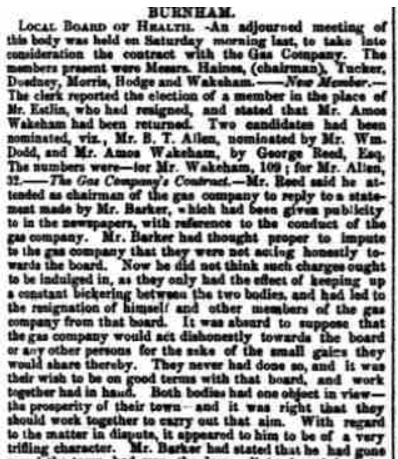 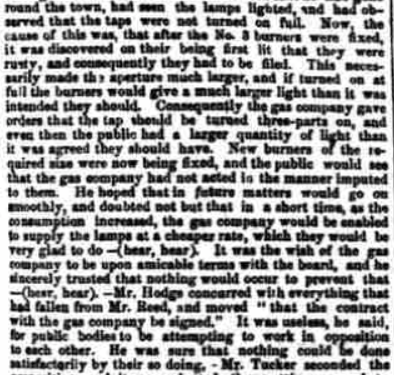 On 28th January 1876 the Bridgwater Mercury reported “In consequence of some misunderstanding between the Local Board of Health and the Gas Company respecting the terms of contract, and especially the period for which the lamps and consumption of gas had been rented, the town was recently left in darkness several evenings. After a public meeting “It was resolved that the Board do renew the offer to rent the lamps and consume the gas upon the same terms as heretofore, for one year only.”

The Western Gazette of Friday 19th December 1884 reported on a meeting of the Local Board of Health:

‘Mr Tucker [a member of the Board] said he wished to hear testimony to the bad quality of the gas supplied by the Burnham Gas Company, and to protest against the high prices charged for it. In the neighbouring town of Highbridge, gas of a better quality was supplied……and he had been informed that if Burnham would take a supply from Highbridge the price would be immediately reduced.’ 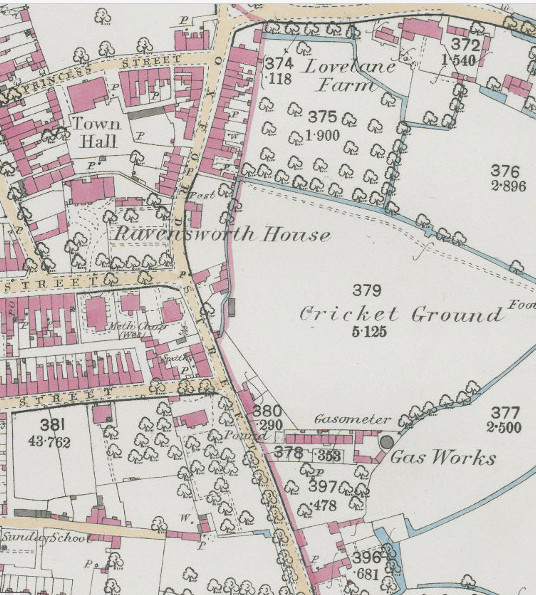 The next map is from o.s. data of 1899-1903. It can be seen that the works have been extended and another larger gasometer has been added. 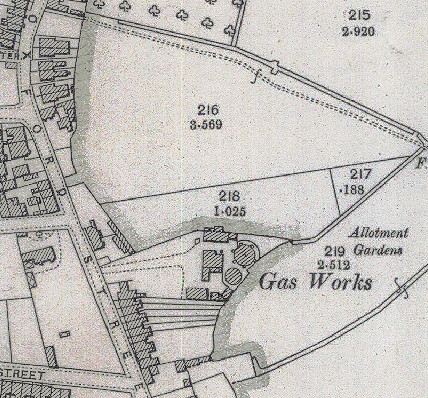 The 1921-43 o.s. data (below) shows much enlargement. The original gasometer is now gone and two much larger ones have been built on the site now occupied by Kingdom Hall and the land behind it. 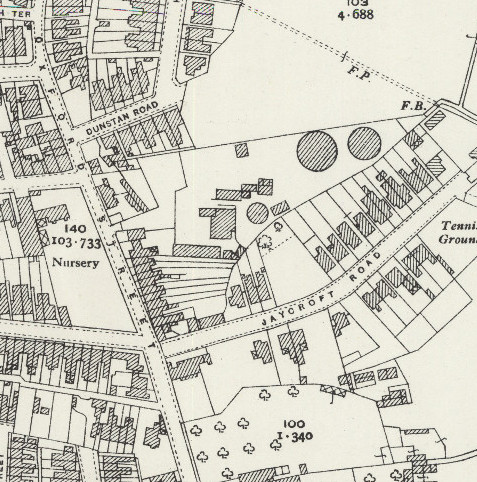 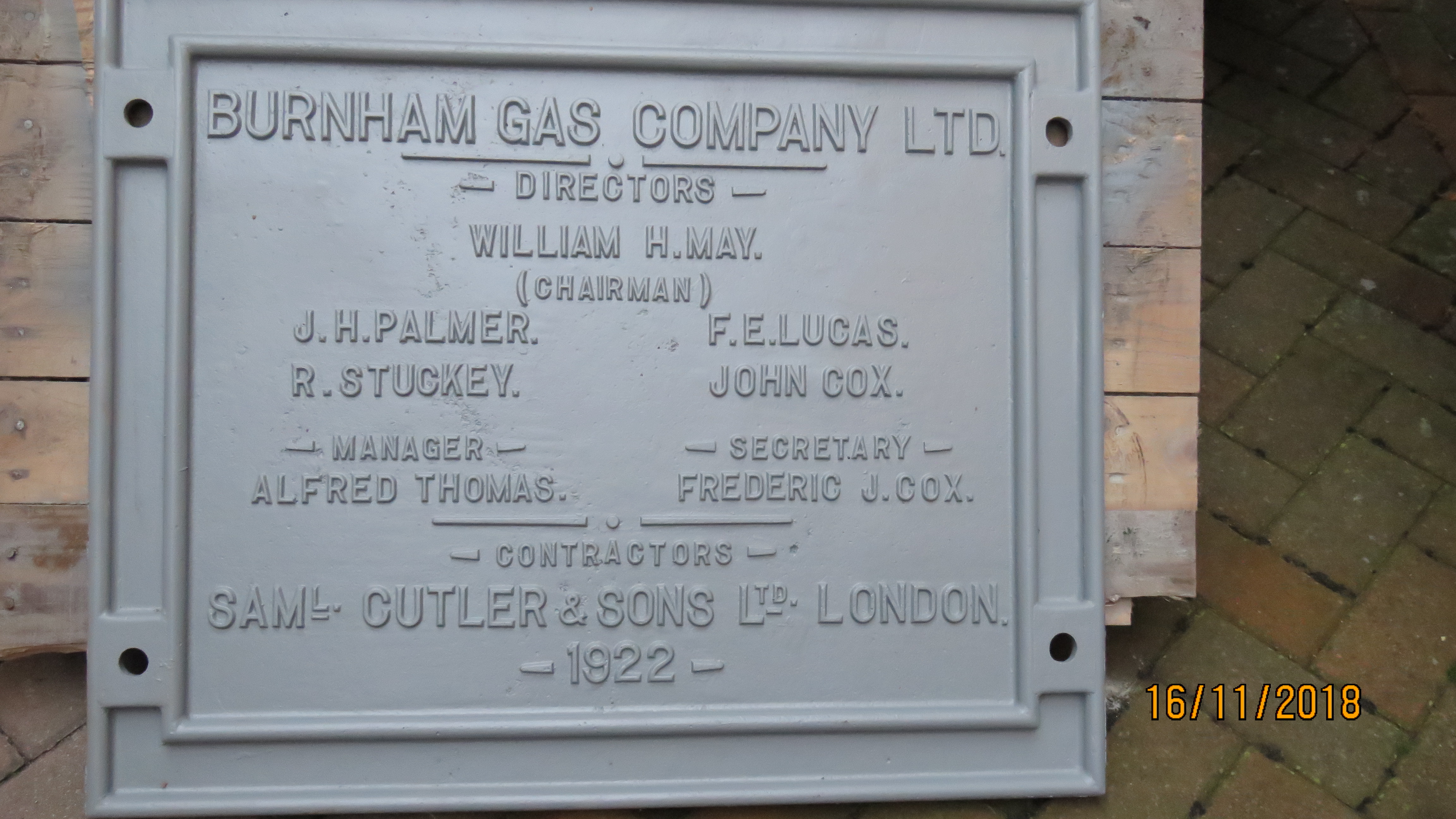 Above is the 1920’s sign from one of the gas holders, which was donated by the family of Mr Lynham, the last manager of the site, who had rescued it during demolition. It is being refurbished with the hope that it can once more be displayed on the site.

Trucks of coal arrived by rail at Lynton Rd. goods yard and the coal was loaded by hand into carts, which were then horse drawn to the works. It seems that sometimes the weight at the weighbridge was found to be short, Burnham residents having acquired a few free lumps of coal en route. After the coal was burned the residual coke  and tar was sold off at the gas works and taken away by barrow and bucket. A pet cremation service was also offered (Information from notes by Evan Strickland).

In 1922 there was a threat of litigation against the Gas Company by residents of Jaycroft Rd. The report below appeared in the Western Daily Press in June of that year. 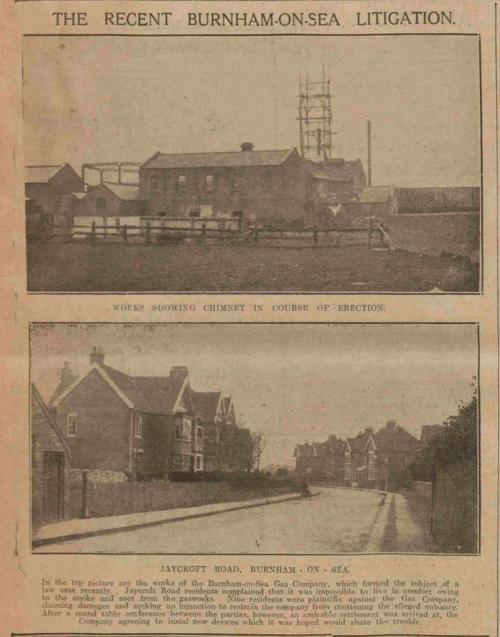 In 1931 the company got into debt and was merged with the Weston-super-Mare Gas Company.

We believe the photo below may be of this flood.

Below is a 1963 picture of the premises next to the gasworks entrance on Oxford St in use as a South Western Gas Board office / showroom, with the company’s summer carnival entry for that year in front. 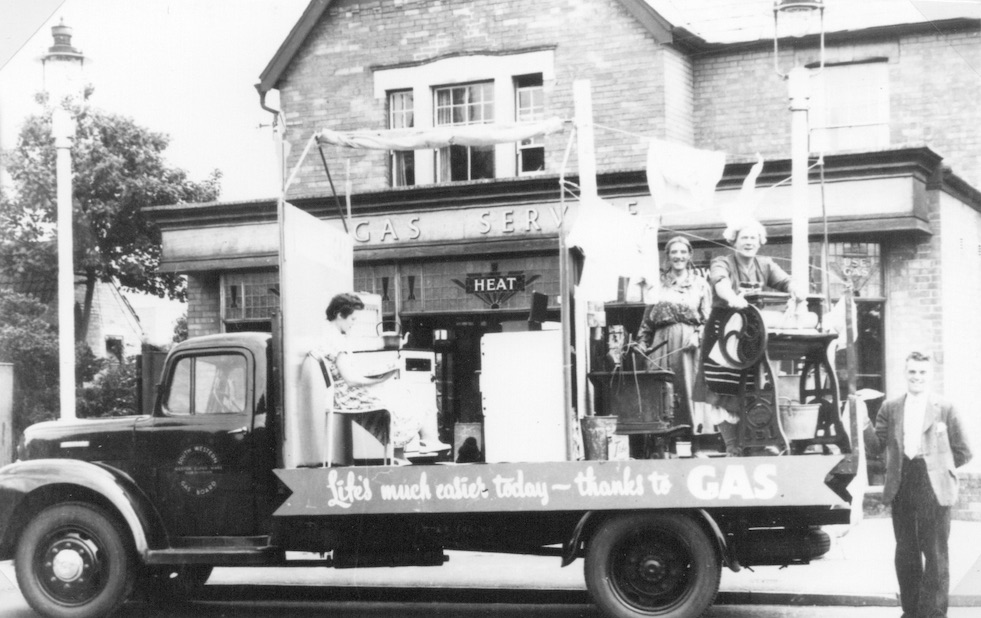 During the 1960’s the Gas Board sold the main part of the site and the Oxford St showroom to Wallbutton’s Garage and it was developed as the Burnham-on-Sea Motor Company.  The Council Depot now stands on part of the land occupied by their workshops.

Behind this is an underground chamber “big enough to hold a double decker bus” which was known to the workers at the Motor Co and believed to be a flood control chamber. However a report in the Western Gazette in 1881 refers to the Local Board seeking an estimate for work, declined by the Gas Company, for “putting the arches of the sewage tanks in a proper state of repair.” It is quite possible, given the Gas Company link, that this refers to this chamber. If it was ever intended for flood control it appears from the article above that it was not up to the job.

Many residents will remember the gasworks and also many visitors will remember seeing the gasometers in the distance on their approach to Burnham down Love Lane. 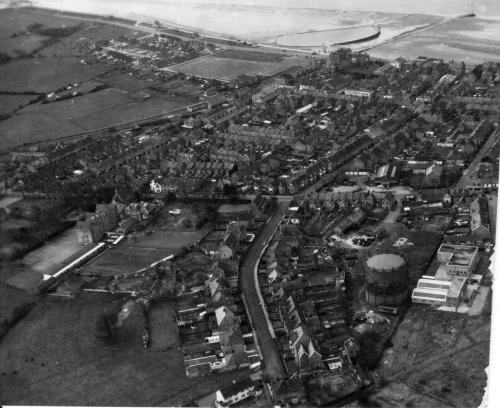 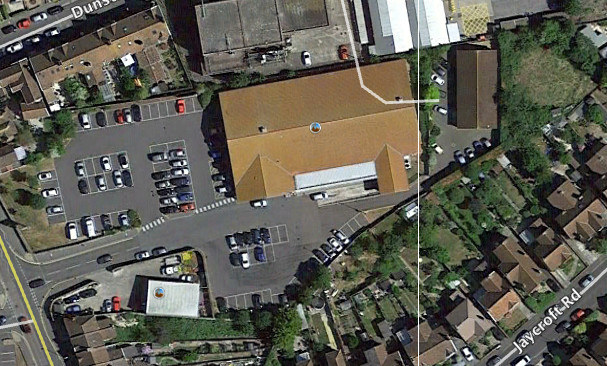 Above are aerial views of the extended site and as it is now, occupied by Lidl. The outline of an old gasometer can still be seen on the land behind Kingdom Hall. 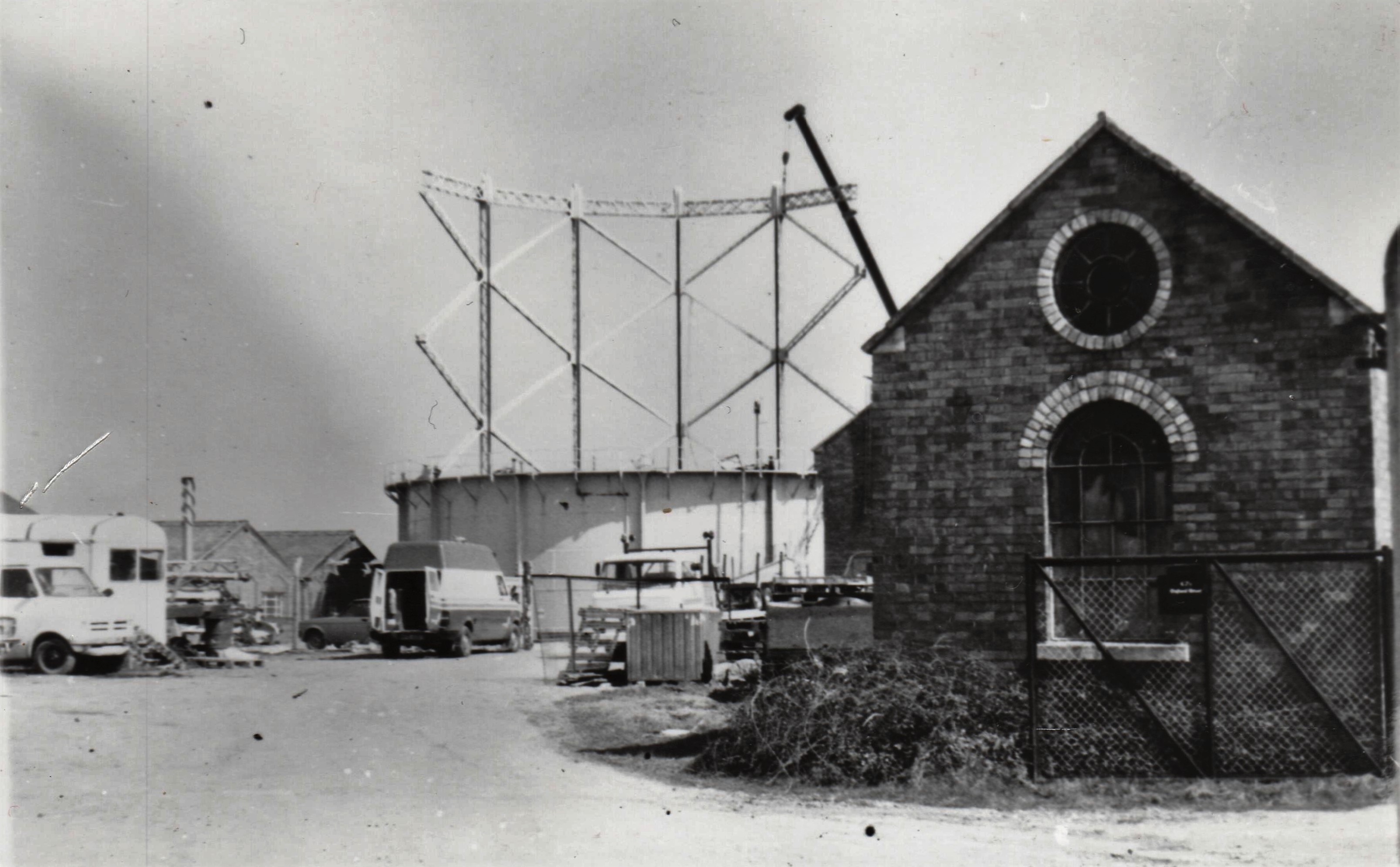 Any recollections or pictures of the gasworks would be welcome.

One thought on “Gas Works”