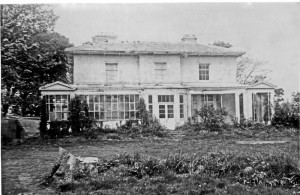 There is a well known and probably spurious story that Tregunter or possibly an earlier house on this site was built or owned by a  chef to King George III (more details here). What we do know is that the site of Tregunter was purchased in about 1843 by John Gunter, a partner in the famous Mayfair confectionery business, Gunters of Berkeley Square, who certainly catered to the upper classes, including Royalty, but later than the reign of George III.  John Gunter demolished an older house, which has been identified as the Roper Farmhouse, replacing it with the house which you see today.  It seems there is some evidence that the older farmhouse may also have been subject to a fire prior to  Gunter buying the site.

Tregunter was John Gunter’s  second home: his principal one was Cole Hill House in Fulham. The Gunter family originated in Wales and are associated with the Welsh town Tregunter , meaning ‘homestead of Gunter’.

Gunter was disgusted by the state of the sewerage and drainage around the house and was instrumental in achieving improvements to these facilities in the Burnham area.

A report in The Bridgewater (sic) Times of 4th February 1847 states: “The parish is much indebted to Mr Gunter for the taste and liberality he has evinced by improving and widening the road and approach to the church at his own cost.”

There is archaeological evidence that the original farmhouse was built on an ancient Roman site. The Tregunter front cellar  appears to have been retained from the old farm building and  dates from the fourteenth century. Some of the stone from the previous building was also used in the construction of the newer one.

There are a number of interconnected cellars below this property and it is said there were once more extensive underground passages leading to the sea front and the old vicarage. Were these connected to the now long gone false tomb in the Churchyard with passages to the trap door of the vicarage building?  Did Burnham once have smugglers? We may never know.

(Thanks due to Francis Farr-Cox for information about John Gunter)

Discover the next location on the trail: 19. Mounting Steps & Stables