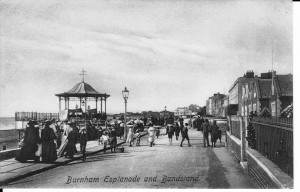 In 1901-2 it was decided to commemorate the coronation of Edward VII by construction of a bandstand & 2 public shelters, each being supported on cast iron columns outside the line of the Esplanade.

When the North Esplanade was widened a new promenade supported on concrete pillars was built out over the old sea wall. Two new shelters replaced the old ones and a short pier was incorporated into the design to support the Pavilion, a steel framed building intended to provide a covered area for a number of public entertainments, with a new bandstand on its forecourt. It is said that for a short while both the Bandstand and the Pavilion stood side by side. Unfortunately no images have been found to support this theory. 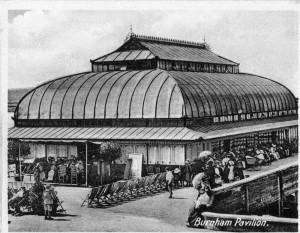 Building work for the new promenade took place between 1911-1914 (click here for a timeline of the Pavilion construction) The St Andrew’s School logbook for 1911 reported: “The noise made by the construction of the new Pavilion  and Esplanade extension opposite the school made concentration by the scholars on their lessons almost impossible” 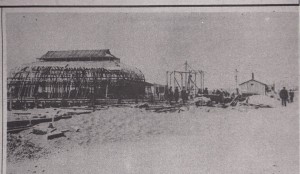 The structure you see today is one of the UK’s oldest illuminated seaside piers and was the first concrete structure of its kind in Europe. When it was first built engineers from around Britain came to marvel at it. Not surprisingly it is claimed to be the shorted pier in Britain.

Read more about the Pavilion here.

Discover the next location on the trail: 7. St. Andrew’s School on the sea front