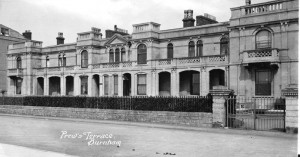 Kinver Terrace was built around 1843 for seaside holiday makers and known then as Prew’s or Pruen’s Terrace. It was the first of the sea front terraces to be built as Burnham expanded in the late 19th century.

There was no Esplanade in the sense that we know it today, just sand dunes; and it is said that when Prew’s Terrace was first built its drains went through the sea wall and straight on to the beach. Not surprisingly the owner of the Clarence Hotel complained that some of his visitors left soon after arriving as they could not stand the smells!

This resulted in the town’s Board of Health ordering that Prew’s owners were not to open their drains onto the beach during daytime.

Discover the next location on the trail: 10. Marine Cove