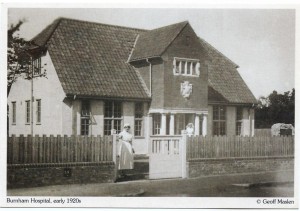 The Hospital was opened on October 4th 1922 by the Marquis of Bath.

The site on which this hospital was built was originally an orchard and during the first World War, some of the larger houses in Burnham had been used as makeshift hospitals. When the war ended it was decided that a hospital would be a fitting and useful memorial to those who lost their lives in the conflict.

Originally there were 2 wards and only two or three beds in each but as early as 1925 the children’s ward was added and also in 1925 an operating theatre was added.

In 1938 a further expansion was the opening of the King George IV coronation extension. 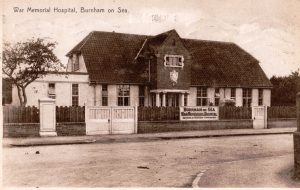 Above: a slightly later photo.

During the Second World War the hospital was used to care for American army personnel stationed in the area. When the war ended and the American soldiers were ordered to bury all their surplus tinned food, knowing of the acute food shortages in Britain the Officer in charge could not being himself to do this. Instead in the middle of the night they brought the supplies to Burnham Hospital and gave them to the Matron. As many of the labels on the tins had been lost patients and staff found themselves eating chilli con carne and other foods which they had never even heard of let alone tasted! 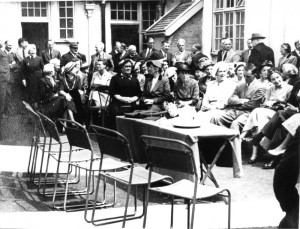 In 1953 the Holmes Memorial Clinic was opened in memory of Dr Holmes who was a well known and loved practitioner at the hospital.

Dr Holmes’ son became one of the founding members of the League of Friends, which was formed in 1966, and continues to raise cash by organising an annual fete which is held each August in the Manor Gardens. Other groups also contribute greatly to the hospital funds by provided refreshments for visitors and patients and also in holding coffee mornings.

A short archive film from the Norman Gobey collection, originally filmed on 9.5mm.

Discover the next location on the trail: 18. Tregunter