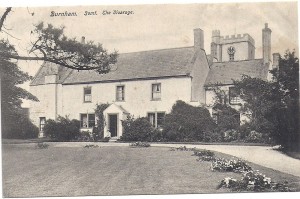 The Vicarage at Burnham for St Andrew’s parish.

The Old Vicarage has not been occupied by any ecclesiastical body for many years.

There is evidence that the current building dates from the 17th century. A document of 1623 mentions a mansion or dwelling house adjoining the churchyard.  Before that time the Vicar was probably accommodated in a parishioner’s residence. There are references to a ‘vicarage’ in the 14th century but these may mean to ‘vicarage’ as in the earlier sense of the ‘jurisdiction’ of a vicar.

“There are in the vicaridge howse, a hall, a kitchen, a butterie, a milke howse, and a little roume to Wash and fower chambers. The glebe is only a portion of land from the East end of the Churchowse reaching neare to the sea on the west, on the south of the vicaridge a parcell of land called Griges Bower, and so – reaching and abutting on the parsonage land, and the northwest corner of the churchyard”

It is thought that the later building standing on Victoria Street at the eastern end of the Vicarage  was once the carriage house .

In 1914 the incumbent, Revd. Prebendary Roger Hayes Robinson, wrote to the Bishop of Bath and Wells asking that the building be condemned, demolished and the land sold. However it appears that the reply was negative. It may be that the building ceased to be used as a vicarage shortly after this time. 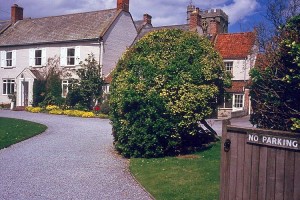 See information about the Old Vicarage as a guest house here

Discover the next location on the trail: 22. Lifeboat Pavilion