Construction of the South Esplanade and Marine Lake was started with a grant from the Government to the Urban District Council, around 1929, to combat unemployment and encourage Holiday Makers. The ‘Marine Lake’ a sea water swimming pool and boating lake was constructed on the site of the original Jetty tidal pool works (see Jetty trail point).

Prior to this at around 1912 there had been changing rooms near the head of the jetty used by local swimming club when tide came in. 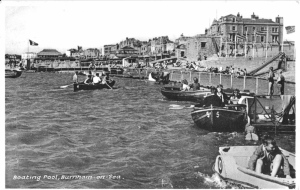 A self-contained site, with paid admission, the Marine Lake enabled safer swimming for a time and it became a major holiday attraction in the town.  Unfortunately the old problem of silting and erosion continued, causing safety problems and the lake never returned to its original level of usage after its closure during the war. Eventually the structure became unsafe and fell into decay. It was not finally demolished until the 1980’s, debris still continues to emerge from the sand and mud from time to time. 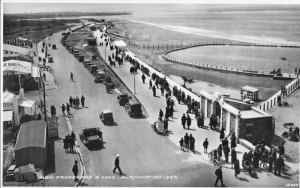 Enjoy this short film of one family’s holiday in Burnham and see if it brings back memories for you!

Discover the next location on the trail: 3. The Reed’s Arms