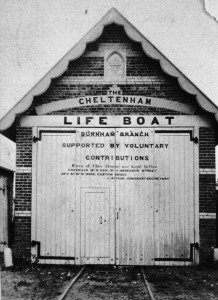 Burnham’s first lifeboat was given by Sir Peregrine Acland to the Corporation of Bridgwater in 1836. This boat was first stored near the Wooden Lighthouse  on land  near to and belonging to the Royal Clarence Hotel. It was replaced by a new boat in 1847.

In 1866 the RNLI took over the service from the Bridgwater Harbour Trust. A new boat, The ‘Cheltenham’, was provided, paid for by that town. The boat was some 35 feet long, a standard self-righter, with ten oars and carrying a crew of twelve. At about the same time a new boat house was built, but this was replaced by a newer building in 1874 next to the railway station. A siding was laid to the boat house and the boat on its carriage was hauled down the track by horses to the slipway. It has been said that small boys could earn tips by helping pull it back up the jetty [Wrigley].

The ‘Cheltenham’ was replaced by the ‘John Godfrey Morris’ in 1887. One of its best-known rescues was that of the crew of SS Nornen in March 1897, the remains of the wreck of which can still be seen on Berrow beach.

The ‘Philip Beach’ replaced the ‘John Godfrey Morris’ in 1902. The building was closed as a boathouse in 1930, purchased by Mr Venn and given to the boy scouts for their HQ. After many years serving this purpose it briefly became a children’s play centre and then a restaurant. 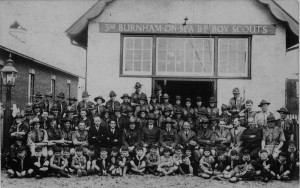 Discover the first location on the trail: no. 1 Burnham Railway Station