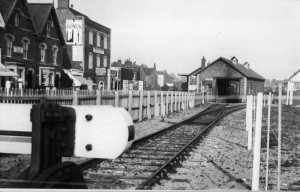 The station, situated at the junction of Marine Drive, Pier Street and Abingdon Street, was a terminus of the Burnham branch of the Somerset and Dorset Joint Railway. It opened 3 May 1858. An extension line allowed trains to travel to the top of the jetty on the sea front. Rail lines also ran down the jetty but the jetty’s down gradient of 1 in 23 required that only rolling stock could use it by being lowered via wire ropes attached to an engine from the top of the jetty. There was a grand scheme to link sea travel with the railway ( see Jetty trail point).

Find out about George Reed and his involvement with the railway and ferry service here.

For a few years the railway operated steamers across the Bristol Channel to Wales. Railway operations to the jetty ceased in 1888 with the last steamer coming to Burnham in 1906.

With the growing popularity of the town as a destination for day trips as well the institution of Bank Holidays in 1871,  more people were coming by train. This meant longer passenger trains resulting in one platform being too short for some passengers to alight from their carriages. So, a second, longer, ‘excursion’ platform was built which started in line with the front of the original station building and extended to a point opposite the bend in Lynton Rd. The grass verge on the South side of Marine Drive is all that is left of the excursion platform, although the line of the platform ramp can still be seen on the wall of the old lifeboat building. 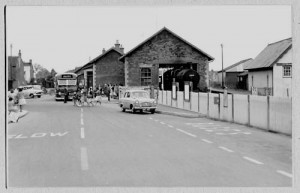 Burnham-on-Sea station closed when regular passenger services were curtailed at Highbridge on the 29 October 1951. Excursion traffic continued until 8 September 1962.

The coal yard and foundations of the station buildings are under Marine Drive and the Lynton Rd car park. The adjacent pub on the High Street recalls the Somerset & Dorset railway in its name.

Watch Highbridge resident Desmond ‘Peter’ Dyer recall his days on the GWR and the adjoining SDJR, which journeyed on into Burnham.

Click for more pictures of the Burnham Railway now & then

Discover the next location on the trail: 2. South Esplanade & Marine Lake